In an unexpected turn of events, two days after our studio visit with architect Arno Brandlhuber, we had the occasion to visit one of his much lauded built projects: the so-called ‘Anti-Villa’ on the shores of Krampnitzsee in Potsdam. The multi-purpose concrete complex fittingly houses the studio of artist and sculptor Björn Dahlem. 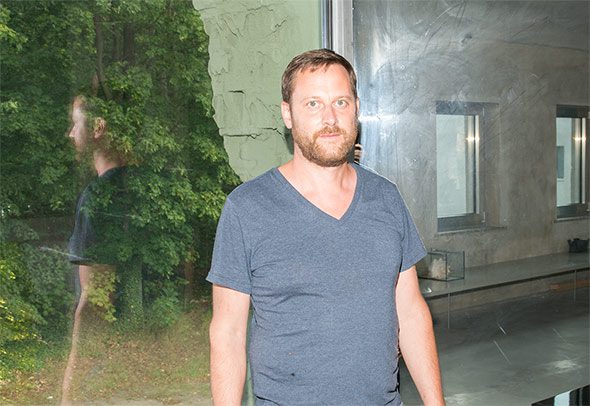 This was not the only overlap between Dahlem and Brandlhuber, who have back-to-back shows in the main exhibition hall at the Berlinische Galerie this year. Dahlem had just packed up his show ‘Mare Lunaris’ when we met, and many of his works were scattered around the studio. But the main focus for Dahlem and his assistants that day was a piece for abc – art berlin contemporary: an oblong, galaxy-like construction made of carefully connected wooden sticks. 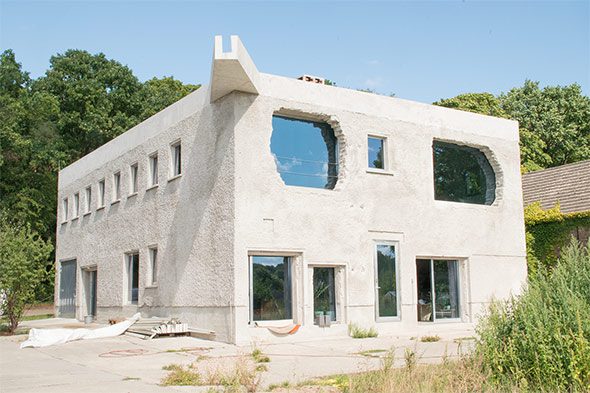 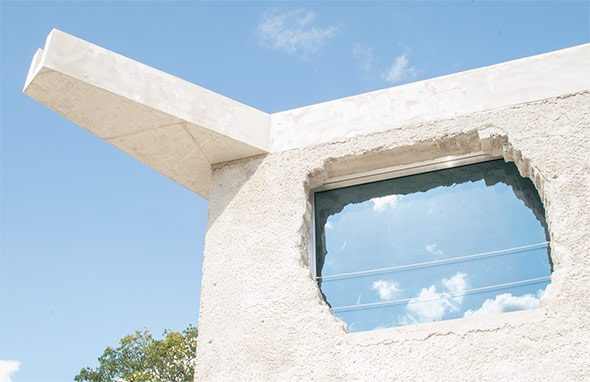 The front wall inside Dahlem’s studio is lined with fish tanks. Most of his projects take on a clear dimension of outer-space exploration or astrophysics, but the artist seems equally fascinated by the deep sea. These worldly – yet somehow otherworldly – extremes are recurring themes and sometimes intertwine in his work. The galaxy piece Dahlem is creating for the Galerie Guido W. Baudach booth at abc took its inspiration from the polygonal geometry visible in a chunk of coral that he has on-hand in the studio. Dahlem became visibly animated when he spoke about the complex patterns occurring in the coral, and in nature more generally. As an artist, he strives to emulate these patterns – not with scientific or mathematical precision, but with the human element of error and contingency that gives his objects their aesthetic currency.

A past work – ‘Schaum’ (2012) – with a similar concept, this time echoing the natural patterns of sea foam, was completed with the addition of a Venus figure: a reference to the myth of her birth out of the sea. Dahlem openly toys with the idea of including her once more in this current piece, but questions how much kitsch is too much. To his credit, his sculptures always appear elegant and subtle, despite largely being made up of found objects. 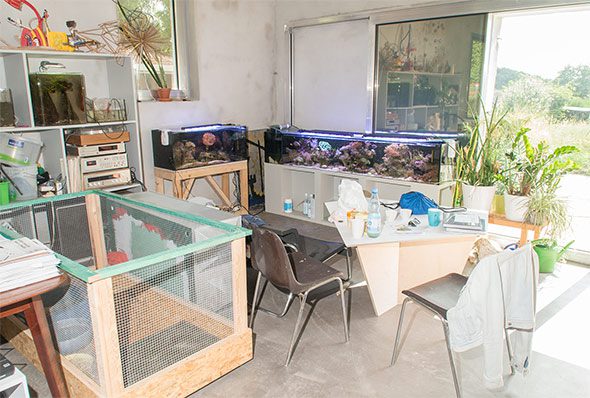 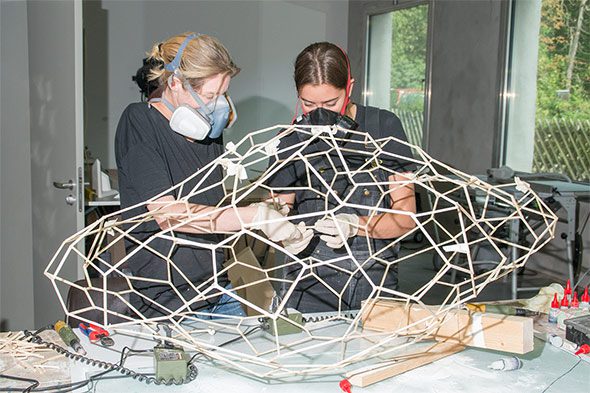 The top floor of Brandlhuber’s ‘Anti-Villa’ has, ironically, a very villa-like interior, which includes one of Dahlem’s tasteful sculptures, encased in a vitrine. The piece refers to the development of stars and their conversion from suns into red giants and ultimately into black holes, with each sun made of a different found object: a styrofoam globe, a browned and shriveled lemon, a shattered-glass decorative bulb, and a small velvet sphere the size of a ping pong ball. There’s a remarkable congruity between Dahlem’s works and Brandlhuber’s stark modernist buildings, perfect for exhibiting art. This congruity might also explain why Dahlem’s sculptures were paired with the recent ‘Radically Modern: Urban Planning and Architecture in 1960s Berlin’ exhibition at Berlinische Galerie. The sculptures radiate a similar retro-futuristic idea of space, both urban and extraterrestrial, as the drawings and models in ‘Radically Modern’. We discussed Dahlem’s fascination with spaceship iconography, which he pinpoints as characteristic of an earlier period in his career. Seeing his spaceship in the context of the ‘Mare Lunaris’ show, however, he gained a renewed appreciation for the appeal of its form. 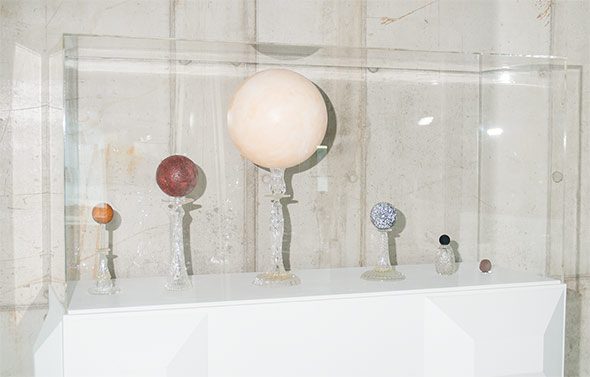 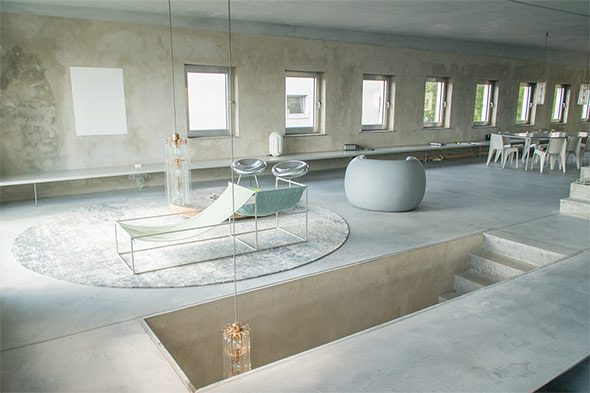 In general, Dahlem’s working philosophy contradicts the push towards mass production characteristic of modernism and he playfully mocks the ‘Ornament-is-crime’ principles of Adolf Loos and his followers. Nevertheless, his works are perfect complements to those very spaces and ideas and despite being all-too-human they gesture towards the borderlands of our world that, even today, remain to be comprehended. 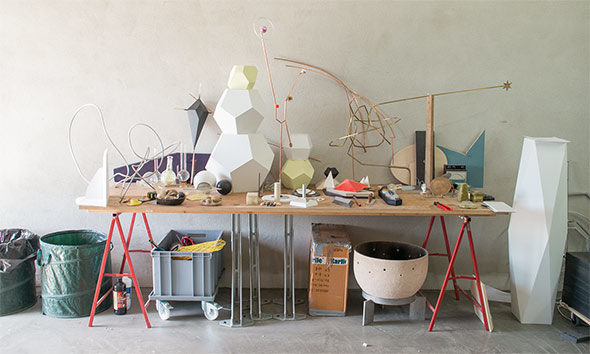 Dahlem moved, along with his studio, from Berlin to Potsdam, and the tranquility of his relatively new location seems ideal for concentration. The artist and his team are gearing up for a busy season of art fairs and exhibitions, notably in Tokyo at Hiromi Yoshii Gallery and at Heinrich Erhardt Gallery in Madrid. Dahlem has been to Japan around 15 times and, as we conclude the visit with a quick look at Brandlhuber’s specially designed backyard guesthouse, he remarks that the minimalist aesthetic resembles traditional Japanese interiors. Contrary to this, Dahlem’s studio is decidedly busy with activity and the clutter of a person in high gear, with models and sketches of upcoming projects waiting in the wings.