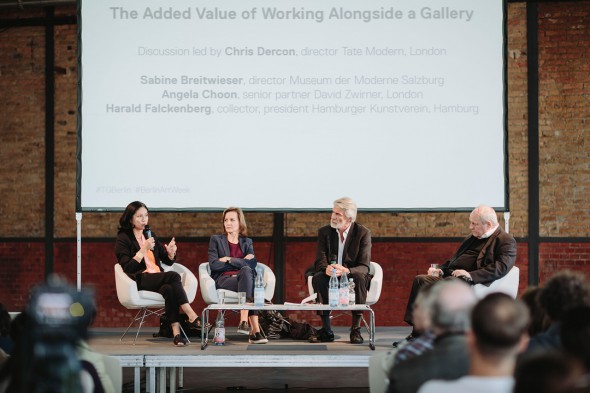 Berlin Art Week partnered with Talking Galleries this year to produce two lectures on the contemporary role of galleries in the art world. The first panel on Friday, September 18th, was titled “The Added Value of Working Alongside a Gallery” and was moderated by the director of the Tate Modern, and soon to be director of the Volksbühne, Chris Dercon. The second panel, “How to Grow with your Artists? Different Gallery Models” was moderated by Chus Martinez and was held on September 19th.

I only attended the first discussion with Dercon, who was lively and fashionably charismatic, questioning, chiding, and provoking the three speakers, Sabine Breitwieser, Angela Choon, and Harald Falckenberg. Breitwieser is the Director of the Museum der Moderne Salzburg, Choon is a senior partner at David Zwirner, and Falckenberg is the president of the Hamburger Kunstverein. 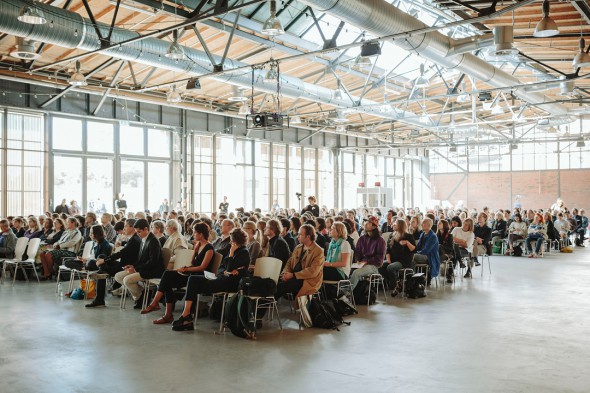 The talk promised to discuss how galleries are hugely influenced by the art market but also play a significant role in shaping that market and determining new trends, what Falckenberg later called determining the “primary art market”. In many ways, contemporary galleries do not just mediate the flow of art between artist and public, but also shape and produce cultural capital and set it in motion. 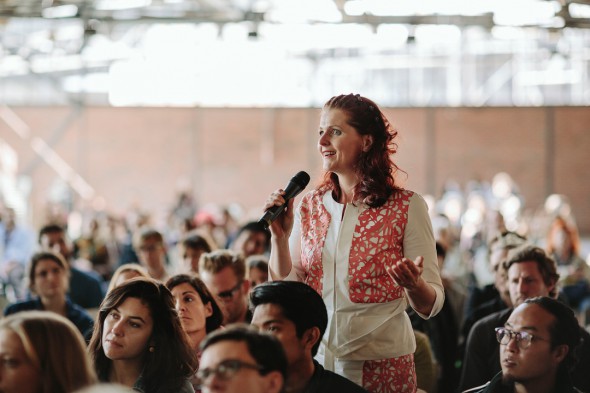 The topic is riddled with controversy. As cultural bureaucrats, gallery owners and collectors rarely have a good image in the art community, though it is clear contemporary art could not function without them. Clearly, the three speakers were well aware of this and the talk took off from an instantly defensive position. Even when asked to simply explain their roles, the speakers seemed to feel the need to justify themselves. At one point Breitwieser even blurted out that ‘galleries are not something bad’ which was surprising because nobody in the discussion had accused them of being so. It seemed impossible to get even a mildly critical or self-reflective comment from any of them, with the exception of Falckenberg, who managed to denounce certain forms of art trading and cultural institutions while excluding himself and the Kunstverein from this critique. Overall, it appeared like only Dercon and Falkenberg were aware of their own positions in the circulation of culture, while the other two seemed confused by the questions. While I did not expect some sort of weepy confessional, it would have been more helpful if the speakers were willing to critically reflect on their own roles and values, the good as well as the bad, since this could have led to a more productive discussion about the ways in which galleries could be of more value to their artists. Dercon seemed composed and willing to discuss the positive and negative role of galleries in the exhibition and distribution of art. However, I found his critical questions superficial, not addressing glaring issues. For instance, why it is that art deals are inevitably accompanied with exorbitant dinners, or how problematic it is that individual gallery owners and collectors play a massive role in determining the art that will enter into cultural history.

The talk seemed overall lacking in critical depth, and uninformative. This is unfortunate because a real, open discussion with galleries about how they imagine themselves and the role they play would be very helpful for the art world. Gallery owners are rarely asked these sorts of questions – it would have been very interesting to see what they actually think.