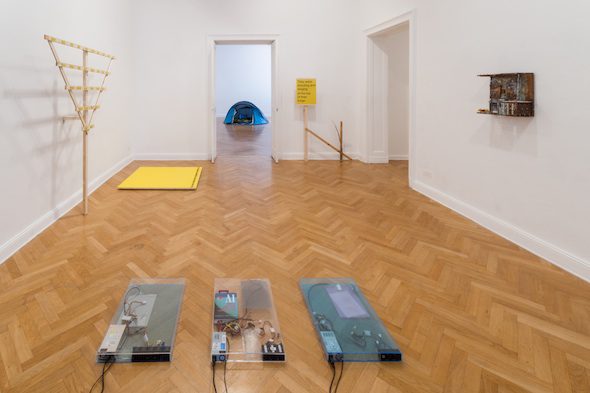 Abjection in the information age is rooted in a distrust of communication and information dissemination, a fear of infinite possibilities, alienation in a digital world, and a mourning for authenticity. Abjects is the latest exhibition at Import Projects, a group show featuring Eloise Bonneviot, Emily Jones, Paul Kneale, Yuri Pattison, and Andrew Norman Wilson. Curator Franziska Wildförster introduces the theme with Julia Kristeva’s 1980 essay on abjection. Where Kristeva locates abjection in the mechanisms of revulsion and disgust when confronted with death, violence, and decay, Wildförster proposes a contemporary equivalent as anxiety induced by the mechanisms and mediations of a digital economy.

Where one might expect an exhibition concerning the information age to present works mostly utilising digital and post-net aesthetics, Abjects compiles a surprising range of mediums and artistic approaches. The first of which, as you enter the gallery, is a typed and printed letter by artist Andrew Norman Wilson, addressed to the Bill and Melinda Gates Foundation. In his letter, Wilson takes issue with the human-favouring rhetoric around the effort to solve global health issues, in particular reducing malaria transmission from mosquitoes, a mantle taken on by the Gates’ Foundation. Wilson presents an ironically straightforward resolution to the inequality of man versus insect: we submit to a fate of mosquito-transmitted disease and live in an underground industrial wasteland to be fed upon. An architectural model of “Global Mosquito City Proposal” (2015) in the next room illuminates Wilson’s proposal. Two figures, mid-intercourse on a sheetless mattress, live in a rusty shell of a desktop computer hard drive, like a dystopian vision from science-fiction, complete with a poster-like image of their new insect overlord looming over them. The work, though amusing, channels a mortal vulnerability felt in fear of biological threats to life that technology has not yet provided a solution for. Addressing his letter to Gates – who can serve as a proxy for all global corporations – Wilson is aligning this corporeal fear with a feeling generated by the dominance of transnational big business and the infinite electronic waste our digital world creates. 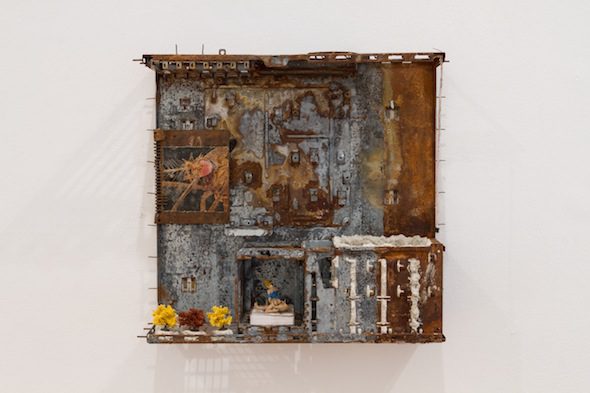 Yuri Pattison’s sculptural installation also links to Wildförster’s concept of abjection through a critique of modern corporate operations. Five acrylic boxes, housing cooling fans, computer wires, books on artificial intelligence, Amazon.com packaging, and other electronic and literary parts, are mounted on the floor and walls. In dialogue with the video work “outsourced views, visual economies” (2013), he questions the transparency of corporate enterprises and the nature of a digital labour market. The video work compiles views from the windows of global workers of Amazon’s Mechanical Turk – a crowdsourcing internet marketplace that coordinates the outsourcing of labour that, as yet, computers cannot perform. The interface of the network promotes anonymity, creating an invisible workforce operating on the surface like online software. The transparency and contents of Pattison’s floor and wall sculptures metaphorically perform the objective of the video, to give visibility to the individuals and the mechanics behind the Amazon service. The A.I. titles inside the cases support a reference to ‘artificial artificial intelligence’, a term coined for Mechanical Turk workers that reinforces the dehumanising impact of the network’s mechanics and the nature of the monotonous work, and of the outsourced digital labour force in general. 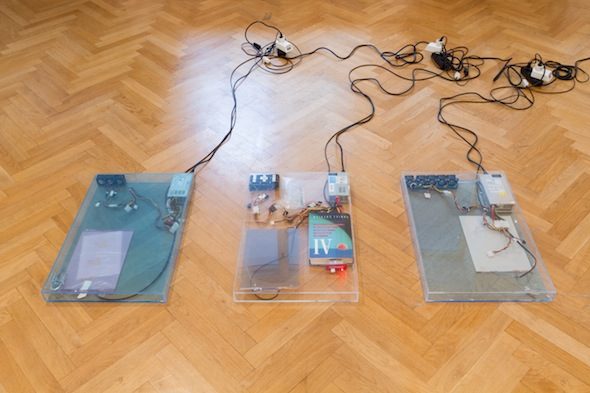 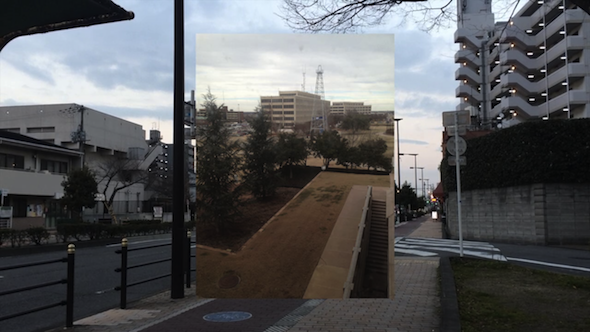 Eloise Bonneviot‘s project “Thinking Like a Mountain – Limited” (2015) delivers the internet based New Aesthetic you expect to see in an exhibition about the internet age. Inside a pop-up tent on the gallery floor is a sleeping bag, a pile of energy supplement bars, and a laptop featuring the Think Like a Mountain video game. The first person shooter-style game works as an interactive archive for mountain accident data, where players traverse a misty alien landscape with glowing mask-like faces dotted across the horizon like ancient monoliths. The faces are portals into other landscapes where the accident data is hidden. My turn on the game began (and ended) stuck in a dark pixelated rocky crevice. At home, I gave the game another go online, managing to find some of the climbing equipment icons that revealed the data: containing weather conditions, terrain, and accident details in sporadic lists like abstract poems. This information delivery resists the linear narrative of the media´s typical stories of trauma, though it replaces one form of mediation with another. The player experiences accounts of trauma, mediated through the game, and further through the consumer objects tied to the accidents – a caribina, rope, pulleys, a head torch, a parachute. The abjection present in Thinking Like a Mountain is tied to the notion of an inauthentic mediated life, ever present in consumer culture and the contemporary shift to predominantly online communication, and digitised experiences of nature. 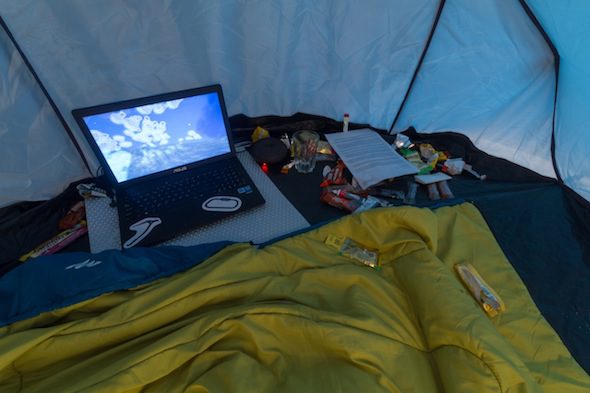 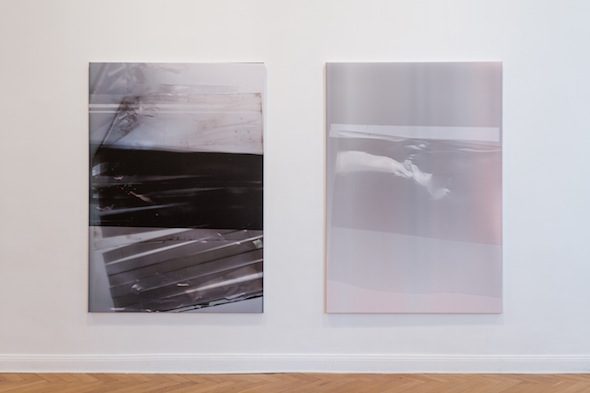 The large inkjet images on canvas by Paul Kneale relate to notions of abjection in the digital world more indirectly than the other works. The canvases look like abstract images, while they are in fact photographs made with a scanner with the lid open, capturing waves of light, reflection, and space the eye does not see. The scanner paintings materialise the immaterial. Disembodied information is an unfathomable and disturbing concept for the majority trying to comprehend the seemingly limitless possibilities of online data and nanotechnology. Kneale’s works perform a tangibility that is comforting. Emily Jones’s wooden sculptures, titled “The Draining of the Mesopotamian Marshes of Iraq” (2015), seem the least referential of specifically contemporary mechanisms and circumstances of an information age, and summon an abjection rooted in physical violence and suffering. The title refers to the draining of the Iraqi Marshes which began in the 1950s, for land reclamation, and later in the 90s to evict Shia Muslims from the marshes. The text, in black on yellow reminiscent of danger signs, evokes protest banners and wartime slogans. The written (or typed) word is a preoccupation in Jones’ works, always posing questions around communication and understanding, about signifiers of meaning and mediated information. The signs stand in for a physical environment, relating in this way to the mediated experience of nature present in Bonneviot’s game. Her historical reference also brings up ideas of ownership, in this case of nature, but for the purpose of the exhibition can parallel complicated issues of digital information ownership, where both nature and public information are controlled by governments and corporations. 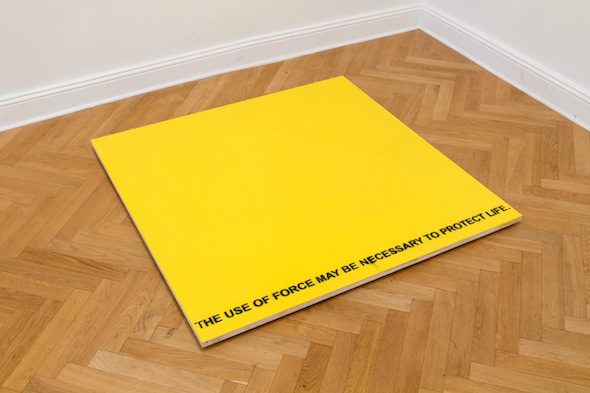 Emily Jones, “The Draining of the Mesopotamian Marshes of Iraq” (2015), installation view; Photograph by Benjamin Busch for Import Projects 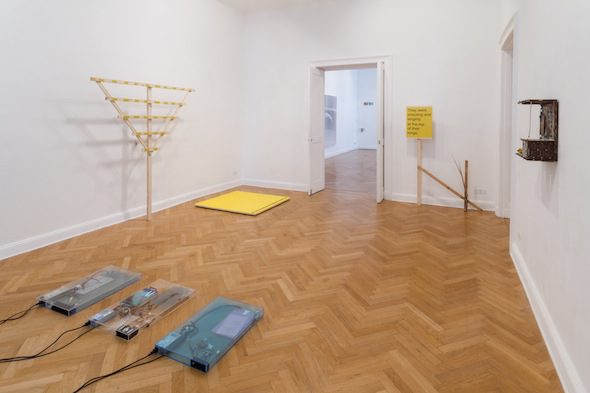 Multiple works by one artist are spread across the exhibition, criss-crossing and interweaving references, materials, and stories like channels of an invisible network speaking to and over one another, where some connections are louder than others. Abjects is an assortment of facets of the contemporary human condition, conditions of fear, anxiety, vulnerability, and distrust. These conditions are performed through the works by utilizing or rejecting the tools of the agencies targeted, in a mixture of literal, referential, or indirect approaches. The exhibition appeals to current tendencies towards questioning the authenticity and transparency of the structures and instruments of our digital economy, and presents the choice: to resist or give in to abjection.