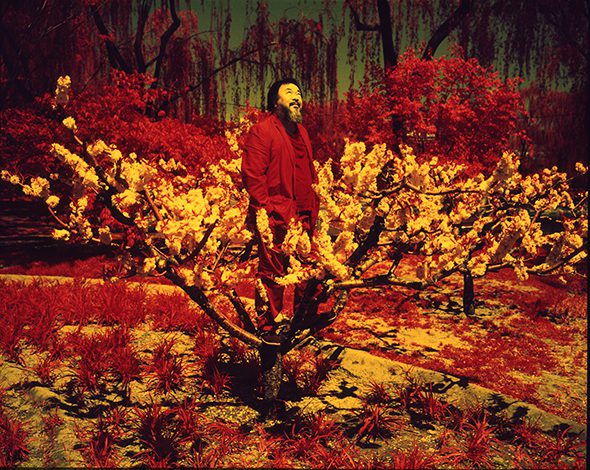 The space of internet and communications technologies is divided between two contradictory social experiences: one is the sense of increasing alienation and loneliness that is felt by a hyper-networked society, and the other is the genuine honesty and freedom of expression that emerges from within the safe anonymity of the internet. What Jacob Appelbaum’s exhibition Samizdata: Evidence of Conspiracy shows is how both these trends are not absolutely true: meaningful friendships can be built around and through digital media, and the internet is actually a highly policed and scrutinized space. His exhibition at NOME reveals a remarkable network of digital media activists who have developed a unique and intimate friendship through their efforts to protect the privacy of the internet as well as human freedom and dignity in a new political medium.

The exhibition shows eight photographs of people who can only be called heroes in the field – Ai Weiwei, Laura Poitras, Glenn Greenwald with David Miranda, Julian Assange, Sarah Harrison and William Binney. There are also two installations in the exhibition. In ‘P2P (Panda to Panda)’ Appelbaum collaborated with Ai Weiwei to stuff plush panda bears with shredded NSA documents in order to smuggle them across borders and also to smuggle these documents into museums as cultural artifacts. The second installation is ‘Scham, Schuld, und Angst’, small vials containing shredded bits of unredacted and classified documents have been made into necklaces. The documents are journalistic material from Edward Snowden‘s leaks that Appelbaum and other journalists chose not to disclose to the world as it would constitute a real threat for national security. 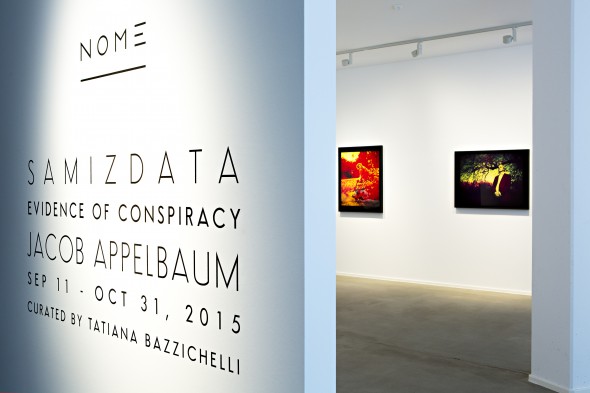 Appelbaum is a Renaissance man of the Information Age. He is a journalist, privacy activist, artist, a hacker who has been involved in highly subversive work like representing and promoting the Tor Project, representing Wikileaks, filtering the top secret documents released by Edward Snowden to determine which are safe for publication, as well as appearing in Poitras’ documentary ‘Citizenfour’, he is an active member of the hacker and activist group Cult of the Dead Cow, co-founder of the collective Noisebridge, as well as a contributor of varying degrees to Kink.com, Greenpeace, Ruckus Society, Rainforest Action Net, and monochrom, among others. 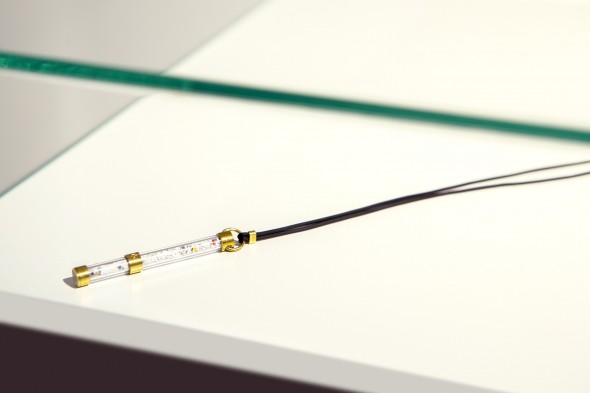 Having lived under surveillance for something over a decade, every digital pixel Appelbaum touches is threatened with being watched and analyzed. So with a tragi-comic irony, Appelbaum uses color infrared photography, originally developed for aerial surveillance since the process could detect camouflaged objects and people, in order to protect his own friendships from surveillance. The photographic process that Appelbaum used in order to photograph and print the images is entirely analog; a rare thing as the world’s last remaining supplies of both the cibachrome printing paper and the infrared photographic film are soon to be used up. Appelbaum has been using his remaining amount of film in order to take photographs of his friends in the past years.

While Appelbaum’s repertoire of activities could put most people to shame, he comes across with a humility that pervades and even clouds the entire exhibition. His photographs focus on celebrating people whose work he respects, all friends of his, and also acknowledging his own inability to do more. This position of humility is remarkable and simultaneously frustrating, since it seems the place of art to celebrate accomplishments not play them down.

The photos situate the whistle-blowing, information tech heroes in simple everyday scenes in an effort to make the personas more relatable to the audience. This is particularly revealing of the state of contemporary heroism: while heroes in previous ages are openly celebrated, heroes in the new virtual political space need to be humbled and made more accessible to people. One reason for this is that these people don’t take the shape of the traditional heroic figure: they are hackers, appearing as nerdy, intelligent types who fight for freedom with computer files, smuggling documents through airports, armed with legal cases and news reports. 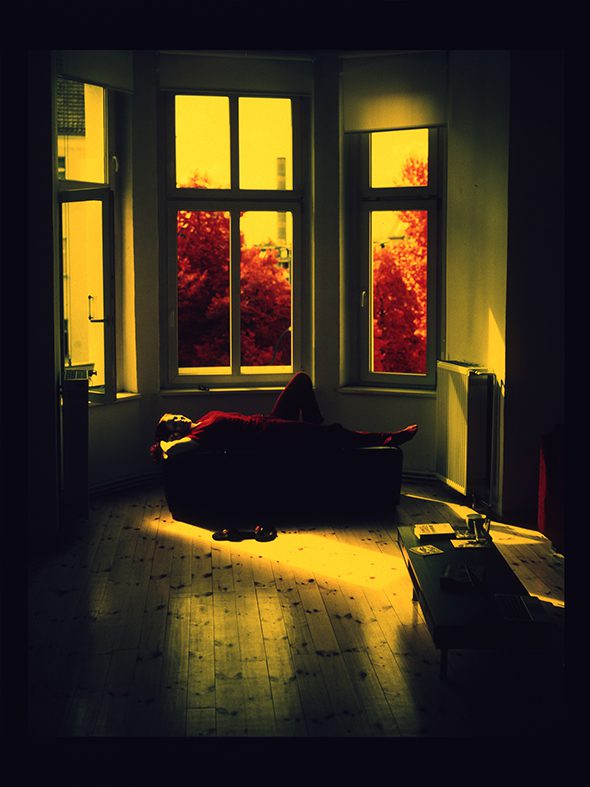 Attempts to acknowledge the work of these people has mostly fallen on the glazed eyes of a disinterested public. As John Oliver’s interview with Snowden showed, our culture as yet lacks an ability to recognize the sacrifices of these people and the significance of their work for human dignity and personal freedom. John Oliver interviewed random people on the streets of New York to find out what people knew of Snowden’s information leaks that began in 2013. The answers he got were distressing – people not knowing who Snowden was, people confusing Snowden with Wikileaks editor-in-chief Julian Assange, or people believing Snowden was essentially a traitor to the country by carelessly revealing classified documents to the rest of the world. What Oliver’s segment showed was that the majority of people simply did not care enough to educate themselves about Snowden, and the general lack of care stemmed from people’s inability to understand how their own life and freedom was affected by government surveillance programs. This lack of care is massively detrimental, it impedes the work of these activists and devalues what they have done.

The exhibition reinforces this problem of awareness and care by deliberately focusing on personas who acted as precursors to Snowden’s revelations. People like William Binney, Julian Assange, Laura Poitras and Glenn Greenwald called out upper level abuses of power and surveillance programs, and argued for the protection of human dignity long before Snowden’s revelations. Appelbaum recalls how before Snowden revealed the irrefutable proof of government civilian surveillance, these people were dismissed and even ridiculed as unhinged conspiracy theorists. Even now their work is largely unacknowledged in public discourse, though they effectively prepared the ground for Snowden. 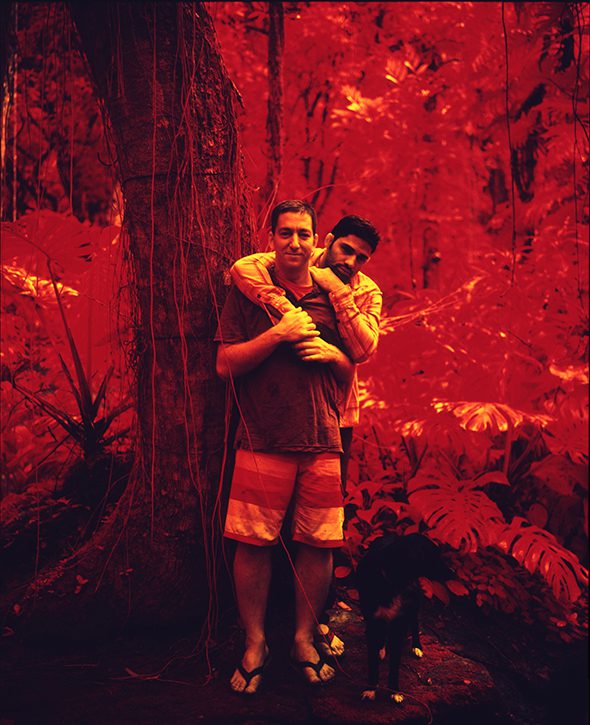 In certain photos subtle aspects indicate the unseen sacrifices these people have had to undergo. The Guardian Journalist Glenn Greenwald and his partner David Miranda are one such case. The latter was detained for nine hours in Heathrow Airport for suspected terrorism and over 50 thousand classified UK intelligence documents that he was carrying for Greenwald were confiscated. In the court case that followed, judges ruled that the detainment was lawful, though they admitted it was an ‘indirect’ interference of press freedom for the interests of national security. Appelbaum’s photo shows the couple standing together in the Brazilian rainforest, a warm and pleasant scene in sharp contrast to the personal attacks, threats, and dangers the two have experienced. Similarly, Julian Assange looks statuesque in the fading sun, though at the time the photo was taken he was actually wearing a ankle monitor while under house arrest. Appelbaum explained that he chose this photo because Assange still looked young and fresh, in shocking contrast to the harrowed and aged figure that he now appears.

William Binney’s photo is particularly tragic. In 2007 a dozen armed FBI agents stormed Binney’s house while he was coming out of the shower and held him at gunpoint, then confiscated his computer, discs, and records. The stress of this unwarranted invasion into his home aggravated Binney’s health issues and led to his second leg being amputated. The photo shows Binney standing upright, actually on his two prosthetic legs, with only his wheelchair slightly out of focus in the background to speak for the physical and emotional trauma he sustained. 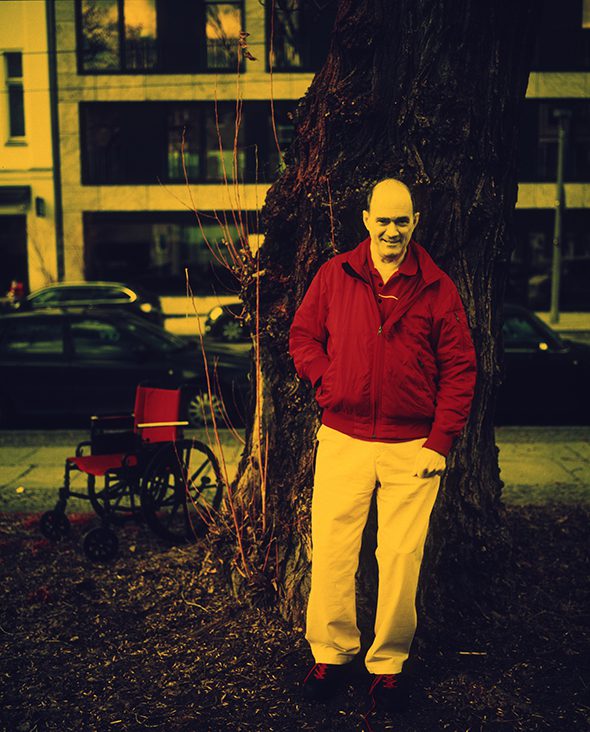 The concept of Samizdata takes its name from Samizdat, the remarkable underground process of distributing banned texts that emerged in the Soviet Union in order to bypass censorship. People were imprisoned simply by possessing certain books, so the rare existing copies had to be passed discreetly through friends or left in public places in the hopes that some other sympathizer would come across them, and entire books were copied out by hand. Samizdata is a term for information that could result in legal prosecution for possession, sharing and spreading. Like Samizdat, Samizdata has value only insofar as the general public actively participates in animating it by reading and sharing. The life and significance of these documents and files is based on people actually paying attention to them, without which they will be lost in the black hole that is the second page of Google search results. 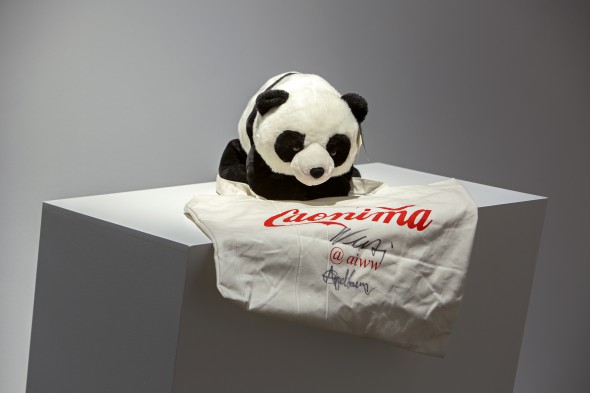