A taxi stops on one of the big avenues of the Big Apple, you can see the day is starting to glow. A woman walks calmly to the shop window dressed in black. With her long-sleeved gloves she takes out a croissant and coffee-to-go from a white paper bag. She is chic. The sunglasses on her child-like face make it impossible to read her expression. The haphazardness of the woman’s look, the joy of a regular city-life after a long night, soothe the viewer as well. 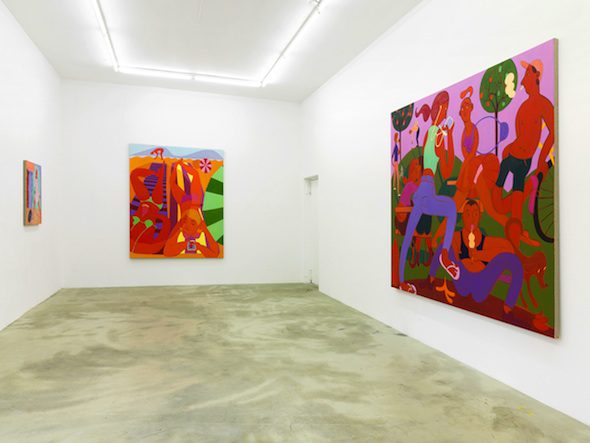 In the opening scene of Breakfast at Tiffany’s there is no emotion. Yet, through the light, reflection and movements we can easily get hints of the character. Grace Weaver‘s paintings, shown in her first solo show in Berlin at Soy Capitán, grasp a similar attitude. Instead of spelling out how a moment makes her feel, the New York-based artist shows its causal details in her paintings.

Weaver stresses the ‘girly’ perspective in her works. Honestly, at first, I didn’t get the point. Nevertheless, when I heard the artist’s question − “why are the girly and cute pushed so low?” − it became clearer. By using clichés of what is seen as girly, Weaver depicts contemporary daily life. “While I don’t think of the paintings as a ‘series,’ in the sense that there is a connective narrative thread. I think that they all share a certain generational sensibility, commenting on and/or participating in contemporary youth culture (and specifically, American youth culture) in some way. The smartphones are a through-line in that sense, as well as the sort of semi-interested/semi-apathetic relationships between characters,” says Weaver. Grounded in sensitivity, observation and felt experiences, the randomness of being on the beach and stalking your ex on Facebook gains more meaning. In a way, Weaver’s paintings narrate the ‘about-to-be’s. There is something uncanny in the banana peel that is about to be stepped on or the puddle the girl in the white dress talking on the phone hasn’t noticed yet. 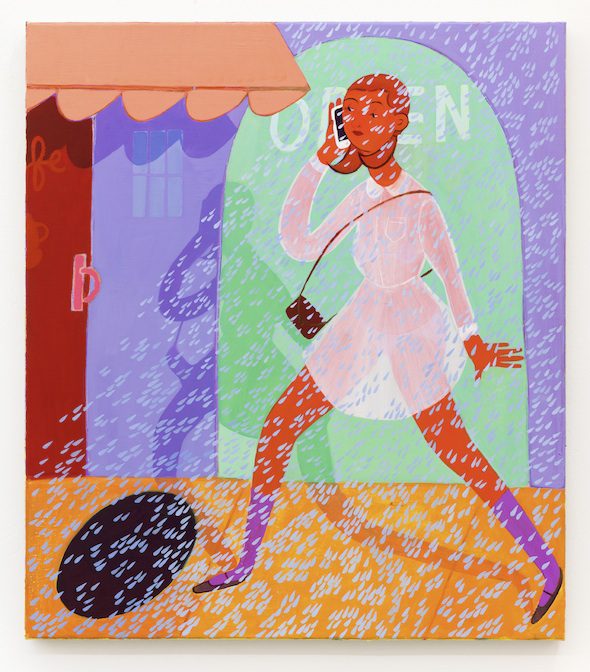 Grace Weaver – “Winning Some / Losing Some” (2015); Photo by Roman März, courtesy of the artist and Soy Capitán

The curvy figures with elongated limbs or the raindrops in ‘Winning Some/Losing Some’ (2015) or ‘Sunday Brunch w/bb’ (2015) are not arbitrary choices of the artist. Strong influences from the history of art lead Weaver, whether an Indian/Persian miniature such as an Abhisarika Nayika or a Balthus painting. Analyzing the characters of Indian art, artist’s paintings transform and open a path to a new world: for instance, Schlaraffenland, as Weaver points out in an interview for KubaParis. From Telekleides to Boccacio, Grimm and Brueghel the Elder, Schlaraffenland is depicted in various ways. In this utopian nowhere land, wine and luscious food are hung from the branches. In the forests, you can find the most attractive shoes and fabrics. What you do is basically lie down and do nothing. Such buoyant and smooth-sailing attitudes, also taking place in Weaver’s paintings, summon the aforementioned movie scene.

All the paintings in the show are fresh, as Weaver used the space of the gallery as her studio. It reminded me of the urge to paint on our grandma’s white walls as a kid or to throw our clothes all over in a neat room. The white cube, a space with such connotations, becoming an artist studio must have been thrilling. Being in the space while painting, imagining how to install, and working in the exact same light would really serve the painter, especially if colors are of such significance. 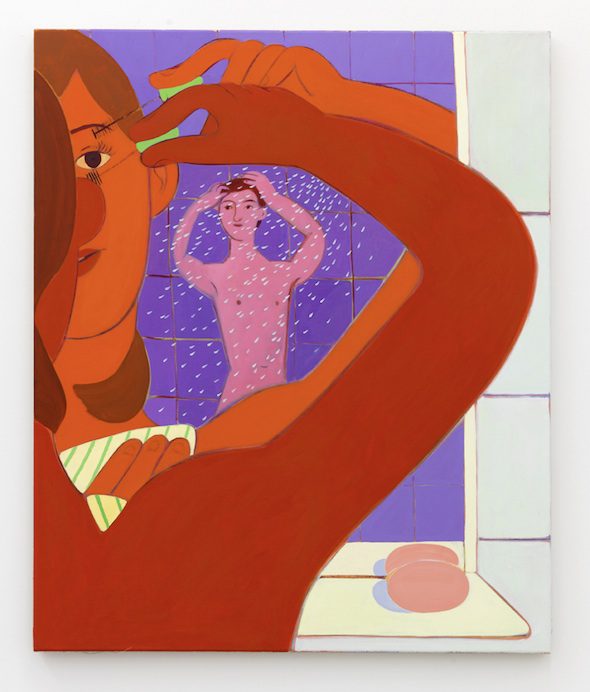 Weaver takes delight in use of color. Lavender, salmon, hues of yellow and orange, red, bordeaux, green, brown, pale blue, gray abound in her paintings. There is no perspective, whereas our eyes perceive the depth with the help of colors. The figure-ground relationship as in ‘Lust for Lite’ (2015) evokes the use of space as layers on top of each other in miniatures, instead of the typical Western perspective. There is no focus; everything happens at the same time in one space. If one takes the figure at the back and drags it to the front, nothing will change. Miniatures “merge multiple simultaneous viewpoints within a single painted image, juxtaposing complex elements,” as Margaret Graves writes in her essay “Inside and Outside, Picture and Page: The Architectural Spaces of Miniature Painting”. Although there might be objects belonging to a certain place, some figures are in a non-space in Weaver’s paintings, where the space expands and observed through the mirror.

So as not to look so girly, I shaved my head several months ago. I refused to wear pink until the age of 15, when I understood a color shouldn’t be gendered. Weaver’s work enjoins us to accept an attitude reminiscent of embracing queerness. Our society, which generates language, despises many aspects of womanhood: even our genitals implicate weakness – ‘the pussy’. The girl ordering the skinny latte from the well-known coffee company is holding a book about Matisse and his use of color, “rich and empty”. I wonder if anyone ever called the famous painter ‘girly’… 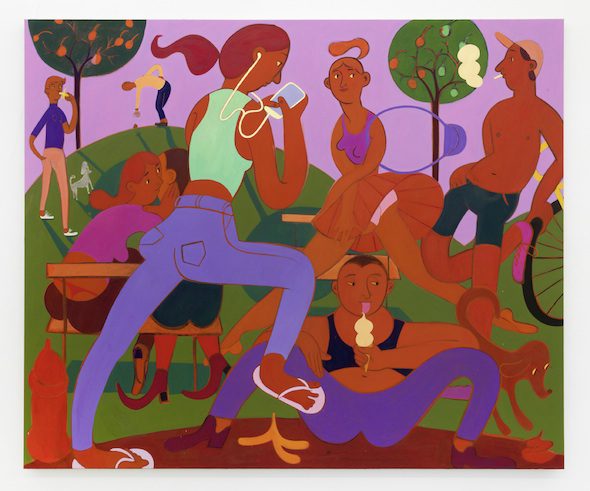