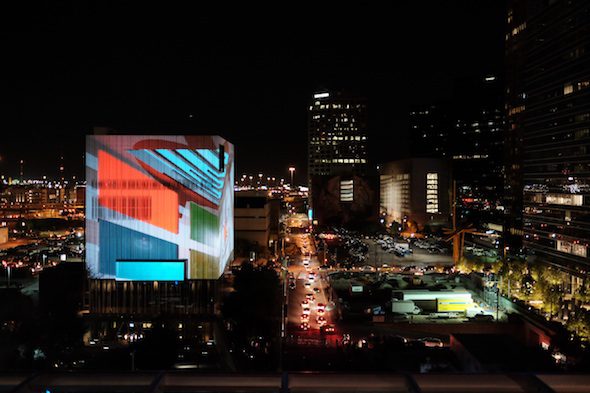 Aurora – a one night contemporary art event transforming the 19 city blocks of Dallas’ Arts District – kicked off this year with an impressive display of 3D mapping projections by 3_Search, illuminating the facade of the iconic Wyly Theatre. An operatic voice, accompanying the piece, washed over the crowd as more than 60,000 people flocked to the area for a night of non-stop, multi-media artworks and performances.

Following on from the success of Aurora in 2013, this year’s event saw an even bigger turn out; a result, no doubt, of the stellar line-up of artists selected by Aurora founders Shane Pennington and Joshua King and the 2015 Guest Curators Tim Goossens (New York), Carson Chan (Berlin), Aja Martin (Dallas) and Julia Kaganskiy (New York). 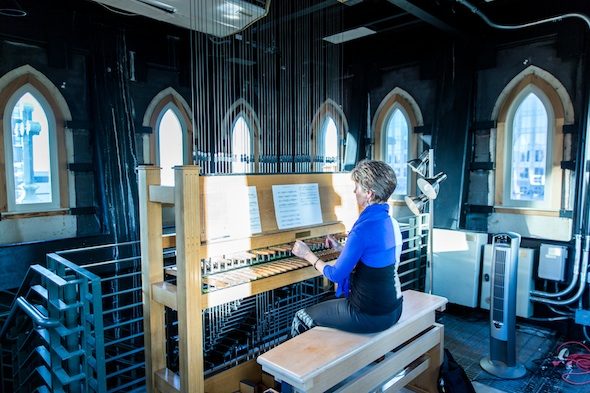 Many Berlin artists were showing at the event, including musician Dan Bodan, who composed a brand new piece for the Cathedral Shrine of the Virgin of Guadalupe‘s bell tower. The unique composition was played by the carillonist and reverberated throughout downtown Dallas, mimicking traditional urban sounds proposed from an off-site perspective. Andreas Greiner also presented a musical composition, this time allowing sea water and molecular algae to interact with the sounds emanating from a piano. The work looked at interspecies communication in an interactive way. The theme of this year’s Aurora event was ‘All Together Now’, reflecting on the synaesthetic effect of different sensory stimuli on the brain. The result was a striking range of different experiments, bordering contemporary art and science.

Jeremy Shaw showed his ‘Introduction to the Memory Personality’ in the Dallas City Performance Hall. Unlike other viewings of the piece, where visitors were asked to enter a small screening room one at a time, at this showing the audience was encouraged to sit a few seats apart from each other to create a sense of isolation amongst the fray of the evening. Shaw’s hypnotic video sucked the viewer into a black vortex of time and reality, using mind manipulation to generate a sense of dread, overlaid with a multi-dimensional soundtrack.

Niko Prinzen‘s ‘In the Event of Fire’ (2011) was projected on the north wall of I.M. Pei’s Meyerson Symphony Hall. The piece invited visitors to blow out a candle in Amsterdam by blowing into a microphone in Dallas. Connected through Skype, the sound of blowing into a mic was played on bass speakers positioned next to a candle in Amsterdam, and enough pressure was created to blow out the candle. The work played with the interconnectivity of disparate worlds through very material, everyday experiences and highlights our reliance on online systems.

Musicians and performers Martín(e) Gutierrez and Nomi Ruiz produced their latest music video, filmed in front of a live audience at this year’s Aurora event. In the work, the pair confront seduction and intimacy in mainstream media through selfie culture, with particular attention to the notion of an idolized womanhood. Poised on a rotating bed in the middle of Flora St., the performers invited passersby to engage digitally with their work, hashtagging instagram images of the video-in-the-making with #OriginAurora. 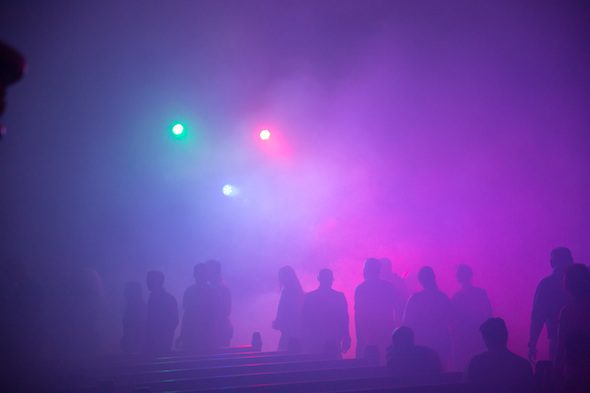 In the more visually-oriented dimension of the event, Anne Katrine Senstad, James Clar and Sean Miller presented separate works dealing with near-hallucinatory spatial experimentation. Senstad created the ‘Sonoptic Parallel’, projected inside the walls of the St. Paul United Methodist Church. The work, accompanied by music from the electronic sound pioneer C.C. Hennix, combined projection with semi-transparent strips of mirrored plexiglass that looked, from a holistic point of view, to be a giant pixelated spectrum taking over the church. In a similar vein, James Clar’s ‘Pixelated Serenity’ turns the Virgin de Guadalupe Cathedral into a light-filled, spaceless environment. The almost reverent, heavenly cloud of coloured light creates an almost religious experience as visitors move or sit, half-disoriented, around the church. Sean Miller’s ‘Abri’, projected on the facade of the Dallas City Music Hall, consisted of a real-time generative video showing natural formations and landscapes.

‘Memory Lane’ was a site-specific project initiated by Veronika Georgieva and Stephen Shanabrook that served as a collective visual archive of the city of Dallas. Through an open call, the artists asked locals to contribute historical images of the special events and daily life in the city, which were then projected as a literal walk down memory lane.

The night was packed with exciting new and re-contextualized works by leading contemporary artists, including Bettina Pouttschi,Jitish Kallat, James Geurts and Lynn Marsh, among many other international and Dallas local artists and performers. For a full list of participating artists and more images from the night, visit the Aurora website. 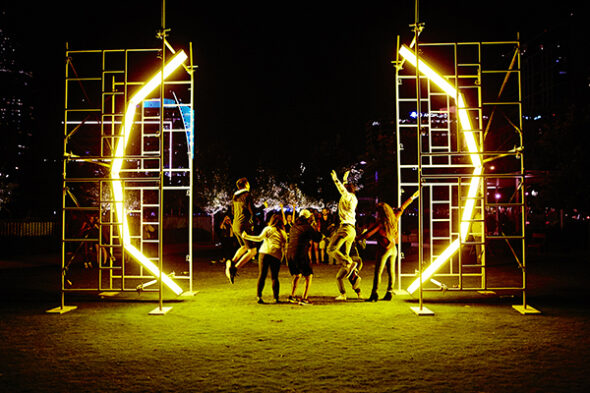