A recent personal research interest has been the importance of reproductive labour (care, nourishment, shelter) as a precursor to artistic production. The popular Norwegian word koselig (cozy) haunted me throughout my 10-month stint living and working in the country in 2013, as I always felt it denoted an exclusive, bourgeois or contrived lifestyle condition, aided by typically Scandinavian minimal design and a sense of apolitical zen. My recent visit to Oslo in the context of the Performance Art Oslo (PAO) Festival, however, shed new light on the concept from the perspective of contemporary art practice: the organizers (Franzisca Siegrist, Tanja Thorjussen and Kirsty Kross) took particular care to create a welcoming environment for participants and audience alike, offering daily soup and hot drinks and a communal dinner each evening for the performers. The location of the festival at Atelier Nord ANX was central and proved an ideal headquarters for a multi-day event of this kind, where people could come and go without disturbing a stark hierarchical distinction between audience and performer. The curators, artists themselves, emphasized their interest in providing for these basic needs, to create an environment that was also a pleasure to work in. In my experience, this is incredibly unusual: in the context of a widespread disregard for forms of labour that do not fall within capitalist definitions of productivity, these kinds of resources and concerns are rarely considered as crucial to contemporary art making. 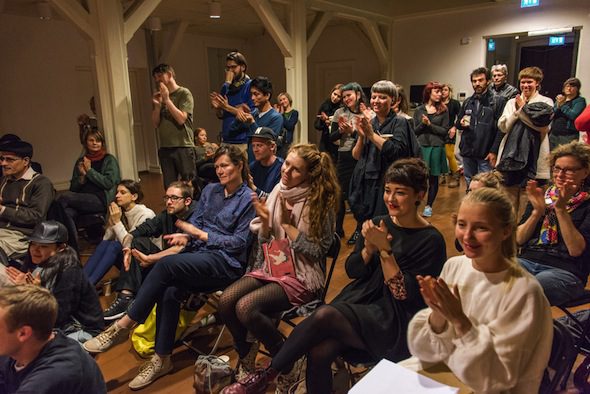 The PAO Festival, a weekend-long public event organized annually by PAO, laid bare an impressive cross-section of formal tropes and novel approaches to the burgeoning field of contemporary performance, this year focusing on the Nordic region. The opening program on the first evening invited participating artists to give Artist Talks, elaborating on their methods and artistic practice. Interestingly, some of the best performances of the weekend came out of that format: when asked to discuss their work, many artists responded performatively. Icelandic duo Wunderkind Collective mused on the idea of waiting, replicating the sensation through a series of deadpan platitudes and empty statements. The all-too-familiar sense of filling space with meaningless words, typical of commercial dispatches, drew our attention to a lack of substance in these prescribed arenas. A slideshow displaying photos of the pair in their youth boosted their lackluster motivational claims: “We are just people like you.” They urged the audience to “just breathe” – openly mocking New Age ideology, packaged in the form of a lower back tattoo.

Other artists took a more academic approach to their talks, drawing on particular typologies of performance (amplifying everyday processes) or political viewpoints (the gendered optics of performativity). It was in that setting that the performance collectives – Wunderkind and WOL – truly shone. Their performances are always informed by their interaction and engagement with one another so, naturally, any meta-discussion of their work is already a part of the very fabric of their collaboration. Wunderkind and WOL’s performances revealed precisely that interaction, and therefore their Artist Talks could only be a reflection of that dynamic. 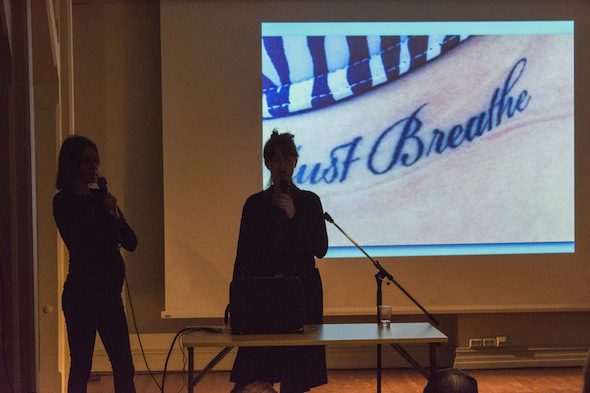 The evening closed with a show by the Performance Art Studies (PAS) group, who had just wrapped up a weeklong intensive workshop called ‘Salt and Pepper’, led by BBB Johannes Deimling and guest teacher Magnus Logi Kristinsson. The thirteen participants produced individual performances scattered across the atelier space. The audience moved throughout, free to explore the isolated microcosms created by the performers, occasionally invited to actively participate. One memorable performer, dressed in a cumbersome dress filled with something unknown, moved uncomfortably around the space, grunting and panting in a pseudo-sexual way. She would choose a victim (they can smell your fear) and stare deeply into their eyes, inducing a disconcertingly intimate moment. Finally, she reached disturbingly far into the front of her dress, feeling herself for a long time, and anti-climactically produced a handful of confetti, which she showered on her companion, a disappointed look on her face. All around the periphery of the space, performers engaged in different activities, from the bizarrely banal to the fascinatingly enigmatic. The group performance showed a wide range of approaches to performance art, not unified but somehow complementary. 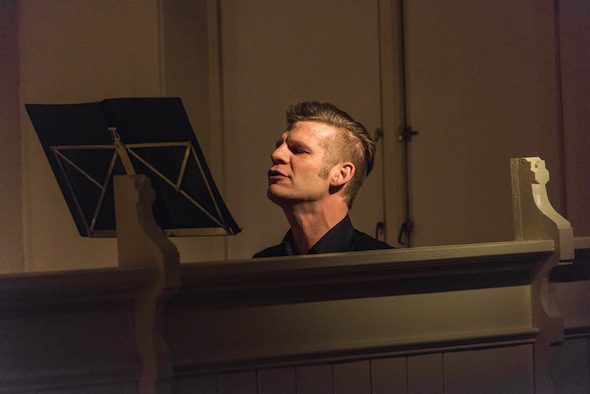 The following two days elaborated many of these initial impressions. The first day kicked off with a text and sound-based work by Magnus Logi Kristinsson. Moving between a cluster of music stands arranged at different heights, he read aloud a score of alphabetically arranged words. It was unclear whether the words were in a foreign or invented tongue, sounding in turn to have Arabic or Romantic roots, the performer’s rolled Icelandic Rs further clouding attempts to discern meaning. A poetic, almost musical cacophony arose from this opacity of sense, closing with a reading of a popular love song, entirely off-cadence. Experiments in sound and musical variation were not uncommon throughout the weekend, and took radically different forms.

The next performance, an exercise in duration, was a scenographic tableau created by Augusta Atla and Nikos Branidis. The pair emerged on stage, separately engaged in their respective labour, both in the process of developing artificial and organic works. At times, they seemed like characters in an Antonioni film, the disgruntled male genius at work on his craft, and the simplified female figure, literally in touch with nature. They barely interacted with one another, aside from small gestures, and the metaphor of their disjuncture felt at times heavy-handed. 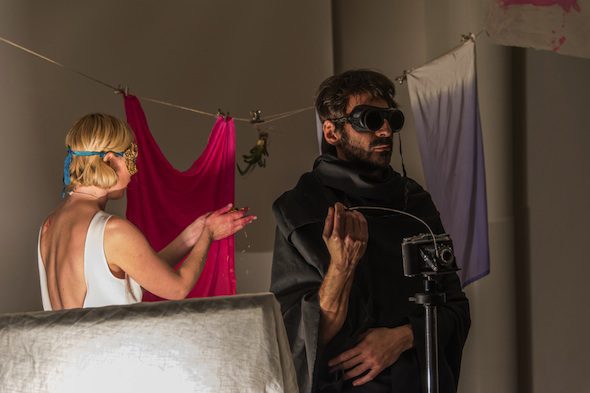 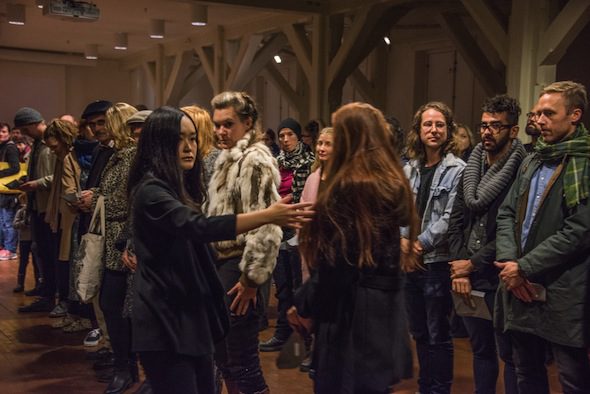 After a few more performances, the day concluded with a jolt, when Hiroko Tsuchimoto asked the 50 or so audience members to put on their coats. We were then given a piece of paper and placed in single file. The artist approached each of us, opening the paper that would seal our fate. I ended up in the smaller of the two groups, who had all received the message “Go Home.” We were curtly escorted out of the building and onto the street, the door locked behind us. We were cut off from the three-quarters of people left inside, who had been invited to stay. A physical divide was created between us and them, and an air of class privilege reigned. Dejected, I followed her instructions and went home, never discovering what had gone on inside.

The second full and final day of the festival seemed to have been curated more consciously than the previous, as a congruity emerged between the kind of performances on offer. Many of the performances became more abstract, like Essi Kausalainen and Marita Isobel Solberg‘s physically demanding and labour-intensive pieces, punctuated by ritualistic movements. Kausalainen replicated obstacle course tasks combined with moments of intellectual abstraction, while Solberg endeavoured to actively free herself from physical burden, cutting away at lumps of dough sewn into her costume. The visceral element of danger coming from both performances created a realization of our embodiment, reminding the audience that we were not merely passive observers. 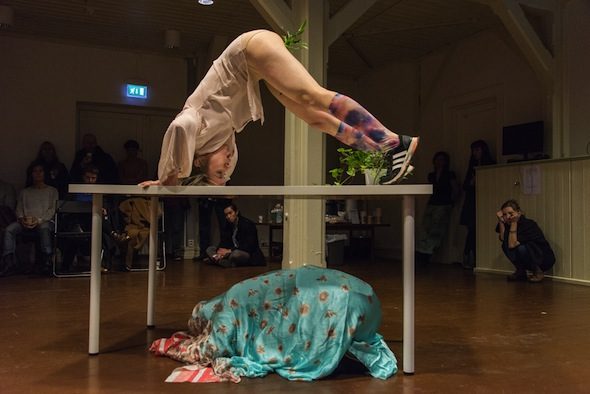 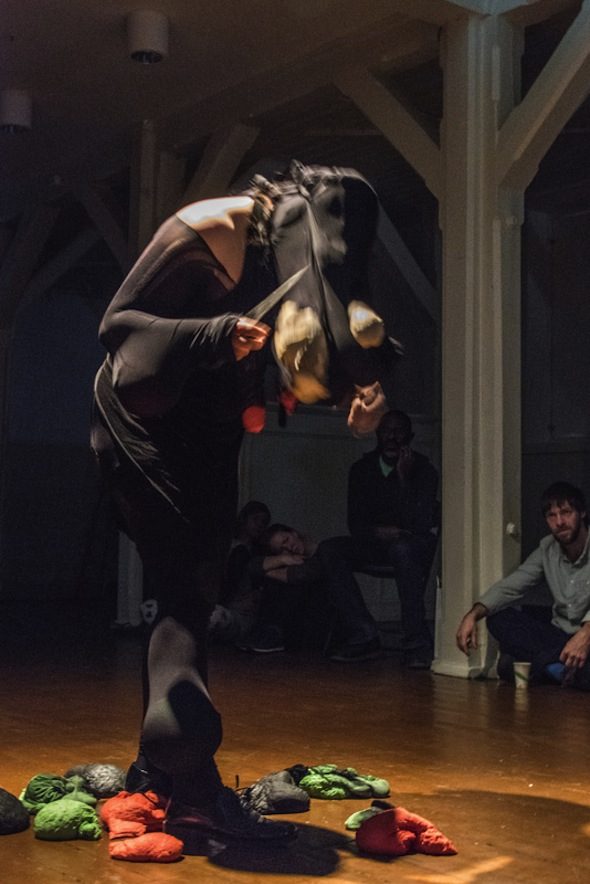 The second day also concluded with a portion of the audience leaving the venue, this time in a less orchestrated manner. Naja Lee Jensen‘s performance was largely video-based, as she presented first-person footage of a military tank in an active warzone. In light of the conflict in Syria and recent attacks in Paris and Beirut, the footage placed the audience in a disturbingly realistic scenario that was too much for many to handle, and produced several emotional walkouts. Both Jensen and Tsuchimoto’s concluding performances presented a much-needed political dimension to the festival, and were a testament to the curatorial forethought of the event.

A thorough selection of video documentation from international performances supplemented the variety of performance art presented throughout the festival. In its third year, the PAO festival seems to have struck a fine balance between entertainment and critical engagement. The emphasis on community building was a refreshing addition to this kind of event, which kept the audience coming back each day. 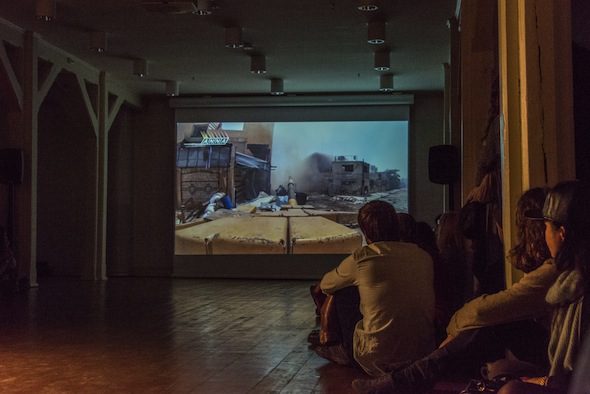