An immediate sense of a binary fragility and imposition washes over the mind when a person steps into Dittrich & Schlechtriem’s newly curated exhibition In the Land of the Blind the One Eyed Man Loses Sight. The display formally explores the ideas of environment, time, space, and ontology. These are embodied in works such as Karin Lehmann’s irregular and unfired clay jugs that chaotically dot the floor, as they begin to reclaim their territory through the process of water-induced dispersion. The vessels were made by a human – their clay was made through erosion and deposition – and their structure was lost through their intended use in combination with time. Now, a purposeless clay soup oozes onto the floor making the space less navigable for visitors. This violent and seemingly futile tug-of-war between humanity and nature is a theme that echoes through the gallery. 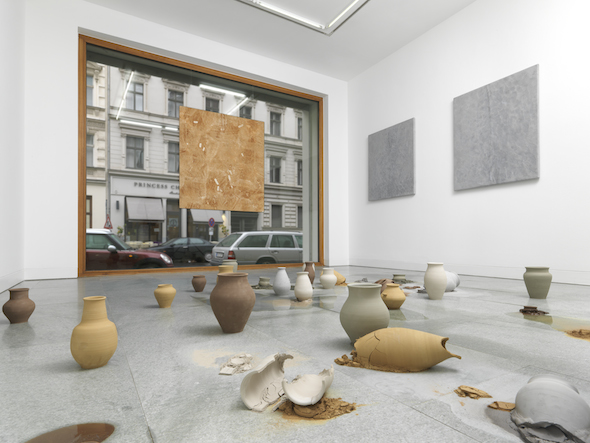 Look closer at one of Julius von Bismarck‘s three photographs and you might just begin to recognize the uncanniness hidden in plain sight. Those flecks of crisp white on the stems and rocks in the background – the leaves that have inexplicably grown into such a vibrant chemical green – are amongst the questionable elements that begin to eat away at the facaded perception the audience has of the seemingly natural subjects in Bismarck’s works. In fact, the pieces are a part of the Landscape Painted series, for which the artist worked with natives in Mexico to paint rocks and plants first white, and finally their original colours again. So the dialectic continues, as Bismarck was inspired by nature to attempt to reproduce it, and in doing so irreparably damaged and poisoned his plant-subjects. Whether this single artistic case in the name of beauty and thought was contained and justifiable is a question that still lingers in the air as the viewer proceeds through the gallery.

It is almost as though the audience is guided through time as well as space in the gallery. Like flowing from the Renaissance to Enlightenment, moving from front to back, the viewer leaves behind individualistic, utilitarian, and artistic connections to nature, and begins to consider such topics as science, discourse, industry and authority. Nicholas Mangan’s Notes from a Cretaceous World, housed in the bottom backend room is a work that perfectly facilitates this change. His documentary narratively and visually juxtaposes the beauty and tragedy of a system that so preferentially views nature through the toxic combined lens of science and capitalism. 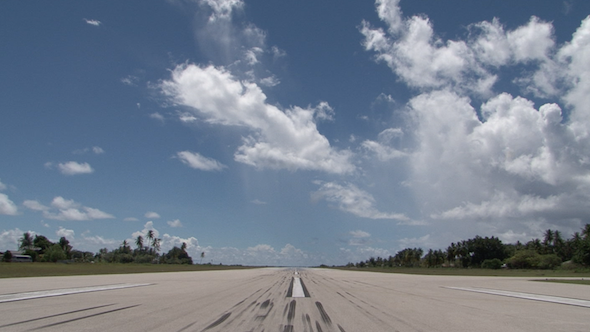 The documentary critically examines the way that the phosphate rock mining industry led to a economic boom and bust over the span of roughly forty years in Nauru. Rigid geometric remnants of this industry stand as a strain on the natural environment of the tropical island. Some of the artifacts of this industry such at the rusting resource extraction plants, give the impression of still being an open wound to its surroundings. Others, such as the eroded ambiguous large-scale concrete blocks subtly nestled amongst the ancient coral, appear to be a fading scar. With time, nature may reclaim some of its beauty after the ravages of mass extraction, but it is society that will continue to pay the price. As the film tells, Nauru became a nearly bankrupt state and was subject to the hazardous political whims of the world’s superpowers.

In moving up the stairs to the gallery’s second disconnected location, it feels like the viewer is brought up-to-date, and into our current ultra-reflexive paradigm. Connotations of politics and technology are carried on as undertones to the question of situating oneself within the processes of nature. In playing with the themes of Jules Verne’s Journey to the Centre of the Earth, Alvaro Urbano’s rock sculpture invites viewers under a blanket in its crevasse to ultimately lose themselves in its tranquil darkness. Urbano then divulges a cryptic code to the core of the Earth on a separate calligraphic sculpture. For better or worse, nature and humanity become indistinguishable. 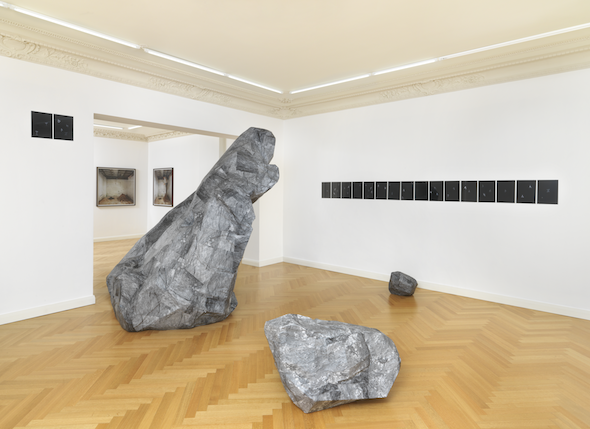 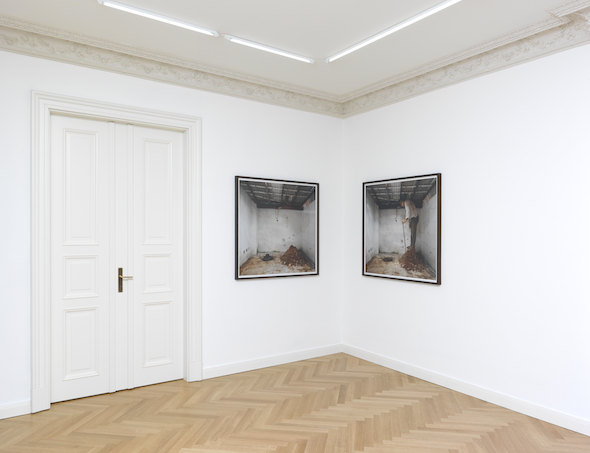 This is the open note on which the exhibition finishes. In the words of Robert Browning, yes – perhaps our reach should exceed our grasp. Presently, our economic, philosophic, and scientific systems have intertwined such that they have brought us to the eventuality that in exploiting nature, we are killing ourselves. Now, we need to be able to imagine a future reality beyond our grasp; beyond this destructive false dichotomy of self and nature. Maybe, the key to doing this is shedding our materially-oriented scientific perspective of nature in favour of a less tangible, and more deeply-rooted connection based on empathy, culture, and imagination. For more insights into the connection between humanity and its environment, visit Dittrich & Schlechtriem gallery until January 16, 2016.