While snow carpeted the enormous Malzfabrik complex in Tempelhof, Andreas Greiner invited us into his studio space, housed in one of the old brick factory buildings. Greiner shares a studio with seven other artists, most of whom have been his collaborators and many of whom are ex-classmates from Olafur Eliasson’s Institut für Raumexperimente. The huge room is packed with a varied selection of building materials, finished and unfinished art works, books, and general odds and ends, where the overall effect is one of ordered chaos. Shelves, desks, and erected walls separate each artist’s quarters. Greiner’s work space is comparatively tidy and minimal, with a handful of finished works on display, including ‘Roundabout’, a gyroscope sculpture that, when in action, spins a cube containing bioluminescent bacteria to activate a natural glowing light, and photographs from ‘Entladung’, the series of explosions he and Fabian Knecht set off across Berlin between 2012 and 2013. Greiner’s studio-mates share his interest in sculpture involving process, time, and often natural elements. Greiner and his collaborators’ controlled sculptural experiments allow chance and process to unfold into temporal and transitory works. 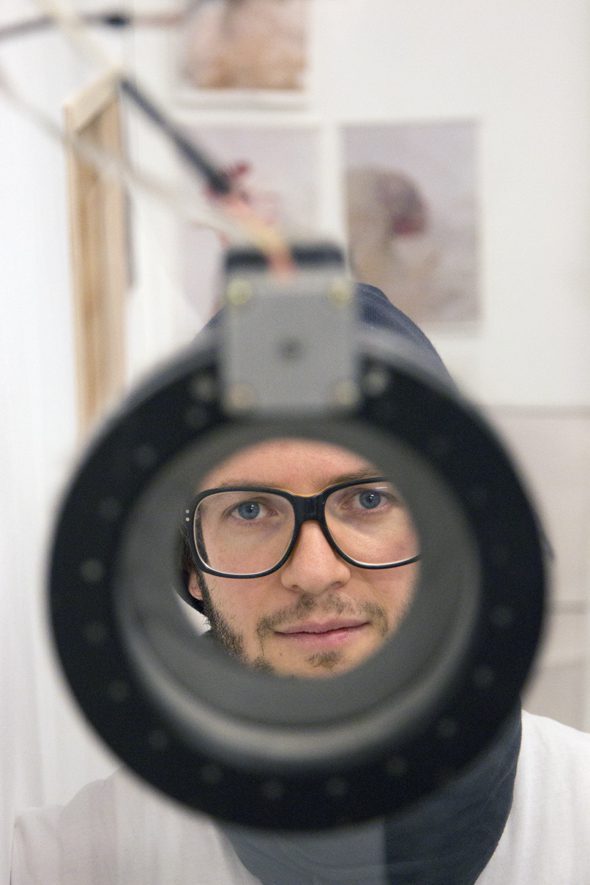 While his assistant put together a mount for the work ‘Flygate’ – a contraption that lets flies escape from a room through a motorised gate controlled by a camera sensor – Greiner showed me works from his recent photographic exhibition as winner of the IBB Prize for Photography 2015. The works are portraits of different chickens, each with a name, and each taken through a different image making method: classic studio portrait, radiography image of a skeleton, DNA sequencing from a liver sample, and a histological slide of breast tissue. These specialised techniques rely on enlisting the expertise and equipment of scientists and laboratories, an aspect characteristic of many of Greiner’s works. The series, titled ‘Studie (Portrait) zur Singularität des Tieres’, includes a variety of portraits of singular living entities, from Heinrich the rooster to a hatching fly larvae to microscopic algae, the latter appearing like otherworldly deep sea creatures glowing white against a pitch black background. 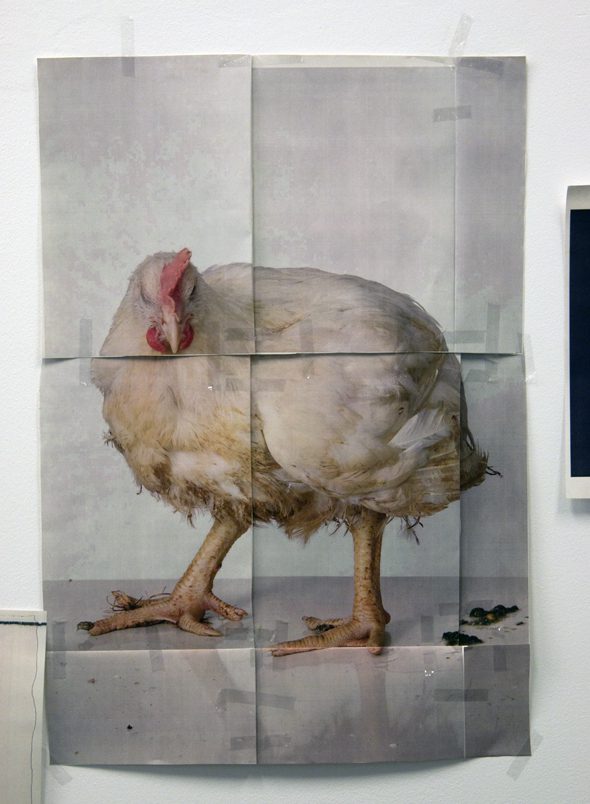 Greiner divides his practice into two categories: time sculptures and living sculptures. Bioluminescent algae, bacterial cultures, and hatching flies are typical examples of the living elements in his sculptures. He thinks of these works as being co-authored by natural processes that he allows to unfold and determine the final result. Time sculpture is harder to define. In a broad sense these works defy the static nature of traditional sculpture. They perform in a particular moment in time and space where the work takes on a physical transition. He switches on a sculpture, created in collaboration with Armin Keplinger, where droplets of distilled water drip from a tube onto a heated aluminum plate. The quivering droplets dance in circles until they evaporate. The movement and lifespan of each droplet is unique, which, explains Greiner, is how the notion of time sculpture can be most explicitly understood. He also thinks of his more performance-based works as sculptural moments rather than performance, such as when his blue-light algae are stimulated by a live pianist or, in another work, when a pianist played from the live notations taken from a projection of flies hatching across blank sheet music. 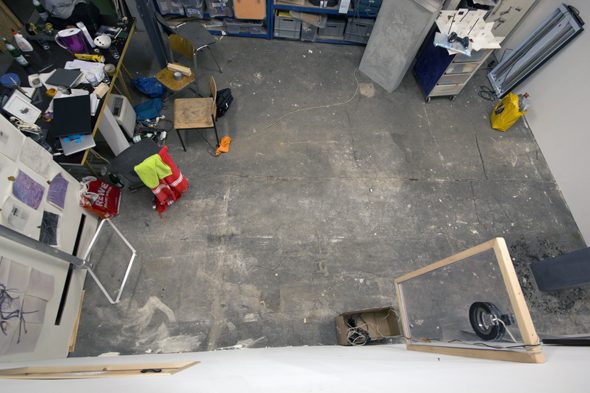 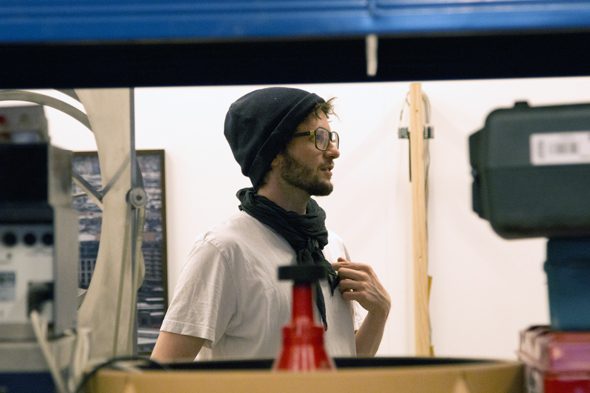 A fascination with anatomy took Greiner to both art school and medical school. He tells me he loves to study and could do it forever, which is clear in the way he casually and effortlessly drops scientific terms and explanations into his anecdotes and descriptions of artworks. This love of anatomy extends into the microscopic world. He has become somewhat of an expert at growing the bioluminescent algae he uses in his works. He houses them in his apartment, and he receives several emails a week from artists wanting to buy some. Greiner calls this microscopic world “a hidden landscape that you don’t normally perceive.” His living sculptures, as with his portrait series, have an element of uncovering or making visible that which is unseen or taken for granted. Greiner considers viewing one of his live algae works as an encounter where “you are meeting one of the evolutionary oldest living beings on the planet.” His portraits give an identity to his otherwise anonymous subjects, such as Margarete, the chicken that he bought from Netto, immortalized in an abstract looking pink and blue histological breast tissue slide. 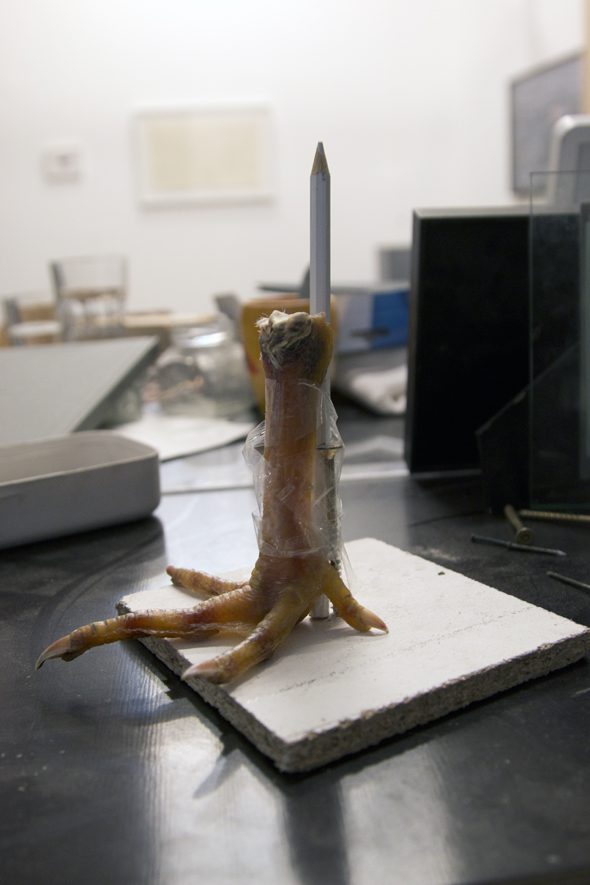 Many of his works rely on collaboration with scientists and institutions, using very specialised technology and materials. In his experience they are always very open and eager to help. It also helps that Greiner made some useful contacts while studying medicine. He shows me an early work he made with Julian Charrière using bacteria, which was one of his first collaborations with scientists. Composed like a tiny Mondrian painting, the little square petri dish cultivated blue, red and yellow bacteria to replicate the iconic abstract paintings. To realise the work he contacted Humboldt University where he luckily had a connection to the research team leader. And once you have done one project with a laboratory or institution, Greiner explains, it is easier to arrange the next. 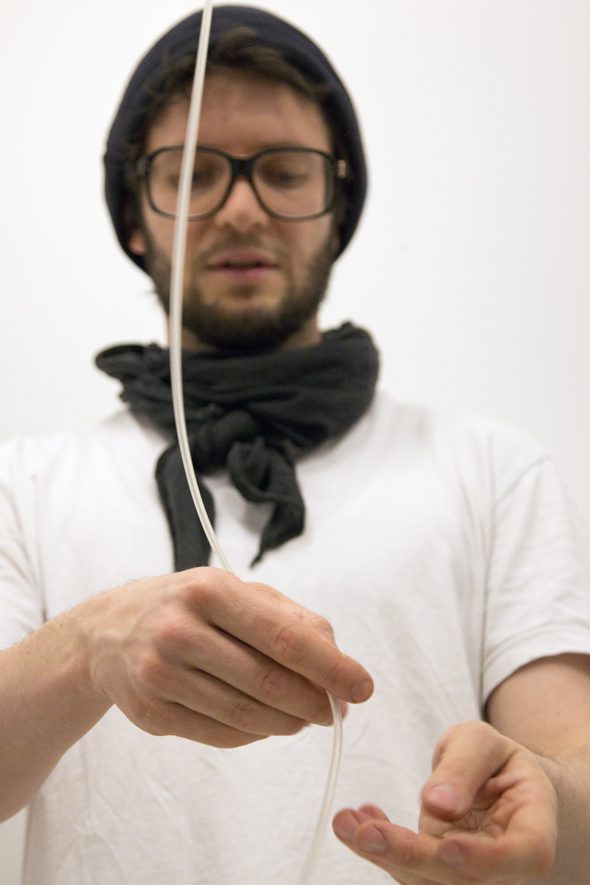 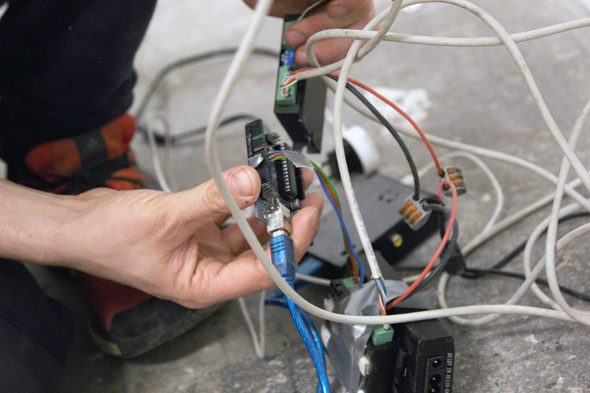 Though driven by scientific methods, Greiner’s works have a clear aesthetic aim. However, when working with living organisms you can never guarantee how they will turn out. I ask Greiner if his projects always work the way he expects. He answers that he is usually lucky, apart from his home-grown algae not holding up to the electron scanner photographic process for his portrait series, or causing a fly infestation at the Berlin University of the Arts for his 2012 work ‘Every fly is a piece of art’, where he hatched 250,000 flies in a gallery that he bought as maggots from fishing shops across Berlin. Greiner describes his bacterial culture works as beginning like a blank canvas or unexposed photographic film, where the work is left to develop under natural processes. In another work with Julian Charrière, boxes of agar were placed at different locations in Germany and Switzerland – chosen for their geological, cultural and personal significance – and left to be exposed to micro-organisms. The result was an array of surprisingly unique, richly coloured and textured living artworks. He brings up the scientist and philosopher Hans-Jörg Rheinberger, who believes that it is the little accidents and unforeseeable outcomes in experimentation that lead to discovery. In this sense the avenues to discovery in science and art are similar. It is the lack of precise control and inability to predict the outcome that create the balance between artistic curation and the natural order of chaos in Greiner’s sculptures. 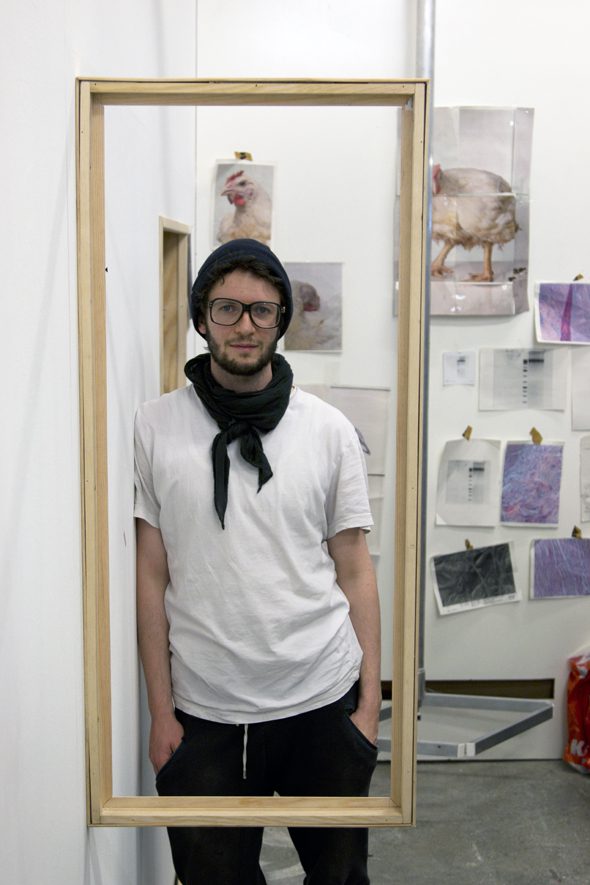 He is currently working on a method for cultivating micro-organisms on textiles, to make into unique individualised jackets for his forthcoming book ‘Anatomy of a Farytale’. The test fabrics appear splattered with speckles of colour, fixed to prevent further growth and degradation. His Mondrian petri dish, however, has been constantly changing since its creation. Greiner shows me its current state, now looking like a shrivelled grey and green miniature garden. Co-authored by nature and left to chance, the work achieves Greiner’s original goal of reversing Mondrian’s artistic progression, starting at abstraction and returning to nature.

April Dell is a freelance art writer based in Berlin. She has a degree in Art History and Film, Media and Communications from the University of Otago, New Zealand.