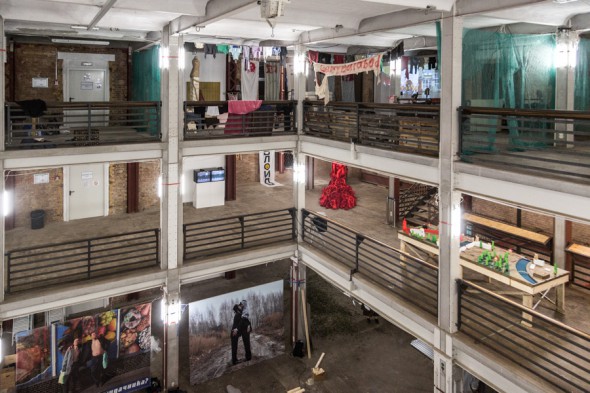 Bringing together humor, history, personal stories and politics in a terrific mess, Balagan!!! Contemporary Art from the Former Soviet Union and Other Mythical Places explores the former East, particularly Russia, and the effects that area has had on Northern European countries. The works speak in a loud, well-informed voice about Russian politics and culture, with an inventiveness and a comic tone that is characteristic of former Soviet states. The works take a variety of formats – large-scale paintings, installations, performances, and social actions – that have been documented in a multitude of creative ways, with interviews, letters, notices, and props that challenge the notion of the artwork as whole, tangible, and isolated from its social context.

The works address problems very particular to Russia and the former East – dealing with issues of illegal migrant construction workers and homophobia, for instance. While looking at some of the works, I was both educated about an issue and presented a strong artistic statement about it. The effect was not unpleasant: I found the exhibition was highly informative in many ways, though it did surprise me how little I knew about contemporary Russian life and politics. 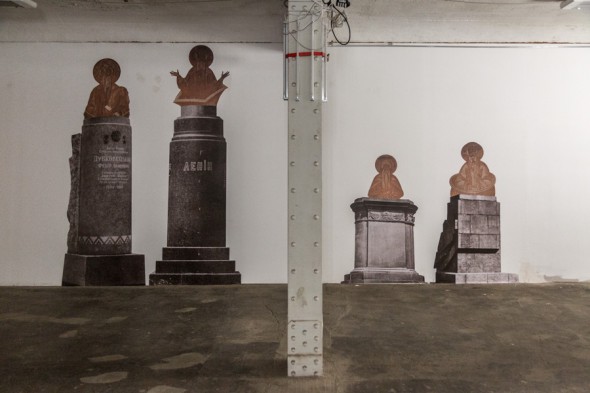 I had the chance to speak to the curator, David Elliott, about some of his reflections on the large gap that appears between Western and Eastern Europe. Elliott is a scholar in Soviet and Russian avant-garde art and has a long history of working with artists from Russia and the former East. He is highly intelligent and a great speaker – he offers his thoughts without needing to be pressed and openly speaks his mind. When asked what defines Eastern European art for him, Elliott deftly shut down the question. To him, Eastern European art, has its own history and traditions and subcultures, but that also does not mean that you could define or catalog its qualities. He does offer some observations: “one thing these artists have in common is the impact of socialist realism and the idea that art must be ideologically motivated. There is also this dark humor that was cultivated in the gulags, though of course it was already present long before the Soviet times, in the works of Gogol and Dostoevsky.” 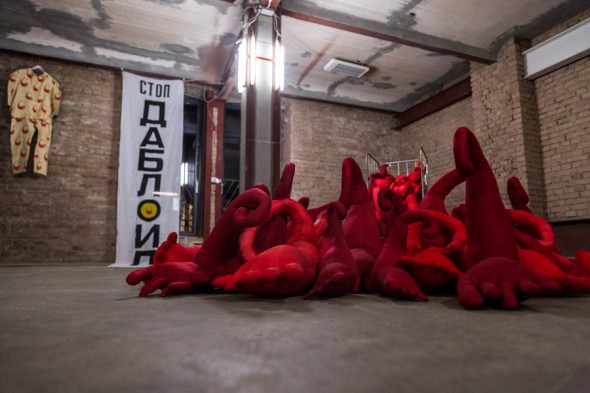 Why show this exhibition in Berlin now? Elliott explains that firstly, they chose this site because Berlin has a unique geographical and socio-historical relation to Russia as a former Soviet state. But the issue goes beyond that: the political and social issues that are addressed by Eastern European artists cannot be separated so neatly from Western thought and politics. While the works in the exhibition often address problems very specific to Russia and surrounding areas, they are also massively relevant to a Western audience. Elliott explains that a lot has happened in Russia and Eastern Europe since 1989 that has largely remained unexplored, which motivated him to curate such an exhibition now.

Elliott explained that the subtitle of the exhibition – ‘Contemporary Art from the Former Soviet Union and Other Mythical Places’ – is meant to poke fun at the assumptions of the Western audience and their general lack of concern about the Eastern European area, for whom Russia and the former East is a mythical land with a shirtless president and strange obsession with potatoes. The exhibition attributes the difficulty in understanding Eastern European culture and politics on the limitations of the Western audience. This approach creates a form of cultural contact less determined by power dynamics or simplistic definitions. By being able to play the fool, laugh at ourselves and our own ignorance, we invite the people of a world that we know little about to educate us and share. 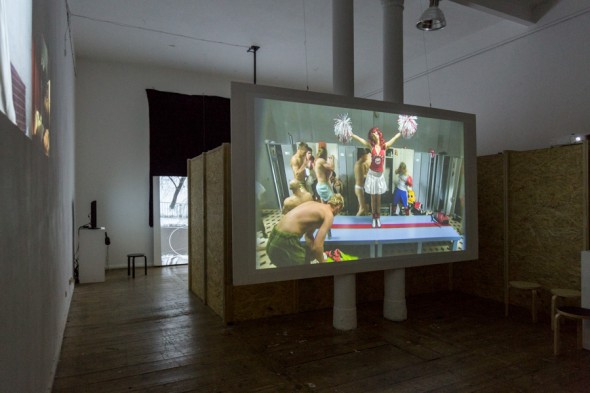 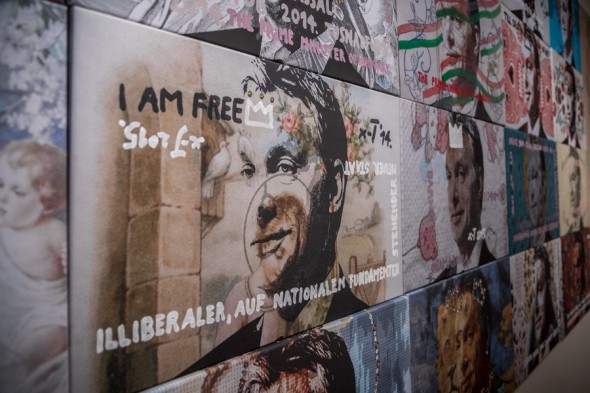 As unrelated as the situations may appear, Russia is a contemporary, modern state that functions with a cultural imaginary that is not so different from the West. While the types of political control and the social and economic problems of Russia seem unimaginable in the West, they are also not so different. Russian censorship functions with forms of soft suggestion and self-censorship rather than overt suppression. Self-censorship is a condition by which people censor themselves due to a perceived disapproval from the authorities, a practice that has been ingrained in the Russian people from Soviet times. Additionally, Russian laws prohibit ‘extremist’ or ‘terrorist’ publications in Russia, for instance ones that ‘promote illegal action’ or ‘inciting hatred.’ These vague terms have been used to prosecute people who have spoken up against Russian politicians or encouraged protest. Artists, poets, and activists have all been labelled as terrorists or extremists by the authorities, and this is used to justify legal action against them. However, I think Russia is not the only country that selectively labels people as terrorists for the sake of a different agenda. For instance, we can look at the US media labelling certain mass shootings as terrorist attacks while others, notably when a white male is responsible, as an isolated incident of mental instability.

In Russia, access to public registers is also often controlled, with political and economic processes are often lacking in transparency. People simply have no way of following what government officials do or how much money they earn and how. While free speech is not directly controlled, independent media and public people have no way of being informed about current affairs other than from government-owned media sources. 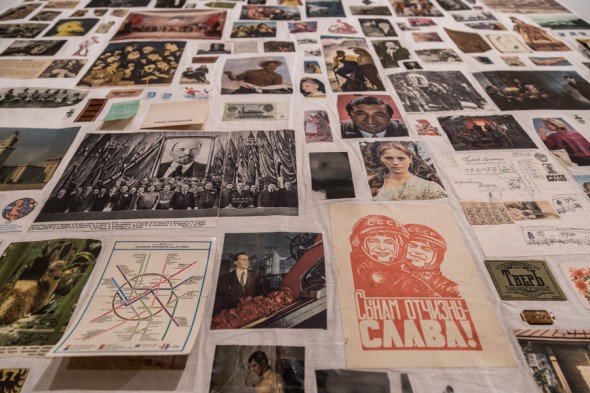 While these soft tactics of control and discouragement in Russia may appear to us as extreme instances, they offer a very jarring example of how public awareness can be manipulated and controlled, through language and by framing facts in certain ways. People fear the disapproval of the governments, corporations, and institutions that they depend on. There are many instances of this in the West – for instance, publications choosing not to publish material that will offend sponsors. Noam Chomsky and Edward S. Herman’s book Manufacturing Consent began an exploration of self-censorship in US mass communications media as early as 1988.

As outsiders, we are able to look at the Russian example and can easily see its problems and issues. What is remarkable is that artists and activists inside Russia are able to develop a critical distance from the political and cultural environment that they are immersed in and produce such sharply insightful works, moreover with such a terrific sense of humor. This particular Russian humor allows people to resist despair and hopelessness, while stripping authorities of their power by making them laughable. It’s a tactic we can certainly learn from.

Balagan!!! is very much a celebration of the wit and sharp insights of Eastern European thinkers, activists and artists. As Elliot explains, the exhibition is “meant to show that there are people [in Russia and the former East] thinking for themselves, they are not simply stooges of the state or brainwashed by the political regime. There are many people there who are very outspoken, often more so than in the West.” 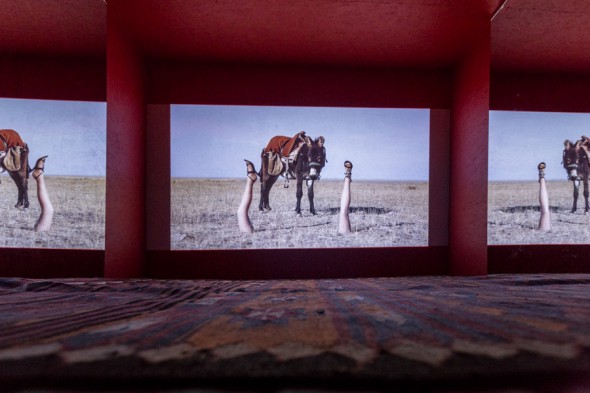