Orchestrated by Indian Administered Kashmir’s first centre for contemporary art and research, the opportunity to work in tandem with a Kashmiri counterpart in exploring traditional local craft and art, is being offered by Gallerie One and Kashmir Art Quest. Set to take place during the summer of 2016, it is an all expenses paid artist-in-residency program, offered to any international artists 18 years or older. 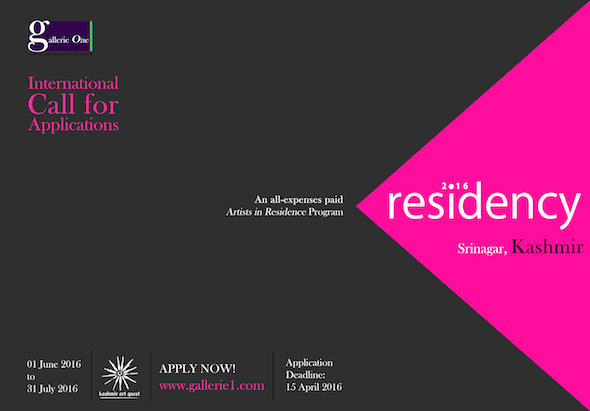 Gallerie One has become a precedent-setting intuition after having faced adversity when its inaugural show, Contemporary Practices and New Media, curated by Syed Mujtaba Rizvi, was vandalized. This inspired the organization to produce the largest ever consolidated show of Kashimiri contemporary art entitled re-stART, later in New Delhi. Ever since then, the core philosophy of the organization – to explore the changing of traditional artistic practices, as well their relationship to contemporary culture and globalization – has been strengthened.

The residency program will include accommodations, a return ticket to the site in Srinagar Kashmir, food, production costs to the maximum amount of 680 Euros, and two studio spaces. The two installations produced during this collaborative experience, which will be influenced by Kashmir’s unique geography, society, politics, and culture, will be exhibited at the end of program. In total the residency will take place during eight weeks from June 1 to July 31 2016. Applications by international artists will be accepted until April 15, 2016.