As the snow began to melt, I walked along the simultaneously overwhleming and charming Adalbertstraße on the way to Ming Wong’s studio. I was craving Sahlep drizzled with cinnamon powder from the bakery on the left, and could even smell it in the air. Then, the idea of a beer under the disco balls at Südblock attracted me. This push-and-pull of Kreuzberg is what makes the neighborhood bewitching – a typical love-hate relationship. 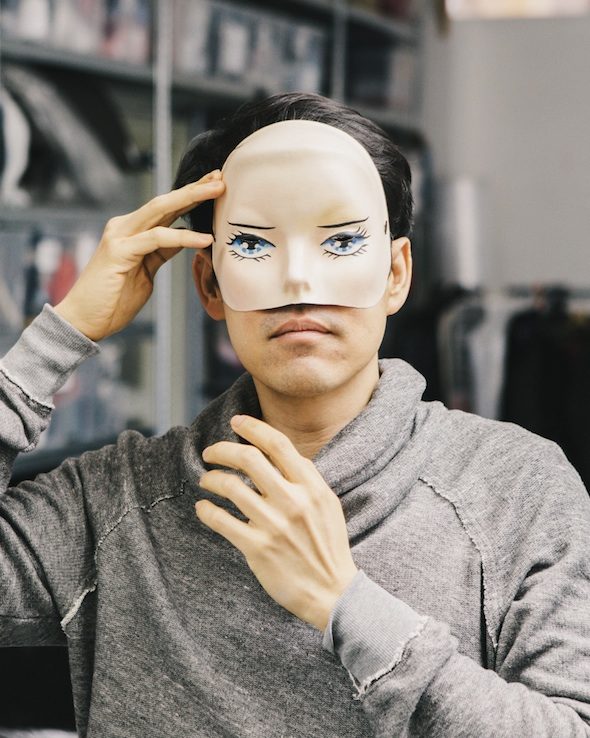 In a building off the courtyard, Ming Wong shares his studio with a group of other photographers, designers and artists, under the name Muscle Temple. In the ample space, potato soups are cooked together in the kitchen and they’ve been known to throw a party from time to time. In contrast to the street, it’s calm inside. Wong travels a lot, from New York to Hong Kong to Australia or Singapore, but he usually comes back to Kreuzberg for the last edits of his films. In one of the bright rooms, sewing materials and make-up, garments, skirts, dresses, pants, shirts, high-heels or Oxford shoes, and wigs for Wong’s dazzling costumes are ordered in plastic boxes alongside film equipment, books – mainly on the history of cinema – and two computers, a mirror with wings hung in the middle. 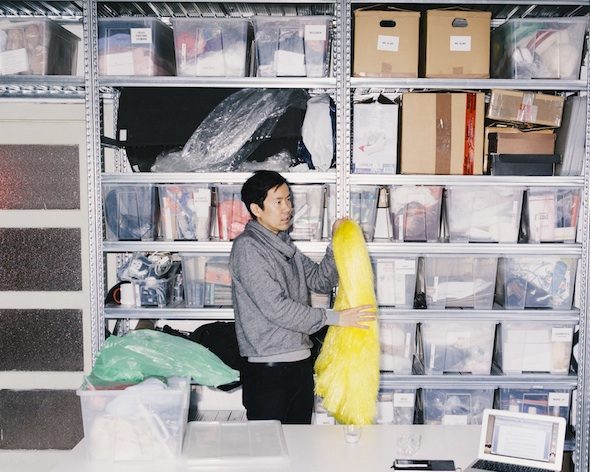 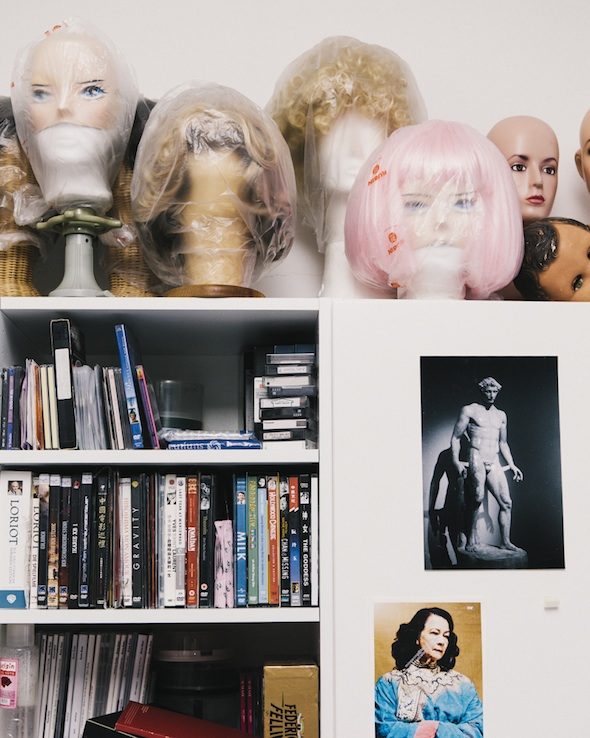 Recently, an article on Vogue Us, ‘Behind Lena Dunham’s Hillary Clinton Campaign: How a New Generation Is Reinventing Political Style’, chewed over fashion and politics in the digital age. Without a doubt, a certain style – even just a white t-shirt and jeans – reveals a lot in terms of identity. Self-representation is political, indeed. Similarly, for Ming Wong, costumes are significant elements in the process of reviving several characters from the history of film and performance such as ‘The Guest’ in Pasolini’s ‘Teorama’ (1968) or the transgender diva of Turkey, Bülent Ersoy. Wong blends and performs genders, identities and temporalities. Usually, the artist re-enacts all characters himself: “self-seduces, self-kills; self-loves” in his words. Using costumes and temporality, the impersonator defies patriarchy/heteronormativity and points out the problems that occur as a result. In ‘Me in Me’ (2013), he performs in drag the lonely souls of three Japanese women from past, future and virtual, who survive despite a suppressive social system. ‘Angst Essen/Eat Fear’ (2008), in which Wong re-enacts scenes from a Fassbinder movie, addresses issues of immigration in European society.

The method Wong uses to censure against identity and gender constructions is reminiscent of Renate Lorenz’s theory of transtemporal drag: that a body (of work) drags in/through class, ethnicity and time. Especially in Wong’s recent project ‘Cantonese Sci-Fi Opera’, which recently took place in Hong Kong, the aspect of temporality became even more apparent. “I know it is so far-fetched, but actually it’s very logical”, says Wong, in response to my questioning looks demanding a link between Cantonese Opera and Tarkovsky’s science fiction film ‘Solaris’ (1972). 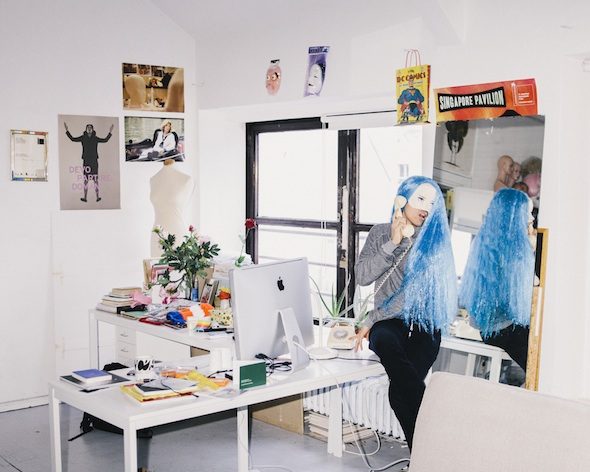 Throughout his research on the history of Chinese cinema, for a former project ‘Blast off Into the Sinosphere’ (2014), Cantonese opera-cinema attracted Wong’s attention. “In the 40s, 50s and 60s opera and cinema had a love affair in Hong Kong”, explains the Singaporean artist who has Cantonese roots. As a result of civil war, Japanese invasion and WWII the majority of China migrated to Hong Kong, where a hybrid of arts emerged. The nation-building politics of the People’s Republic of China led the Cantonese to struggle against the danger of cultural erosion. As a result, the proliferation of language – in this case, the translation of a Western story into classical Chinese by a Cantonese Opera writer, and back into English by the artist – becomes even more political. “It was really beautiful to see that Chinese literature was used to express this theme of speculative existence: I’m a mirror of your conscious. No one would ever do that in Cantonese Opera, as language is very classical, especially in terms of singing.” says Wong. In a similar fashion, science fiction was seen as pseudo-science, that wasn’t good for the revolution of Communist China. On the one hand, Cantonese Opera and science fiction share a common past of suppression and condemnation by patriarchy. On the other hand, according to Wong, “Solaris, the story itself, is very melodramatic”, and has a theme that can easily be adopted to Cantonese Opera. “Therefore, they fit together naturally.” 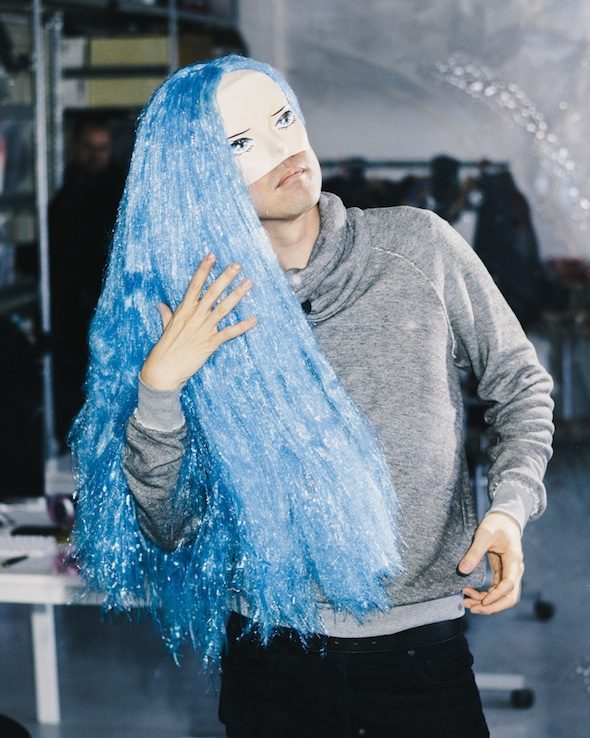 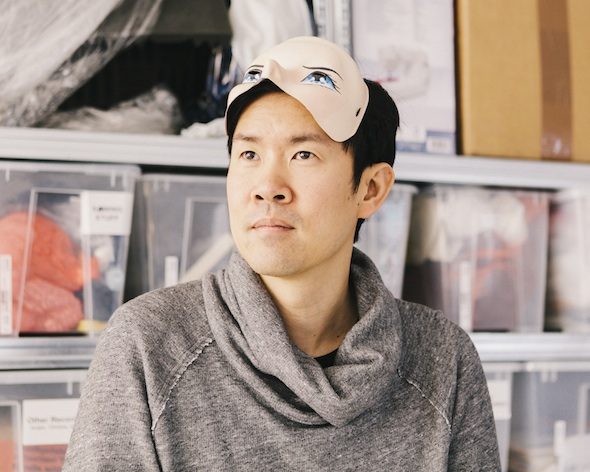 Costumes for projects are usually designed by the artist himself. Classical water sleeves of Cantonese Opera singers turn into long strips of fabric hung from wrists, enhancing certain movements. A traditional wedding dress with beautiful embroideries is cut into body suits for another character, Priscilla, in ‘Aku Akan Bertahan/I Will Survive’ (2015), presented in the 8th Asia Pacific Trennial of Contemporary Art. Based on the films ‘Priscilla Queen of The Desert’ (1994) by Stephan Elliot, ‘Picnic at Hanging Rock’ (1975) by Peter Weir and ‘Walkabout’ (1971) by Nicholas Roeg, ‘I Will Survive’ is a multi-media installation of a lip-syncing performance in drag. Music, played with bamboo instruments by an Indonesian street band based in Jogyakarta, covers the famous song ‘I Will Survive’ in Indonesian Pop style and hip-hop. Four performers, including Wong, jubilantly dance traditional Jawanese, spiced up with Beyoncé-style moves. Reminiscent of a magician pulling a rabbit out of a hat, Wong, the temporal drag master, opened one of the plastic boxes in the studio. Glittery raphia wigs for the project – in green, yellow, blue and red – triggered a quick makeover session.

Inevitably, I asked about Bülent Ersoy. In light of her recent political shift towards the ruling government of Turkey, Wong doesn’t feel drawn to Bülent Ersoy anymore. In the New Year, besides the new episodes of the Chinese sci-fi opera, Wong will prepare a show in France in relation to a previous work ‘Next Year/L’Anneé Prochaine’ (2015), influenced by the French new wave classic ‘Last Year in Marienbad’ (1961): “You don’t know whether it is Paris or Shanghai; past or future; rich or poor. Everything’s all mixed up.”

I look around one last time. Some weeks ago costumes of all colors were scattered in the same space – now, everything is tidy. I imagine Wong’s reflection in the mirror, with folded costumes, crumpled sketches and open books, contemplating his next projects.

Göksu Kunak is a freelance writer based in Berlin. Besides being one of the editors of mono.kultur, she contributes to Ibraaz as an Editorial Correspondent. Soon, she will be writing her PhD on queer chronopolitics and performance art/contemporary dance.