Ever feel like this city just isn’t Ber-Bling enough for you? Like it has lost much of that former early 2000’s consumption-based, hyper-sexualized shiny MTV swagger that it never really had in the first place? Sounds like you need a little more Zeix in your life. In the exhibition of French, Berlin-based artist Jérôme Chazeix, Zeix Lab Berlin, all that glitters is gold, and all that is art speaks – right? At SomoS Art House a cacophonous layering of gold plated plastic, flash-photography, pop-synth music allusions to divinity, is mirrored by an equally disorienting amount of political directions, taking on gender, capitalism, fetishism and and authenticity. The interplay between these poles seems to satirize Berlin’s popularization of niche cultures and their seemingly empowering effect towards correcting unequal power dynamics – suggesting that perhaps Berlin’s artists are much more akin to bland and moot American former mega-personalities such as VJ Carson Daly than even the artists themselves realize. 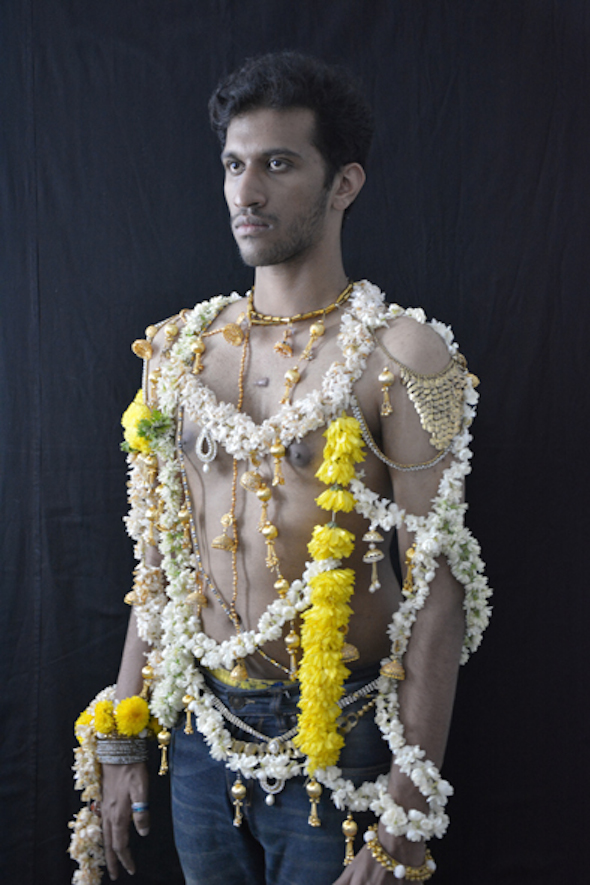 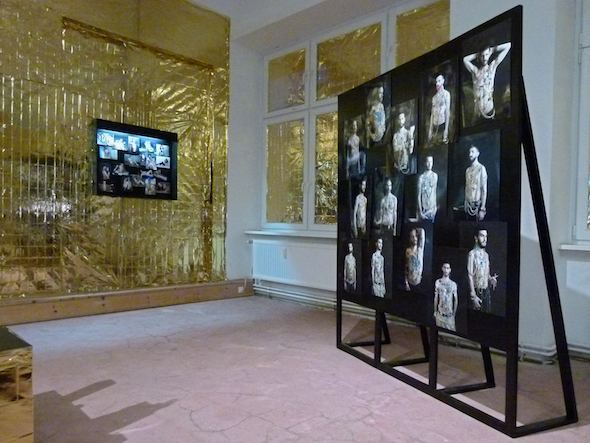 The industry which presents itself as the reflection by which Berlin’s culture can be critiqued, is the vain and materialistic obvious first choice: fashion. Curated to give the experience of being in an overly decadent, yet cheaply-executed boutique, this fashion aesthetic oozes from many of the pieces and even the gold and silver metallic backdrop that envelopes the walls of the entire exhibition. A photographic box which contains men in drag, caught in imposing and seemingly empowering beams of flash-photos made at night, was inspired by Jérôme Chazeix’s previous exploration into the industry, beginning with women as a source of inspiration.

Now, these images clearly show some kind of strong opinion about the issues of gender, power and sexuality, right? They form a note which is carried through to a neighbouring piece, showing similarly positioned men who has dropped the clothing in favour of adding women amongst their likes. Yet in both cases, amateurish compositional choices, such as a collage-type placement of the photographs, industrial-looking backgrounds, and models which seem to always be caught in a mocking smirk, question not the fashion industry but rather, perhaps, the under-informed artists who attempt to reflect on fashion and other consumer-related industries. What angle should be taken from these pieces: that women and men are now equal and as such do not suffer judgement in wearing each others’ clothes? – If so then why is there no perceived personalization, and why do these empowered men and women camouflage amongst each other and appear to mock the fashion that they are dawning? As it stands, gender and sexuality are questions that are raised, lost and left unanswered in this confusing clash of conscious arrangement and supposed boldness. 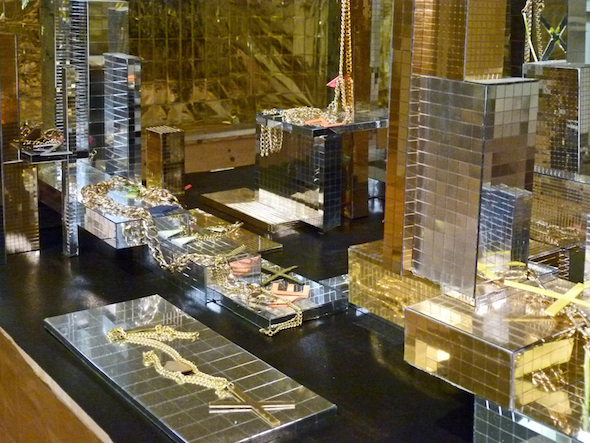 Two installations take part in a similar dialectic which questions the authenticity of political messages in art – though in this case they are more cultural in nature. Both contain faux-luxurious gold-coloured plastic and Zeix letters stretch out on long gaudy necklaces, mimicking the former mass appeal of Gucci. As a background to these pieces, there are photographs of men from two different parts of the world. Both also wear aesthetic hints of divinity. While in one installation, it is European men with Zeus-like beards, the other wall shows Indian men some of which also have god-like paint on their faces. Although the bling in each case is meant to slightly tilt in styles, reflecting each culture, what really stands out is that in the eyes of the artists, there is no deep differentiation between the two vastly different ways of life. 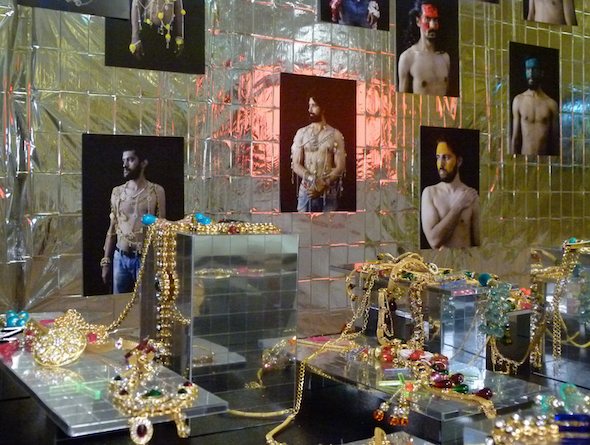 It seems that for artist Jérôme Chazeix fashion is an ideal medium through which the self-mockery of Berlin’s art scene can take place because of the timeless and provenanceless possible parallels between the two. Sex, power, and culture are always going to be themes that will be explored by artists all over the world, but perhaps they are themes which have become so prevalent – particularly in Berlin’s fetishistic and hyper-independent scenes – that they no longer say anything of added value. To explore the depths of 10 years of Zeix further, you can visit Jérôme Chazeix’s solo parodic-exhibition on at SomoS art house until January 30.