This February acclaimed architect Liam Young brought his storytelling event ‘Hello, City!’ to the transmediale festival in Berlin. Like a modern day prophet Isaiah he uses the medium of film to cry out in the wilderness about the destruction humanity is headed towards if we do not repent. Young laments in his real-time cinematic narration that the world used to be measured in relations that referred to our bodies, such as feet and paces. “Today there is nothing of ourselves left in cities.” Using a broad range of media, from drone footage through to YouTube clips, he traces the ways in which technology is estranging us from our identities as citizens, turning us into oblivious consumers instead. According to him, we may soon become pixelated dots on the cubist painting of the city. We spoke to Young about his intentions behind the project.

TL Andrews: Why did you leave traditional architecture?

Liam Young: I became increasingly frustrated with the slow pace of building as a practice. You might spend five or ten years on a project but by the time it’s completed the world that you designed it for is totally different.

I was interested in ways that the architect could operate with more immediacy. I wanted to develop work that could engage with contemporalities of an experience in a way that buildings didn’t.

We are also at the point in history where the conditions that shape our experience in cities are no longer situated in the physical realm. Cities used to be defined by physical infrastructure, now technology has much more of a role in how we live out our lives. So I started operating in spaces that were about engaging new technology. The soft systems of cities, as opposed to the hard systems.

New City: The City in the Sea from liam young on Vimeo.

TLA: Why did you choose film as your medium?

LY: What we do is work in the currency of stories. We tell stories about the world, about cities, about spaces, about our relationships to technology and what they could mean. We use those stories as a way of disseminating them to wider audiences so that we can get people talking about the kinds of cities and futures they want to be living in.

We operate in the space of fiction because it is the way our culture shares and disseminates ideas, so we co-opt forms from popular culture – film, animation, stories, documentaries. We try to use those forms like a Trojan horse to insert critical ideas about architecture, cities and technology.

Often architects get stuck in a dark room talking to other people in the same discipline. The future is a verb, not a noun. It’s not something that happens to us. We’re all active agents in changing what it is.

A Drone Orchestra- Making of Documentary by The Creators Project from liam young on Vimeo.

TLA: It seems like your view of the future is quite dystopian, was that intentional?

LY: I think my view of the future is one of complexity. I think that technologies aren’t going to solve the world’s problems. What they do is exaggerate and extrapolate the contradictions that already exist. If the world that I’m projecting seems dystopian it’s only because the world we are inhabiting is that dark. The work that I do in terms of thinking about the future city isn’t about prediction. It’s about a way of engaging with the world as it is.

TLA: What era or epoch do you think architecture is in right now?

LY: Traditional architecture is a discipline on fire, if it doesn’t radically re-invent itself it’s going to be reduced to a boutique craft industry. Architecture is becoming increasingly marginalised in terms of its capacity to effect change. Architecture has been a tool of dictators and despots. But the things it talks about – spatial relations and how we engage with each other in cities – are really, really important. To only talk about that through a built medium is bizarre.

TLA: What do you see as the future of architecture?

LY: Architects are going to diversify, architecture will occupy a series of allied disciplines to give birth to things like, “the architect as curator”, or “the architect as a politician, editor, urban strategist and technologist”. I don’t think that is a weakening of what architecture is, it’s a strengthening of it, because it means we get to have more influence in the professions that are shaping our world.

TLA: It seems that this level of community engagement does exist, for example, in the designing of a public park. What else do you think is missing?

LY: I’m speaking beyond token gestures of community engagement. Our experience in the park is more conditioned by the mobile device in my pocket or whether or not that park has free wifi than any discussion about the physicality of that park.

TLA: Many of the dangers you talk about apply to affluent cities. What about poor cities in developing countries?

LY: I think certain kinds of technologies which are the domain of the ‘West’ have become democratised to such an extent that they are everywhere. Part of my practise is to go out into the parts of the world that aren’t typically included in the dominant media narrative to explore how technologies are trying to affect these spaces.

You do see extraordinary forms of adaptation here. For example, in Africa they might not have smart phones, but they have text-based phones. As a result there is a new economy of text-based banking. Everything becomes operated through the simple text.

Also a lot of the technologies of the West are produced in these spaces, it’s still a relationship to technology, whether they use it or not. It’s impact may not be direct in the sense that people are running around with smart phones but technologies that we think of as being part of the wealthy world cast shadows across the planet. 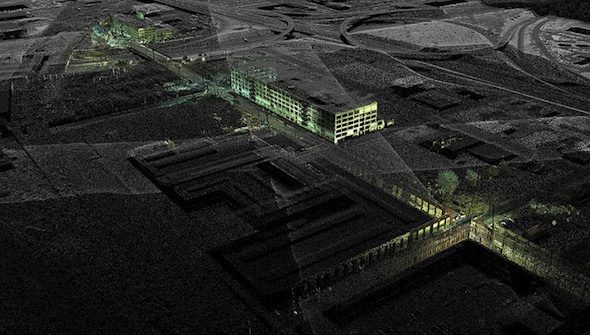