The archetypal cowboy is an isolated figure. Rootless, drifting along a kind of endless Euclidean plain into an unreachable sunset, the cowboy, for a certain generation, may have worked on the same ranch as the Existentialists, but his Stetson signified an entirely different worldview than the beret of his philosophical compadres. Alex Turgeon’s exhibition at the Kunst Werke, Even Cowboys Get the Blues, reexamines the mythos of the cowboy as an icon of individuality, masculinity and heroism. 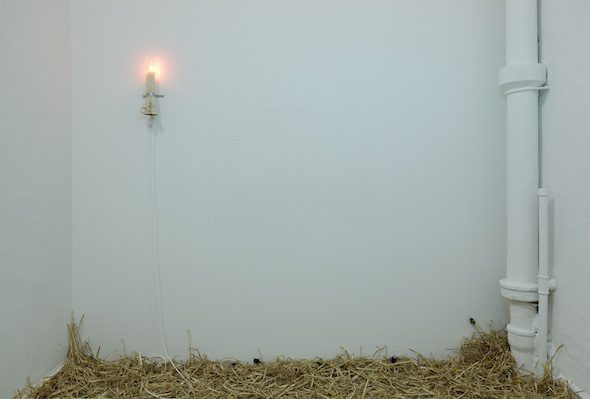 Turgeon’s longstanding interest in language and the chains of signification and communication it underwrites represents a major current in the show, not least in the melancholic Shakespearean sonnet by Turgeon that is printed on the window ledge outside the door of the KW’s 3 ½ space. The installation turns the room itself into something like what Alejandro Jodorowsky’s barn might look like if he’d turned rancher in his golden years. Smoke billows from behind the door, and the floor is covered in a sparse scattering of straw around a mirrored plinth. Resting on the plinth, constructed from the wood of the walls of a former KW exhibition, is a basket containing two supremely suggestive eggs; one is filled with rose petals and the other with Canadian pennies. The latter egg perhaps reflects Turgeon’s own biography as a Canadian artist living among the strange (single) currencies of Europe, or possibly even the legacy of such Canadian cowboy icons as Lorne Greene, Pa Cartwright on the long running television western, Bonanza. Across the room, an electric light in the shape of a candle burns hermetically, estranged from the smoke on the opposite wall. 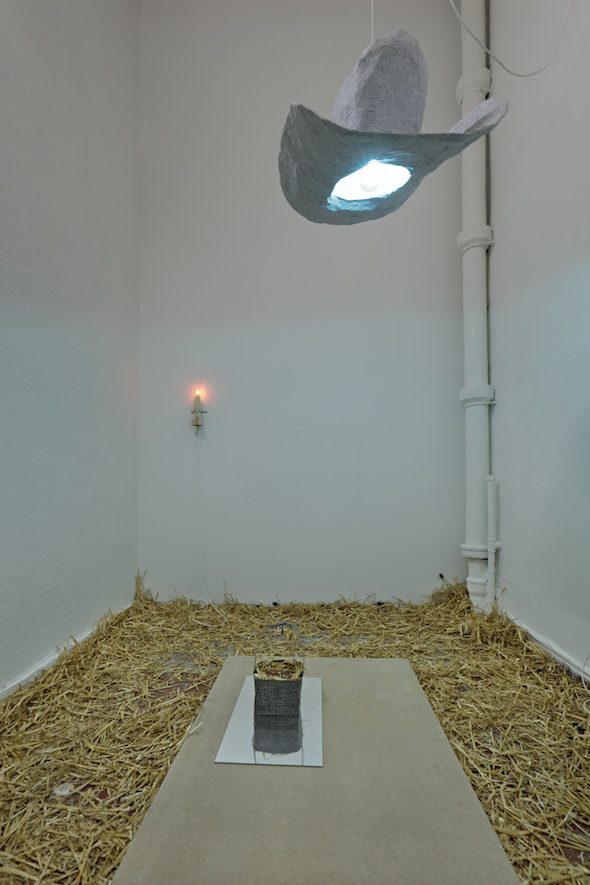 For such a spatially compressed show, Even Cowboys Get the Blues is rife with moments of intellectual and aesthetic vertigo. Take, for example, the floating, headless ten-gallon hat that hovers above its own reflection in the mirrored plinth. It’s an uncommonly fragile looking bit of cowboy attire, but it looks like it’s already spent a fair bit of time at the rodeo. The hat and the aforementioned basket below it are covered in words including lines from a poem by Turgeon, intercut with personals adverts from Grindr and Scruff. Follow the sentences and they almost cohere, but never quite. As soon as you get the feel for a narrative, a new one breaks in. The work both embodies and interrogates the way language is experienced in digital media, and it serves as a reminder that even—perhaps especially—in an age of hyper-networked communication, it’s as difficult as it has ever been to make a genuine connection. Thus, the installation has the sense of forlorn valediction, Turgeon’s cowboys are riding off into a sunset they’ll never catch up to, but you get the sense that the artist at least has learned that the journey itself is where the real stories lie. 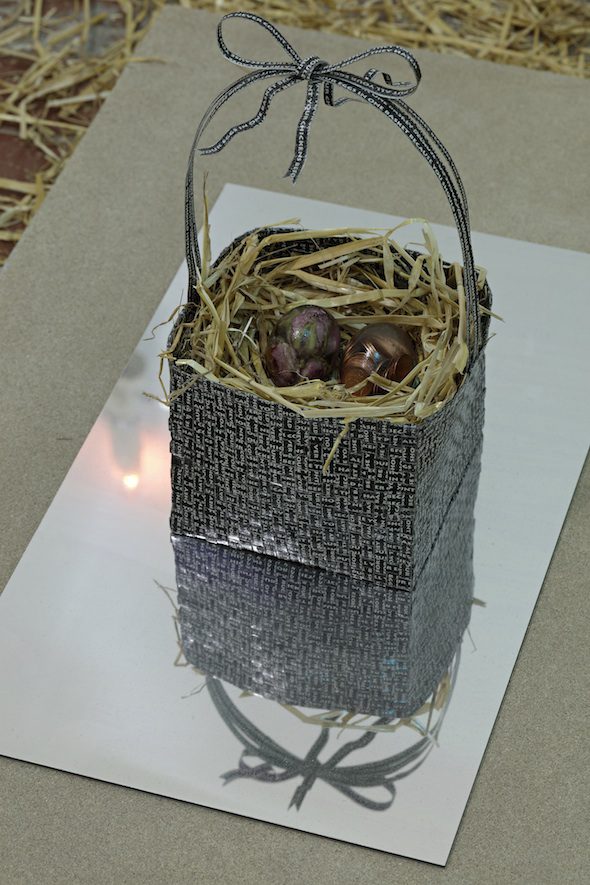