The exhibition of set designer and artist Julian Göthe’s work is fittingly named after Colin Newman’s song Their Terrain. The show is a provocative meeting place for Göthe’s detailed sketches, controversial light sculptures, grungy photography of interiors, and teasing geometric elements. “Build the megalith again, As for history we may be on a winner, Or the chorus, it’s a shame” – Newman heralds the imagery of rebuilding fallen cultural icons, perhaps with the added layer of romanticization. 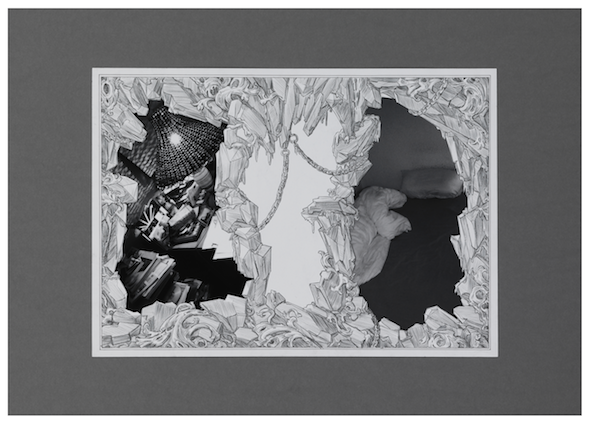 ‘Les Feux d’Artifice pour le Spectracle 1’ is a perspective drawing of structural frames. Some are veiled by transparent materials, which interact with each other such that surfaces are difficult to distinguish. This type of play with perspective is carried on in ‘Les Feux d’Artifice pour le Spectacle 3’, where the shading and texture within the three-dimensional structure do not let viewers distinguish whether the shape is a rectangular prism stretching toward the vanishing point behind, or a pyramid tapering forward. Julian Göthe adds a curious layer to otherwise dry techniques and renderings of space through his ability and insight in manipulating these images. 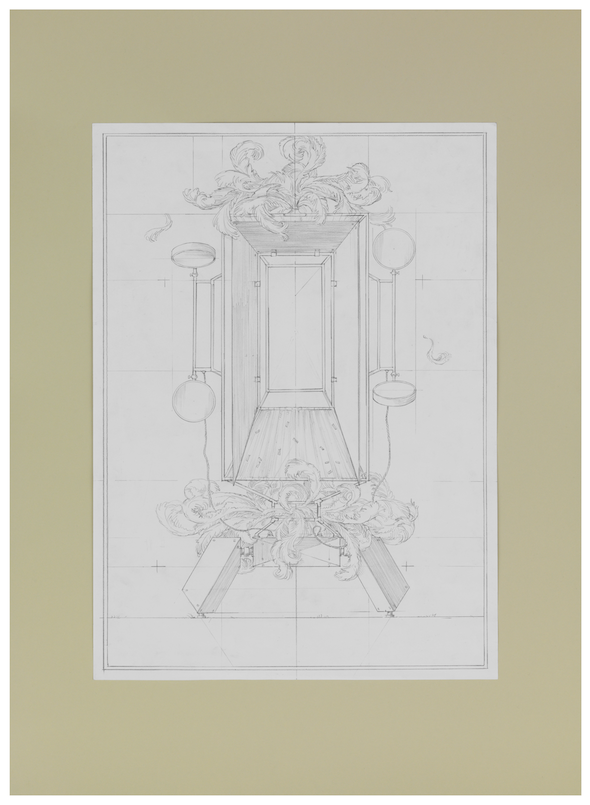 This piece contains mirrors which call attention not only to the question of physical perspective, but also initiate a space for viewers to question their own presence, as well as the that of the artist, who formerly must have stood in a similar spot. His personalization of the composition is further exemplified by the lush, wispy feathers above and below the shape which could be tied back to Göthe’s theatrical background. For the artist, the foundational geometry of his world is not definite, rather it is subject to the whimsical nature of his imagination and reconstruction of his memory.

This confluence of the objective world and the creativity of the artist is brought into a more intimate setting, that of his photography of commonplace sites in homes. Plastic bottles in the recycling, an unmade bed, and a desk cluttered with books and papers are all enshrined by the artist’s surreal graphite motives. The drawn elements of these pieces take up as much surface area as the photographs themselves, eclipsing the images with dynamic motifs. 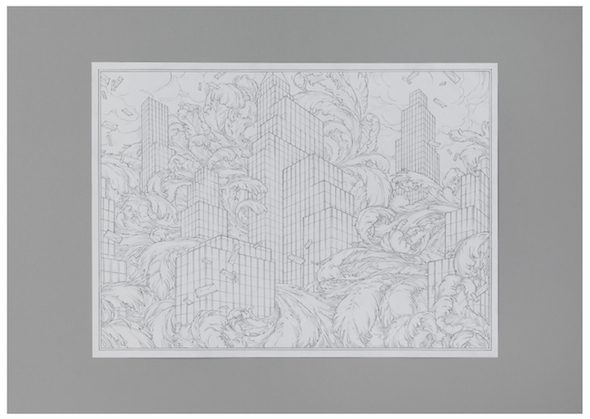 The exhibition’s dramatic elements are not contained within singular spaces, but erupt out into city streets – perhaps as a comment on professional life. Buildings, with uniform crosshatched surfaces, maze through the piece entitled ‘Remove for Improvement 2’. Engulfing the urban scene, we see Göthe’s feathers rushing around the structures, almost smothering them.

The question of just to what extent Julian Göthe is the designer of this world grasps up to the heights of the former World Trade Centres, in his sculpture Fou de Feu d’Artifice. Just as in Colin Newman’s song, Göthe has rebuilt an icon. The artist stretched elastane fabric across metal plate and frames, and then attached feathers in the iconic formation of the Twin Towers moments before they crumbled to the ground. This controversial and absurd juxtaposition, between themes and the melodramatic medium, seems to take the horrific event far out of the political sphere and place it into the aesthetic. The shock value of replicating an event, which marked the beginning of a massive international conflict and the deaths of so many internationally, in orange and yellow feathers, draws the viewer to the thought of just how destabilizing it was to have witnessed these pillars of strength and stability crash abruptly. 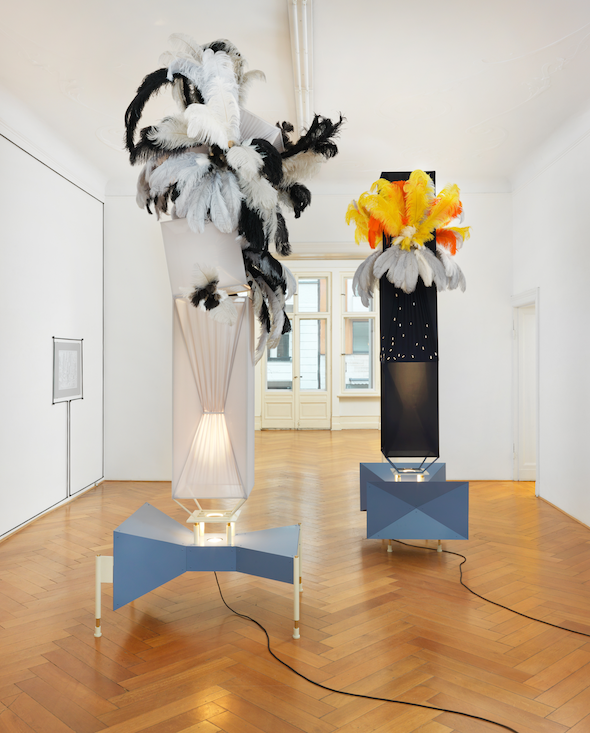 The process of parody and romanticization is perhaps a larger, more apparent part of artists’ such as Julian Göthe’s lives. For him it seems that processes begin at the convergence of creative ability, emotion and memory and are cultivated in the places we call home. From there they seemingly pervade larger parameters that we call home, including our cities and structures. The struggle then becomes: how do people collectively live in a place claimed by conflicting imaginaries, and can the differences between them come together to produce positive results?