At the heart of Anna Oppermann’s ‘Paradoxical Intentions’ lies a concave cluster of mirrors and window panes which are seemingly infinitely replicated and reflected upon in her surrounding kaleidoscopic sketched, painted, textual and photographic ensemble. In spite of the multidimensionality of the pieces, Oppermann offers a mirror selfie which initially seems to lack expected depth, and draws the viewers attention back to the reflective surface. Meanwhile, her renderings of glass represent the medium as fogged over: translucent but not transparent, so there is no looking into or out of them. These features spark the paradoxical debate within the show, by trying to look within, we are pushed back out, and by trying to look out we are rejected and restricted. Oppermann’s ability to make intimate otherwise inanimate or even sterile objects and physical laws gives the exhibition the power to question abstract concepts such as truth, reality and intimacy. 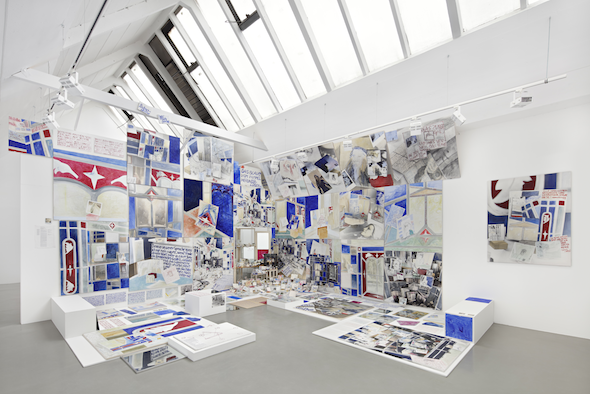 A quickly rendered diagram of the mechanics of optics and reflection, alongside a discursive description, acts as an initial hint at the exhibition’s preoccupation with observation, perception and agency. Light travels from an external object, then is reflected or absorbed and what is left travels to the eye of the observer. This seems to be a struggle for Oppermann: how to cope with a world so alien and mechanical for any individual including the highly sensitive and introverted artist. Her response is a neurotic, rebellious labor of re-examination from various vantage points through multiple media. But to what end?

The metal framing contours of the stained-glass cupboard, mirror and window installation are strewn in various distracted angles in her depictions, radiating out from the centre. Occasionally lines come together to form the words “Das Blaue von Himmel Herunterlügen – To Lie the Blue Down From the Sky”. Perhaps, in the context of her works, Anna Oppermann takes something as foreign to the her as the sky is distant from the viewer and brings it into herself through a process of dishonesty. Perhaps this is why we see a gradient of truth in the exhibition. 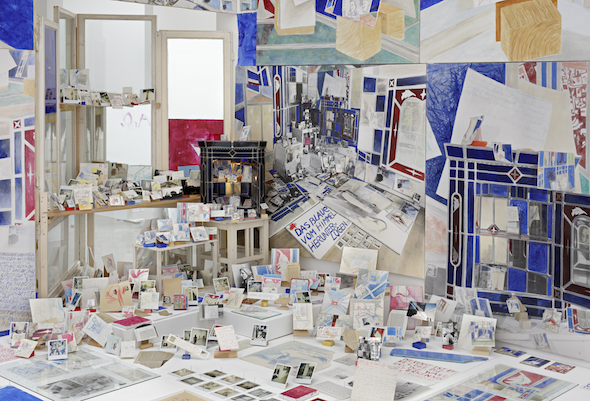 Various forms of images of the now deceased artist, originally from Hamburg, are tucked into the collection. Some of them portal the artist as vivacious and alluring, while others show her older, less attractive and perhaps a little bitter. She appears in a polaroid, painting one of the images of the cabinet. Then a few drawings over the same image appear in a pencil crayon done by the artist’s own hand. At this point of enveloping various regressive images of herself in her art, are her works more or less herself than she is, and how does this process relate to making the world her own? The ideas become as tangled as the various perspectives of her subjects within the exhibition.

A more detailed inspection draws attention to another point. There are photographs of Anna Oppermann setting up the show, however they are not from the current exhibition but from the original installation which opened in 1988. The ability to do so was evidently important to her. Since then the collection of drawings has grown and been rearranged a few times according to its latest venue. The artist is no longer the one orchestrating the pieces in her own vision, and in this case the exhibition’s orientation is even reversed from the last time Oppermann arranged it. With this loss of her power to influence something which is meant to be so intimate to the artist, viewers get an unexpected glimpse into another perspective, that of ideas and collectivity. 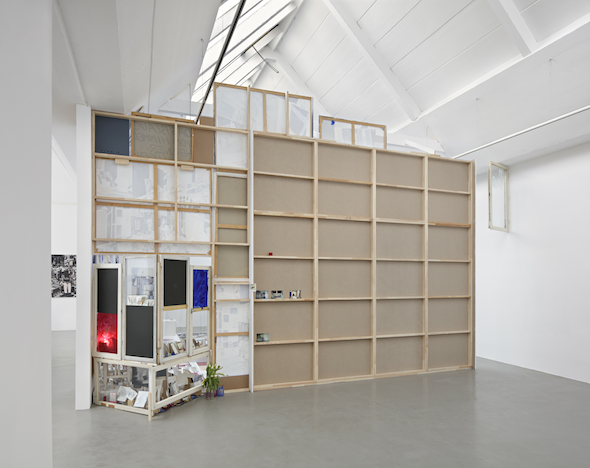 It is not only the exhibition which has changed since Anna Oppermann last interacted with it but also the context. Today the issues art and property are more prevalent than ever before. With the internet’s ability to reproduce so much information from various places around the world, each with its own legal frameworks, the idea of owndership is just as blurred as Oppermann’s ‘Paradoxical Intentions’. People are aware of the subsequent problems now more than ever, evidenced by the recent Open Source movement. Anna Oppermann does not claim ownership of the themes of the exhibition, the idea of questioning truth is as old as time. What the artist adds to it is her own inescapable and inimitable flavour which, through its sincerity rather than authenticity, connects with viewers. At the encounter of Oppermann’s windows and mirrors, what emerges is a playful, gritty and perhaps obsessive bridge to one of humanity’s most illusive and hurtful concepts, truth.