Kevin Faingnaert has made a name for himself photographing obscure communities and sub-cultures. His works include portraits of an underground racing community that operates without any rules (‘Banger Days’), as well as a series on Belgian wrestlers (‘Catch’). We spoke to him about his visit to the tiny eco-village called ‘Matavenero’. The village is hidden behind a remote forest in Spain—it is only reachable by foot via a meandering mountain trail, marked only by rainbow signs. The 60 people living in the community do so completely off-grid—they produce their own food, get rid of their own waste and have almost completely excluded money from their economy. Faingnaert talked to us about the month he spent living with this community. 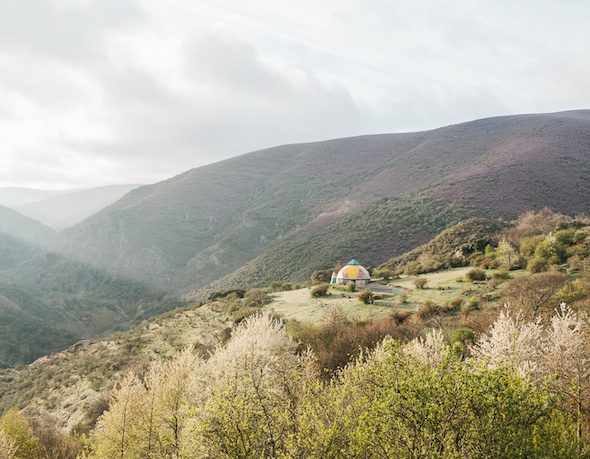 Kevin Faingnaert, Geometric dome in Matavenero // Courtesy of the artist

TL Andrews: Why did you want to photograph the Matavenero community?

Kevin Faingnaert: When I read about Matavenero and their independent lifestyle, I was immediately hooked. They turn away from our modern way of life, which is based on efficiency and consumption, to live according to their beliefs. They built their own village in the middle of nowhere and live off their own gardens. I was extremely curious to see how they live, who they are, what they do and why they abandoned their old life. 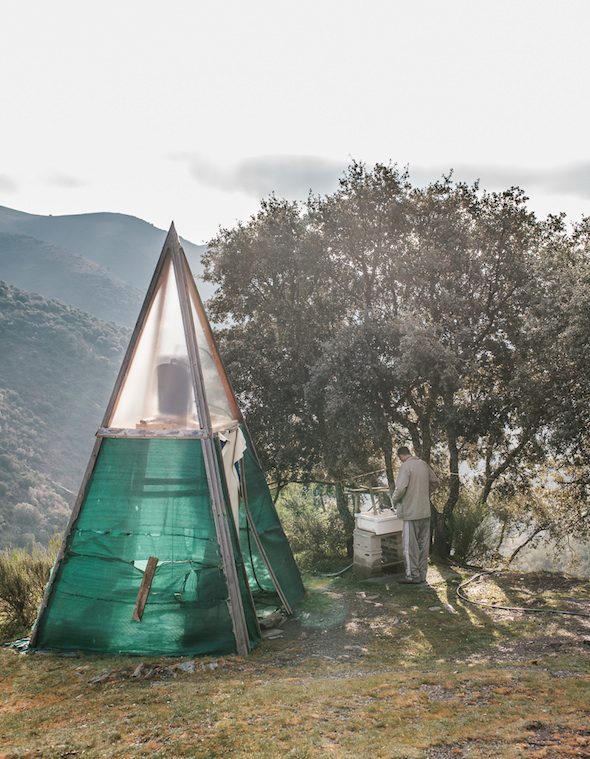 Kevin Faingnaert, Nicolas getting ready for a hot water shower, which works on solar energy // Courtesy of the artist

TLA: What was it like being in an off-grid community?

KF: When I arrived, I was invited to enter one of their houses and I got served with a fresh cup of tea and chestnuts. Everybody’s welcome to visit the village for a couple of days, as long as you respect their vision and help out with communal tasks. So I felt quite welcome from the start. Though I remember a major culture shock in the beginning. I went to India for half a year a while ago, and the Indian culture shock was nothing compared to the Matavenero culture shock. I don’t know why, I guess it has to do with the strong personalities of most inhabitants. You feel kind of boring compared to their lifestyle.

It felt good staying there, being completely shut out of the world. It creates a strong bond between the inhabitants, which I, after a while, also felt. I could not feel anything but admiration for their persistence. They made this place a fairy village, with most irregularly shaped houses, past waterways, little paths through trees, the dome… There is a shared vision to live as sustainably as possible. Everything brought in must be carried by donkey, horse, wheelbarrow, or on your back on a three-hour trek. All waste must be recycled or carried away back downhill. The same plastic bags appear over and over again. Very little money is used, but the same euros go round and round. These are people who have transformed their ideals into deeds and hard work. 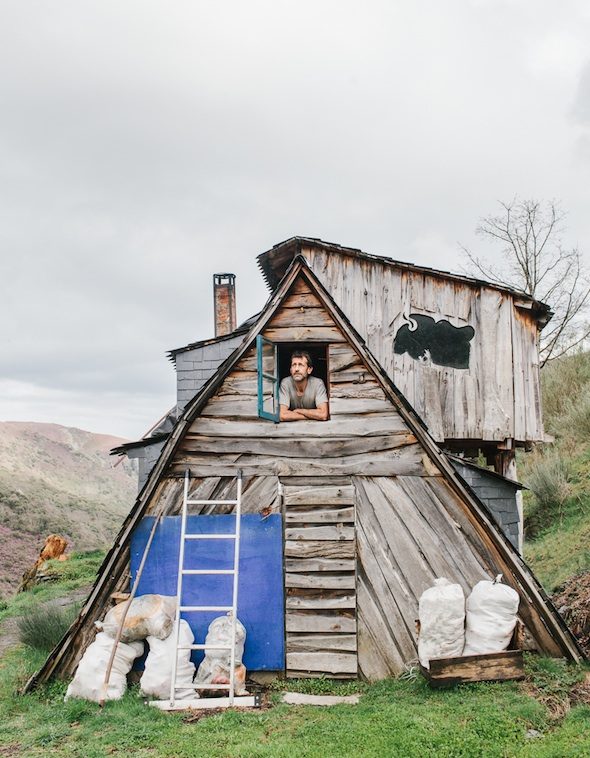 Kevin Faingnaert, Antoni grew up in a nearby Spanish city. 6 years ago he decided to move to Matavenero and bought this house from its former owner.

TLA: How did you go about gaining people’s trust in this case and how long did it take before they could be themselves in front of the camera?

KF: The first week I felt very uncomfortable. I had to adapt to their lifestyle. To earn their trust, I helped people out as much as I could. I worked on the land, mopped the village bar, dug a new canal, fed the donkeys. My magnum opus was cleaning out and organizing the community library. The place was a real mess. Cleaning out the library opened up a lot of doors. Bringing Belgian chocolates along also helped a lot.

Most people in Matavenero don’t like the idea of being photographed though. After I got to know almost everyone, I knew who I could photograph. While some of the villagers like to share their vision with the world, and like to cooperate on projects like mine, most of them rather want to stay isolated. Lately this is creating an ongoing debate as to whether Matavenero should remain closed to the world or not. They are deciding if they should consolidate their community and their shared vision, or whether they should remain open. The portraits I have taken are from inhabitants whom I could call friends. People with whom I shared campfire stories, with whom I went on morning hikes, with whom I went to communal singing.

TLA: Much of your work looks at sub-cultures or unique communities. How do you approach representing these groups with respect, considering that many people might instinctively dismiss them as weird or alternative?

KF: I guess it’s all about how you approach your subject. It’s important to show that you respect and honor their lifestyle. I would never want my subjects to feel that I’m voyeuristically taking weird pictures of them. I work in a collaborative way. I always ask for permission from every person I photograph and explain my intentions to them in great depth. I want the people I photograph to trust me and feel comfortable. In the end I want my subjects to be proud of the final story too. 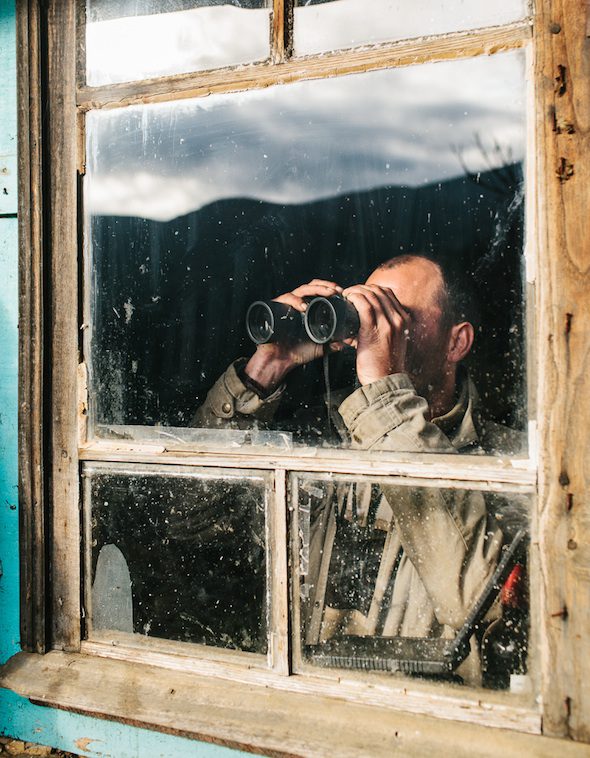 Nicolas lived in Valencia, before moving to Matavenero only 10 months ago. All new residents are expected to spend at least one year living in Matavenero before being eligible to stay in the community. Nicolas is a bird enthusiast and spends every morning observing birds.

TLA: Given that setting/environment plays such an important role in a portraits, how do you decide where to shoot your subjects?

KF: It’s hard to say how I decide where to shoot my subjects, because it’s different every time. I like to shoot people in a setting they feel connected to. I like to photograph people where they live, even when it means their house isn’t as photogenic as the house next door. I almost never take staged photos, so I take my time to look for a great background, a kind of light that suits the subject, and so on. The subject and the setting have to match. That’s my primary concern. I almost never look for extra meaning in the setting. 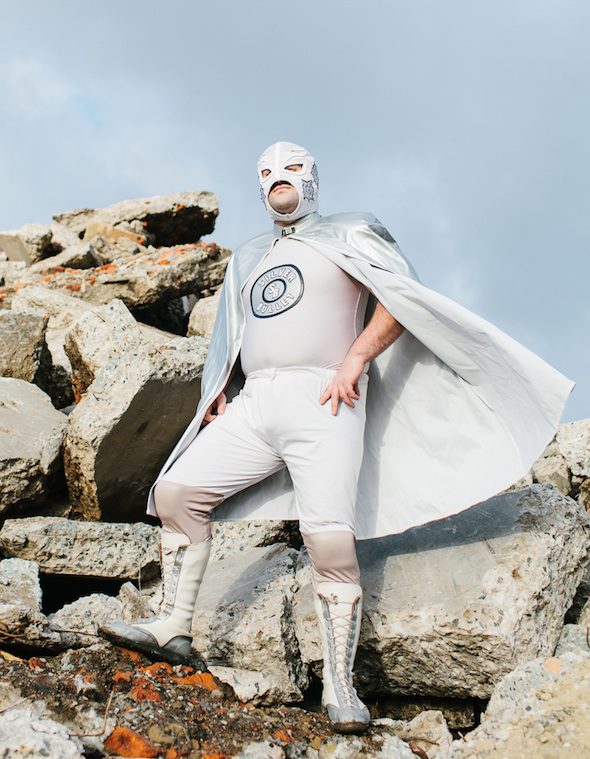 TLA: What are some of the technical considerations you have in undertaking a month-long shoot in a remote place—one in which everything is uncertain or unfamiliar to you?

KF: I always pack as little as possible. I only carry my camera, a couple of prime lenses and a couple of memory cards. No laptop, no strobes, no expensive stuff. I don’t like editing photos while on a project anyway. I only focus on meeting people, listening to stories, and shooting.

TLA: What future projects are you working on?

KF: I’m wrapping up a new project on the Faroe Islands at the moment. The Faroe Islands are an archipelago of islands in the Atlantic Ocean, halfway between Scotland and Iceland. I’ve been documenting life in villages with populations of roughly 10 inhabitants. I’m working on the photos right now and hope to release this project in a couple of weeks. 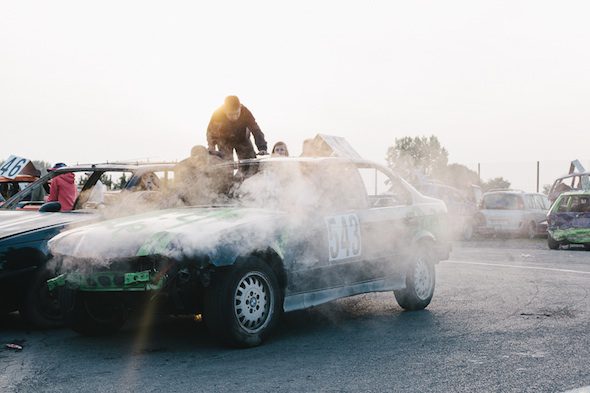