Artists April Gertler and Adrian Schiesser have been hosting art exhibitions in the intimate spaces of homes since 2012. Initially the project space, called Sonntag for the day they always take place on, were held in Adrian Schiesser’s apartment, but now the event is hosted in a new apartment each month. To further immerse viewers in the intimate atmosphere, the two also bake a cake of the artist’s choice. In the past they have hosted Anne Duk Hee Jordan and Charlotte McGowan-Griffin. In April, you can stop by and experience Uli Aigner’s favourite dessert alongside her works, and if you like you can stick around a while longer to chat with the artist too. 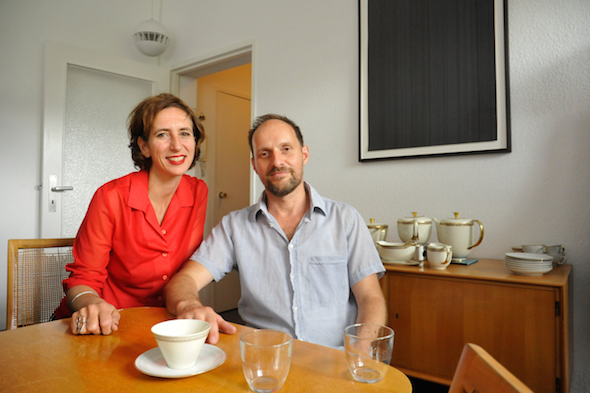 Jeremie Gerhardt: Photograph of April Gertler and Adrian Schiesser, 2014 // Courtesy of the Photographer and Sonntag

Alice Bardos: Can you talk about the initial inspiration for the Sonntag concept?

Adrian Schiesser: In 2011, I moved to Berlin. I was new in town and thought it would be a good way to meet people, to invite them around to my apartment. As I moved here I was given some furniture and a complete crockery set. So I had 35 cake plates, 2 coffee pots and 2 teapots. I thought: “Wow, this is perfect, I’ll do something on Sunday and invite people around for cake.”. I like eating cake and wanted to meet artists like myself. I met April shortly after I had the idea, I told her about it and she thought: “Brilliant, let’s do it.”.

April Gertler: That’s the essence of it. Well, that’s how it started in September of 2012. It kind of corresponded to a project I did in Frankfurt when I was studying there for a semester at the Städelschule and I didn’t know anyone. My strategy was to bake a cake and invite one person at a time. I would also take their portrait, though it wasn’t really a project. I just found myself doing it repeatedly and getting to know people that way. So when Adrian suggested the idea I thought: “Oh well, that’s interesting. It kind of reminds me of this thing I used to do.”. I really love baking, and so does he. We came together in his apartment and were doing it there initially for two years. Then we got a threat of eviction.

Adrian Schiesser: They said we were holding a public event in a private apartment and that I was over-using the stairwell. We used to have around 40 people at the events in those days, now it’s more like 60 to 90.

April Gertler: After that we didn’t really know what to do. Everything conceptually matched before. I spent days looking for a font for the logo which ended up being from the sixties, that corresponded to the furniture of the apartment from the sixties, which matched the whole apartment, which was also made in the sixties, and it just matched with what Sonntag became for us. Then we decided to go nomadic. So we now travel around the city, and people will offer their apartments at events. It’s never the artist’s apartment, they would know the nuances of the space too well. The idea is for them to come into a space they don’t know and then have a chance to do something kind of fresh. 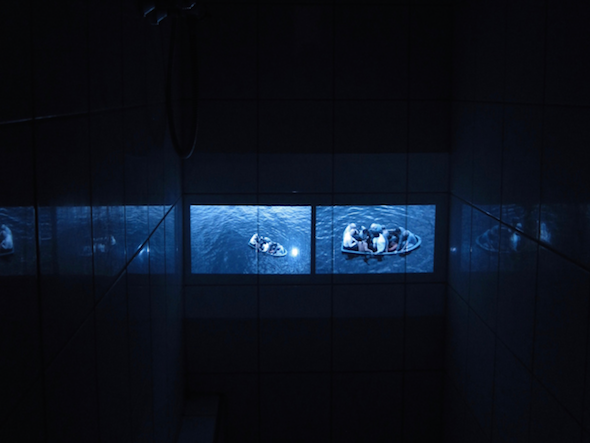 AB: With so many variables, how do you actually organize these events?

AS: Well first, we choose an artist, sometimes they approach us, or are suggested to us or we just seek out people who we are interested in. For the upcoming Sonntag the artist was actually a guest before and realized that they wanted to show with us. So then we ask the artist for their favourite cake recipe, and then we try to make it, to see if we can make it as they remember it from their past. Sometimes it doesn’t turn out quite right, so we manipulate it a little bit – we are not professional bakers. 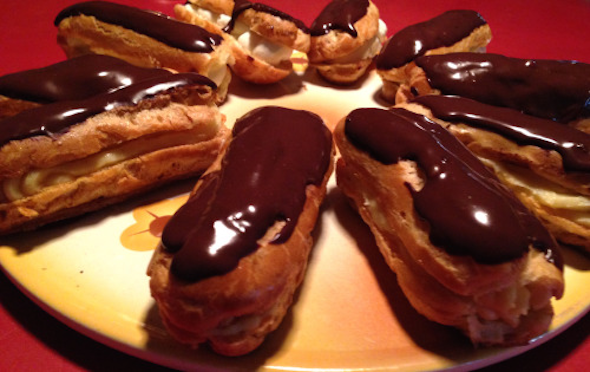 AB: So where did the cake idea come from. Is it a passion for either of you?

AG: There are a lot of layers to the cake-making. Philosophically and emotionally, the cake is really an essential part of Sonntag. People may initially laugh at the importance of the cake, but actually it has a lot to do with memory. The taste and smell of something can take you back to a specific time in your life, and we actually take that really seriously as a concept. Sometimes it’s the artist’s mother’s recipe, so if we are lucky we can get it and make that cake. Then the question is: is it the same as when your mom made it when you were six? If the artist thinks “yeah, it’s the same”, then we feel we’ve succeeded. It’s a part of our collaboration with the artist and an invitation for the guests to collaborate as well. The implication is that you are going to be tasting a memory of this person. 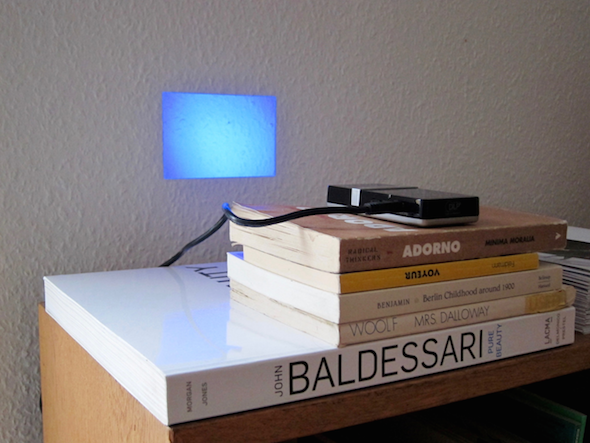 AB: Do you ever encounter any problems with the exhibiting style? It seems like it might be difficult to juggle so many intimate aspects of people’s lives.

AS: Well the biggest problem actually is that often artists don’t realize how exhausting it will be. They often have to spend the entire time talking to people and having really intense conversations.

AG: There is no alcohol at all, which really changes the dynamic. 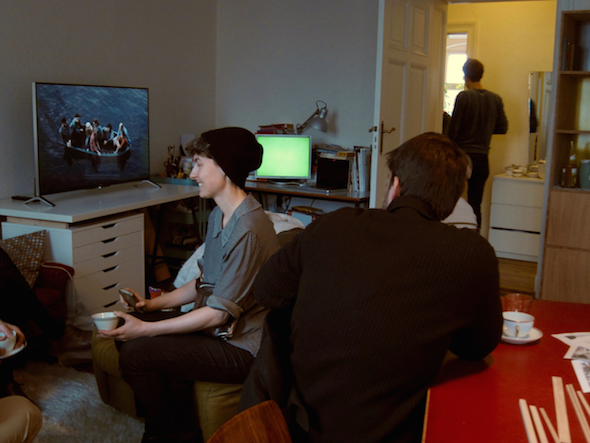 AB: Do people talk more at this event than they would in an art gallery?

AG: Oh, yes – because it’s an intimate atmosphere. Often people don’t have their shoes on. This goes along with a kind of casualness. There is this element of feeling at home, so there seems to be less inhibition to talk to the artist in that context. People bring animals, their children, babies, which also adds to people feeling more relaxed. 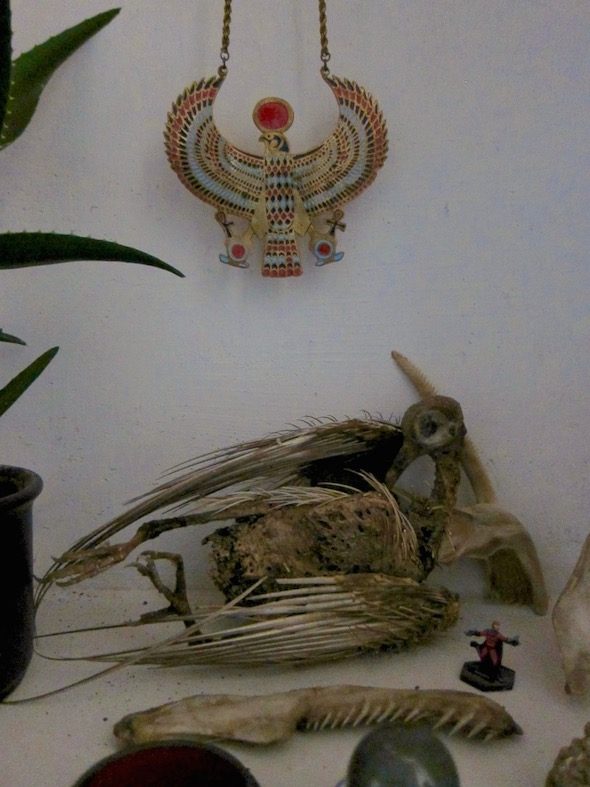 AB: Have there been any conversations which have inspired you personally?

AG: Often we don’t have that much time to speak with the artists themselves. I am really impressed when artists find each other at the events and connect in a way that leads to future collaboration, which happens quite often. Since there are so many art worlds happening in the city, Sonntag becomes a meeting place for that too. Often we are too busy facilitating the event to participate in too many conversations. For example when we see a guest we don’t recognize often we ask them: “Have you been to Sonntag before?” And if they say “No.”, we take the time to introduce the project to them as a collaboration. We say: “We’re in so-and-so’s house and the artist who is exhibiting here to day is … and he/she is standing right there, please go talk to them if you like.” And finally, “their favourite cake is: X, and we’ve made that for them today and you’re welcome to have a piece of it, help yourself.”. 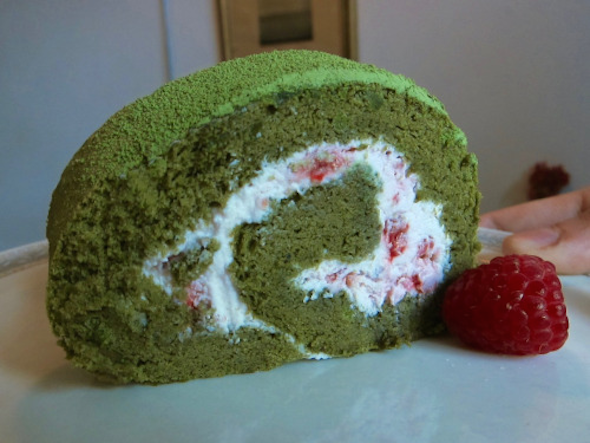 AB: How did you go about the process of networking, starting when the event was initiated in your apartment, Adrian?

AS: We started with Facebook, and then word of mouth. Of course the group is very small. Like a little plant growing more and more branches. It took a long time, but now it’s become quite fruitful. 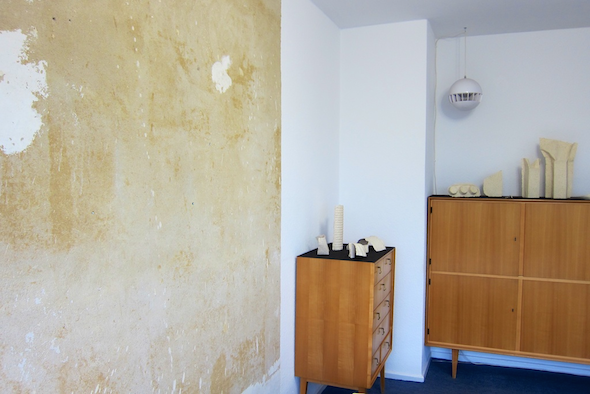 AB: Can you talk a little bit about how viewers experience the art differently when it’s displayed in a home, which comes with its own clutter?

AS: We had an artist, Anne Duk Hee, who recently used elements of the apartment and integrated them into her works. It was not clear anymore what was the art work and what was the home.

AG: We had another artist, Julien Villaret, who took the wall paper from the walls. He left the walls naked. Then he made new paper. He bought cake forms from the flea market and made paper sculptures using wet pulp. The result was this model city which looked really great. His cake, a Mille Feuille, worked well with the concept of his art. 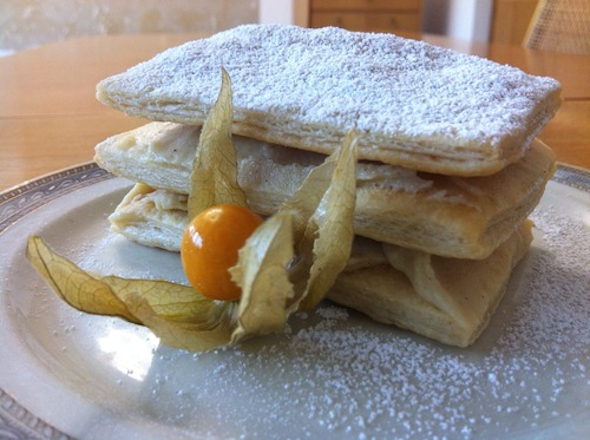 AB: So have any of the aesthetics of the original exhibiting style from when it was taking place in Adrian’s apartment remained the same now that the events are hosted in different apartments?

AG: Well one thing that we always bring with us are those original cake plates and tea cups. So that has become the visual thread. That actually was the impetus for the project, anyway. We’ve done the project in Amsterdam, Copenhagen and Paris and it’s always been the same plates and cups. 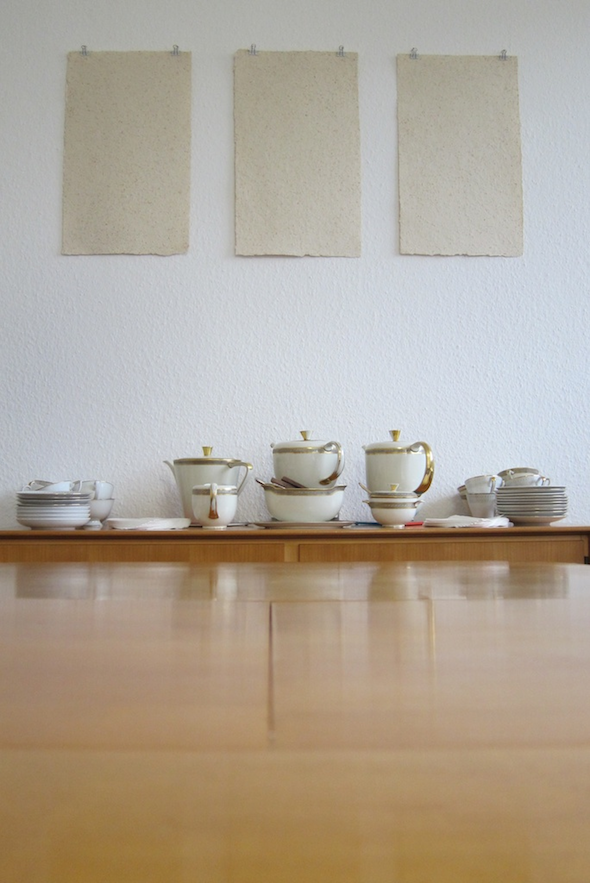 AB: What direction would you like Sonntag to take in the future?

AS: It will soon be our 39th Sonntag. We are working towards a cookbook. We would like to complete it after 50 events. It will be the artist’s recipes. We’re hoping that the artists will also agree to include a new work in the book, because we see the book as a new venue. Also, we got invited to present Sonntag in Denmark. We’ve put forward the proposal of bringing my apartment to the Kunsthal Aarhus. So we are going to rebuild the space inside the gallery using my furniture, to host Sonntag again. We are not sure about the format yet, maybe we will be there for several days and host a different artist each day. We always enjoy hosting Sonntag abroad but it’s always a different experience. The cake and coffee on Sundays is a very German tradition, and not everyone is used to it. As a boy myself I didn’t like it, but living abroad for many years I missed it. Coffee and cake and sitting together in good company, that’s something I really like now. It will be different, of course, in the exhibition context, but it allows more people to see it.