Sébastien Bonin breathes new life into stories inspired by Navajo motifs. His artistic pursuits are now hitting deeper notes, as his focus has shifted from photographing western American landscapes, to alternative forms of exploration of the old fashioned films and comics of the area. He is reproducing the essence of textile patterns through projecting light onto photographic paper, with markers, tape, and overlaying gelatine filters of his design. His works take on the names of films that have drawn on the culture’s material traditions – such as ‘The Brave’, ‘The Hateful Eight’, and ‘A Man Called Horse’. 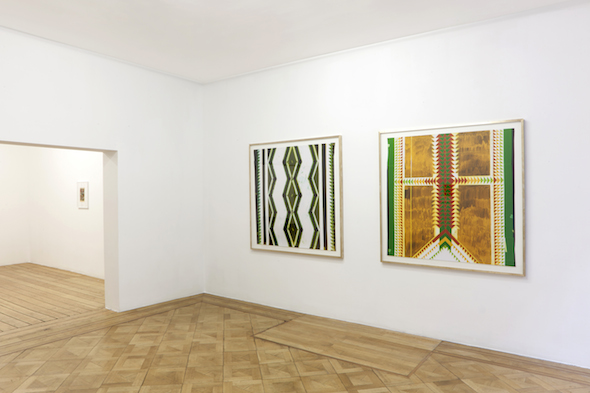 The products are photograms and yield ridged lines, which interact to produce elegant, structural, and almost rhythmic patterns. Perhaps, this is what it would look like if you drew a continuous line around the circumference of a tree’s bark, capturing the profile, and transplanted it onto a white background. The blacks of the prints often subtly fade into pink and blue hues due to chemical reactions evoking a reflection on natural processes. The artist’s fascination attempts to move past issues incurred by politically problematic modes of portraying Native American peoples via his evident focus on the physical elements of the designs.

Ideologically, one can question the relationship between the content and the aesthetic. Does abstraction effectively untether a medium from selected features of its provenance? Bonin’s level of divergence from his inspiration takes him toward admittedly large and general concepts, those of nature and light. By harnessing the latter, focusing it, and redirecting it, the artist’s skills take audiences toward enticement not based on history or politics, but rather mechanics and physics. Though whether this aesthetic regression justifies its potentially controversial implications, in the context of a region once caught up in Karl May’s fictitious and essentialising world of ‘Winnetou’ and ‘Old Shatterhand’, is up for interpretation.