‘Secret Surfaces’ at KW Institute for Contemporary Art is a sensory smorgasbord, as its vast selection of works tackle a complex theme: the production of meaning. The exhibition proposes and explores the idea of surfaces as a site for finding meaning, challenging the clichéd concept of insight and worth being found deep within, between the lines, or under the surface. It asks “must the surface always be superficial?”, locating the surface as the tangible, virtual, and perceptual bridge between ourselves and the world. 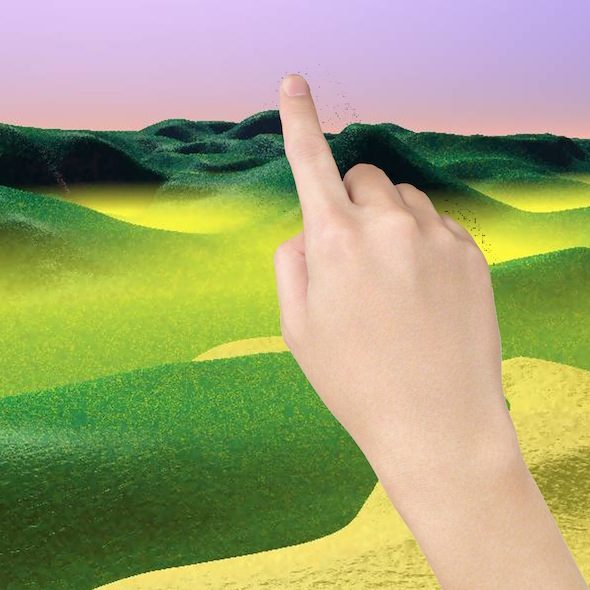 The first work you encounter as you enter the darkened ground floor space invokes an innate physical impulse: the need to investigate unknown and alluring surfaces with touch. Texture is seductive, and Anna Barham’s close up video of the shiny skin of a squid, pulsating with changing skin patterns triggered by a stroking finger, awakens a universal urge. Our obsession with texture is a subconscious drive as we learn from exploring the textural fabric of our physical world. Throughout the exhibition, which is separated into loose thematic groups, texture incites this carnal curiosity. Mimicking the traces of fingertips against a rainy window, Prem Sahib’s resin droplets on gold panels in ‘Those Soaked II/III’ make you want to reach out and touch them. Hollis Frampton’s video of a rotating lemon in candlelight tempts with its puckered waxy surface. ‘Self Portrait (Wetsuit)’ by Alex Israel is an indulgent textural deception, with a surfing wetsuit covered in coarse and rigid plaster. 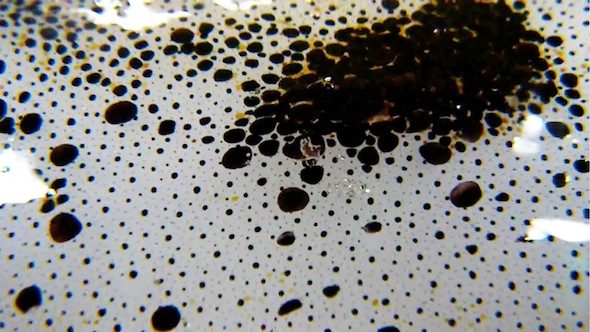 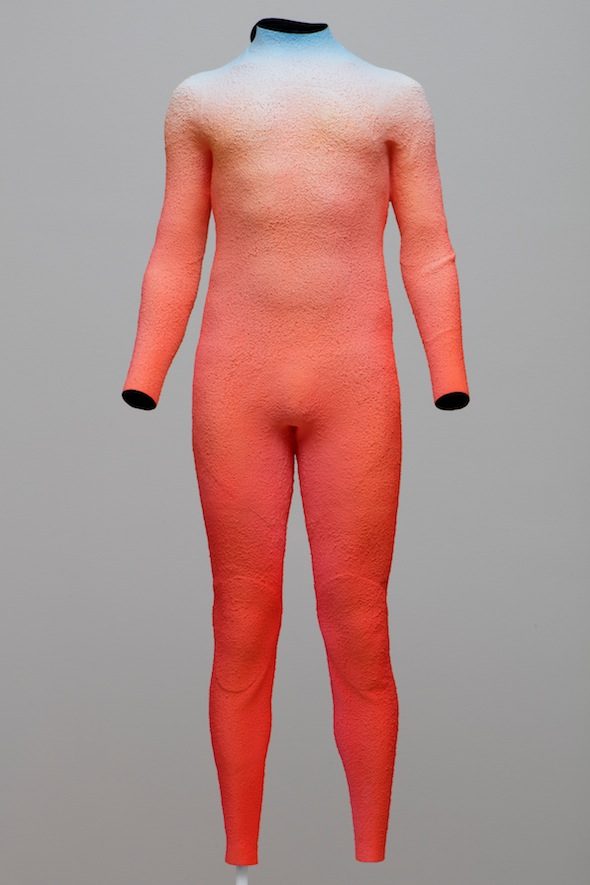 Also demanded by many of the works is relating your own body to the space you occupy in the gallery. Eduardo Basualdo forces viewers to consider the way they move through space by building a giant black aluminum meteorite, nearly wall-to-wall, in the middle of one of the smaller gallery rooms. In the main gallery hall a section titled ‘Beneath the Firmament’ cites biblical cosmology to reference outer space, that enormous mysterious fabric to which we attach meaning to comprehend our existence. The sun is a popular motif here, and the giant scale of Katharina Sieverding’s spluttering molten red sun looms over the viewer. Around the corner visitors are dwarfed again by Andy Holden’s huge starry galaxy wall, ‘Obsession’, that on close inspection is half made from stick-on googly eyes. 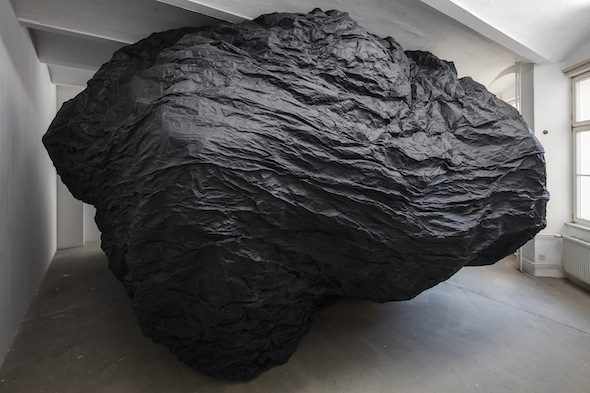 The first floor deals with our relationship to the world around us through the way we navigate or relate to reality. Media, technology, and commodity fetishism are found here as potential surfaces of reality. In place of the tangible investigation of our world through touch, technology becomes an extension of the body. Ying Miao uses iPhones in an installation work as well as an aesthetic influence for her ‘Tech Abstractionism’ series. Lawrence Lek’s ‘Simulation Sculpture’ takes the viewer on a virtual tour of KW in ‘Berlin Mirror (2042 Retrospective)’. A voice-over claims “history is heavy so my art had to be weightless” as the point-of-view computer graphics tour glides unnaturally through the building and the surrounding streets. The works here are not overtly or particularly critical (though Miao’s iPhone6 on a tripod contraption watching over a pile of pillows like a musical baby mobile is a bit unsettling), until you reach collective, Auto Italia’s film work ‘My Skin Is At War With A World Of Data’. 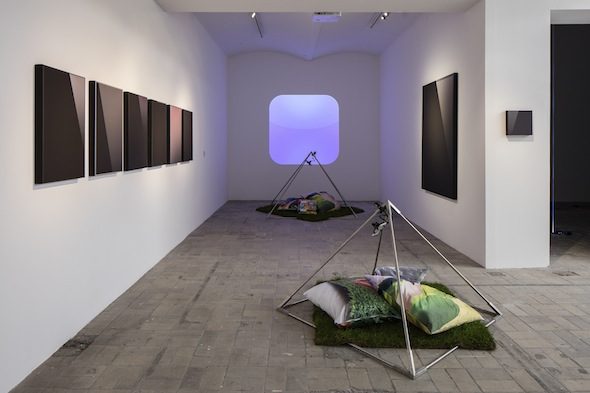 Slow motion closeups in the style of cosmetic ads and stock images are paired with an out-of-sync voice-over – “in the future women will just be DNA, infinitely reproducible. Anxiety is the new self-producing work ethic”… “Industrial strength hormones ensure I am still visibly productive, all day, everyday”…“Welcome to the she-factory”. Image saturation and media driven body fixation are pointed to in this work as a superficial site of meaning. Identity and self-image as a surface is represented in the exhibition both as a mediated product, and as a disguise or a second skin. Georgia Sagri’s work ‘Copypaste’ is a fabric suit printed with realistic pinkish limbs in denim shorts and a singlet, hanging on a coat hook. Mark Leckey’s video loop, ‘Living With The Ecstasy Of Always Burning Through’, shows a pair of eyes shifting behind a two-dimensional photograph of a man in a distinctive polka dot outfit. In an online chatroom you can be anyone you wish to be, and this is where Frances Stark situates her video-text work, also linking in language as an explicit surface of meaning production. 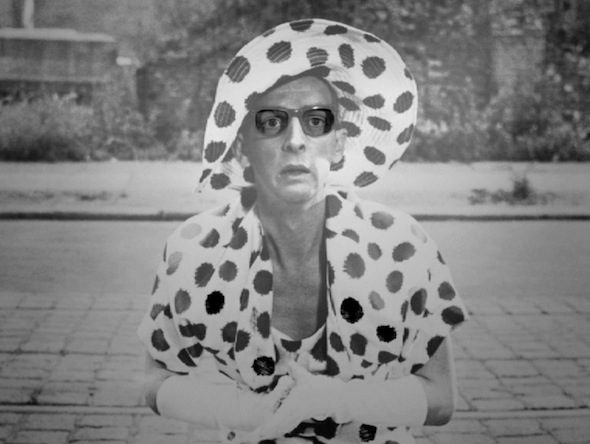 Ultimately, ‘Secret Surfaces’ locates a set of real, virtual, and conceptual spaces where meaning is sought and produced. It emphasizes and blurs the boundaries between these spaces, and all at once entices, comforts, and alienates its visitors. The site of meaning production is a bold and broad theme to take on, and the varied selection of works on show demonstrate how personal and eclectic the answers can be.