Most of us know Daniele Antezza as one half of Dadub, and also as part of the label Stroboscopic Artefacts. Today, he presents himself under the alias Inner8, having founded a new Berlin-based label called Holotone. The project was presented for the first time at Kantine am Berghain last January. The name Holotone refers to the fascination the artist has for the Holographic Universe Principle. The musical approach of Inner8 is deeply intellectual and, by launching his own label, Daniele Antezza has offered his worldview through his music. 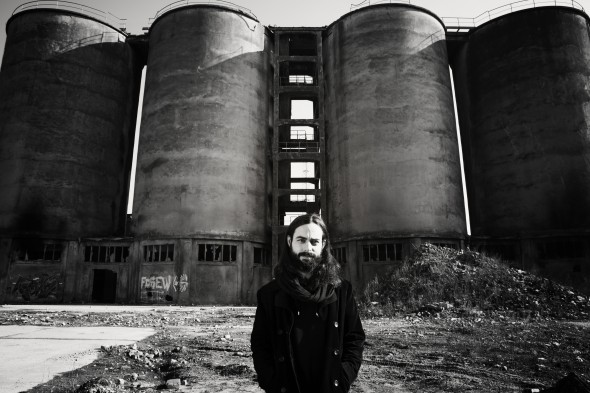 Marc Girardot: How did you become interested in the Holographic Universe Principle? How do you think that music is able to transcribe this idea?

Daniele Antezza: My interest in the Holographic Principle (which roughly assumes that 3D spaces can be mathematically described as 2D projections) came up while I was speaking with a friend, Alexander Stone, who also played at the showcase in Kantine am Berghain. We were talking about science and he asked me: “Did you know that some serious scientists and researchers are trying to prove that we live in a sort of huge form of a hologram, in such a way that we can consider our macroscopic universe as a 4D video display made of subatomic informations?”

Philosophically talking, I find this concept really interesting, because it makes us thinking of our reality as something which exists because we perceive it through our cognitive system, and not as a sort of “objective status quo”.

When I decided to launch the label, I wanted to link its conceptual framework with the philosophical image I have of the Holographic Principle, mainly because in my opinion the sound can be conceived as something that shows us that what we see/hear it’s not always what it really is, which is barely the same thing I imagine when I think about the Hologram where we are supposed to be actually living. I found all of that fascinating! Furthermore the music, as with all the other cultural/artistic fields, can be used as a very useful way to analyse kinds of social structures or political issues, as James Attali suggests in its essay Noise: the Political Economy of Music.

When we experience and observe a piece of music, we can try to abstract patterns or harmonic/disharmonic structures from that composition. For example, repetitive patterned music like techno can show as a serial activity related to our post-industrial society, whereas other kinds of music can describes celestial movements, or dystopic visions and so on. Well, whether the artists are doing that consciously or not, I often like to observe music that way, cause it reveals many aspects of the cultural context where the piece of music has been created, exactly how the Holographic principle intuitions are trying to prove regarding our conception of universe and reality through the experiments made with a special tool called Holometer at Fermilab (USA).

MG: As an introduction to your new project Holotone, what was your intention with the ‘Tetramorph’ EP? How did the collaboration with Koichi Shimizu come up?

DA: The EP emerged naturally. It is very important for me because it’s the first result of my new sound design experiments. This EP is pretty fresh for me in terms of sounds if compared to my debut album, which was mainly a collection of sounds made in the last several years. I am pretty satisfied with my new work, because I think I feel I’ve been able to represent through sounds the aesthetics and the ideas I had in a coherent way. I used the name “Tetramorph” because I wanted to represent through 4 different and well identified categories, the main characteristics of the tracks.

Regarding my collaboration with Koichi, he sent me his album Otolary and I found his approach really interesting. It is fully experimental with modular and programming, but it is also a really musical approach. It is really important for me to have this combination of qualities. He sent me the track very quickly and it was exactly what I was looking for. I had the opportunity to meet him because I did a showcase in Bangkok and Tokyo very recently (he is Japanese and based in Bangkok).

The second EP on Holotone will be produced by him: I would like to release it around July and I’m really looking forward to it.

MG: There are truly some eastern influences–from Africa or the Middle East–in your music. What’s drawing your attention in these sounds?

DA: That’s a really good question, cause I really love those sounds. Some years ago I’ve studied and practiced percussions for a while, focusing my attention on eastern influences. Even if I don’t consider myself a percussionist, that experience was very precious, because as electronic musician I find very important to be knowledgeable about those sounds, and in general about playing musical instruments: It detaches me from the idea of strictly sequenced sounds in electronic music, and it makes me able to be more creatively free especially in my grooves creation.

MG: It’s obvious that you are trying to push boundaries through your approach. As an innovator, what is your relationship with the past? Do you believe that nostalgia is an enemy of innovation?

Art and music are a kind of laboratory where the mind and the soul are free to experiment creatively, without using the tools that we use when we make a standardized work, or in our everyday lives. If you love to experiment finding your own touch and not just to copy, then you create something meaningful. This is where I want to trigger the curiosity of others. I don’t like to think about the music I do in a functionalist way, cause I want to make my sounds able to create an experience for the listener, and even if some people can get interested in that just by reading about the concept behind the music, and ask themselves: “What the fuck is this guy trying to say with his music?”, I like that. [laughs]

All this means that I don’t focus that much on what my music can be today, or what it was years ago or what it will be. I like to collocate music and creativity in a timeless dimension, where the concepts of innovation and nostalgia are not so strongly meaningful.