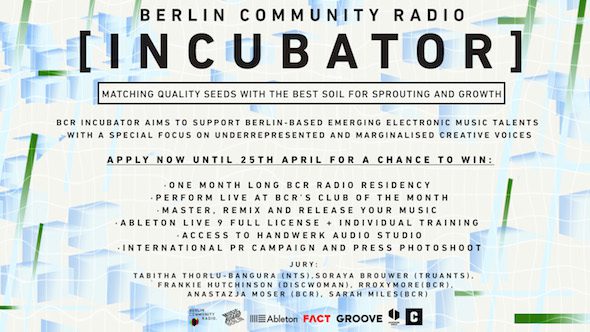 BCR is currently accepting applications for its Incubator project—a mentorship and residency program aimed at artists who are underrepresented in the music industry. Applicants must be Berlin-based and emerging electronic music talents with at least one completed track (self-released tracks on Youtube, Soundcloud, Bandcamp, or other hosting platform permitted).

As a project focused on underrepresentation in the industry, BCR Incubator is looking for applications from artists who are WOC, QTPOC, women or female-identifying, immigrants, and from other marginalized communities.

Applications will be deliberated by a jury—composed of Tabitha Thorlu­Bangura (NTS), Frankie Hutchinson (Discwoman), Soraya Brouwer (Truants), rRoxymore (BCR), Anastazja Moser (BCR) and Sarah Miles (BCR)—that will then choose four acts for participation in the project.

The successful candidates will be awarded a one month residency at BCR radio, along with mentorship by a BCR affiliated producer of the artist’s choosing. During this time, artists will have access to Handwerk Audio Studio (sound engineer assistance provided), as well as Ableton Live 9 full license and individual specialist training. BCR will also launch a full promotional campaign across its social media channels, and an international PR and press campaign, including press photoshoot. Artists will have the opportunity to master, remix and release music, and will perform live at BCR’s Club of the Month. The residencies will run between May and August 2016.

​To apply for BCR Incubator 2016, fill out the application form on the BCR website: www.berlincommunityradio.com