Berlin Art Link has made its selections for the Top Ten exhibitions to see during Gallery Weekend 2016, running from April 29th to May 1st. Shifting atmospheric optics and post-internet image-making promise a dynamic lineup for this year. 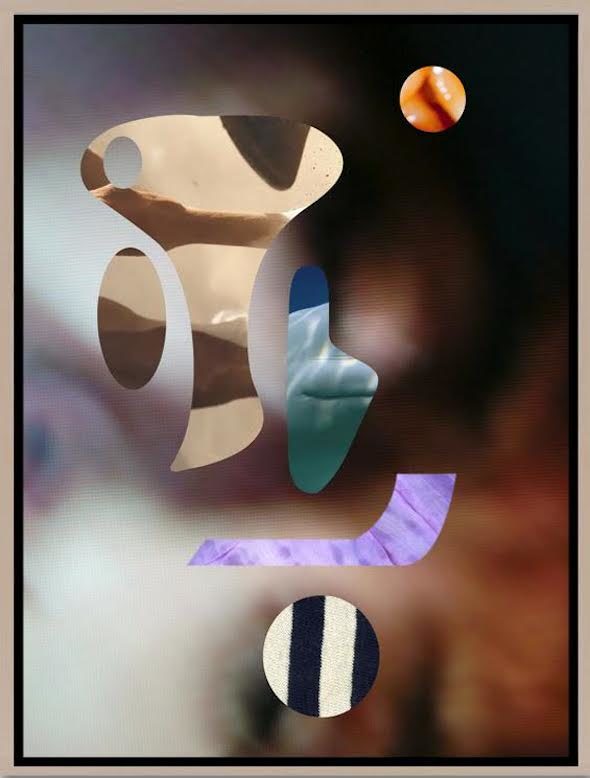 Neumeister Bar-Am presents their second solo exhibition featuring new work by American artist Kate Steciw. In contrast to her previous practice of manipulating and abstracting stock images through photoshop, Steciw’s most recent works are focused on compositions crafted by hand post-print. The exhibition Things of Shapes features several hanging sculptures and large rectangular wall works composed of multiple cut-outs taken from a single printed image. The artist’s interest in image manipulation and alteration has driven her to create new narratives from previously static and recognisable forms.

Renowned Argentinian artist Tomás Saraceno draws on the diverse themes of space exploration, science fiction and the geometric patterns found in biological science as inspiration for his installation works. Trained as an architect, Saraceno creates immersive large scale installations that blur the line between art and architecture to great effect. Saraceno’s latest exhibition, Aerocene, features a series of lightweight air-fuelled sculptures that are capable of lifting their inhabitants using cosmic energy sources. Powered without fossil fuels and entirely emission-free, the sculptures are instead made buoyant through the heat of the sun and the infrared radiation of the earth’s surface. The broader application of such creative technologies is particularly significant in the current climate of turbulent geopolitical relations and offers a powerful message of salvation through creative thinking.

Buchmann Galerie presents a solo exhibition of new ceramic works by German-Iranian artist Bettina Pousttchi. The exhibition features a series of striking ceramic wall friezes that combine the visual language and aesthetic of European architecture with those of the Middle East, poignantly echoing Pousttchi’s own cross-cultural experiences and transnational perspectives. In the Buchmann Box, the gallery presents a retrospective exhibition of early works by French conceptual artist Daniel Buren. Entitled Peintures 1966-1969, the exhibition features key works from the most significant period of the artist’s oeuvre.

Peles Empire is a collaborative effort between German-Romanian duo Katharina Stöver and Barbara Wolff. Returning for their second solo exhibition at Wentrup, Peles Empire have created a large-scale site-specific installation that focuses on the relationship between the original and the copy. Their installation, 1 Eye 2 Eyes, completely reconfigures the gallery space by layering repetitious motifs and objects generated from previous exhibitions. This repetition is often accompanied, however, by a shift in medium and material, so that each configuration of the objects and motifs is different from the last. In this way, Peles Empire presents the copied copy as the new original and poses important questions surrounding authenticity and originality in the art world.

Known for her large-scale, densely layered architectural and geographical renderings that generate intimate new perspectives, American artist Julie Mehretu‘s new work is a collaborative project with Niels Borch Jensen Gallery & Editions.  Epigraph, Damascusis a monumentally scaled work composed of simultaneous multi-perspectival views of architectural details from buildings in Damascus, Syria. Locatable elements are both enmeshed in and extricated from a landscape of overlaid images and viewpoints, in which the narrative – and the space – is not a singular one: but one that can be traversed, occupied, and inhabited outside the specificity of time and place. 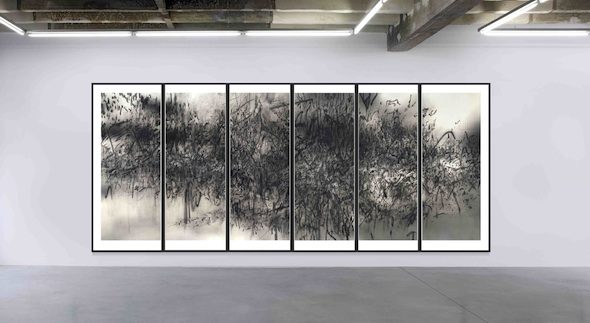 Engaging the processes and aesthetics of the culture of consumption and performance of self that pervade the internet, Petra Cortright employs an amateur, home-video style in the construction of images for public dissemination. Often emphasizing techniques of production, her works experiment with tools and modes of presentation that fabricate a public image seemingly embedded in the domain of the private self – as captured, for instance, via webcam. Concretizing the tensions between reality and artificiality that permeate digital media, her performative installations, digital paintings and animations reference ubiquitous images of digital culture while illuminating the individualistic approach that informs their construction. This will be the second solo exhibition of her work at Société.

Cuban-born artist Diango Hernández uses his practice to explore issues connected to cross-cultural concepts of identity. The title of his current exhibition, Marinas, captures the dual experience of the harbour as a place of both exciting departure into the unknown and happy return to one’s homeland after travels abroad. Using Cuba as a starting point for his artistic explorations, Hernández creates immersive works that place the viewer in the heart of the Caribbean and yet only hint at the many lives and stories that have unfolded there.

Videoart at Midnight is a project developed by Olaf Stüber and Ivo Wessel to facilitate discourse around the medium through screenings of work by Berlin’s established and emerging film/video artists. In cooperation with Videoart at Midnight, Berlinische Galerie will present full-day screenings during Gallery Weekend. Set within a one hour loop, a diverse assortment of works by seven artists will comprise the program: Sven Johne, Martin Skauen, Mathilde ter Heijne, Erik Schmidt, Marcel Odenbach, Antje Majewski, and Armin Linke. The works are selections from the Berlinische Galerie’s collection—its Videoart at Midnight Edition — which it has been acquiring since 2012.

Aleksandra Domanović is a Berlin-based artist from former Yugoslavia. Her multimedia installations excavate a feminist telling of the history of technological and scientific developments. Interested in modes of transmitting images and information on the internet, Domanović considers cyber territory phenomena—such as digital property and web domains—as they intersect with the geographical location of Eastern Europe and the terrain of the human form. Through science fiction elements, mechanisms of transportation and communication, and the prosthetic hand, Domanović’s work melds technology and the (female) body to deconstruct the ways information and images are controlled, communicated and received. Tanya Leighton will be presenting Domanović’s work in the solo exhibition, Bulls without Horns.

Carsten Nicolai‘s current exhibition, reflektor distortion at Galerie Eigen + Art, features a site-specific installation of three components, which manifest the mirroring, distortion and disturbance produced by reflective surfaces. Nicolai’s work is often concerned with random events and disturbances, and their processes of exchange. In his installation at Galerie Eigen + Art, this is articulated through the vibrations and interferences that manipulate the surface of water when low-frequency sounds are emitted from a loudspeaker. In conjunction with the current exhibition, Galerie Eigen + Art will also present Nicolai’s comprehensive catalogue, parallel lines cross at infinity, at a launch event during Gallery Weekend.