Dutch photographer Erwin Olaf is known for his elaborately staged, highly charged and emotive portraits. For his collaborative project with the Ruinart champagne house, Olaf focused his camera lens on the subtle intricacies of wall surfaces in the cellars used for storing champagne. In these layered images, there is a harmony between the natural formations and textures of the walls and manmade markings that coexist on their surfaces. The close-cropped, abstract nature of the photographs and their bridging of time from the prehistoric to the contemporary suggest an ongoing process of development and change. No longer conveying a mood or feeling through the human subject, a feeling for the materiality of the surface – an alternative sense of closeness – is communicated. As opposed to fixing a moment in time, the process of visualization is captured in the final images, as though still in process: not a concrete, firm realization, but rather a pause in its continuous maturation. 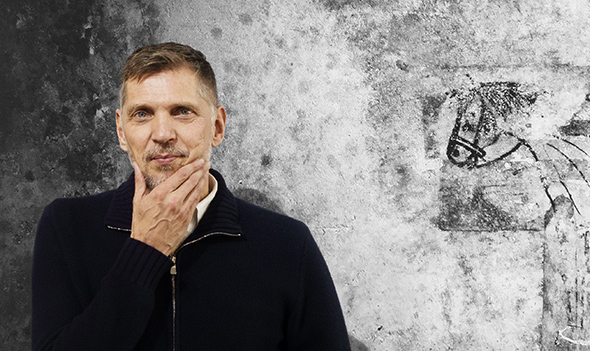 Erwin Olaf at me collectors room // Photo by Anna Russ

Julianne Cordray: In the Ruinart series, there is something bodily in the way the textures of the cellar walls – with their cracks, wounds, markings, and orifices – materialize in the photographs. Most of your other work presents human subjects in portraits or detailed settings. How did this influence an approach to the walls of the cellars as both setting and living subject?

Erwin Olaf: The precision, that was similar. I made a staged photograph once, which showed the first tear, the first moment of grieving. But that series was the very first time that every detail, every millimeter for me was incredibly important. The older I get, the more interesting I think that things are: how come when the shoulder’s a little bit lower or higher, the viewer interprets it completely differently? So I also integrated this precision into this series. When I crop in a certain way, you see the combination of human influences and nature. Slowly, I started to discover, if I crop like this, then it starts to look like a painting. That is why I took five trips: because sometimes I cropped wrongly and sometimes I cropped spot-on. The precision is also the light, only one lamp. Structurally, if you use one lamp, how much shadow will you show? Or how much shadow do I want to show in the paint? Because that makes the texture more tactile. For me, that was incredibly interesting, because it was not about whether somebody’s hair is okay, or if the set is well designed. The precision was incredibly important. And I wanted to present it without glass because I liked the vulnerability of the material, as though it was a painting. 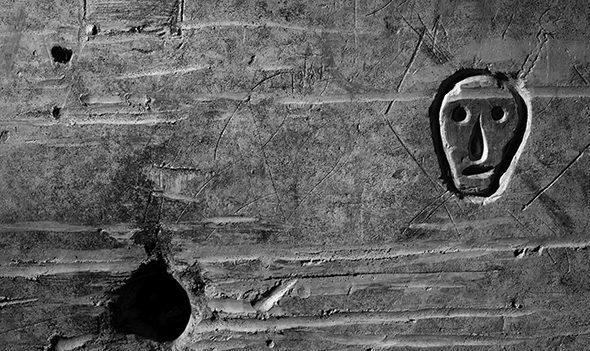 JC: You have cited time, serenity, and darkness as the conditions conducive to art’s realization, and particularly photography. Time and darkness are embedded in the photographic process. Was the notion of serenity something that emerged during the process, or did it inform your approach to the project?

EO: The serenity. That was what I was looking for: the quietness, very concentrated, very detailed, not surrounded by a lot of opinion. You only have your own opinion or that of your assistant: a dialogue. And that was what I was looking for up front, but I didn’t know how to access that. But then later (during the five sessions that we were concentrated only on the details) there was a sense of relief: we found it and then slowly I started to get used to it, being there on my own. It’s always quiet there, and it’s always dark. There’s only orange light, which is the translation into black and white, because all the colors are gone. Everything is dark, or grey, or orange. For me it was kind of Zen, and I am quite restless in normal life. 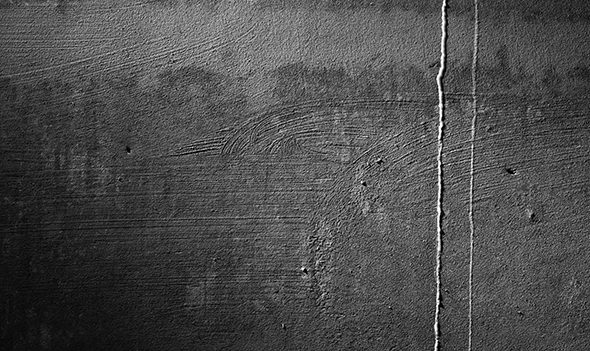 JC: What exchange of influence can be traced between your prior working methods and that employed in the production of this series?

EO: My original idea, which was approved by Ruinart, included a built set and all those things; twenty people behind the camera. And for me it felt more and more, over the last few years, like a backpack full of stones, getting limited in my expression. So I was looking for a breakthrough in my own thoughts, in my own way of working, but I couldn’t find the key to the door. But that happened in this project, because as you can see it’s quite simple, and going back to the essence of my photography when I started out in 1978: strong black and white, it’s not journalistic in the classic journalistic sense, but it is a registration of reality. This is the reality as it is downstairs in the cellars. It’s also about cropping, which is one of the major things in photography. You can see this as well in this selection – that the cropping tells the story. 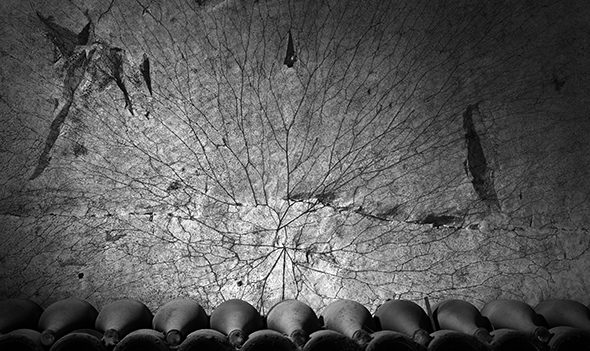 JC: And how might this process of visualization continue to evolve and emerge?

EO: I don’t know what will be the effect on the future of my work, but it will definitely have an effect. Parallel to this series, I created some series of nudes. You cannot compare: it’s in color, it’s a human body, classical nudes. But the one thing that is similar is the minimal light, the few people behind the camera, the simplicity of the pictures. You have one body that’s making a composition or is creating an emotion. That is a straight line between this work and that one. I hope to continue a little bit. I’m going back into my darkroom, and this Autumn I hope to start to print myself again, because that’s more the Zen part of photography.