From the very first minute of Death Asshole Rave Video, Jeremy Wade confronts and affronts audiences with the concept of death. As you walk into the HAU3 theater, whitened to look like a whitewashed tomb—or perhaps heaven—Wade is already there, lying on the floor in the kind of suit his father was buried in. From then on, like a balloon cut from a frail string, death, as a concept, is let loose into the atmosphere, free to contaminate other parts of our existence. Theater, love, sense, and security all face demise in Wade’s eyes.

This is not the timid, reverent approach to death that you might know from funerals. There are no pleasant platitudes about the shortness of life. No forced serenity. Realistically, anger is the current on which most of the production is carried. Spurred on by Mika Risiko’s vengeful techno score, you quickly find yourself on a raging rapid of scorn, unsure of exactly when the inevitable waterfall will drop you. 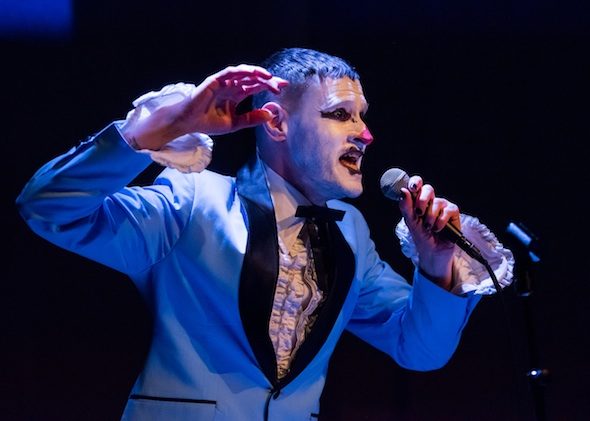 The piece whipsaws between achingly intimate encounters with death and broad societal pronouncements about its pervasiveness. In one moment, Wade explores his very personal anxiety about growing old alone—because no one is there to care for him, not even his meager artist’s retirement fund—and in another he zooms out to lament the System with Churchillian verbosity.

“Can whoever is playing us get to level two?” is one of many questions Wade asks to chide us into circumspection. With each question he points the barrel of his proverbial gun at another co-conspirator in our downfall. The education system: well, it has fed us misinformation. Bang. Free love: it has left us feeling more empty and alone than a chastity belt. Bang. Capitalism: it has turned us all into strangers, alienating us from ourselves. Bang bang bang. As Wade fires his hail-Mary shots, he assures us that the assailants will just keep coming, angrier than before. 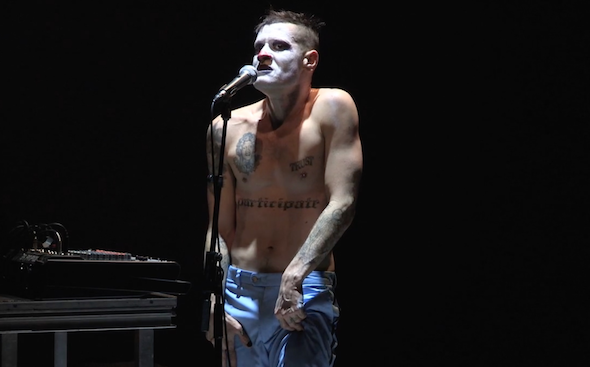 Wade uses queer and gothic imagery as vehicles for his protestations. Eight inch platform shoes, diva fur coats and skin-tight leather all unite to banish heteronormativity from the stage. Explicit references to human excrement and anal sex abound. At first, Wade appears to relish the sheer act of mentioning them, like a child discovering a taboo, but then it becomes clear that he is using them as a sobering device to remind us of the primacy of our bodies. After all, when all else fails all we have is our bodies. They are the last things we have to sell. Indeed, they are the last to die.

The highlight is definitely a very poetic scene in which Wade invites audience members to contemplate their own deaths. This is where Ezra Green’s script really gets a chance to do some flip-flops. It has both the beauty of a eulogy and the acidity of a break-up speech.

There is little hope or solace in this production. It won’t make you feel good, death never does, but it might just make you think.