The politics of public space weave into art space in the curatorial collaboration of Xandra Popescu and Larisa Crunțeanu at District Berlin. Encompassing various video-based projects, Public Speaking activates generic modes of popular image-production and storytelling to transmit perspectives from outside established authority positions—invading such spaces, underscoring the inherent tenuousness of their constitution. 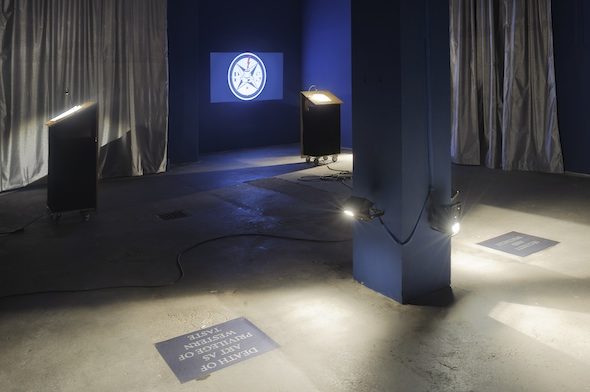 Video projections command and direct the space in a performative display, shaped by cyclical motion: at the end of each video, the projection is repositioned to another wall, where the next begins. In the process, viewers’ relationships to space are altered, and positions remain unsettled. A material manifestation of this theatricality—and the structuring elements of power—is introduced as ‘prop’ in the form of a wooden podium, which functions independently from and in tandem with the video works. Both components navigate the viewer’s path, beckoning toward the empty podium to fill its vacancy, or signaling the next vantage point. Consequently, spectators are enlisted in the performance, choreographed to physicalize the social relationships of authority. Though it remains unoccupied, the podium—as representation of authoritative presence—dictates viewers’ movements through space, as they follow expectantly, awaiting direction for where to look and when to shift to another darkened corner of the room. 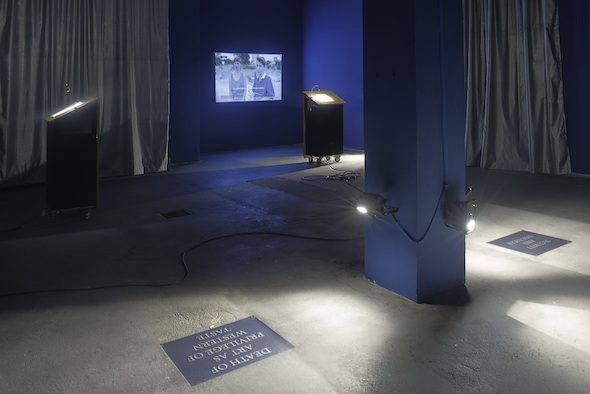 Illuminating the emptiness behind positions of power and influence that operate through forms of generalized spectacle, ‘The Presidential Candidate 2083’ and ‘The Candidates Invite You in Tent’—recorded performances executed by the collective The Presidential Candidacy—co-opt and reconfigure generic campaign tactics and slogans to construct a ubiquitous ‘candidate’ that embodies all such positions and yet fills none. Through invasion of public spaces and commandeering of events, their performances also reveal the closed nature and exclusivity of supposed publics.

Another invisible presence propels the spectacle surrounding the site of Romania’s former APACA textile factory. In Femina Subtetrix, Crunțeanu and Sonja Hornung fabricate and publicize a ghost story that imagines an alternate perspective of the factory’s mythologized women weavers. The women’s work at the factory was tied inextricably to their bodies, which were shrouded in rumors of sexual promiscuity. In this project, these bodies without presence resurface in the ghost of Ana—a former worker whose omnipresence is palpable. 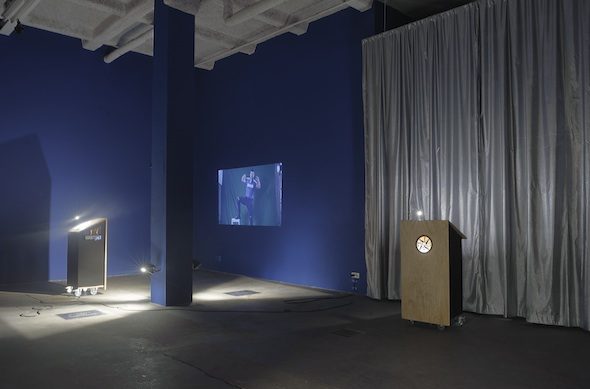 Xandra Popescu and Adrian Kunppertz, You Are Safe With Me, 2015 // Photo by Anton Roland Laub

Work and workers’ bodies are also entwined in that of the male bodyguard, photographed and documented in Popescu and Adrian Knuppertz‘s ‘You Are Safe with Me’. Bodyguards—as expressions of both occupation and body type—pose for the camera, while captured in the self-conscious process of performing a hyper-masculine self for public consumption. Assuming standardized poses (pervasive in images of women), security guards awkwardly navigate the site of image construction through sustained dialogue with the photographer—demonstrating the insecure nature of presupposed identities and social relations.

The exhibition’s theoretical scope manifests visually in Veda Popovici‘s ‘Revolutionary Gear: The History of Art Retold Through the Black Square’, in which Kazimir Malevich’s iconic ‘Black Square’ is reformulated as conventional black textile. Re-appropriating it from an art historical context that defines it in terms that it was formed against, the video stages a restructuring of its history as a tool for cultivating radical transformation. Translated into flexible textile, the rigidity of its geometry is opened to new formations and communicative potentials. The ‘Black Square’ simultaneously becomes more abstract and more tangible. No longer a passive surface image, it is an activated object that can be worn, manipulated, and engaged in direct relationship to the body and its motions: stimulating a tactile mode of perception that facilitates alternative subjectivities. Transformation is initiated in the totality and nothingness of Malevich’s square, mobilized here by the female body. 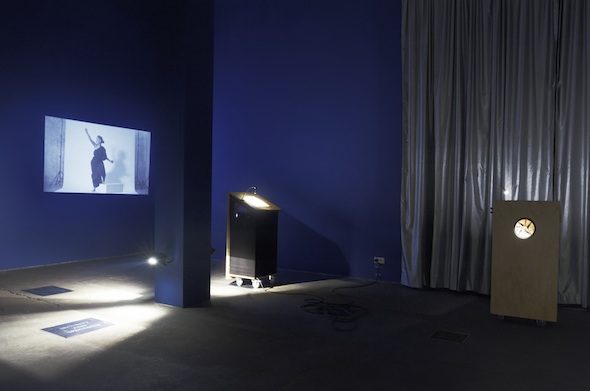