Oscillating between subtle and pronounced, interventions within the landscape of Botanischer Volkspark Blankenfelde-Pankow mine underlying structures of our built environs to trace the apparent seamlessness of constructions that evade perception. A group sculpture garden exhibition, The Analogy Between Bulbs and Buds presents multidisciplinary approaches to sculptural installation, which inhabit—or intrude upon—the park’s interior and exterior spaces. The varied media and modes of interacting with plants and surrounding structures produce a dynamic interplay of architecture and sculpture, nature and simulacra, through which permeability is engendered and classifications are in flux. 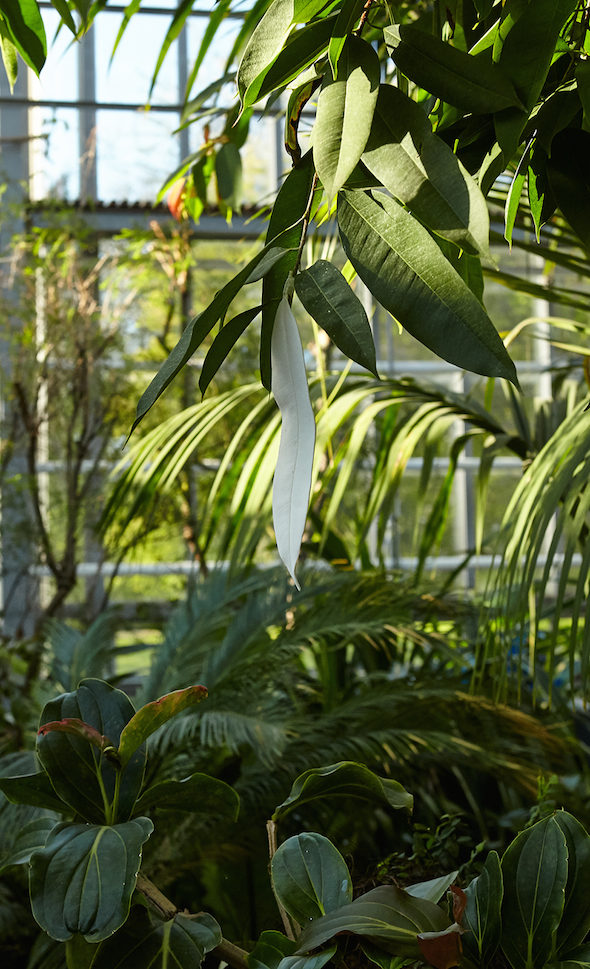 Curated by Rachel de Joode, Zoë Claire Miller and Michaela Richter, the exhibition features works by twelve international artists that navigate the park’s infrastructures—both naturally formed and invisibly present. Through processes that add to, subtract from, and transform the landscape, their work indicates the constructedness of such ‘natural’ environments, contouring less clearly defined notions of functionality and cohesiveness within these settings.

Modes of display and their manipulations—the preconceptions they produce—are illuminated by delicate, understated outgrowths that hover above, cling to and emerge within the plant-life and architectural framings of the park’s greenhouse. Ulrike Mohr‘s ‘drawing in space’—in which suspended, linear fragments of manufactured wooden objects in charcoal lightly shift below the house’s glass roof—produces space as material for a rendering that is unfixed though remains tethered to its preexisting structure: akin to, though distanced from the cactuses planted below. A less detached, autonomous presence lingers in the form of plant leaves fabricated in porcelain by Zoë Claire Miller, which lie among and entwined living plants, imitating their structures while announcing the impossibility of their functional and aesthetic assimilation through hard materiality and incongruous white surfaces. This out-of-sync experience is further manifested by a disembodied robotic voice-over that instructs no one in particular on plant-care procedures. 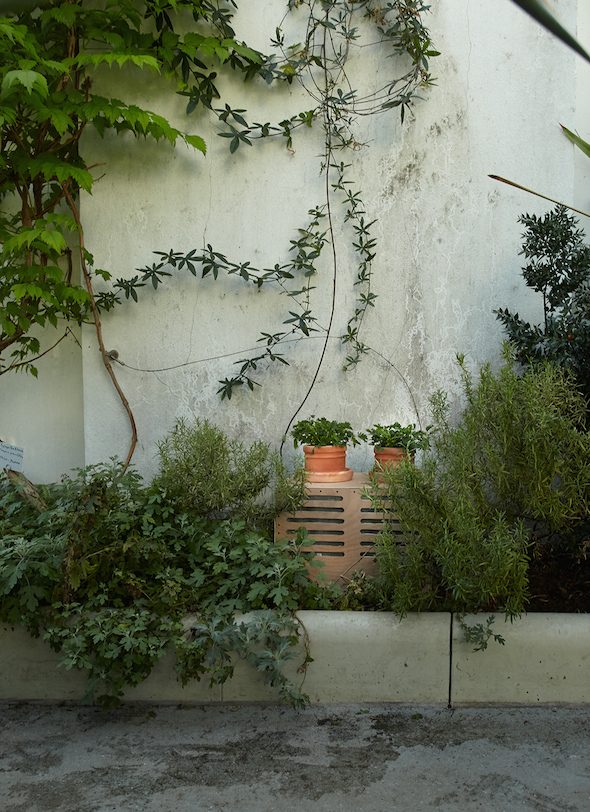 A more subtle imposition, and perhaps even more imposing for it, Kasia Fudakowski‘s two small potted Mimosa pudica almost belong, are almost in harmony with the surroundings, but not quite. Characterized as a ‘creeping’ herb, the Mimosa pudica plants slyly creep into the garden with an ease afforded by their natural-seeming presence, while the ceramic pots they are anchored to make this same appearance uncanny. The process of their intervention is made visible. Disruption occurs on another level as well: in the tactile interaction provoked by the plant’s responsiveness to touch, through which it folds into itself, simultaneously warding off and tempting further action. The necessity to know—to grasp—through tactile sensations corresponds to a similar need to clearly identify and categorize: parallel tendencies that are eluded by these plants and their placement within the greenhouse. 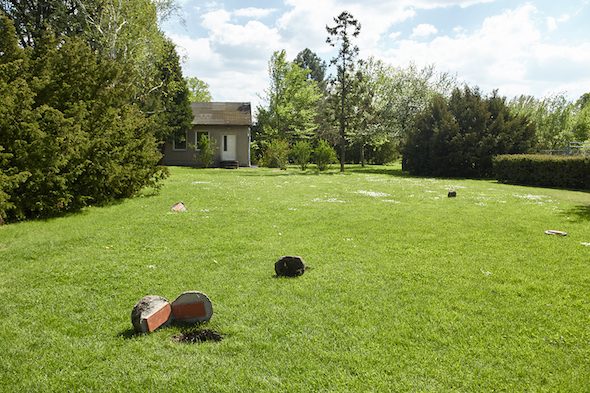 The exterior garden’s inner workings are unearthed by Rike Horb, through concrete forms that were molded by and born from the land. Digging up irregular patches of lawn, Horb produced individualized forms that lack the structural precision and replicable geometry of standard concrete formwork units employed in construction projects. The resulting concrete elements are more organic in appearance, though they remain external to the sections of earth they have displaced, leaving behind a void shaped by their distinctive imprints.

A pair of freestanding adjacent sculptures are engaged in dialogue as monuments to the worker and the everyday, placed within an art historical context: Tilman Hornig‘s totemic porcelain toilets and Alona Rodeh‘s assemblage to the land worker. Both have a bodily presence, though composed of abstractions—no longer functional objects—set apart from the landscape they inhabit. Hornig’s work references Marcel Duchamp’s recontextualized urinal and its persistent questioning of the nature of art—reassembled here to evoke a fragment of bone. Rodeh’s recalls the geometric simplicity and monumentality of modernist works such as Kazimir Malevich’s ‘Woman with a Rake’. Placed within the garden, standing tall though minimal in form—the horizontal rake at the top performing as figural arms and the rake itself in their grasp—the sculpture fuses body, art and nature: manifesting an imperceptible presence through the visualization of absence.