Anna Charaktinou is a Greek-born artist who lives and works in Berlin. Her whimsical collages of cut paper and intricate hand-drawn illustrations are rich psychological self-portraits that express an enchanting inner world of fantastical creatures and dreamlike states. Heavy with symbolism and mythological references, Charaktinou’s two dimensional paper sculptures are filled with the natural imagery of trees, leaves, shells, flowers, and real and imagined creatures of every kind. 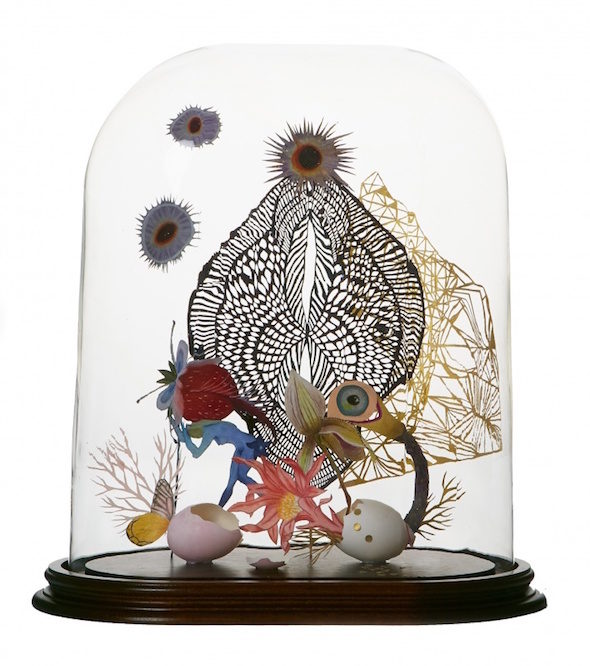 The inspiration behind Charaktinou’s works can largely be traced to the illustrated books of fairytales that she read as a child. Among her favourite stories was Lewis Carroll’s ‘Alice in Wonderland’, which captivated and enthralled her with its bizarre surrealist tales and fantastical creatures. Charaktinou was also greatly affected by her mother’s collection of prints by late medieval artist Hieronymus Bosch, whose darkly surrealist imagery and fantastical creatures continue to have a significant presence in her work. While many have long since discarded this childlike fascination with the magic of imagination, Charaktinou uses fantasy to create highly surrealist works wrought with complex symbolism and emotional intensity. 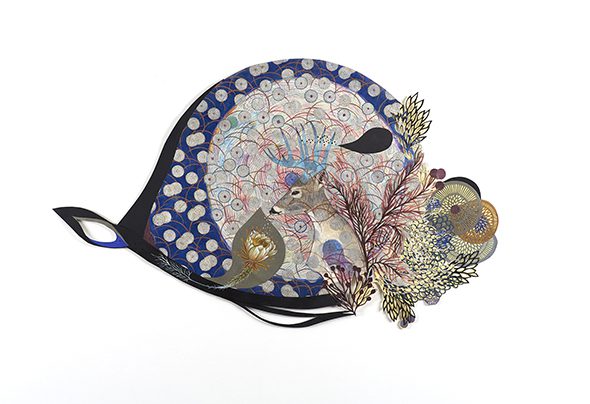 In the creation and development of her images, Charaktinou finds that her processes can be divided into two distinctive starting points: material-based or concept-based. When the process is material-based, Charaktinou is moved to create a new piece of work owing to a sudden obsession with a pleasing form or shape. She begins by cutting the paper into the desired shape or pattern and then generates a story based on the resulting form. By contrast, when the process is concept-based, Charaktinou is moved by an instinctive need to tell a particular story or express a particular theme. As the illustrations materialise on the page, the cut paper form that the images will come to rest on becomes the last element to be introduced and works to tie the illustrations together as a coherent piece. 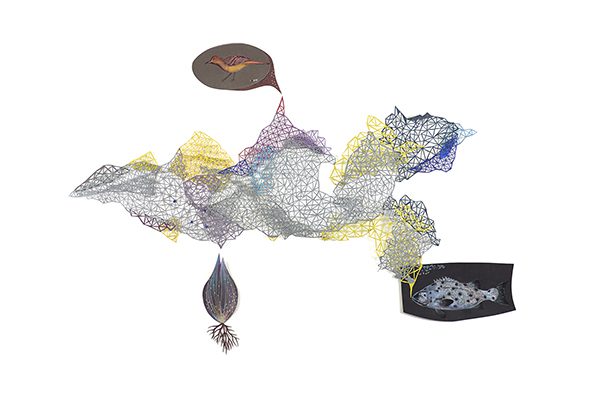 Over the course of her practice, Charaktinou’s use of imagery and symbols has become more refined and resolved, particularly in terms of the solidification of her own representation in her work. The human-animal hybrids featured in Charaktinou’s work are representative of the two natures that we all contain: the spiritual human side and the instinctive animal side. Initially, Charaktinou presented herself as many different animal-headed women, constantly changing from one animal to the next depending on the mood of the piece and the themes she intended to express. Since then, Charaktinou has resolutely settled on one talismanic representation of herself: a deer-headed woman. This reoccurring figure symbolises the artist’s soul and the very essence of her being. The deer resonates with Charaktinou owing to her grandmother, who used to call her my little deer as an affectionate nickname. 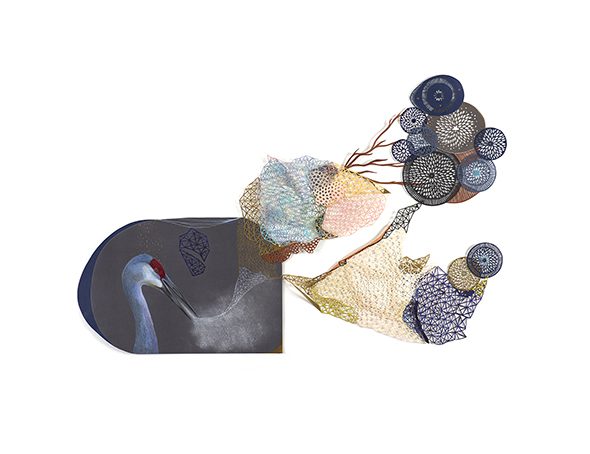 More recently, Charaktinou has crafted a series of paper works mixed with seashells that have been encased in glass bell jars. The works explore the notion that all living creatures are interconnected and that every element in the internal and external world stems from the same source. “Nature contains a part of us and we contain a part of nature.”, Charaktinou says. “There is an unseen connection between us all.” The fragile paper dioramas are presented as tangible pieces of Charaktinou’s imagination, which have been secured under glass for safekeeping. It is almost as though the works themselves must be contained for fear that they will disappear in a puff of smoke or be cast away by a harsh wind. The material delicacy and fragility of Charaktinou’s works make their presence in the physical world all the more magical given the intangibility of their dreamlike origins.