“Worldmaking as we know it always starts from worlds already on hand; the making is a remaking.” – Nelson Goodman

Alexandra Hopf’s new solo show ‘The Night’ takes place in a rather unusual exhibition space: Home, a residential flat located in Schöneberg. The exhibition marks the first episode of the home project, curated by Annabelle von Girsewald, in the context of the residency ABA Air Berlin Alexanderplatz. Three works are displayed in the flat’s corridor and living room and refer to the œuvre of sculptor and painter Alberto Giacometti. 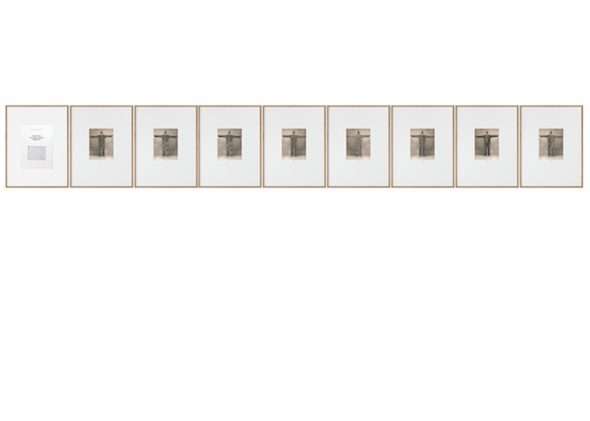 The first work ‘Space Time Suit for Giacometti’, exhibited in the hallway, consists of a replica of a text by Giacometti and a series of eight black and white photographs featuring him, arms wide open in a minimal tailored overall. Pursuing her exploration of art history and its forgotten stories, Hopf has replaced Giacometti’s original outfit by reconstructing it using her own paintings as fabric. The original overall, called ‘Tuta’, was designed by Italian Futurist Thayaht as a functional item accessible to all, yet it became a fad for the Florentine bourgeoisie. Through the alignment and the symmetrical reiteration, Giacometti’s figures end up forming a farandole. Even though the outfit cuts are similar and contribute to the obsessiveness of the repetition, their motifs differ from one image to another. Once reproduced in sepia, they are reduced to thin white lines from which a sort of cosmic composition emerges, calling to mind a spider’s web.

The reproduction of Giacometti’s story ‘The Dream, the Sphinx, and the Death of T.’ hangs further down the hallway and introduces the photographs. This text, written in 1946, was originally published in the journal Labyrinthe. In the first part, Giacometti steers the reader into his own state of panic by describing a frightening dream sequence in which a spider dangles on top of his laying head. He wakes up, realizing another, different spider is lurking around. The full original text interweaves imaginary scenes and recollections in a surrealistic way. It travels back and forth in time and space and blurs dream with reality. In her version of Giacometti’s dream narrative, the artist has modified the ending in order to create a loop effect. The anecdote ends and restarts in the moment Giacometti believes he is waking up, suggesting a perpetual return to the dream and transforming this garish experience in a maddening vicious circle. Its atmosphere echoes the psychedelic motifs of the overalls.

Further on, the neon piece ‘Sphinx’ is hung atop the living room door. The eponymous red neon inscription is framed above and beneath by two white arrows indicating opposite directions. In this work, Hopf recreated the original neon sign of The Sphinx, a storied brothel in Paris in the ’30s and ’40s, adding an antithetical opposing lower arrow. Known for its exotic decor, the place used to gather many celebrities of the Parisian intellectual and artistic scene. Giacometti was present the last night before the closing on October 6th, 1946, which led him to write ‘The Dream, the Sphinx, and the Death of T.’. 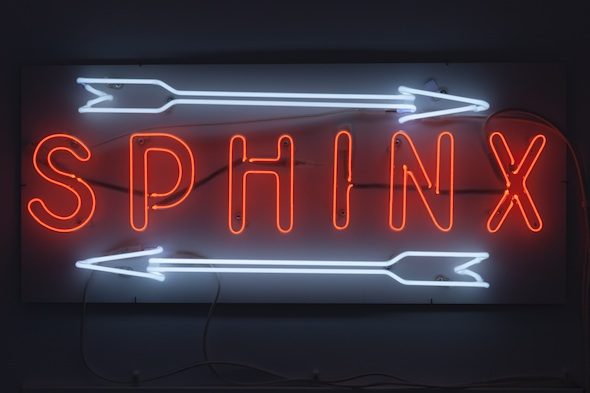 On the wall opposite the neon piece hangs ‘The Night’, the piece after which the exhibition is titled. It consists of an unfolded poster depicting a replica of the pedestal that was supposed to present Giacometti’s eponymous sculpture ‘The Night’ (1947). Instead of the sculpture, a halo of light underlines the absence of the missing work. The poster stands as an omen for a fictional future exhibition, while alluding to the past by means of a spectral appearance.

In this new body of work, like in her precedent series, Alexandra Hopf investigates the œuvre of a key male figure of art history. Through cleverly orchestrated operations, the Berlin artist bridges gaps between historical sources and productions, and the present of her own practice. The perfect expression of this self-referential back-and-forth is embodied by the two arrows that enclose her piece ‘Sphinx’. Oriented respectively towards a possible future and the past, the symbols bring to mind the stylized representation of a Janus reduced to its essence. Moreover, the artist’s care and commitment in the reconstruction process reinforce this temporal duality while blurring its clues and boundaries. The intermeshing of references as well as the correspondence of recurring elements add to this confusion in space and time and by doing so resonate the atmosphere of Giacometti’s dream. The works recover a fictional dimension that plays, like his text, on the uncertainties of memory and imagination, which both produce images removed from the real. 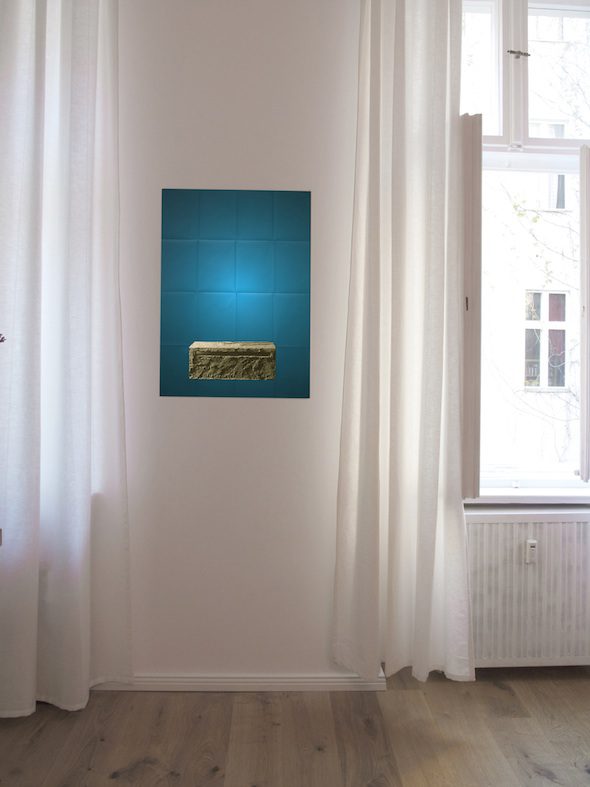 Beyond its interest for individual memory and psychoanalysis, Alexandra Hopf’s work questions the construction of art history. By revisiting the œuvre of renowned artists of the Surrealist, Constructivist or Minimalist avant-gardes, it underlines the prevalence of male figures in its narrative and investigates the creation of myths, as well as the discourses that tend to define the identity of an artist. Basing her work upon a careful erudite research, the artist tracks down less know historical facts and objects like golden nuggets. She displays traces and relics of predecessors before making them vanish again at will. In her practice, the meticulous exploration of stories and history diverts to a loss of bearings, and thus offers the beholder a baffling experience within which the works never completely depart from their enigmatic aspect.