The geometrical shapes and subdued colours of Katja Strunz’s works are aesthetically consonant with her high-ceilinged, brightly lit studio in Kreuzberg, as if they were presented in a deftly curated solo exhibition. The space gives her large-scale paper works and sculptures room to breathe, with areas for leisure and research dividing the open concept workshop. 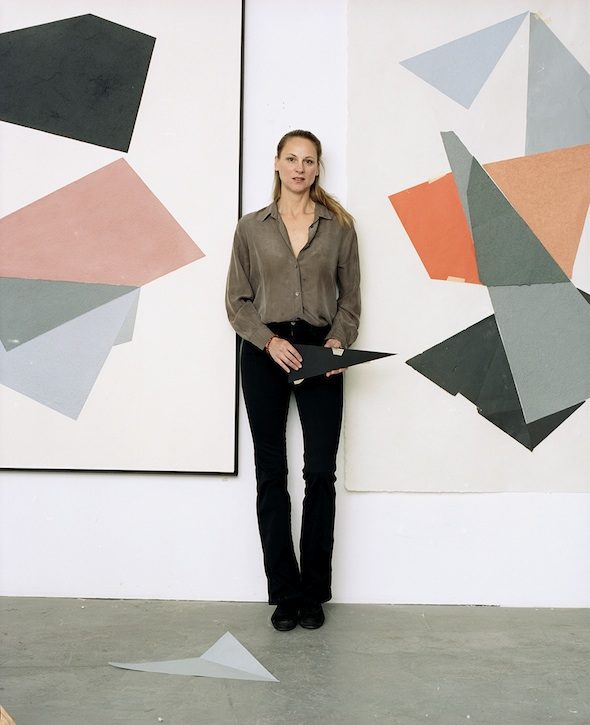 Having reviewed Strunz’s 2013 solo show at Contemporary Fine Arts, I was familiar with some of the philosophy behind her work, where folding and unfolding refer to processes of time translated through space. In the context of her artistic production, Strunz uses scale models to map the exhibition space and experiment with the structure of her final compositions. At the entrance to the studio, metal sculptures and folded paper works are piled on a high table, evidence of these trials. 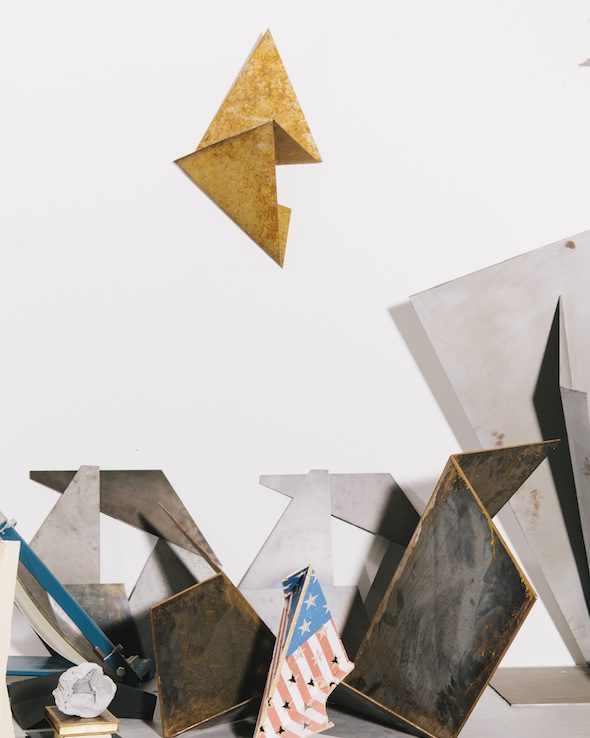 Strunz’s work has often been heralded as a contemporary manifestation of the modernist project, in particular reminiscent of Constructivism. Yet the pastel colours she uses distance her work from a mere reproduction of the movement’s stylistic signature. Strunz’s use of handmade paper pulp in her works makes them more akin to craft practices than the mass-produced fetishism of modernist art and design. 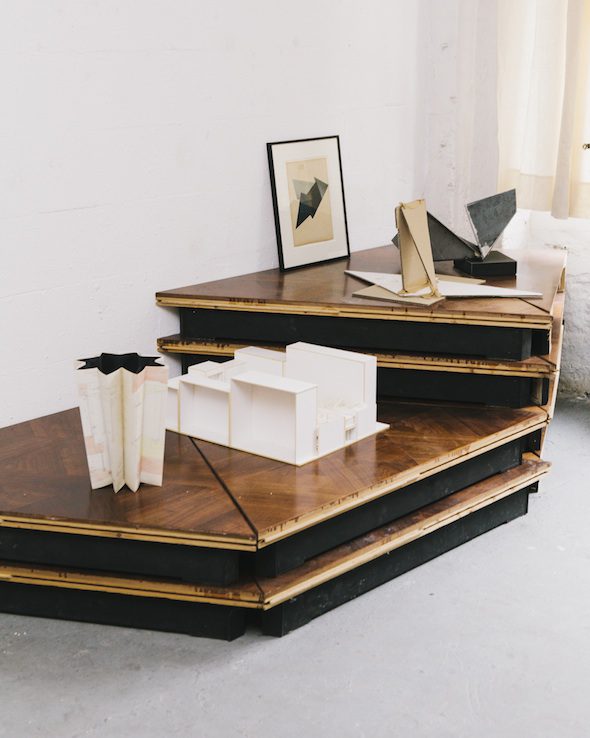 The concept of the book—its textual architecture as much as its content—forms a big part of Strunz’s conceptual thinking. Growing up in a small German town, Strunz was surrounded by castles, churches and other historical architectural references. She found refuge in books, where she could travel to other worlds, and where the world itself contracted to the space of her imagination. For Strunz, form and composition are the primary considerations, but the role that theory plays in her work is not to be underestimated. The two dynamics she regularly employs—folding and falling—are what the artist calls structures of the aftermath. The architectonics of her pieces visualize interruptions in time, the paradoxical passive activity of folding or falling. 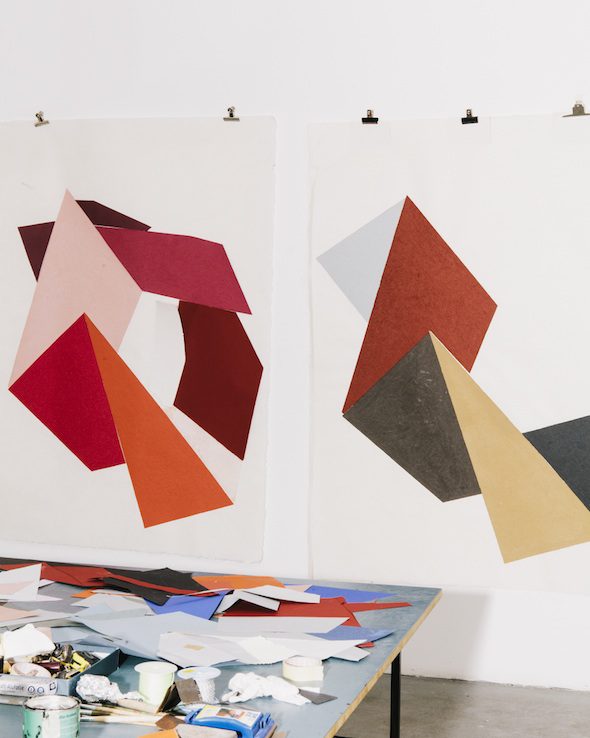 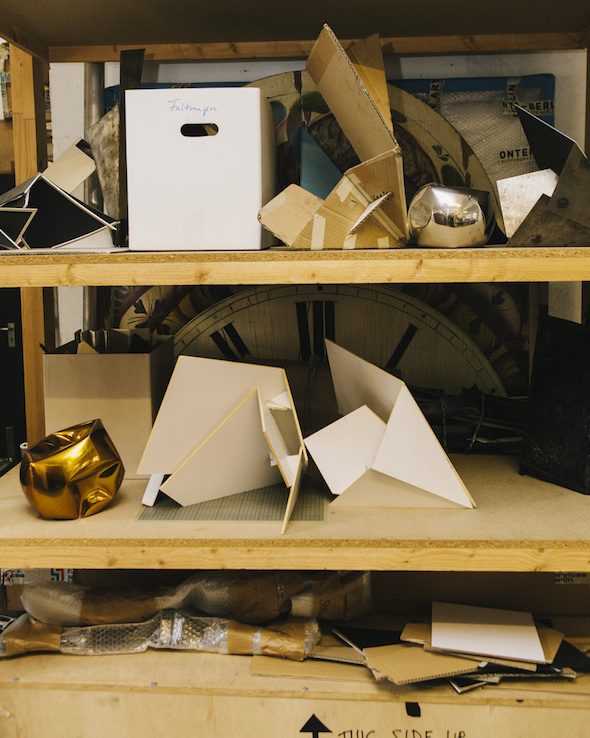 After touring around the various work stations of Strunz’s studio, we sat down to discuss some of the inspiration behind her works. She showed me a piece from her exhibition ‘Im Geviert’ at Saarlandmuseum Saarbrücken, philosophically indebted to Heidegger’s use of the term das Geviert (the Fourfold) to describe the schema of the world, divided between mortals, gods, sky and earth. Strunz’s sculpture in the garden of the museum is an artistic interpretation of this breakdown. According to Strunz, philosophers also create architectures with their intellectual construction of the world, which can be interpreted spatially. Tucked away in the drawers of her desk—yet hinted at through memorable quotations pasted on the walls—are Strunz’s negative space collages, in which portraits from Hans Memling’s illustrated books are recontextualized, the subject’s gaze subverted or removed. 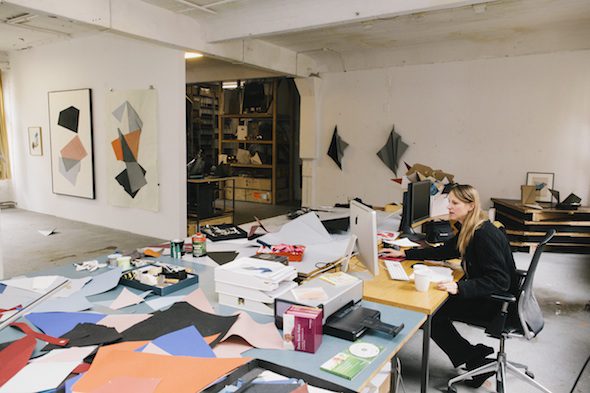 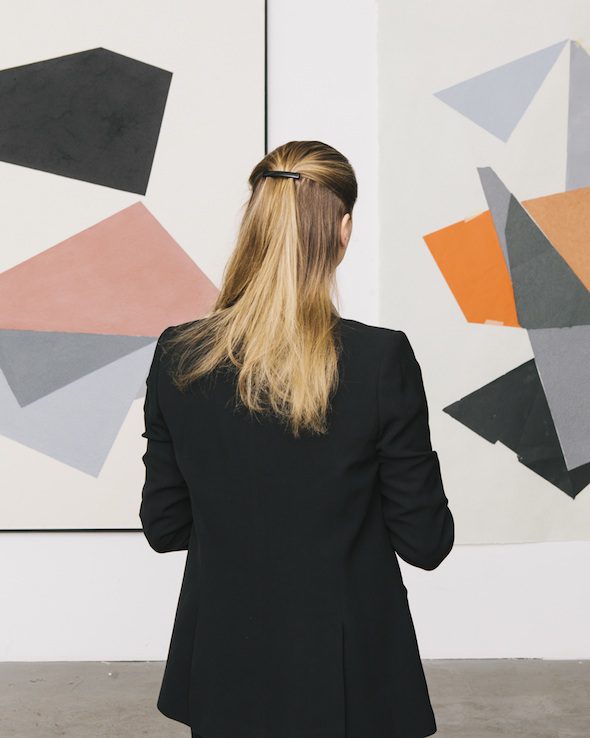 Though her works appear transparent and effortless, a brief meeting with the artist reveals that the origins are highly contemplative. Whether working in mock-ups, one-to-one scale sculptures or the minute details of pulp paper painting, Strunz’s attention to form appears as a direct translation of her theoretical prowess.

Alison Hugill has a Master’s in Art Theory from Goldsmiths College, University of London (2011). Her research focuses on marxist-feminist politics and aesthetic theories of community, communication and communism. Alison is an editor, writer and curator based in Berlin and a host of Berlin Community Radio show ‘Hystereo’.