An apt location to house part of the 9th Berlin Biennale, The Present in Drag, The Feuerle Collection‘s cool, dark expansive space both stages and participates in the dialogue initiated by the exhibition’s curators. A former World War II telecommunications bunker, the museum’s foundation is built upon a visible connection to the past—both in its architecture and collection of ancient art—in juxtaposition with contemporary art and culture, as a structure repurposed to exhibit a private collection in a public setting. In one continuous, open space punctuated by heavy pillars, the works of four artists are engaged in interaction. A sense of continuity and exchange manifests through a small-scale network of train tracks running along one side; a wall-length installation of pupil-like glass windows on the opposite side; and a partial enclosure of free-standing mirrored panels in the center. 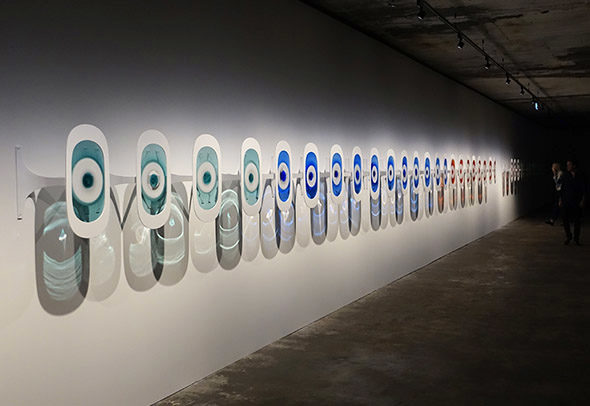 Vision, consumerism, and means of transit and communication underlie Yngve Holen‘s work, which comprises a series of glass-blown panes in various colors, designed to resemble talismans protecting against the ‘evil eye’, and set within frames that replicate airplane windows. Arranged in a row, each standardized, mass-produced ‘eye’ is slightly different from the previous one, the colors of the glass pupils change as they progress toward a darkened corner of the space lit only by black light, under which a subtle glow is triggered in the glass. Interweaving themes of the pervasiveness and timelessness of superstition, global accessibility, and commodification through touristic sightseeing, Holen’s work is supplemented by purchasable contact lenses of the same design: the symbol’s millennia-old protective powers reinterpreted in an updated format as Hater Blocker Contact Lenses. 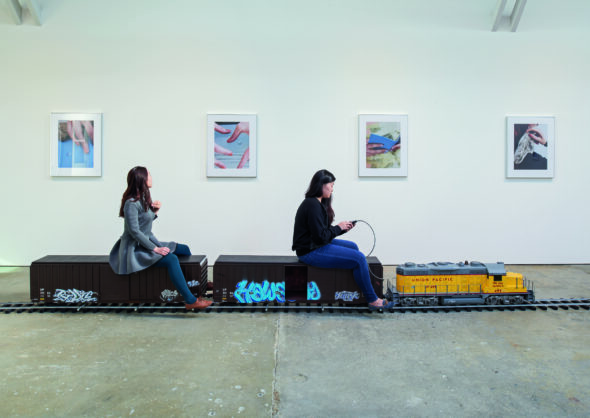 Across the space, Josephine Pryde‘s miniature train runs a course in parallel to her series of c-prints, which feature intimate close-ups of hands engaged in processes of communication, focused predominantly on touch screen devices. Rail transport, as a means of mobilizing travellers and industry, like Holen’s airplane windows, refer to communication and consumerism by means of mass transit and new technologies, while anonymous graffiti marking the train’s outer surface also allude to contemporary, urban visual culture. The hand-held mobile devices appearing in adjacent photographs further manifest technologies of communication in contrast with a human sense of contact. Connections fostered between the human and nonhuman, the immediacy through which information is transmitted, and the development of human relationships through a mediated sense of touch, emerge as universal and constant, while identity becomes elusive. 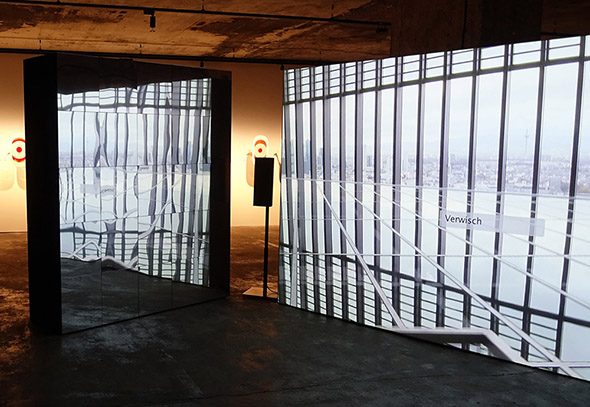 The three-dimensionality of the architecture captured on screen in Korpys/Löffler‘s two-channel video is extended into the space of the gallery through mirrored panels that function as both projector and reflector. The gridded panels of mirrors not only reproduce the video in reflection, but mimic the architectural forms of the European Central Bank Building that is its setting and subject. Layering the transparency of glass constructions with the opacity of mirrors that only permit access to images contained within their surfaces, the work considers representational structures of power and organized protest. An atmospheric soundscape pervades the video and the space, interspersed with wandering footage of the ominously vacant building. It evokes systems of surveillance in which the audience is also enlisted as they watch the video and watch themselves weave through the installation.  The images are overlapped by short blocks of quotes that pop up like text messages, accompanied accordingly by ubiquitous iPhone setting sounds. 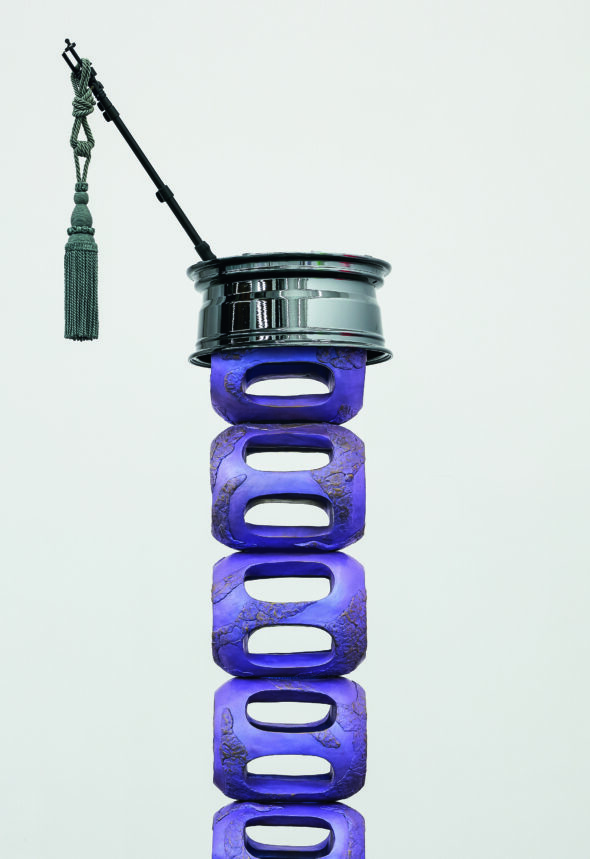 Outside this structure of mirrors and screens, also occupying the center of the space, is a group of sculptural assemblages by Guan Xiao. Composited from everyday, found objects and more traditional materials of sculpture, the resulting compositions are uncanny yet familiar. Integrating merchandise that evinces artificiality (artificial plants, selfie sticks) the objects also indicate elaborate processes of constructing images intended to appear authentic, even though this authenticity is known and accepted as only an appearance. Artificial is presented as the new natural in representational structures such as Sunrise, in which a formation of car tires, pipes and artificial plants set before a light box image of a sunset generates a futuristic, otherworldly scene of a ‘natural’ landscape. 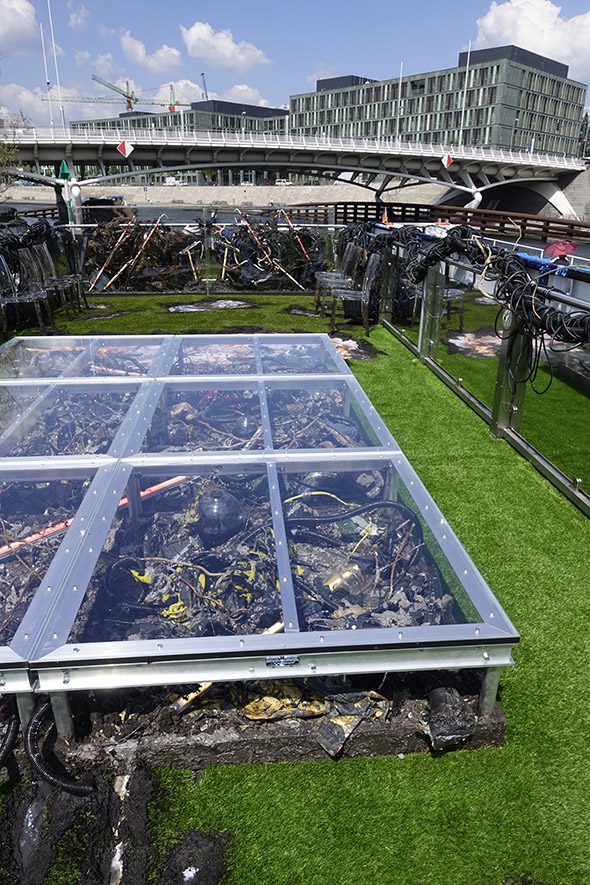 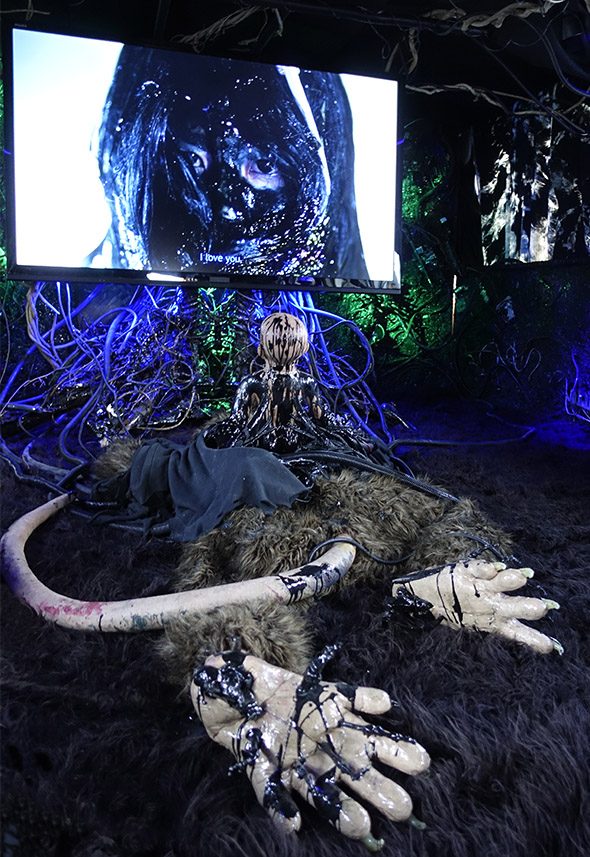 Korakrit Arunanondchai and Alex Gvojic: There’s a word I’m trying to remember, for a feeling I’m about to have (a distracted path toward extinction), 2016, Boat, mixed media, video, color, sound // Photo by Berlin Art Link

In another Biennale venue, the Blue-Star sightseeing boat of Reederei Riedel, a similarly futuristic landscape fusing technology and nature pervades. Set to embark on the main tourism route along the Spree, the mobile venue features an upper deck installation and performance stage, and lower deck video work by Korakrit Arunanondchai and Alex Gvojic. Covered with artificial turf and patches of scorched earth that open to reveal its inner machinery, the installation entangles artificial plant and sea life with wires, tube lighting and severed arms from human and animal bodies. A central glass case provides a view underground, showcasing the detritus and technological waste in a display reminiscent of an archaeological excavation. The video installation below comprises these themes in a narrative tracing relationships between human and nonhuman, evolution and extinction, conceived as a future populated by human-sized rats. There’s a word I’m trying to remember, for a feeling I’m about to have articulates the simultaneous experience of reflection and projection, memory and prediction, where in the present moment the future is already the past.