New media artists Alfredo Salazar-Caro and William James Richard Robertson are using their gamer backgrounds to shed light on current issues within the domain of art, using futuristic technology. The Digital Museum of Digital Art is an oculus rift-accessed platform, which is currently exhibiting spaces from the imaginations of five other artists at Import Projects in Berlin.

While the mechanism that powers the virtual reality make the artists’ works and the medium more internationally accessible, it also gives rise to a more immersive and intimate encounter for viewers. The experience offers a sense of the uncanny; it is at once familiar with its playful naive aesthetics and a disorienting engagement with a parallel world. We spoke to the artists about the project. 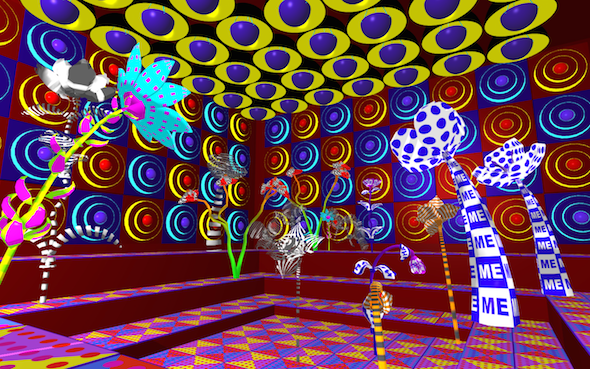 Claudia Hart: Gallery in the Digital Museum of Digital Art // Courtesy of DiMoDa and the Artist

Alice Bardos: How did you come up with the idea for the digital museum project in 2013?

William James Richard Robertson: Alfredo and I had been doing a lot in the dirty new media and glitch scene in Chicago, so we were doing a lot of shows including light installations and performances. At that time there wasn’t a lot of support for that kind of art from galleries, so we were looking for an alternative exhibition space for us and other artists that we came across.

From there it started as an email we sent off to some contemporaries about creating a digital gallery. It was about creating something in Unity or in a game engine and then posting it on the web. That kind of sat for a little while and then oculus came out and we saw a new opportunity. 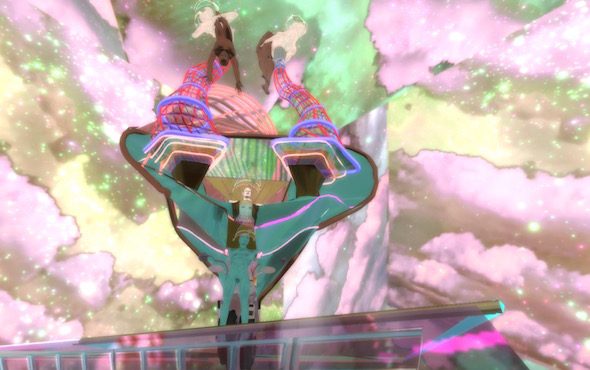 Jacolby Satterwhite: Gallery in the Digital Museum of Digital Art // Courtesy of DiMoDa and the Artist

AB: What was the thinking behind creating a virtual experience using oculus rift?

Alfredo Salazar-Caro: Will and I are both gamers, and when we started out there were some artists using game engines either for glitching or exploiting them for light performances. We were also a little obsessed with these engines. When oculus rift came out we were on it, and we thought about how easy it would be to translate our work for oculus. It became kind of a zeitgeist phenomenon from there.

WJRR: But frankly it’s quite new and there weren’t a lot of artists using it back in 2013. However, Alfredo knows other new media artists who were able to get a media development kit. I work with the Arts Institute of Chicago, so with that affiliation I had access to all of that sort of equipment, as well.

AB: Is there a central concept to this version of DiMoDa?

ASC: I think it’s all kind of one big experiment right now. Within the realm of new media I was looking for people who were talking about the body in the digital form. People took that concept in different directions though. For example, artist Claudia Hart actually diverged and developed something more spatial and abstract. AquaNet2001 made a piece of political satire. Jacolby Satterwhite went from a maximalist aesthetic to a minimalist aesthetic. Tim Berresheim is the only one that stayed true to the body in digital. Even though there is an overlaying theme, it’s a little loose.

WJRR: I think it’s important to note that none of the artists have previous experience working in VR so, seeing their works all together is exciting for us.

ASC: That’s also because even though there was a curatorial process, we had to divide our time: as we were developing the exhibition we were also working on the infrastructure. 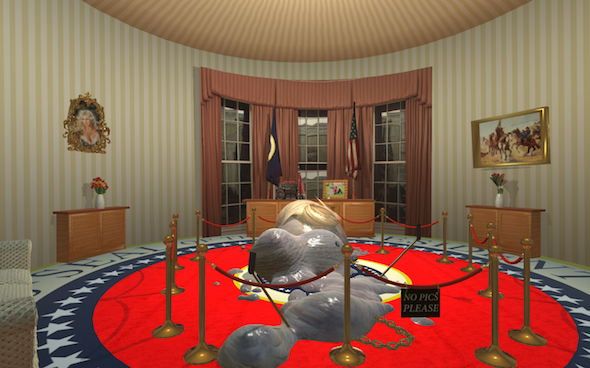 AquaNet 2001: Gallery in the Digital Museum of Digital Art // Courtesy of DiMoDa and the Artist

AB: Most of the galleries in the DiMoDa have quite a strong game aesthetic. To what extent is the DiMoDa influenced by that industry?

ASC: The pediment of the entrance has video game controllers. Will put some easter eggs around the space which are these secret surprises. It’s a tradition in these games, for developers to hide things around that you may or may not find. So that’s something that we’re carrying through from our gaming background. It’s also worth mentioning that we use free software: anyone can use Unity.

WJRR: That’s important for us especially when thinking about working with artists from different backgrounds in terms of accessibility. If we were to open-source any of our own tools then that would make it possible for anybody to build their own works as well. Even for us, finance is always a concern whenever putting an piece together.

ASC: In terms of being new media artists, being able to freely share ideas is really important.

AB: The oculus rift component of the exhibition focuses on the virtual interior of the museum. Why did you decide to create a visualization for the exterior to go along with that?

ASC: There is no reason to have it. However, we really wanted an anchor to reality. Maybe not one that had a one-to-one relationship. We wanted something that was familiar and yet surreal, just a little bit off of reality before the viewer can explore the wackiness of whatever each artist created. It was also a wonderful opportunity for me to explore my urge to create architecture without having a real architectural background. In a way it is exploiting the capabilities of virtual reality.

At the same time we’re both really against the replication of white cube spaces and then just putting installations in there. I find it quite dull to not take advantage of the power of the engine. 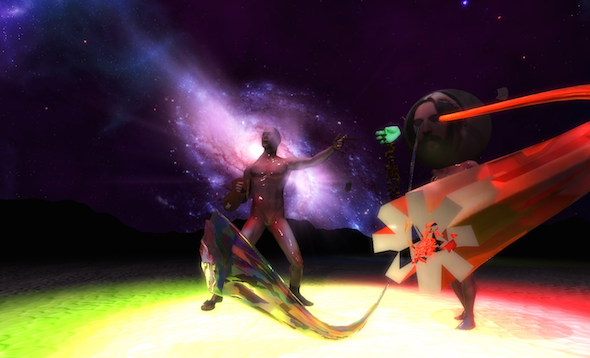 Tim Berresheim: Gallery in the Digital Museum of Digital Art // Courtesy of DiMoDa and the Artist

AB: There seems to be a general process of digitalization of art and culture, for example the 3D virtual modelling of the Valley of the Kings. Do you think that the DiMoDa has any kind of relationship to this trend?

WJRR: I definitely think so. I actually have a 3D scanner and I’ve been scanning everybody [laughs]. I work in a traditional museum, which is digitizing a lot of things. The process of digitalization poses its own problems though. What happens when your software becomes obsolete and a new operating system comes out and your work is not supported anymore? While it’s easy to capture things when we digitize them, we need to be weary because we also have to put a whole infrastructure in place to maintain the data for the long run.

ASC: It’s also funny, this idea of digitizing the Valley of the Kings. It’s existed for thousands of years, and people think that by making it into a 3D model we are going to outlive the Valley of the Kings, but digitalization can be a very frail mechanism. Maybe our project also speaks to that concept of the simulacra being more real than the real. In that same sense, we are a virtual entity but we are giving ourselves authority and calling ourselves a museum. 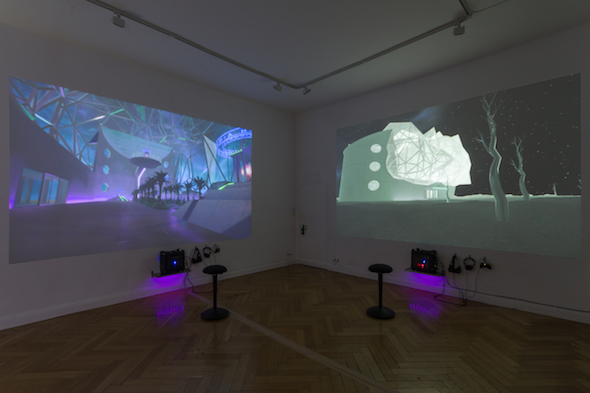 AB: When people go inside museums they might generally expect to see more artifacts, but your exhibition seems to be more curated around the exploration of the space. So why call it a museum?

WJRR: I think that there are some museums that do similar things as well. Though in someways it’s a critique of the current state of most modern institutions. At the same time we are committed to the idea of preservation. But most importantly distribution. We want to make art work widely accessible. Right now, we have these gallery exhibitions and one of the reasons behind that is that the hardware to run it is not popular. Part of the reason is that it’s expensive, limited and complicated to set up. We are bringing the IRL experience to a large number of people. I think that’s the goal of any institution.

ASC: As Will said, we’re dedicated to preservation, so while we’re commissioning new art works, we’re also dedicating our resources to letting those art works survive for as long as possible. DiMoDa was largely inspired by exhibiting works that before couldn’t be, even now there aren’t a lot of projects out there. There are a few, but some of them are only exclusively online, we want to be more archival and accessible.

WJRR: We can always go back and update the exhibitions from the past in a completely new software if we wanted to, if it’s artist approved. Other exhibitions are more static and can’t be updated.