The term “neo-tribe” is a sociological concept first used in a scholarly context by Michel Maffesoli, who posited that human beings have evolved to exist in tribal groups rather than mass society. The methods of establishing such groups are open: such a fully developed capitalistic society can offer routes to cooperation, rather than oppression, by being saturated with commodities. Thus, entering the crowd outside SOUVENIRby for the opening of Esben Weile Kjær and Anne Sofie Madsen’s ‘How to Neo-tribe?,’ one had to notice the constellations of brands, gazes, languages and affects that loosely bundled people together on Torstraße, and ask oneself: “Are we a neo-tribe? And if so, how?” 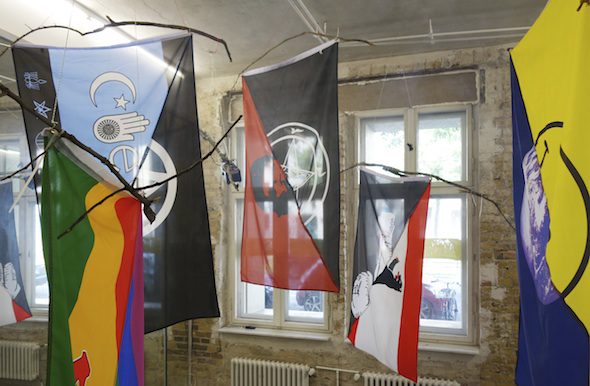 Esben Weile Kjær and Anne Sofie Madsen, ‘How to Neo-tribe?’ at SOUVENIRby // Courtesy of the artist and SOUVENIRby

Speaking to Weile Kjær in that nebula outside, remixing seemed to be his method. He mentioned the banners hanging in the entry room, each of which are really comprised of two flags sutured together. Sliced half-wise, Che Guevara’s iconic gaze meets the sigil of Baphomet, official symbol of the Church of Satan. Playful and destabilizing, surely, but Weile Kjær also stressed the combinatory tactics. In particular, the remix of the asexuality flag—which I didn’t even know existed and is tastefully purple, white, grey, and black—with that of the Antifaschistische Aktion. Threading these two symbols together introduces a critique of the latter group, which Weile Kjær and Madsen found to be overtly masculine. Vice-versa, a radical defiance tints asexuality. By such contrasts, the artists also trace the thread-thin line separating symbols of solidarity from brand logos. Whatever is capable of instilling such mythic unity is also exchangeable as an icon, vulnerable to decay and deconstruction: Samothrace’s Nike or the swoosh’s.

But ‘How to Neo-tribe?’ isn’t unveiling the entrapments of consumer culture (once again), nor is it mired in cynicism. The tribalism Weile Kjær and Madsen identify is, as Maffesoli writes, “without the rigidity of the forms of organization with which we are familiar, it refers more to a certain ambience, a state of mind, and is preferably to be expressed through lifestyles that favour appearance and form.” The boundaries of belonging to a neo-tribe are fluid, roam like the trends of fashion, are contingent upon something as simple as wearing Reeboks. If I were to go clubbing after the show at SOUVENIRby—which, notably, is also a shop—I would return home, swap personae by changing my outfit, then head out to join a different tribe at a different venue. While these alliances based on such exchangeability may be cosmetic and flimsy, they may also just be a mode of solidarity at present. 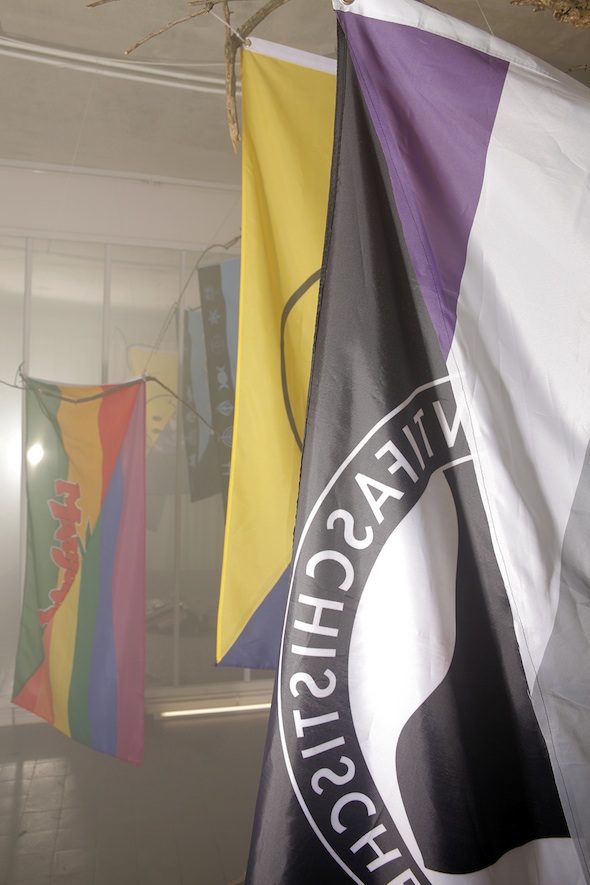 Esben Weile Kjær and Anne Sofie Madsen: ‘How to Neo-tribe?’ at SOUVENIRby // Courtesy of the artist and SOUVENIRby

Unsurprisingly, neotribalism has often been utilized as a concept in the scholarship of clubbing and dance music. The ritually charged spaces nightclubs present, not to mention their high degree of pageantry—think of Maffesoli’s “appearance and form”—are ideal venues for forming collectives that drift, strut, and dissolve. And like neotribalism, which reaches for past forms of human organization so as to ensure future survival, dance music is caught in a dialectic of nostalgia (be it Chicago in the 80s or Berlin in the 90s) and innovation. Weile Kjær and Madsen exhibit this relationship in the back room of SOUVENIRby: red-lit, fogged, and shuddering in the four-on-the-floor of an old-school techno track. A stack of raver-theory books, like ‘Clubbing: Dancing, Ecstasy and Vitality’ by Ben Malbon, are included in a Google SketchUp video that pans through a minimal bedroom. Projected through the scrim of a few-meter tall fence—the type often used to boundary music festivals—is a looping clip of red- and rust-clad dancers, the mass gyrating and generally freaking out. In discussing the latter, Madsen and I agreed that it was unplaceable, outside of time in the context of the show. Synced to the techno’s BPM, the crowd’s outfits look very “now” (think Yeezy palette) but the video quality is saturated and grainy. I initially thought Madsen may have designed the outfits—some of the aesthetics of her label are identifiable in How to Neo-tribe?, especially the deft mixture of synthetic and organic materials—but later I learn the video is sourced from a collective event in the 70s. None of the dancers are on drugs; the only source of music was a guru vocalizing a rhythm that Weile Kjær likened to beatboxing.

It seems fitting that the countercultural movement of the 60s and 70s is given a shout-out in Weile Kjær and Madsen’s show. Undoubtedly the type of tribalism by which we roam into the future is modelled not just on archaic principles of union, but also the rallying cries of a few decades ago: rejecting a prescribed identity or culture, constructing our identities and thus new forms of solidarity. Although the objects and installations—the “certain ambiance” or “state of mind”— in ‘How to Neo-tribe?’ are not in any way hippy-optimistic, the show is effective because it possesses a certain sincerity. Anyone is capable of appropriating styles, or Photoshopping some flags together, but there was an intention and criticality in Weile Kjær and Madsen’s compositions. It turns out most of us are already neo-tribing; the exhibition at SOUVENIRby just shows us how to do it well. 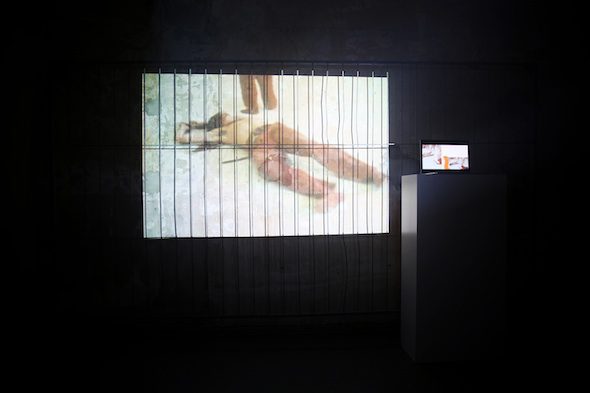 Esben Weile Kjær and Anne Sofie Madsen, ‘How to Neo-tribe?’ at SOUVENIRby // Courtesy of the artist and SOUVENIRby