‘Utopia Banished’ is the title of an album by the legendary British death metal band, Napalm Death. The album explores the psychic consequences of a political space in which idealism dies with a suitably untethered ferocity, mixing brutal musical intensity with an almost incomprehensible, post-human growl for vocals. Looking out at the smoldering wreckage of the year 2016, a year marked by horrific retail violence wrought by self-employed franchisees of the latest nihilistic terror organisation to disgrace the world with a deformed interpretation of religion; wholesale violence inflicted by state apparatuses on both domestic populations and citizens of countries on the other side of the world; and the slow-motion suicide of climate destruction, Napalm Death’s tortured barking sounds like an increasingly reasonable response to a world careering out of any semblance of control. The state of the future could scarcely be more tenuous. 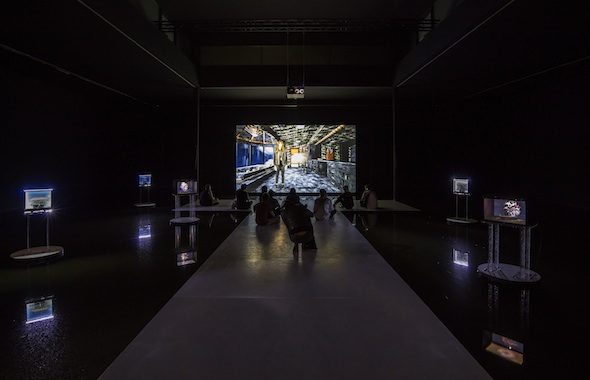 Cécile B. Evans, What the Heart Wants, 2016, installation view at KW Institute // Courtesy of KW Institute and the 9th Berlin Biennale for Contemporary Art

Contemporary art has often been guilty of envisioning deformed futures of its own, utopias of violence and the lust for a particular—often hyper-masculinised—understanding of power and passion. The ‘Futurist Manifesto’ may describe a kind of ideal, if not idyllic future, but reading the words of F.T. Marinetti and his cohorts, it is impossible not to see shades of the tech-fetishism that dominates both art and the wider culture of the current phase of late capitalism; “We want to sing the man who holds the steering wheel,” they write, “whose ideal stem pierces the Earth”. Well, it would be a guy, wouldn’t it?

I had occasion recently to reacquaint myself with the Accelerationist Manifesto, ‘#Accelerate’, and was struck by how backward-looking it felt, not least in terms of its bombastic rhetoric. Amid a number of valid points, particularly regarding the environmental crisis and the necessity of people with progressive values to embrace, rather than foreclose, a connection with advanced technology and science, were the forms of language and the organisational logics of a hidebound and essentially conservative belief system. “The future has been cancelled”, the Accelerationist proclaimed. But it turns out that the future wasn’t cancelled, it is now only available on the secondary market: a charity shop future for uncharitable times. A sense of requiem for possible futures infuses Cecile B. Evans’ ‘What the Heart Wants’, contribution to a Berlin Biennale that often seemed too paralyzed by angst over its own cultural positioning to truly engage the overwhelming discourses of the potential future, as well as the lost futures of the past. Evans’ video installation, in dialogue as it may be with other post-net polemicists like Ed Atkins and Oliver Laric, has a uniquely melancholic air, wedded to an awareness of the vacuity that lies at the heart of infinite possibility. Evans’ work could be wrongly characterised as nostalgic, but it does examine the perils of diving headlong into a future designed by someone else: before you leave the present, it might be a good idea to note which ideas are helpful and which are simply new. 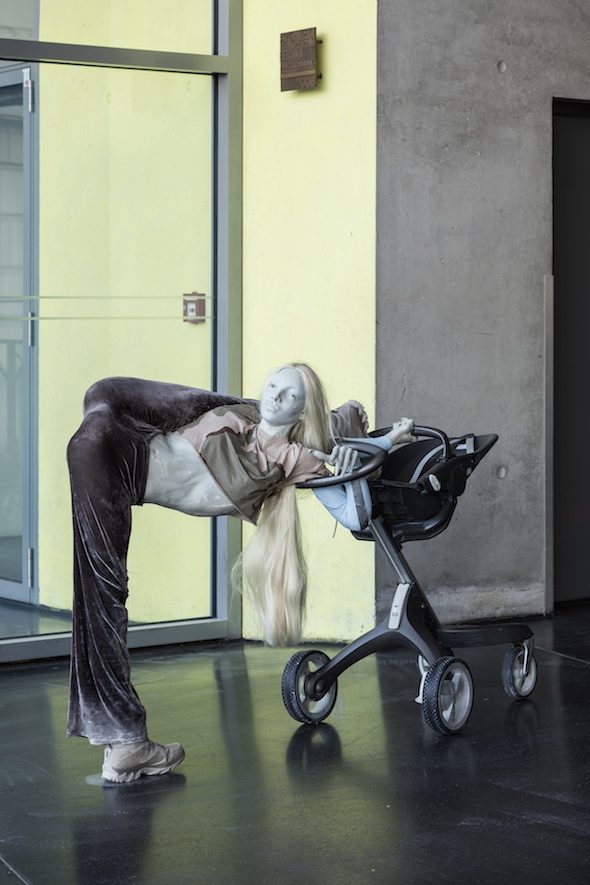 Both Evans and the Accelerationists are in agreement about one important fact: the future will be a contested space. The sense of urgency connected to this awareness is conveyed powerfully by the ‘No play—Feminist Training Camp’ exhibition at nGbK. The training camp—encompassing the multiple meanings of the latter word of the title—brings together works by a number of female artists, to explore the violent power dynamics that are increasingly defining the political discourse of formally democratic countries of western Europe, as well as countries in various states of internal and external revolution. Enna Gerin and Minna Henriksson’s work ‘Know Your Enemy’, in particular, is both a work of genuine visual potency and true political potential. The work consists of a map charting the social groupings and power structures that are being brought to bear on European society, alongside strategic and tactical approaches for expanding the space for liberatory practices and identities to emerge. Solidarity and sustained popular struggle has never been more urgently needed, and ‘Know Your Enemy’ presents a much less fevered and more clear-eyed manifesto for action than many self-consciously “politically engaged” art movements of the present moment even attempt.

Traversing the exhibitions outside the biennale—which, aside from Anna Uddenberg’s terrifying sculptural renderings of contemporary performances of femininity and Evans’ installation, provided much that was futuristic but very little that felt enduring—the struggle for the future felt present, if not always clear regarding the terms on which it would be fought. As someone who is averse to Claire Fontaine’s penchant for sloganeering sentiments—which tick all the sound and fury boxes but often don’t quite signify as much as they might—the collective’s exhibition ‘May our enemies not prosper’ at Galerie Neu, was surprisingly understated and, at times, eloquent. Fontaine present bladed fencing in the colours of the German flag, a grill from a public urinal evoking a kind of spiritualized readymade, a Duchampian mandala, along with a few typically Fontainean images: for example, a sculpture of a basketball net overstuffed with balls. But the work that struck me as most powerfully speaking to the moment and to the necessity of creating a new future, was a lightly daubed canvas on the western wall of the gallery. The canvas was hung with articles of clothing, mostly cheap looking sportswear, notably a hoodie that feels inseparable from the narrative that emerged from tragic death of Trayvon Martin, a young man in Florida who went to buy sweets and ended up dead at the hands of a self-appointed neighbourhood watchman. Who will watch the watchmen? is perhaps the Roman satirist, Juvenal’s, most enduring question and, possibly in spite of themselves, Claire Fontaine manage to create a work that poses the question in the idiom of the contemporary world without being exploitative.

Tomas Saraceno’s ‘Aerocene’, recently shown at Esther Schipper gallery, offered an element of utopian thinking. The exhibition centred on Saraceno’s idea of interspecies dialogue with one of the creatures humanity treats with the greatest suspicion: spiders. In ‘Aerocene’, Saraceno envisions a future in which human and arachnids cooperate to develop new forms of urban organisation. It is hard to imagine, say, Sunderland or Lyon’s local governments adopting Saraceno’s ArachnoFuturist vision of mobile cities connected by webs both material and immaterial, but it is the kind of thinking that at least posits a less regressive and violent future and points to one of the most important ethical frontiers humanity faces going forward: the necessity of integrating while not pretending to master the natural world. 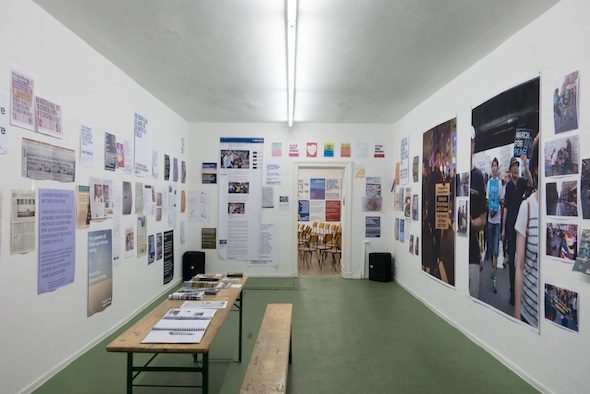 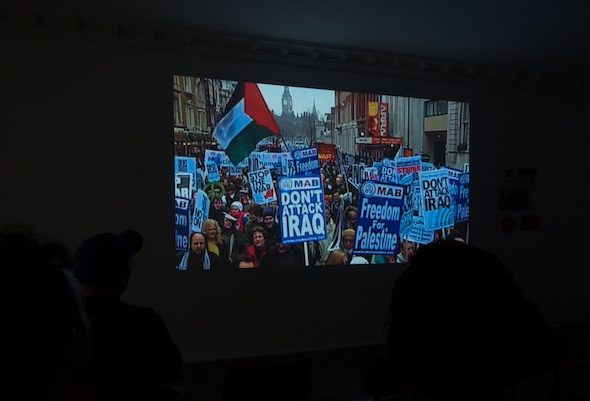 The exhibition ‘Meeting Place: Between Broadcast’, curated by Marianna Liosi and the gallery Between Bridges, explores the role of modes of video production and distribution that have emerged in the age of Web 2.0, as means of expressing and defining political activism. In ‘Meeting Place’, there is a sense of optimism and a commitment to examining “politically engaged” art not merely as agitprop, but as extended social practice. There is nothing romantic or utopian about the political struggles depicted in films like Stefan Constantinescu’s bleakly picaresque ‘Passagen’, which tells the story of a group of deracinated Chileans fleeing one flavour of dictatorship and ending up in another. Perhaps one cannot “win” the future, Constantinescu’s film suggests, but one can hope for it in spite of everything. Thus, Utopia may not be at hand, but it cannot be banished from the mind no matter what the world shows us.