Permitting an intimate glimpse into the lives of girls coming of age in China, at a moment in which the role of women is evolving and changing, Luo Yang‘s photographs illuminate the simultaneous independence and vulnerability underlying an adolescent fabrication of self. A recent pop-up exhibition at MO-Industries featured a series of Yang’s photographs in prints ranging in size, but invariably providing close views of the girls’ inner lives and their fleeting moments of exposure. Distinctions between straightforward authenticity and elaborate stagings dissipate in bold photos that meld a confident, unwavering gaze with the awkwardness of the exposed, uncertain self before the camera. 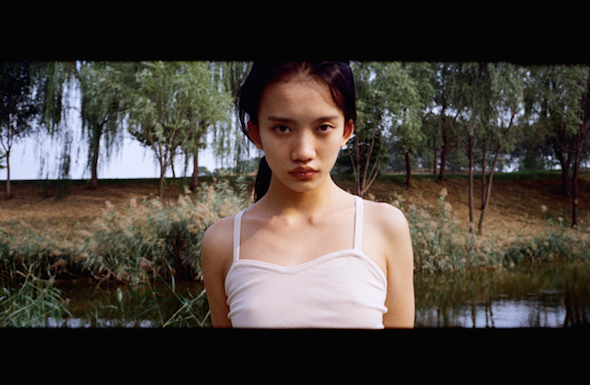 In varying degrees of bodily exposure, in settings that range from the most interior and private to those at the publicity level of a highway billboard, the girls appear both self-conscious and self-assured. Emanating a higher degree of rawness than an edgy fashion spread while demonstrating a similar sense of effortless, though semi-staged, coolness, the girls in Yang’s photographs evade a singular type—a singular mode of expression of self and femininity within contemporary Chinese culture. A Beijing-based photographer, Yang both relates to and is intrigued by the girls she documents in film. Whether depicting a solitary girl in the motions of daily life, or an intimate connection between two individuals, her images do not construct narratives of the subjects’ lives as such, but a constellation of single, often indefinable, moments.

Working in film, Yang captures the multiplicity of textures that comprise the fabric of contemporary life. Backdrops woven from patterned textiles, rooftop tiles, the gridded glass facades of modern buildings, and out of focus reflections on window surfaces interact and integrate with the bodies occupying these settings to produce a dynamic surface depth of collaged impressions. 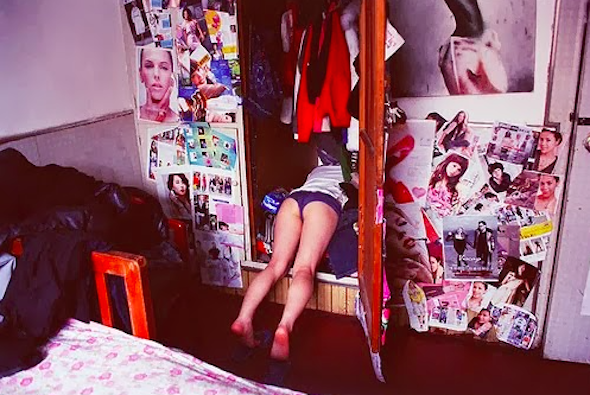 In one photograph, a girl’s bare legs protrude from the depths of her closet, on the outside of which clusters of photographs form a collage composed predominately of images of women. The photos within the photo do not appear to represent personal snapshots, but rather portraits suggestive of magazine beauty ads. Highly saturated reds permeate and dominate the photo, and the skewed angle emphasizes a degree of dishevelment, revealing a sliver of the partially opened door to the right and the patterned bed sheet at the bottom edge. The cropping accentuates the spontaneity of the moment, as the image layers distinctions between individuality and anonymity, authenticity and performance, to dissolve such categorizations within a moment of tangible ambivalence. The girl’s identity, her face, remains hidden from the camera, while the faces that do appear are imbued with a sense of anonymity in seemingly impersonal photographs as media representations of abstract notions of beauty. In an apparently personal space for the subject and perhaps one of comfort in a moment of vulnerability, there is little to reveal aspects of her identity or indicate a personal connection. This atmosphere of uncertainty articulates the position of an uncertain self that is still in process, perhaps negotiating competing desires to conform, on some level, and to cultivate an individual mode of expression.

Further elucidating the simultaneity of collective and individual experience, tattoos revealed on some of the girls manifest as markers of subversiveness, which nevertheless become ubiquitous—indicative of both belonging to one group and distancing from another. Tattoos emerge as one mode of signifying individuality and claiming independence, encapsulating a broader process of locating subjectivity through a transformation of body and self. From butterflies and flowers to the koi fish—a traditional symbol in Chinese culture—the girls display these signs as markers of rebellion and individuality, which locate them within a specific time and place and yet leave them untethered to such notions of specificity. Included among the artists exhibited in ‘FUCK OFF 2’, curated by Ai Weiwei at the Groninger Museum in 2013, Yang herself is part of an emerging generation of Chinese artists grappling with a social landscape in which individuality and artistic expression are repressed. Thinly cloaked in sheer fabrics or partially undressed, smoking or otherwise caught up in a moment of sensual intimacy, the girls in her photos enact a level of agency before the camera. Tracing commonality and difference, Yang discovers and works with new subjects as she moves from place to place, but all are linked by a similar drive toward independence, which manifests in partial realization—still in a state of fragility. It is a series in process, one that Yang continues as she changes direction and place—one that evolves and grows along with her, suffused with a sense of possibility.

Tacked directly onto the gallery’s bright green walls in a nonlinear manner, devoid of framing or mounting, the personal snapshot quality of the photos was preserved in the mode of exhibition at MO-Industries. Its impromptu, spontaneous quality paralleled that of the photographs, mirroring the self-conscious effortlessness and cool confidence of the girls. A pervading sense of impermanence and instability foregrounded subjects captured in the midst of personal and cultural shifts, growth and discovery. 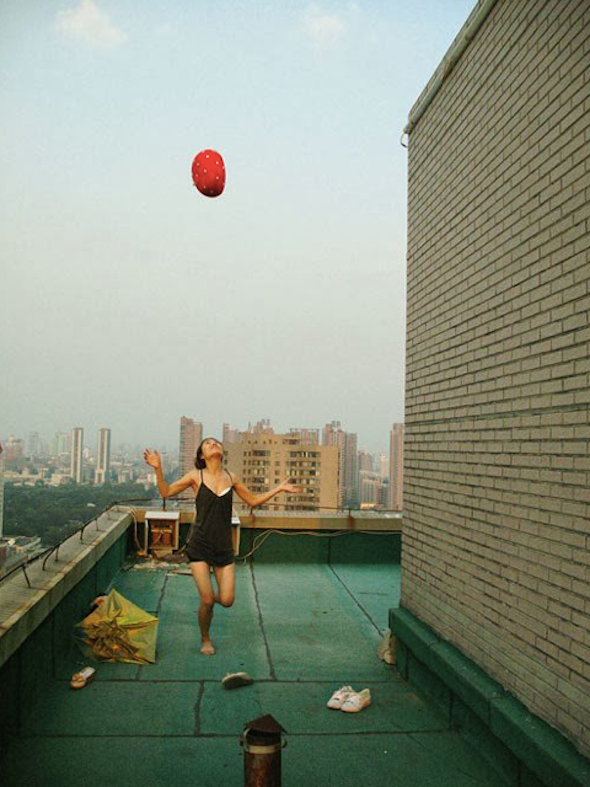 Viewed from a distance, before a backdrop of towering high-rises, in another photo from the series, a girl on a rooftop is caught in an ambiguous moment of excitement. Looming above the cityscape, an object that may either be falling down or flying upward is temporarily suspended, its precise trajectory remaining untraceable. It’s a moment of anticipation and uncertainty, unfolding on a stage that is bordered by an immovable brick wall on one side, opened to expansive depths on the other, and unbounded directly overhead.