The term “Afrofuturism” was coined in the 1990s by the cultural critic Mark Dery, who recognized a preoccupation with the future in the work of a number of black artists. Ever since, it has remained a term that is retrospectively applied to seemingly disparate artists, from Missy Elliot to Toni Morrison. What unites the movement is a shared fascination with the black experience, particularly in America. It is about seeing the world anew, rereading the signifiers, repurposing, remixing, refusing and recreating them. And, in so doing, Afrofuturism posits a future that disrupts the present and calls out its injustices. Krista Franklin produces poetry and visual art in the Afrofuturist tradition. Her poems and art works have been published in Black Camera, Copper Nickel, and Encyclopedia, Vol. F-K. Franklin’s work has been exhibited nationally in the U.S., and was featured on 20th Century Fox’s ‘Empire’ (Season Two). We spoke to her about her artistic interpretations of the future. 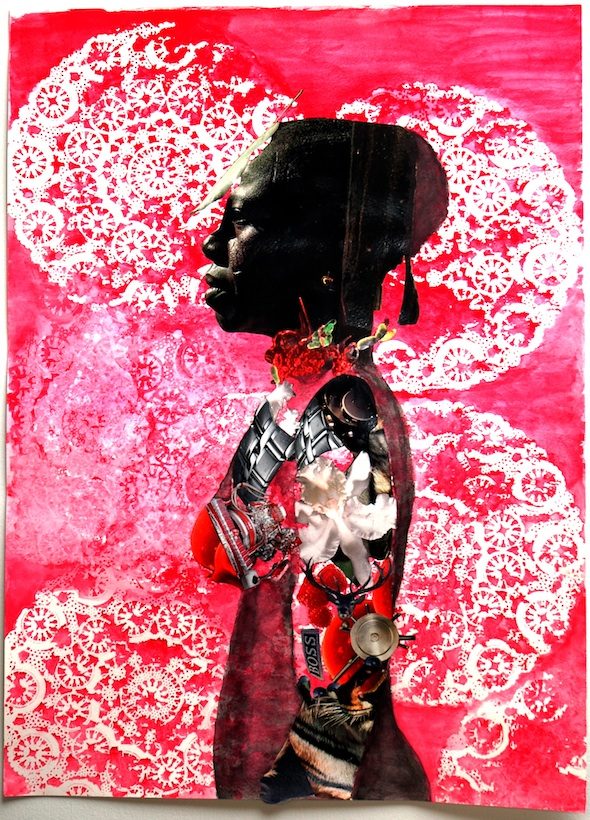 Krista Franklin, Do Androids Dream of How People Are Sheep,
Mixed media on watercolor paper
2011 // Courtesy of the artist

TL Andrews: Let’s start with a definition. What is the best way of describing Afrofuturism?

Krista Franklin: It’s very complicated. A lot of people have a lot of varying definitions, but for the most part I would say Afrofuturism is a cultural movement that revolves around the intersection between the lives of people of color and technology, science, science fiction and speculative fiction. We look through the filter of black lives and see them through a kind of futuristic lense, using mainly science fiction or science.

TLA: It also has a strong surreal element to it.

KF: Yes it does, but you know I always try to caution against conflating those two things. Afro-surrealism is also taking a step forward in the critical theory and in the work. I like to keep the two separate because surrealism is very different from science. Surrealists are thinking about nature, they’re thinking about the subconscious mind, altered states. But I definitely understand exactly what you’re saying when you say there is an element of the surreal inside of African futurism.

TLA: What do you think is the power in surreal representations?

KF: For me, as an artist and writer, it’s a liberating space. It’s a space where I’m able to access the nuances, the subtleties, the absurdities and the strangeness of what it means to be an African American woman in the 21st century. I’m able to access a lot of dream world landscapes, things that we don’t normally encounter in our everyday lives: symbolisms, mysticisms, ancient ideas about religious pantheons. I’ve always been interested in mythology and folklore, so it would make sense for me to be drawn to the idea of the surreal. You read Greek mythology and you see there is a lot of crazy shit going on. I feel like it gives you permission as an artist to access those spaces that we don’t think are tangible or real.

TLA: What attracted you to this form?

KF: I’ve always been interested in comic books, science fiction films and sci-fi literature. So it wasn’t that big of a leap for me to make work that reflected what was happening inside of my imaginative space. I wanted to create these images that really show what the black, brown and Asian body looks like in these futurist worlds or science fiction environments. You don’t really see that a lot in film. You don’t see it a lot in literature, especially when I was growing up. I was born in the 1970s and it wasn’t common to see a black body in science fiction. So I always wanted to create images of what that could look like. 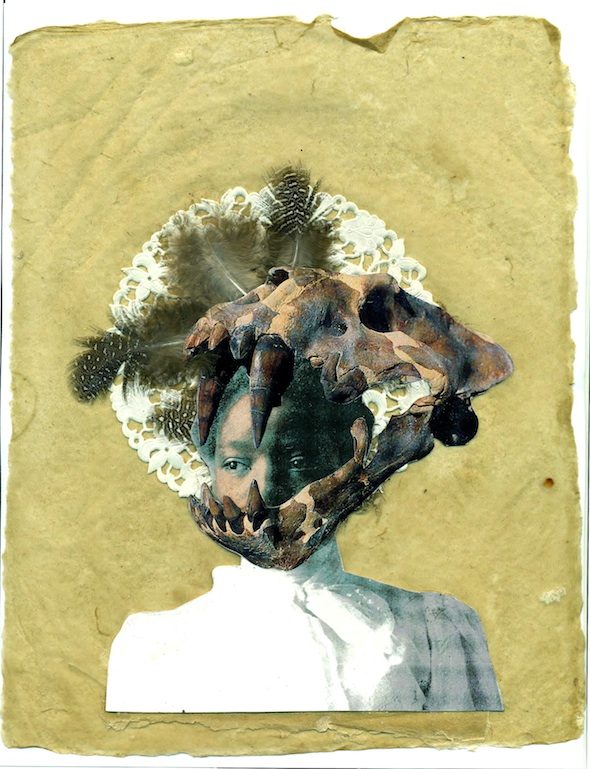 Krista Franklin: ‘We Wear the Mask’, Mixed media collage on handmade paper, 2013 // Courtesy of the artist

TLA: Aside from white normative narratives, what do you think is the reason for the exclusion of black bodies from that environment?

KF: Outside of what you already stated it seems like, at least in America, there’s a very specific agenda to misrepresent black bodies or to erase them altogether from the narrative. I don’t think it’s even a conscious thing all the time when they make these films or write these stories, but suddenly when it’s done there are no people of color. How can it be that in the future there are no people of color? So I’m not sure what the agenda is, but there is definitely a compulsion in America to erase black people in this country. Suddenly, we’re invisible.

TLA: A lot of what you’re saying is rooted in the African American experience. But given that “Africa” is central to that term, how do you see your work in terms of its Africanness?

KF: Even in calling myself African American I feel like it’s somewhat of a misnomer. It does generally categorise me in a strange way because the continent of Africa is huge. And being someone who was born in the United States and is black…that record keeping was not so good. We have no idea, many of us, where we came from, who our ancestors were, what countries they were dragged from. It’s a very generalized term, I think, but the closest approximation for me is simply to show my alignment with the global black experience. There’s so much rich culture that I am still exploring around blackness, and Africanness.

TLA: What role does protest play in your work?

KF: The art of collage for me is an act of resistance. I was a child who was very influenced by the media. I loved television, I had a deep love affair with MTV when it started. A lot of the visual elements that show up in my work today came from my being very influenced by the visuals of music videos. The print media especially were also influential in the way that I saw myself. So, when I do collage, I think of it as an act of resistance. I’m deconstructing those ideas and reconstructing them and reforming them into something that most reflects how I see myself and how I see the people around me. So when we talk about protest, that’s the biggest manifestation of my protest against those who would want to see us in one particular way. I disrupt that.

TLA: You mentioned MTV as an influence. Who were some of the other influences?

KF: I’m a big film buff so a lot of films: the work of Michael Mann, James Cameron, Steven Spielberg, there are so many great directors, who I love. Also literature was huge for me, I was a big book nerd. I mention Morrison a lot as a great influence, but also Alice Walker, EE Cummings—I love what he does in terms of disrupting language.

TLA: What trends do you see in the movement right now?

KF: I’m recognizing that social media is expanding the breadth and the width of it. I’m seeing a lot of work coming out of Africa, India and other places that I might not have had access to before. I’m seeing a trend of people really engaging the concept of technology and the way that science and technology influence our lives. 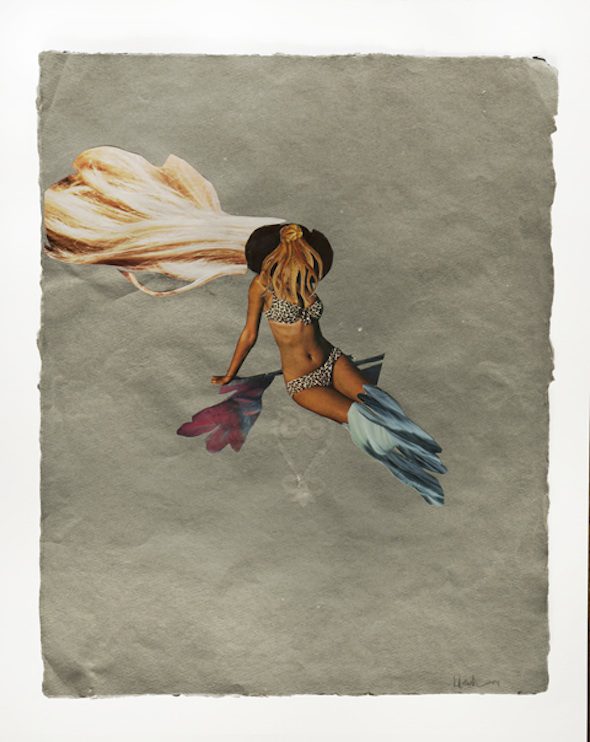 Krista Franklin: ‘We Wear the Mask III’, Collage on handmade paper, 2014 // Courtesy of the artist

TLA: Would you say that your conception of future is utopian, dystopian or is it purely an extrapolation of where we are now?

KF: It’s mostly an extrapolation but I will say that I have a romance with dystopian themes. That’s always been the case, my imagination tends towards the dark. Octavia Butler is a huge influence for me when it comes to that kind of thinking about the future and what the future looks like for us in America. For me, the future is now too: we’re living in a wild time. So my view of the world is an extrapolation of the present and how we survive it.

TLA: What do you see as the power of collage?

KF: It’s all about juxtaposition, to add things together that people wouldn’t normally add together. The mash up, if you will. I am interested in colliding worlds, spaces and cultures such as the animal and the human, which I play around with a lot. I use a lot of black printed matter as well. ‘Ebony’ and ‘Jet’ magazines are two place that I pull from a lot, in order to tease out a lot of “black history” and then push it forward into wild spaces.