Inasmuch as a stoic, blue-jeans wearing, pavement spitting man in the 70s would be considered a man’s man, the production of ‘Mephistoland’ at Maxim Gorki Theater can be considered theater’s theater. This play is so intertextual, referencing works from ‘Faust’ all the way through to ‘Les Miserables’, so self-reflexive and so socially critical that other forms of theater could verily confess to having man-crushes on its virile theatrical talents.

‘Mephistoland’ is a dystopian positing of a European future; or, more damningly, a short extrapolation of the status quo. This is a world in which theater directors aspire towards a “healthy Nazi culture”, where homophobia and anti-semitism are back en vogue and citizens stage hunger strikes to protest the arts. In Goethe’s original play, Mephisto is the name of the devil who bargained with Faust in order to give him a moment of transcendence. All the characters in ‘Mephistoland’ seem to be driven by a demonic presence that force them to do strange and destructive things. But none of them ever achieves transcendence; theirs is a collective journey down a slippery slope in which the devil has not upheld his side of the bargain. 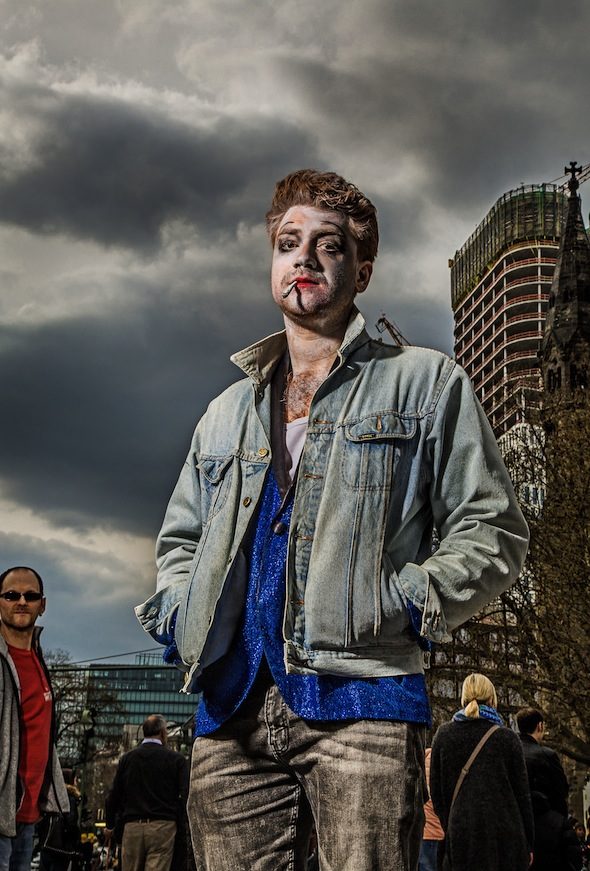 Director András Dömötör has chosen a decidedly non-linear form of storytelling. The audience is pulled through a series of disjointed scenes as the narrative cavorts through deeply political and emotionally fraught territory. Not everyone in the audience will keep up with this steady pace. The heady pontifications are counterbalanced however with some thoroughly amusing physical comedy. Whether it is a bunch of straight men trying to recreate a gay sex (crime) scene, or an actor playing Hitler who refuses to kill himself because he loves life too much, the script is equal parts comedy and pathos.

Bettina Hoppe steals the show in her captivating renditions of megalomaniacal directors, dictators and artists. She manages to infuse all of the many roles she slips into with vigor and authenticity, before slipping right into the next one. Her comedic sense is nothing short of deft.

It’s hard to believe that the piece was originally written in Hungarian since so many of the themes and characters are quintessentially German, with Goethe and Hitler taking up opposite ends of the German virtue spectrum. This can perhaps be traced back to the fact that European history, both in the past and, as the play asserts, in the future, will be heavily influenced by Germany. In fact, the present is also affected by this maxim on the day of showing. Outside the Maxim Gorki Theater, there is a massive cage containing several tigers. The activist group called Zentrum für Politische Schönheit has launched ‘Flüchtlinge fressen’ (Eating Refugees), issuing the German government with an ultimatum. Unless they change the laws—so that refugees can come into the country by plane— by June 24th, one refugee (still to be announced) has vowed to publicly feed himself to the tigers.

It is highly disconcerting that the form of protest imagined in the play, a hunger strike, is tame compared to the vicious real one being staged just outside. The gladiatorial barbarism of that kind of death is something even the most avant garde artists wouldn’t dare to imagine. Yet the current refugee crisis seems to have dragged many Europeans back to that level of civilization. In that sense the play’s metaphor seems weak in comparison. We are not in the middle of a slow deterioration akin to starvation: Europe’s end is more like a sudden, brutal dismemberment.

One can’t help walking away from the production thinking that we are all caught in an absurdist play ourselves, blinded by the spotlights on us, doomed to replay farcical scenes from our history that become more ironic each time we perform them. For one refugee, however, there might not be a curtain call.