Traversing the social, political, and economic shifts within Europe’s landscape, the group exhibition ‘As If, At Home: Artists in Europe’ curated by Jurriaan Benschop at BOX Freiraum takes the arts as a filter through which changing and diverse perspectives manifest and coalesce into a more comprehensive view of the present. Situated in the open, brick building of the former late 19th century stables, the works are also anchored in memory, history, and a layered and varied present of abstract underpinnings and personal impressions. Though common themes run through the exhibition and weave it together, the individual works and artists have been provided the space and flexible scope to articulate their diverse positions. 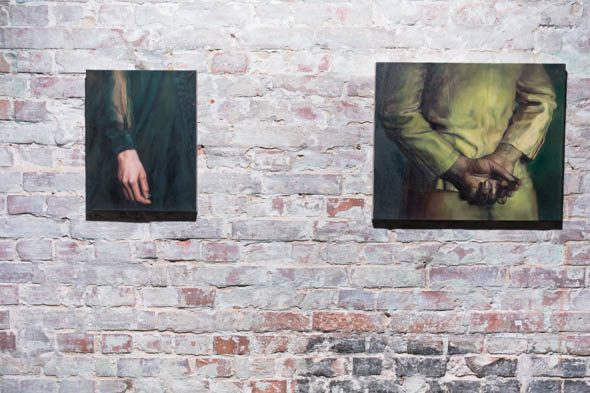 As an exploration of Europe’s diversity through its varied artistic production, the exhibition functions to both assemble and individualize works, alternately allowing disjunctions to emerge and links to form. The works reference identity, immigration, oscillations between presence and absence, and feelings of isolation, ambivalence and uncertainty, in the current political climate and in the wake of recent events and their effects on processes of transformation. 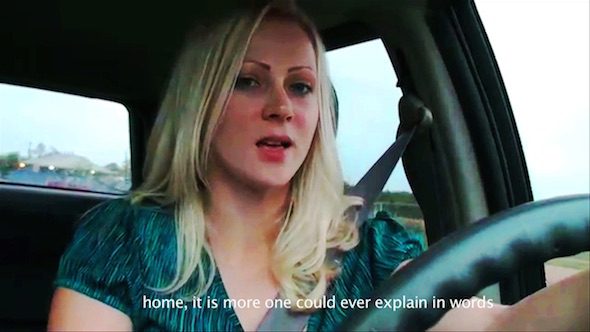 Underlying a pervasive element of humor and lightheartedness, pertinent considerations about the nature of home and both national and personal identity surface in two video works displayed opposite each other. Flo Kasearu‘s ‘Estonian Dream’ is pieced together from the existing footage of a YouTube video blogger, as a retelling of a personal story. The young Estonian woman posts videos under the username ‘Texasgirly1979’, and narrates the mundane aspects of her American life, while following and relaying reports from the home country with which she still feels a deep connection. Beyond the playfulness of segments documenting activities of her cat and dog, as well as those that reveal an enthusiastic embracement of an American lifestyle and its traditions, there lurks a nostalgic and idealized vision of a remote and unattainable homeland. Alternations between sequences, such as that of the young woman adorned with American flag accessories and another in which an emotional response is triggered while listening to Estonian music in her car, reveal the complexities of identity in relation to place and a sense of belonging. 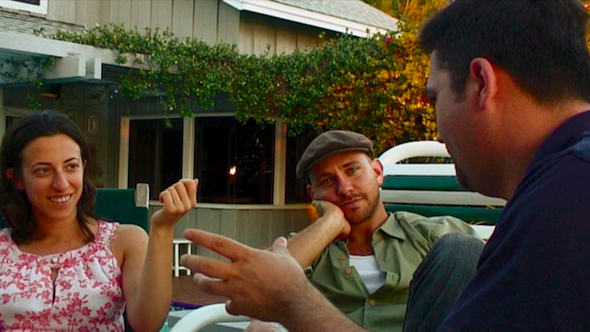 Situated across from the display of Kasearu’s work, a video by Romanian artist Irina Bucan Botea similarly employs an element of humor and extracts from commentary found online to consider questions of origin, modes of storytelling, and the nature of stereotypes. Her video, ‘Stereotypical Conversations’, stages a reenactment of quotes from online threads, in which Romanians discuss characteristics and cultural peculiarities of American identity. Though based on actual conversations, the dialogue unfolding in the video is a performance. The conversation could appear to be taking place between Romanian’s living abroad and contemplating a ‘general American character’, but the four participants are Americans describing themselves from another’s perspective. This repositioning of self and other produces a conflation of identities through which the pre-conceived notions illuminated by the dialogue are destabilized in the process of its articulation. 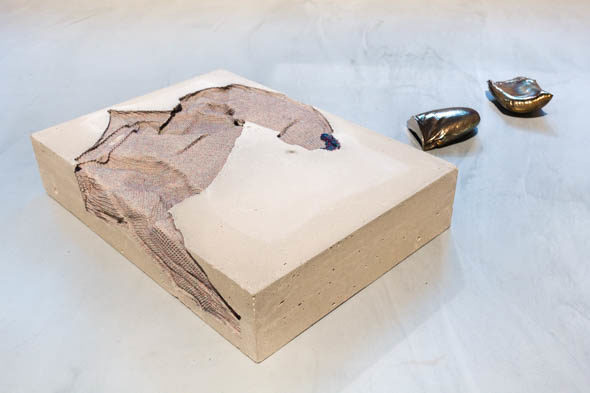 Existing only as material traces (artifactual recordings) of presence and identity, Danish artist Marie Lund‘s sculptural casts of garments inhabit the boundary between interior and exterior, as the outermost covering of the body and a surface projection of individuality and personal identity. Complicating the relationship between inside and out, body and clothing, ‘Hand Full’ comprises bronze casts taken from the inside of the artist’s jeans pockets. As a space meant to hold personal belongings, the pocket, turned inside-out, is supposed to reveal something hidden, however its emptiness is necessary in order to procure a cast and record its form. In her adjacent work, ‘Torso’, a pullover is imprinted in a block of concrete. The material contrasts between concrete and textile—permeability and flexibility versus impenetrable solidity—emerge to dissolve distinctions between the two, as small fibers extracted in the concrete give color to the imprinted texture of the garment’s amorphous form, frozen within hard-edged geometry. While in the bronze work the inside is transposed to the outside, the concrete pullover cast repositions the exterior as interior. In the process, abstract renderings of tactile objects are imbued with a greater sense of tangibility and presence through their own absence and that of the body that wears them. 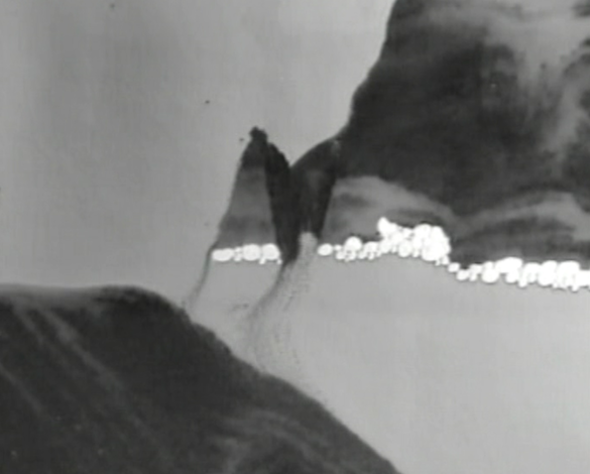 Unfolding an uncertain and unstable presence before the camera, Miroslaw Balka‘s ‘The Fall’ conveys a sense of unease and ambivalence, as well as a quality of existing outside of time—appearing as either material debris from the past or the mutations of a mysterious, otherworldly substance. Time itself forms the material and subject of the black-and-white silent film, as granules of unknown origin fall from the top of the screen, trickling down as though through an hourglass, to construct an uneven landscape below. The granules are a tangible record of time passing, an ever-changing representation of the present and encapsulate the broader sense of shifting, instability and dislocation of perspective and position that pervades the exhibition. It is a presence that manifests as absence, a space that is both emptying and being filled in—the unidentifiable, changing terrain of a placeless landscape as a screen for countless projections.