“Objects appear and disappear like fins of dolphins on the surface of the sea, and objectness gives way to sheer obsolescence. What is important is no longer the object, a concretion inherited from the codes, but metamorphosis, fluidity. Not a dolphin, but a trail, an energetic trace inscribed on the surface.”

Jean-Francois Lyotard‘s 1977 text ‘Energumen Capitalism’ sets an abstract stage from which to view ‘Inflected Objects # 2 Circulation – Otherwise, Unhinged’. The exhibition is curated by Melanie Buehler, founder of Lunch Bytes, a series of talks on art and digital culture that took place from 2012 to 2015. ‘Circulation’ is the second part in a three part series that Buehler is hosting at Future Gallery. The premise of the exhibition is to explore the digital, physical and ideological world we live in today, as a vivid off and online ecology. 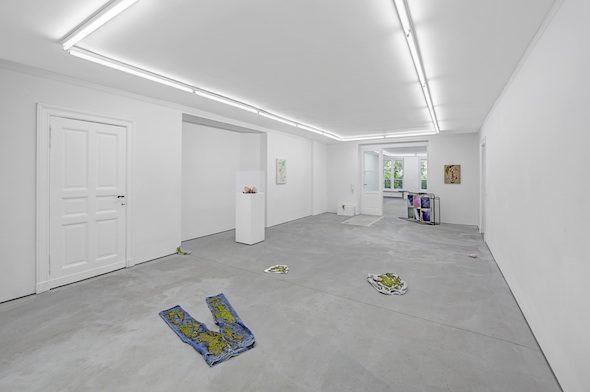 Grounding Lyotard’s opening spectacle—which seems to point at an invisible rupture of energy that becomes fluid/solid matter emitted through theological thought—is a series of works that deal with the synthetic as the neo-natural, in an age of plasticity. Using an exceedingly complex, multilayered technological and economic infrastructure, the works in the exhibition try to map material immortality in a world of imminent extinction. A surreal metaphysical ecology is articulated to the viewer via Lyotard’s dolphin. 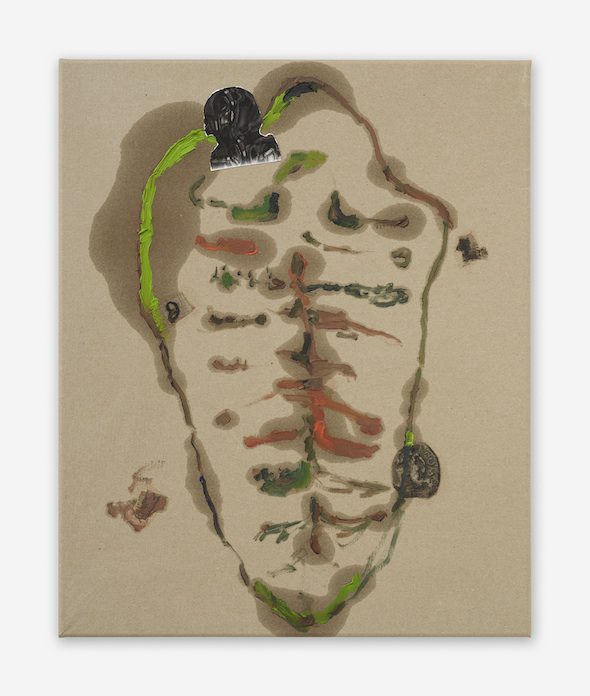 The conceptual framework brings to mind the recent scandal of the baby dolphin that died due to overexposure: literally and figuratively, the dolphin was found on a beach by holiday goers and passed around whilst people took selfies until it died, and was then discarded on the beach. While Lyotard references these majestic creatures, the dolphin-selfie scandal also likely comes to mind in light of the recent opening of John Kelsey’s solo show at Galerie Buchholz, around the corner from Future Gallery, where he used one of the images as his invitation card. The prevalence of the dolphin image leads us to ask how certain things cease to be considered living beings in our data-obsessed society. Culturally, we grab and hold and mark nature not only to observe it as a natural wonder: we have been trained to capture everything, grafting life and experince to us through physically aggressive acts of documentation via digital devices. This is all too clear with the work of Bea Fremderman: she presents clothing that is repurposed as a site of growth. Sprouts are grafted onto old jeans, t-shirts and a white sports sock that is casually draped next to the telephone in the gallery. Is this the future of nature? Snacking on your superfood sports socks while having a convo across the equator line? 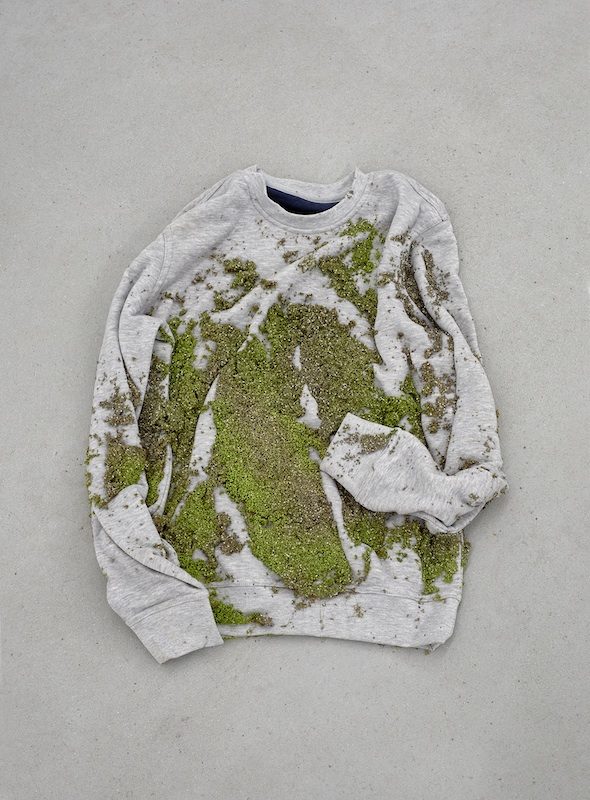 Tamen Pérez‘s paintings, however, turn the idea of neo-vogue metropolitan user on its head, bringing the mortality of artworks themselves to the very forefront of the discussion. With certain built-in material limitations—she used Rubén Grilo‘s Everfresh Paint, an oil paint that never dries—Pérez’s work mimics tribal symbols alongside garish botanical sketches using dried flowers. She maps the canvas in an archaic, almost obsolete but intriguing way.

But what happens when nature grafts itself onto us? Juliette Bonneviot alludes to this man-made nature as the great aggressor with her ‘Xenoestrogens’, lurking or residing against walls or nestled in the celling like closed-circuit television units. They are concoctions of Lead, Cadmium, Aspirin, silicon rubber, soy, pesticides and Aluminum that are able to change your estrogen levels by mere proximity, feminizing our life cycles and assembling gender in unpredictable ways. Silver and futuristic, they melt into crevices and begin their somewhat parasitic sex changes in the most beautiful ways, like fatal Nepenthes plants luring the intoxicated human, only to devour their masculinity rather than their flesh. 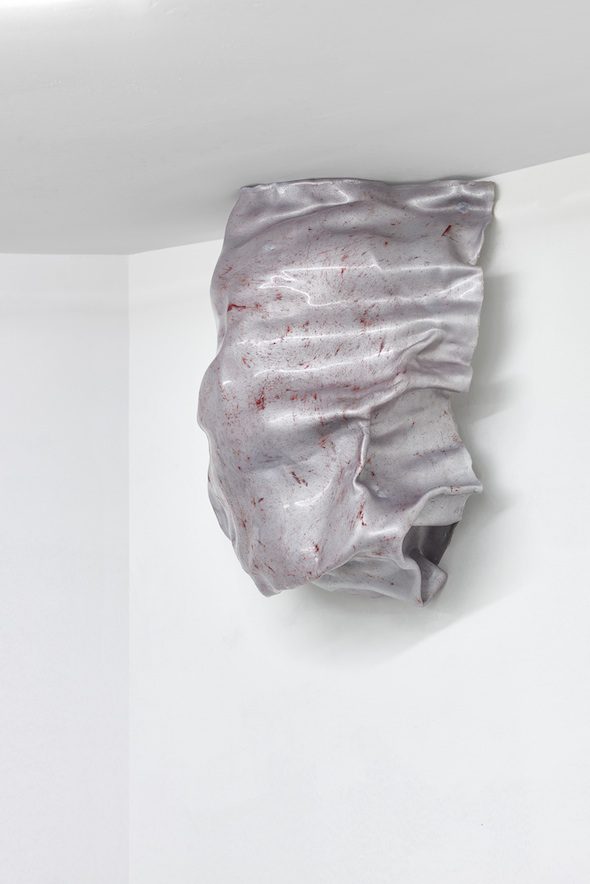 Gender seems to be an eerie force within the exhibition: Nina Canell’s ‘Shedding Sheaths’ plays with the duality of nature as tech. She meticulously removed the skin from Fibre optic cables, leaving a snake-like moulting that plays with the mysticism of the snake as an object: a stealthy, deadly and now reborn entity that’s nowhere to be seen. The tech-ecology we live in today starts to mirror the snake’s cycles, it sheds its skin and slips away leaving us with the matter, but not the heart, of the device. 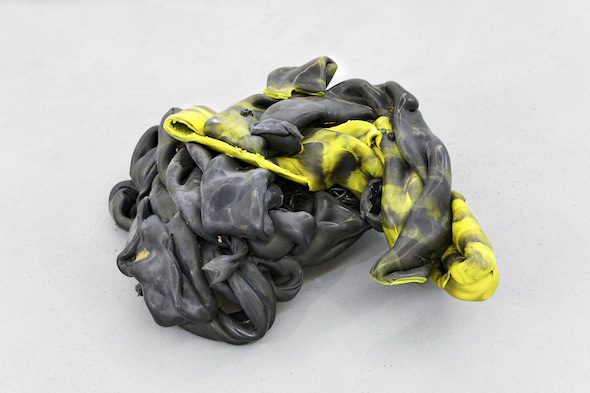 Tech-ecology is now so ingrained into the way we see the world, we cannot have nature without the digital. For example, researchers have just declared the ozone layer is “healing” itself: it’s around 4 million square kilometres smaller than it was in the year 2000, an area roughly the size of India. Naturally, the world is a vast eco-machine but without machines we would have no planetary scale to understand the world. It’s a Catch-22 situation, just like the baby dolphin: we try to valorise our ecology through the digital so we can hold on to it but in doing so we kill the very nature of our conquest. We must learn to live in our newfound paradise, without a natural ecology.