The representation of memory through nature is a central theme in the delicately crafted and carefully considered works of contemporary American-born, Israeli artist Dana Yoeli. Currently living and working in Tel Aviv, Yoeli’s diverse artistic practice spans a wide range of media, including drawings, sculpture, large-scale installations and photography. In her photographic series ‘Fichte/Ashuchit’, Yoeli displays a number of ornate floral wreaths that serve as tangible representations of her Jewish grandfather’s personal memories of his childhood and adolescence in pre-war Germany. Inspired by the memories that Yoeli’s grandfather recounted about his early years in the village of Bayreuth during the 1920s and early 1930s, the ‘Fichte/Ashuchit’ series utilises photography to transform ephemeral memories into a tangible reality. 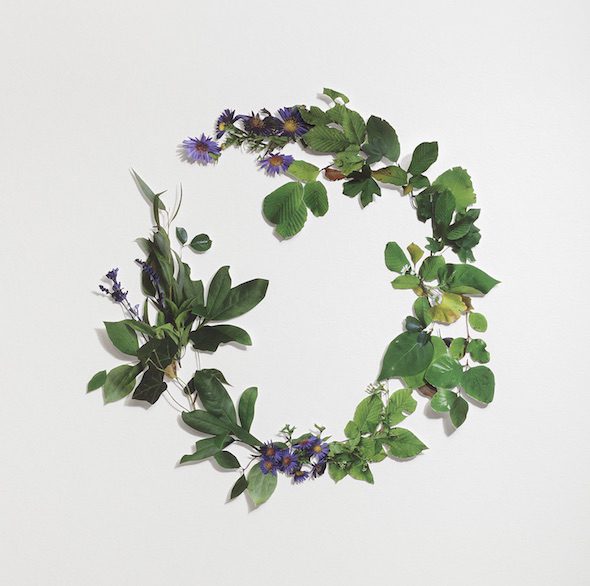 Upon returning to the studio, Yoeli carefully photographed the collected flowers and foliage before cutting the forms from the printed pages and arranging them into ornate site-specific wreaths. The resulting two-dimensional wreaths were in turn photographed to produce the final image. Through her artwork Yoeli creates a tunnel through time and space to connect with the child and adolescent versions of her grandfather, symbolically utilising the natural elements at the sites of memory to bridge the gap between past and present. While the flowers and foliage gathered by Yoeli are ultimately ephemeral and fleeting, the processes she uses in the creation of her works render both the plants and the intangible memories they represent eternal and everlasting.

I spoke to Dana Yoeli about the ideas and concepts behind the ‘Fichte/Ashuchit’ series, which is currently on display at Berlin-based Israeli arts initiative Circle1. 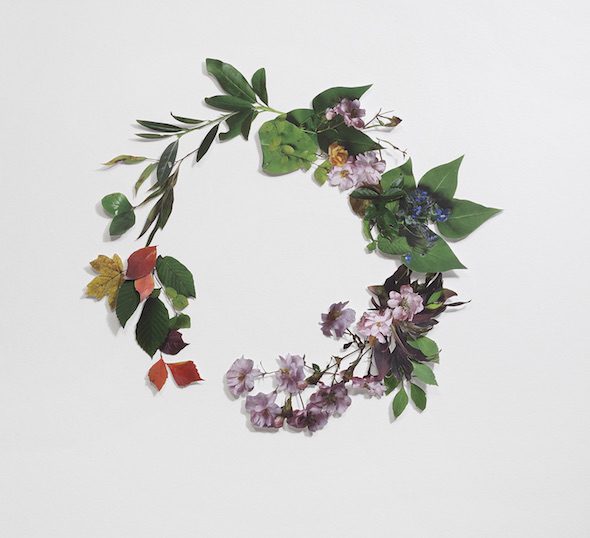 Caitlin Eyre: What significance does the title ‘Ashuchit/Fichte’ lend to the series?

Dana Yoeli: The title was born when I started planning the work. I knew that I wanted it to reflect a longing, a gap between the familiar and the unknown or the imagined, which sort of echoes the experience I have with my grandfather’s stories of the place that he left. I was looking for a title which in Hebrew would be unfamiliar, almost fairytale-like, but in German would be a very daily, mundane word. Since the Fichte (spruce) tree doesn’t grow in Israel, the Hebrew word for it (pronounced “Ashuchit”) is not commonly used or familiar. It was unknown to me before imagining this project. 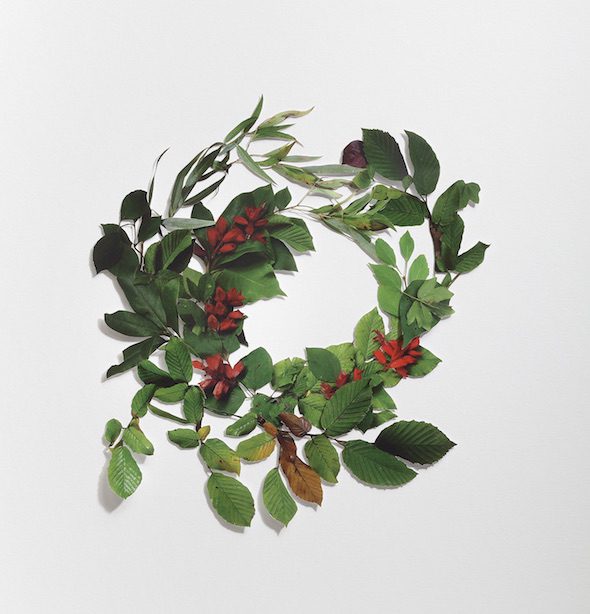 CE: Why was it important to document the ‘mundane’ locations mentioned in your grandfather’s memoirs? Do mundane experiences hold particular significance in comparison to special experiences?

DY: We all know the story just beneath the surface. A boy of 16 separates from his mother and brothers, his hometown (the only town he was ever in) and leaves forever. This boy is Jewish, the place is Bayreuth and the year 1936. This is the significant story of course, but it is so impossible to handle, so tragic, and also only one of countless similar stories. When I read my grandfather’s memoirs I was astonished to find that, even after more than seventy years since his last day in his hometown, his memories were vivid and positive. This discovery is what motivated this work. I wanted to explore what makes a memory significant,  what the line between memory and commemoration is, and what forms the gap between memory and nostalgia.

To do this I tried to use the structured stories my grandfather told about his childhood: how he used to help a blinded war-veteran in return for candy; how he cut his forearm on his skate blade when they were skating on the lake; how and with whom he fell in love for the first time; where he played chess with a classmate, but both were too poor to afford a chess set so they would play in their heads and memorize their moves. All these intimate, mundane anecdotes, which happened in specific locations, portrayed a touching image of my grandfather’s childhood and adolescence. These stories are sharply painful when we, like an all-knowing narrator in a novel, understand what happens to its protagonist ahead of time. In my work I try to focus on a specific experience and elevate it to shed light on the communal story. Rather than participate in the ethos of collective memory, which can be, and often is, manipulated and abused as a tool of the educational system or in the service of a political goal, I chose to reject the dominating narrative of a national ethos and tell the singular story. 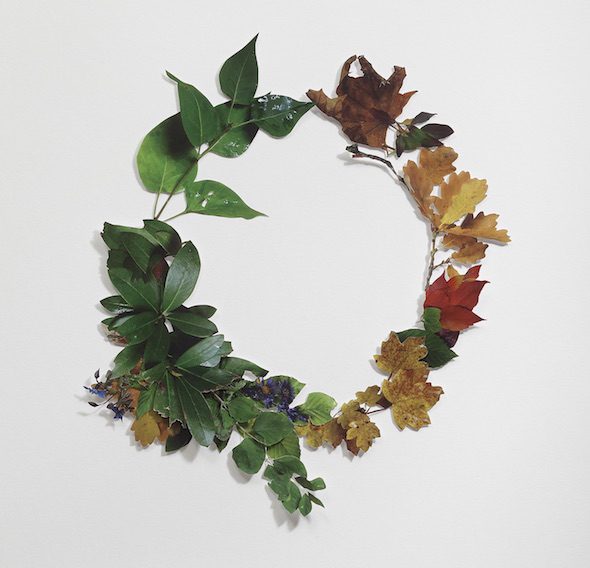 CE: Why did you choose flowers to represent these specific places? Do you attribute particular meanings or symbolism to the different species of flowers used?

DY:  Despite the structured appearance and the stylizing of the wreaths, the work was unplanned in the respect that I had no idea what I would find. I had never been to Bayreuth and had no idea what it would be like. When I was planning the work and the routes, I knew I wanted to do a specific performative act, to collect fresh flowers in specific locations and to photograph those flowers as they are. The action was meant to be layered so that while it was an act of memory, a personal commemoration similar to press-dried flowers tucked between the pages of a beloved book, it was also an intrusive action—a small sabotage—in the public sphere. I knew I wanted to use flowers that grew in thirteen specific locations which my grandfather described, but some were in private houses, others in parks or castles. One was even turned into a parking lot. But this was the magical thing: I was able to find such a variety of flora in all these mundane, overlooked places. 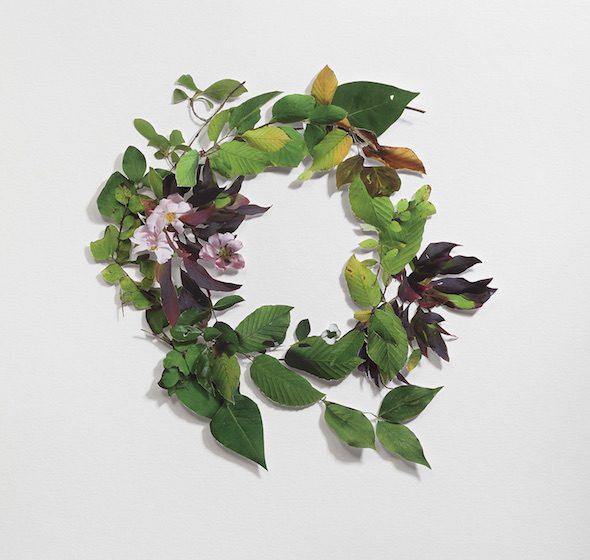 CE: The wreath is an important element in this series. Why are the flowers arranged into wreaths? Does this shape or the function of wreaths have particular significance?

DY:  Absolutely. Flower wreaths are an interesting example of the reincarnation of a symbol. Originally, in Greek and Roman tradition, bay wreaths adorned the heads of triumphant soldiers returning from battle. The image evolved into a European tradition of nature ceremonies, which are mostly found in eastern European and Scandinavian cultures. This tradition emerged in Israeli culture when in the 1940s members of the Gan Shmuel Kibbutz wanted to lead a Shavuot celebration with similar attributes to European festivities. Flower and wheat wreaths adorned the heads of kibbutz girls in a ceremony that involved wagons of hay produce. Over time, flower wreaths became a significant form for expressing commemoration and grief, mostly on the graves of fallen soldiers. They are almost always a part of military memorial services. This connects a national ethos with nature in a hermetic bond, which I find fascinating. 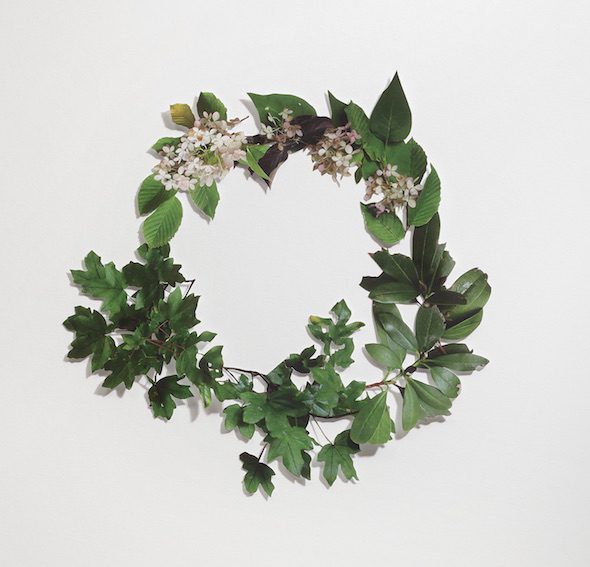 CE: In several instances in the series, flowers are utilized to represent manmade forms and structures. How do you reconcile these opposing concepts?

DY: The way I see it, art is a means to interpret a reality or a manifestation. As artists we use aspects of representation as prisms through which we can examine something from a new perspective. I wanted the static, even sculptural presence of these structures and places—tobacco factory, house, grave, lake, etc—to become charged with the ephemeral material of the flowers and their paper representation. The flowers are related to a place in time: they are processed when still wet from the morning rain, some beginning to rot in certain areas. They are an ultimate expression of the moment, but they are formed into objects that reflect on eternal life, embalmment and taxidermy. With this dichotomy between the passing moment and eternal life I try to question the limits of personal and public memory and commemoration.