From August 1 to 31, 2016, the third annual Project Space Festival Berlin will present a diverse program of experimental exhibitions, performances, installations, book launches and other events. Each of the 31 participating project spaces will open and present to the public within a 24-hour period, with one event taking place each day of the month. Leading visitors to a variety of innovative locations throughout the city—including converted spaces and hidden sites—the festival will illuminate Berlin’s vibrant independent art scene and generate further opportunities for the development of new directions and discourses.

Directed by Heiko Pfreundt and Marie-José Ourtilane, the 2016 festival will also open its own forum, as the literal center for Berlin-based project spaces. The site—The Center of Minimum Distance—has been selected by calculation of the center point between all Berlin project spaces that applied to participate in the festival this year. The physical location, which will remain as found, is to be complemented by a virtual site that lays the groundwork for further development and exploration. In the form of a blog by the same name as the geographic location, the digital platform will generate a series of articles and interviews discussing the roles and interactions of project spaces within public, urban space, and in relation to the mainstream and other structures, both physical and conceptual. To kick off the festival, a vernissage will be held at the forum’s physical location in Mitte on Sunday, July 31st. 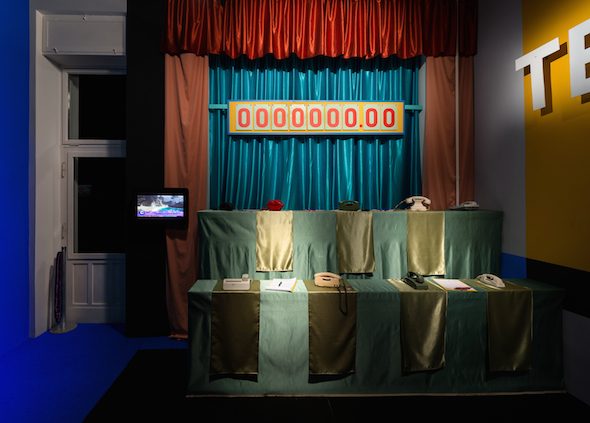 The festival program will begin at Apartment Project on August 1st, with ‘Who Knows Where We Are’—conceived as a discussion and reflection following a month-long experiment in communal living. Other events will include a participatory geological survey of Berlin’s forgotten histories, lead by artist Alex Head and presented by Neue Berliner Räume; as well as the theatrical premiere of collaborative Gesamtkunstwerk CONGLOMERATE TV‘s second block of original television programming.

In addition to the Berlin-based lineup of selected project spaces, this year the festival has extended its scope beyond the city, encompassing four interregional project spaces: Bruch & Dallas (Cologne), Tokonoma (Kassel), Comedy Club (nomadic) and Galerie BRD (nomadic). Opening up broader perspectives on the project space format, the diversity of sites—both established and unanchored—facilitates further consideration of such spaces in connection to place.