In May of last year, Belgian artist Lodewijk Heylen opened his large-scale public artwork ‘Concrete Evidence: 1m’ in Hans-Baluschek-Park near Berlin-Südkreuz. The park, situated next to the Natur-Park Schöneberger Südgelände, is a main thoroughfare for cyclists and runs parallel to the A100 highway circumscribing most of west Berlin. 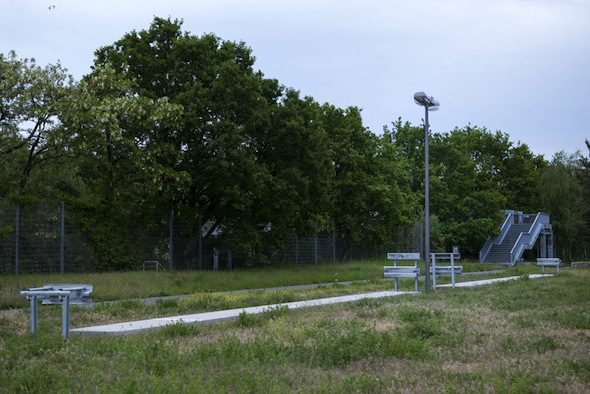 The public space intervention is a 1:1 scale replica of a fully regulated highway, built at only 1m in length. ‘Concrete Evidence: 1m’ is a material study of the standardization of German autobahns, spanning 36 metres in width, with two directions of three lanes each. The artist, whose practice investigates various post-industrial sites and the influence of technology and urban normalization, describes the intervention as a meditation on the nature of travel, as well. Highways are rarely considered in their materiality, but rather viewed as a means to an end: the road is less important than the destination. By highlighting the mechanisms of the highway, in the middle of this urban natural setting, Heylen did not seek to educate passersby about highway construction, but to prompt inquiry into our built environment and the unseen or overlooked aspects of city infrastructure.

A big part of the work’s creation also concerned the process of securing rights to the space from local authorities. Rather than seeing this as an onerous task, Heylen and curator Frederiek Weda relished the bureaucratic aspects of the project—which took over two years to negotiate—as crucial elements in their artistic research. Ultimately, ‘Concrete Evidence: 1m’ was completed in collaboration with several local bodies, including Acta, non verba – Straßenbau Berlin, Grün Berlin, Dipl.-Ing. Jürgen Möller, VTO Verkehrstechnik GmbH and the department Arts, Culture, Museums in Tempelhof-Schöneberg and with support from the Flemish government. 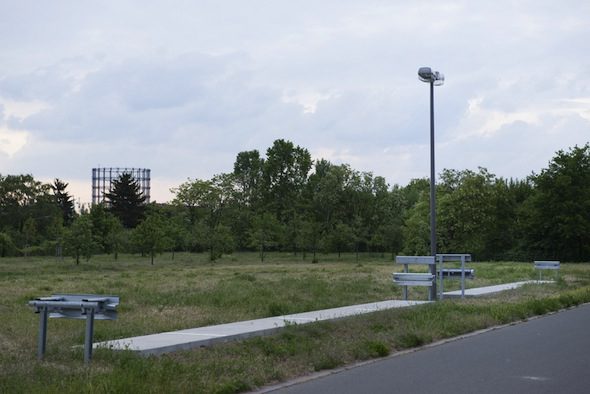 The project in Berlin is part of a trans-European network of standardized highways, with another manifestation constructed at the Verbeke Foundation in Kemzeke in 2012, according to Belgian standards. A crucial part of the project, and Heylen’s practice in general, involves working with local experts in the given field. For the Berlin edition, Heylen worked with road building specialists, who sourced materials used in the construction of standard highways across Germany. In this sense, ‘Concrete Evidence:1m’ also served as a kind of residency for the artist himself, who learned about both the official pathways for public art installation and the intricacies of road construction.

While the piece remains standing in Hans-Baluschek-Park, its future is uncertain. Overgrown with weeds and spray painted in some spots, ‘Concrete Evidence: 1m’ is becoming one with the local fabric of the park, and the artist is pleased with this turn of events. The park itself was reconstructed in its current location when the city opened the adjacent A100 highway, so the presence of this artist-made piece of highway in the park marks a historical symmetry, accentuating processes of urban change.