“The often arbitrary line between art/life has turned into an erasure of that line entirely. Without a robust sense of ‘life’ as something other than art, the terms collapse into one another and we are left with an all-performance-all-the time reality,” writes feminist scholar Peggy Phelan.

I’d done research into his sculptures and surreal post-internet pieces before I’d met him, but going off of the intellectual and nostalgic facets of his work—in tandem with my quickly made presumptions towards the primeval sound of his name—meant that I was expecting a drier experience to present itself when I went to meet the artist Yves Scherer. I’d been invited to get an introduction outside of a gym one evening, as he and his collaborator Grear Patterson’s three-chapter and -city show ‘East of Eden’ had just drawn to a close earlier in the month at Galerie Guido W. Baudach in Berlin. Variations of the artists’ reflections on roaming the world together through photograph, film, installation and storytelling are also being shown in Brussels and Amsterdam. 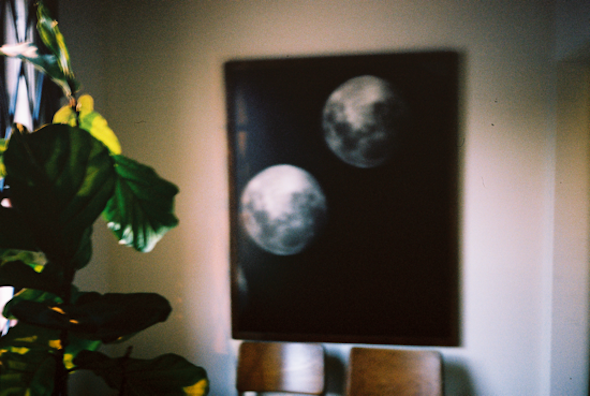 The meeting location turned out to be a ritzy members-only club unfitting in its unostentatious Berlin setting. The elevator ride to the rooftop restaurant seemed to transport me and the young, humming, underdressed artist beyond preconception and into an unsettling atmosphere which looked to be a better host to a slick Don Draper type. What followed was the verbalization of a thought process and repertoire of past experiences so rich, bizarre and honest, that although his words were blushing with sincerity, their authenticity seemed to be in question. I don’t mean to suggest that they were fictitious—devoid of truth—but perhaps at times fictional, when reality is deeper steeped in honesty than fact.

Between an overarching affect of freedom, rebellion and connection to altered states of conscious experience, through art and substance, many parallels could be drawn between Yves Scherer and the Beat Generation. Perhaps in all interviews, exhibitions, and interactions there is an element of performance and role-taking which enhances empathy as opposed to belying it, taking away people’s right to judge and instead beckoning them to experience. Cue the waiter, menus in hand. 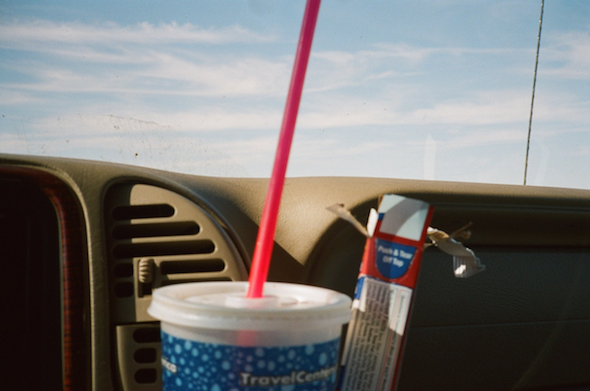 Alice Bardos: When did you decide you wanted to become an artist?

Yves Scherer: I don’t actually know if I know. Almost when I moved to Berlin. Before I came, I wanted to become a writer. I was studying literature. When I moved to Berlin for an exchange, I really liked it here and I started writing a bit more, then I chose to stay here. After a year, I got really bored of writing.

I got bored of sitting at the computer all day, everyday. In my own room alone, it was really fucking lonely. Then I decided that I was just going to start making sculptures.

AB: What did you write about?

YS: More like short stories. I applied for a creative writing program, and I went to the interview and they asked me if there was another subject that I was interested in, other than violence. I didn’t think that was a large part of my life, but there must have been something in there. Maybe that’s what I wrote about.

Now I do write my own press releases. I also used to write the press releases as a text piece, more like a letter. Recently, I sort of stopped reading, and if you don’t really read anymore you can’t really write anymore.

Self-reflexivity is a little over-estimated. I really try not to think about myself at all. I really feel it’s something which stops me and makes me feel bad about myself. 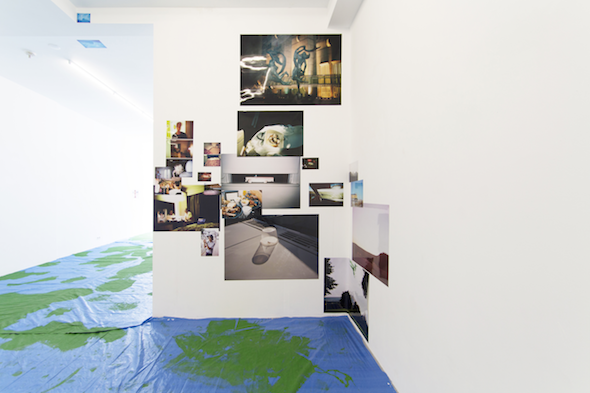 AB: That reminds me a little of Samuel Coleridge’s ‘Confessions of an English Opium Eater’—sad and kind of neurotic. What do you think?

YS: Yeah, but I think there’s a difference between addiction and taking opium, that’s not the same story. Like if I drink a glass of wine now, it’s totally different than being an alcoholic. If I drink a glass of wine now, it’s not going to be sad. It’s going to be like “wooooo”, you know? So the opium thing is not necessarily going to be sad. In a way, I really kind of like opium so that’s why I’m confused. But I agree the thing that helps you the least in life is sitting in your room and thinking about yourself, it pulls you down and you don’t go anywhere.

I worked for a guy in Berlin, and he always said don’t think and don’t act. It’s about having the action going through you instead of consciously thinking about it. It’s like being in this dream of things and just going with it. 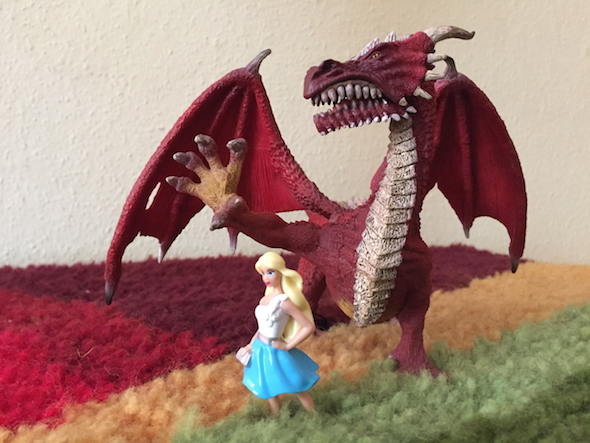 Yves Scherer and Grear Patterson: East of Eden, Tannheim // Courtesy of the Artists

AB: ‘The Sun Also Rises,’ and I tried reading ‘Alone in Berlin,’ but it was too depressing for me. What about you? What books have you recently read?

YS: ‘The Sun Also Rises.’ I think that’s kind of a light read in a way, I like that. I like ‘This Is How you Lose Her’ — I think it’s by Junot Díaz. I lived in the Bronx in New York. He kind of really speaks about people from the Dominican Republic. His stories of girls—they really have a voice in it, I like it. 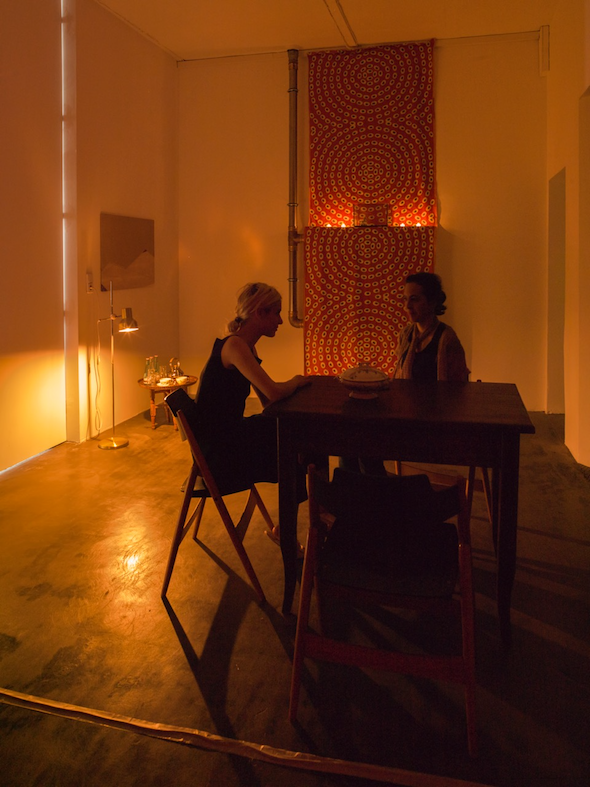 AB: What part of ‘East of Eden’ inspired you?

YS: I never read it, actually. I bought it in China last summer, and read it a little. I watched the movie though. We did four shows which kind of have something to do with the book in a way, but it was more about what the title implies. The two main characters are a little like Grear and me, they started driving from New York to L.A. like we did last year. I don’t even think Grear read it, but maybe they read it in school in the US. 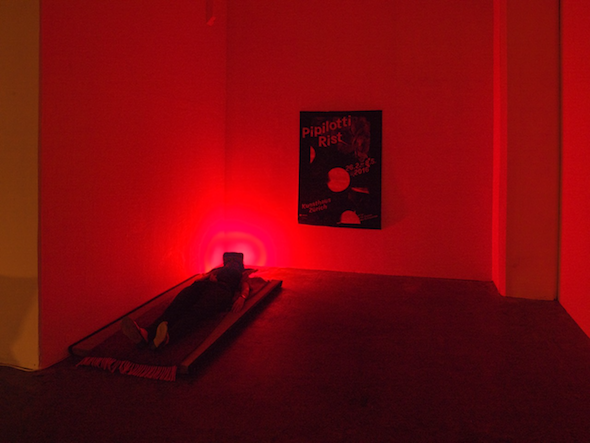 AB: So can you walk me through the exhibition, what was it about?

YS: At first there was a waiting area, sometimes one or two people could go in together. Then you got picked up by a friend of ours, she guides you through the show. For the show in Berlin we wanted to try something else, it’s not what Grear or I usually do. I don’t even know how successful it was. We tried to create an experience. It’s like a re-staging of an experience that Grear and I had in Mexico, in some respects. 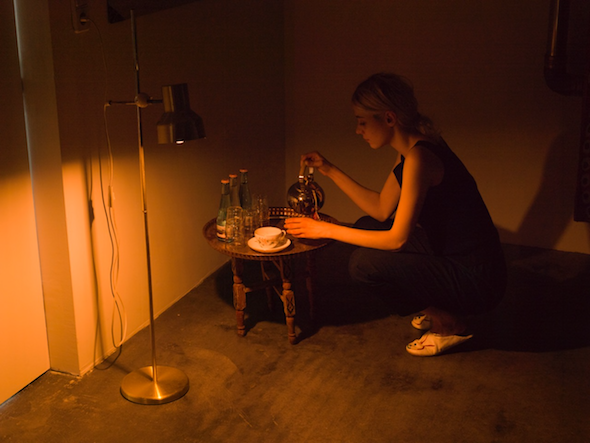 AB: What experience did you have in Mexico with Grear that influenced the exhibition?

YS: It was a DMT trip. There are a few things that refer to the trip. The whole experience is meant to be between things: the guide offers you tea and cookies, and she starts talking like I would talk to you. You’re free to go to the roof with her if you want. You just do whatever, and she does whatever. She does it really well, I have to say. She’s about 21 years old, she makes people feel welcome.

The whole show was an installation with certain elements that reference the house that Grear and I lived in together in the Bronx. It was a homely place with lights, and Grear made a rainbow on the wall. It looks a little bit like an opium dungeon. The things in there are not really art works, they’re kind of more like what you have at home.

The environment is meant to set the mood, to calm you down. It’s meant to evoke a little bit of a catharsis, it’s meant to change you a little bit. Then the guide takes you to a video piece, near some tatami and blankets that I made, which is playing on virtual reality glasses, low-fi ones. It’s not oculus rift. It’s kind of shit. 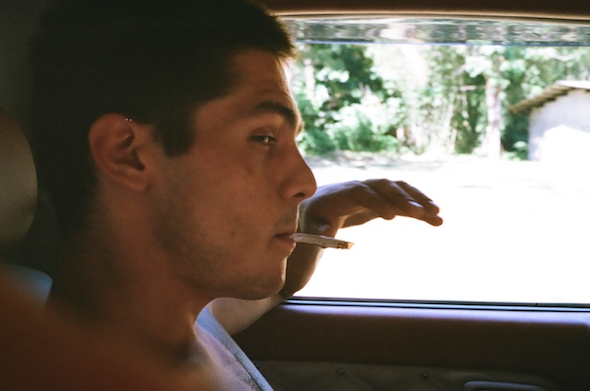 AB: Tell me about the film that you put together for the exhibition and the sources for the piece.

YS: The film [laughs]… wasn’t as good as the room. It was of footage from our trips between New York and L.A. and then Mexico. A lot of the footage is taken while driving. So the video at first is hypnotic, it’s meant to slow you down even more, you just go into a trance. Then it clicks: the ten films of photos from our trips, even from our travels to China and Thailand, and the pictures all kind of come together and flip through really quick, then a beat starts—Kanye West actually—and then it kind of fades and continues and ends in three or four minutes. Then you kind feel like you don’t know if you got it all right. 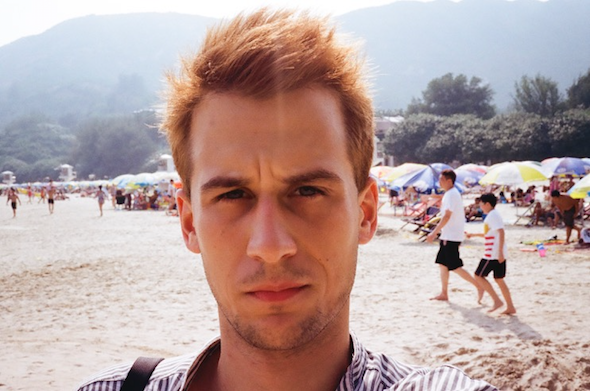 AB: Does the film in ‘East of Eden’ reflect how you feel when you travel?

YS: No, it’s more like a DMT trip. It’s the most important drug experience I’ve had in my life.

I think a movie is a really good way to walk you through something. A movie takes you to a place in two hours, and a book in twenty hours, but it’s more immersive. The challenge was to take you there in the course of a few minutes, because other people were waiting outside. We just tried to make it really intense. The room takes you out of the world, and then the video takes you out of the room. 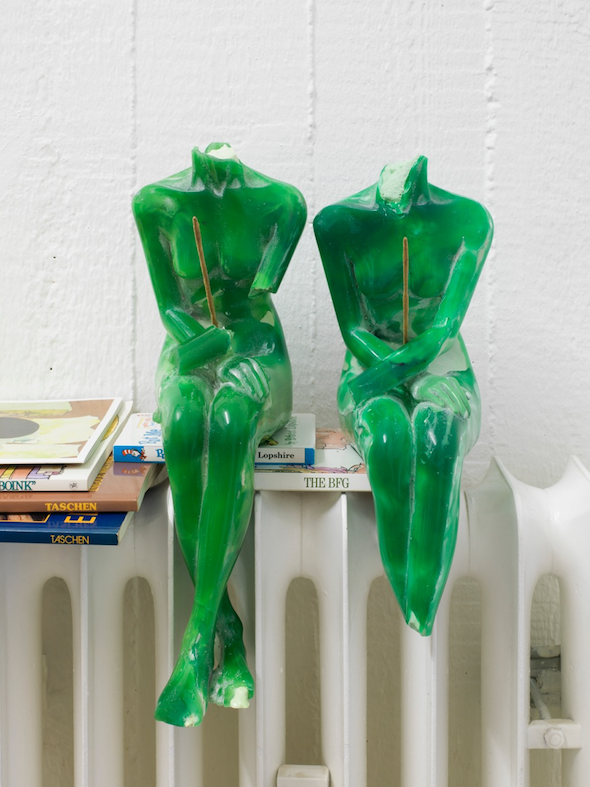