Seeming to effortlessly keep a finger on the pulse of rebellious youth cultures, post-mainstream publications, such as High Snobiety, carry an air of allure and yet somehow give off a sense of falsity. The ideas put forth by artists, including rappers and graffiti writers, might be subversive and cutting-edge but the roots of their work come, historically, from unmentioned hardships, poverty and injustice. Some readers might find themselves unsettled by this appropriation. Multimedia artist Valinia Svoronou’s work seems to enter into the cultural dialogue at precisely this point. 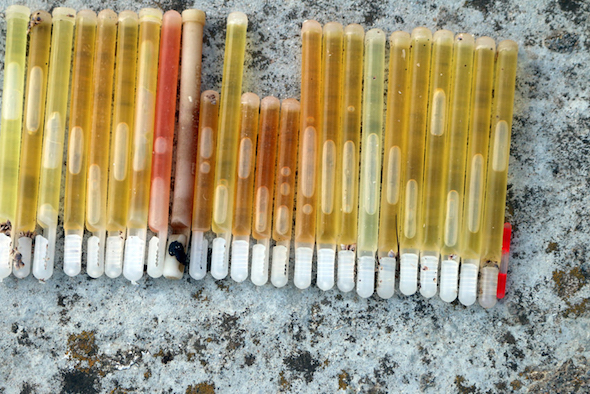 The Athens- and London-based artist’s film clips include potent poetry, which is easily disseminated through not only exhibitions but social media channels, as well. They accompany visuals of rich textures and psychedelic imagery. Often her narratives are alive with political reflection, and yet are lyrical and abstract enough to invite viewers to fill in the blanks and build personal connections. Valinia Svoronou’s topics are specific, including youth club culture, tourism, celebrity self-mutilation or rave settings. Through an artist’s aesthetic choices and works, we get to know not only their subjects but also their character. The works of Svoronou are thus essential political creative alternatives for understanding societal identifications, often of marginalized individuals.

Alice Bardos: Your work plays with many aesthetics and forms of media including digital, electronic, poetry, textual and installations. How did it develop in this direction?

Valinia Svoronou: My work developed from my mostly sculptural background, but after a point I felt that I wanted it to function more like an experience which would include multiple iterations. That requires a specific build up of information and atmosphere. I like thinking of the ways in which something can be presented and how it gets contextualized differently according to the tropes used as a means to present it. 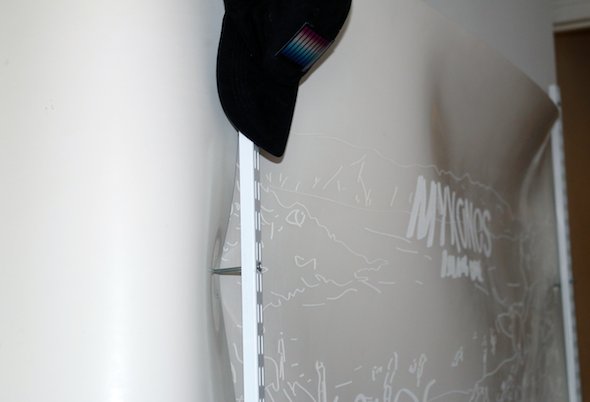 AB: How does the power of each medium affect the developments of narratives and genres?

VS: A specific voice-over tone in a video, a manneristic type of writing, specific formal qualities in a sculpture, all can be categorized within a specific idea of genre. In my work, one could say that different tropes, but also multiple layers of narrative, co-exist like parallel lines building up the project. That is not to create some kind of eclectic sum of references, like a post modern construction, but to actually create a multi-channeled affective experience (like walking in a natural history museum, listening to coil and thinking about the crisis). Every project contains objects from different ‘genres’, and information or rather narrative, usually these are chosen because they bear conceptual similarities, which is my way of subtly guiding the content. But more importantly I like to think of this as an attempt to create possibilities for meaning through transgressing this idea of a normativity of genres and styles.

AB: Much of your work seems to be related to societal problems. What is your standpoint?

VS: For example in ‘The Glow Pt1’, the main aim of the project was querying the architecture of a socially perceived youthful, club-going culture and the way it is portrayed in several circumstances. While exploring the specific location, which took place on a Mediterranean island, from a quite idiosyncratic viewpoint. The main video’s text borrows ideas from an anthropology essay written in the 90s about rave culture in the UK. And the footage accompanying it is appropriated from a promotional video for a club in Mykonos. The rest of the footage is from derelict buildings of a remote island village and a re-imagined CGI landscape that vaguely refers to an island landscape. As a result the video looks something like a sort of post apocalyptic advertisement fluctuating from club scenes, with intense music and didactic subtitles to derelict spaces. 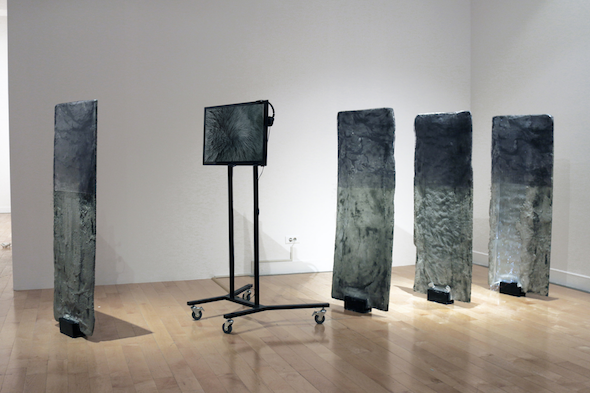 AB: Do you have a favourite piece that you created?

VS: I really enjoyed researching for and making ‘Gravestone Wolves Dark Pools’ which is also my most recent work shown in the Benaki Museum in Athens, as part of a group show called ‘THE EQUILIBRISTS’, co-organised by The Deste Foundation and The New Museum. I felt like with this work I managed to create enough complexity to make it modular, penetrating through a variety of content while maintaining an ambiguous open-ended atmosphere. I tried to avoid it becoming too informative or didactic, although the video did bare documentary information-type elements, but I think that overall the emotional atmosphere of the video and the strict formal qualities of the sculptures made it more about its affective resonance.

This work is composed of concrete sculptures with embedded optic fibres and a video on a screen rack, all placed in a linear consecutive arrangement. I tried to create a sci-fi type narrative that integrated real and fictional information and was enhanced by its physical form. 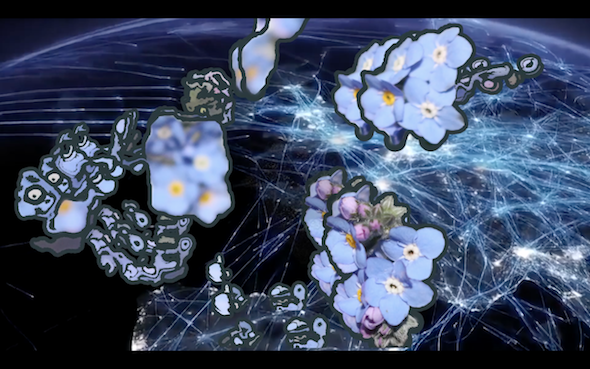 AB: How did you connect with these abstract elements on a personal level?

VS: My entry point for researching this project, which also provided the setting for the video narrative, was the history and different uses throughout time of the site of the WWII Maunsell sea forts, which are massive concrete military constructions in the Thames estuary. This environment was selected as a field of action for the main character of the narrative. The main character is portrayed as a manneristic male character who is struggling to implement his plans through the military forts. The past and the personality of the character are slightly inspired by some events in the career of a real, high-frequency trading strategist (Haim Bodek) and the way the protagonist of the series Mr. Robot is presented, also the voice over slightly plagiarizes Ayn Rand‘s descriptions of her characters.

The video ultimately explores the idea of the conversion of the forts from old war machines into nonhuman trading machines by the over-achieving protagonist, and what it would mean to create such an infrastructure hidden inside an old army defence mechanism as a representation of a changing technological landscape. The exaggeration and mannerisms employed for the build-up of the plot also attempt to deconstruct and question the idea of the male protagonist and the nature of the content itself. 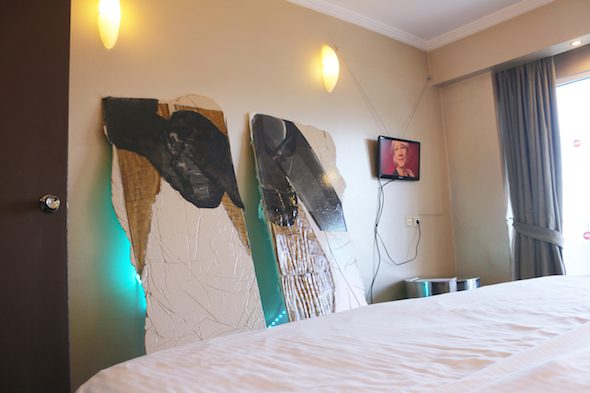 VS: My work has both fictional and real references. I mostly use already existing narratives and information that I find intriguing. Although I usually alter the names of the people and locations involved slightly so that they are not directly recognizable, for them to merge in a more coherent way with the rest of the story and objects. This is a trick usually employed for case studies, which I find interesting in terms of the pseudo-real filter that gives to the real information, in the sense that if someone is aware of the real event I am referring to they can work it out. I also like the idea of challenging real information, in the sense of reality being negotiable in many historical and scientific cases.

I think that a good example of work that manifest this is ‘Ore’, which is a work I developed through reading about the history of the development of human copy wax figures and the history of synthetic diamonds. This project aimed to explore ideas around authenticity and old technological infrastructures but ultimately challenge the binary between fiction and real information. This project was comprised by sculptures, a video and an ePub. At the time I felt a strong affinity towards Edward Jay Epstein’s ideas around political truth, and I drew a lot of information from his book about the invention of synthetical diamonds as a cold war technology. The ePub of this project has five chapters, alternated by two parallel stories, one in the past and one in the present, both in third-person narrative. The one in the past is set in the time of the cold war when the scientific breakthrough of synthetic diamonds occurred, most of the information for this part is taken from Epstein’s research but made into a first-person narrative. 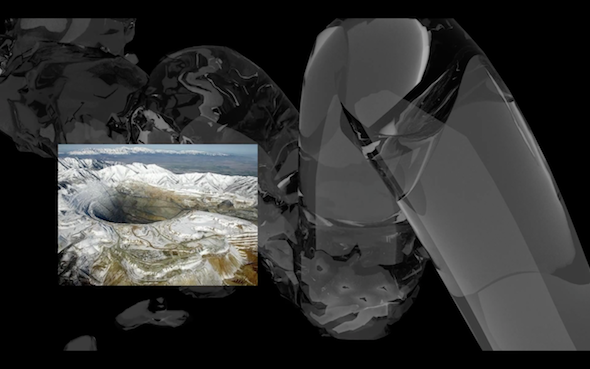 AB: Are there any particularly contentious topics you’ve employed fiction to explore?

VS: All the names of people and places involved are altered and the names of the countries involved are also changed to be made to look like corporation names. The narrative follows the release of synthetic diamonds entering the market as real diamonds, to the point where experts can’t really tell the difference and just go along to not disrupt the fragile diamond market balances. The one in the present is a descriptive walk a character takes in the Madame Tussaud Museum in London, amongst the famous wax models, while also having an internal emotional dialogue. All the graphics for the publication are made according to the references used in both stories and function like illustrations. 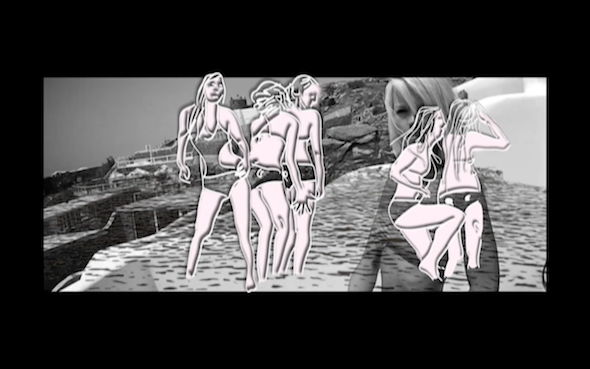 The video for this project fluctuates from scenes of a visit in the Madame Tussaud Museum and intense close-ups of the wax models skins to footage from the Soviet diamond mines. The sculptures are rigid, flat, wrinkled surfaces that were made to resemble slightly human skin, painted in skin tones echoing the skin surface of the wax models and small synthetic diamond roughs. Also, part of their surface had a specific texture and contouring that looked like the diamond mine that is in the narrative. With this project I tried to combine real and fictional information using it as I would use any material in order to approach the content. 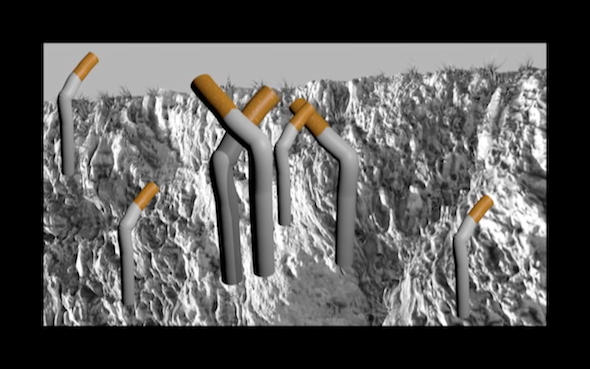 AB: With all of these media coming together, what do you believe your viewers might take from a show of yours?

In ‘The Glow Pt 2, Gravity Regimes’, at Frankfurt am Main, curated by Rachel Walker, I will attempt to build up on its previous chapter The Glow Pt1, and use almost the same materials but manage them and develop them in a different way to shift the view point and intention of the project, something like a remix that becomes a second chapter. I am trying to consider the party crowd as a kind of concentrated mass, as a dynamic object that impacts the island itself, creating its own kind of geography. I borrowed Simone Weil’s paradigm about gravity and grace (made to look scientific in her books through axiomatic formats) as laws that rule one’s psyche as a parallel line, a reference of interest to me, in the sense of using this as a tool to explore the dynamic in the project. In a way, I would like ‘The Glow Pt2’ to function as a suggestive tool for the viewer, towards some kind of alternative interpretation that is both macrocosmic in the sense of the crowd as an object impacting a landscape but also kind of emotional and melancholic.