Pastel-hued breasts, hair etched into painted canvases, stealthy desert snakes and over-sized hands melt seamlessly together. A sex-conjoined animal and human in a lucid dream-like state are some of the characters in Megan Rooney’s ephemeral narratives. She uses mythology and present-day trends such as juicing and mobile apps to build up ever-changing and temporal stories that can be read across her paintings, installations and, most recently, her performance on top of a 3000-meter glacier in the Swiss Alps. 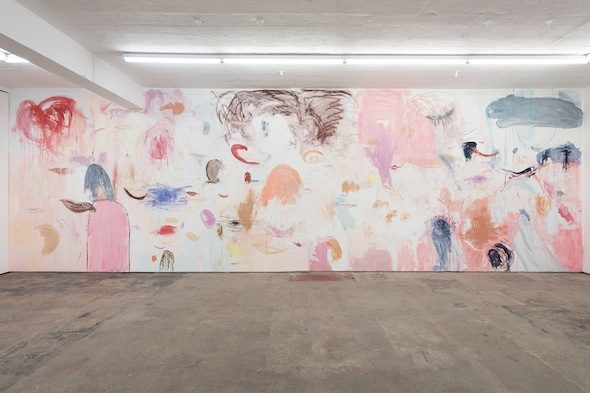 Megan Rooney: ‘Doggy breath, finger deaf, mute, winking. A wink she could only do with the right eye. Basic Instinct, Seventeen’, 2015 // Courtesy of the artist

Penny Rafferty: Your work seems to visualize moments. Larger than life, they take over galleries and project rooms. A narrative always seems deeply entrenched in the work.

Megan Rooney: I explore a sense of time in my compositions but it’s complex and nonlinear, like a written narrative or novel, where multiple moments of time exist simultaneously. You can be with a character in a certain place whilst also listening to their thoughts through their memories or intentions. The compositional space that I explore in my large-scale paintings and murals is in relation to this potential narrative.

Humans have always been interested in narrative. Allowing multiple scenes in a story to be depicted in one composition has a lot of draw for me. The earliest writings we have are from narratives: it’s how we understand the world. I’ve moved around a lot in my life. Narrative in terms of a place/site is also a way to understand a journey.

PR: It seems like a constant theme in the media, that the western world is losing touch with linguistics in place of the image, on and offline. How do you think this affects narrative?

MR: Language is as important and central as it’s ever been.

But there is also now, more than ever, a circulation of narratives from apps to flavoured waters—that want their narratives to meld together with yours seamlessly so you don’t notice that your desire is becoming their product. So narratives can also be coercive, manipulative and seductive. You can see influences of this narrative enter into my work too, because that’s how we experience the world. If you’re walking down the street having an inner monologue, there’s also an advert there: passive, but still there. 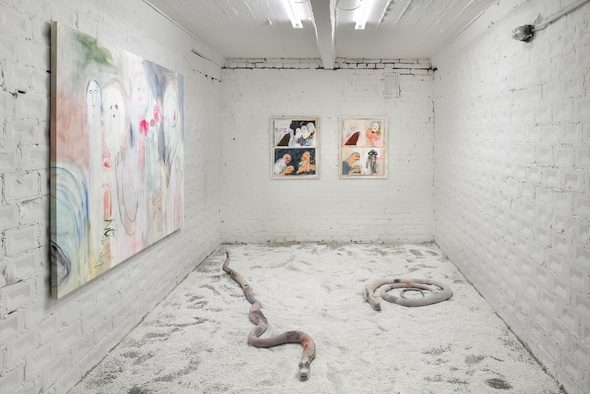 PR: It seems like you use fiction as a critical tool?

MR: Critical yes, but I’m not sure if it’s really a tool. That feels too specific. I’m creating differences and divisions, shades and hues, but not towards any specific goal. It’s more about the articulation of a world. And, of course, in any world there are likes and dislikes, sometimes strong, sometimes passive. That’s what gives it character.

PR: A lot of your titles bring the viewer back to childhood tales and stories, such as ‘Piggy Piggy’ and ‘Animals on the bed’. What’s your intention here?

MR: The titles are not a reference to childhood, per-se. But I find it interesting if somebody reads it that way. I’m interested in a kind of directness and primacy in language. The poetic effect of simple devices like repetition can break up more prosaic lines. There are qualities of rhythm and cadence that are central to children’s books, but they’re also outside of age groups, too.

PR: Naturally one can’t help noticing the sexual references in your work too. Are these alluding to a known myth or your own writing?

MR: I’m writing my own myths, using pieces of mythology that lie around us today, just as mythology has always done. Take the book of Genesis: it’s based on a Babylonian creation myth. That’s part of the power of archetypes. They contain something familiar but they can also be refreshed with new context. Sex and mythology have always been a pair. I’m interested in how this can be reinterpreted in my own lived time.

Megan Rooney: ‘Having sex in a parking lot with the windows open’, Seventeen, 2016 // Photo by Damian Griffiths

PR: The latest work you did in Gstaad, Switzerland looked like an ever-developing lucid dream. Can you tell me a little more about it?

MR: I started thinking about this performance almost a year ago when I was invited to participate in Project1049, at the invitation of my long time friends and collaborators, Raphael Hefti and Paul Kneale, who organised the project for LUMA foundation. The site of the suspension bridge, where the performance took place, became a sort of obsession for me. Visitors must first ascend a glacier of 3000 meters—which takes about twenty minutes—before they can access the bridge. I wanted to give the viewer an experience that stood in contrast to the wild sense of actual nature before their eyes. To draw the viewer inside of themselves. Back into the domestic, into the personal. 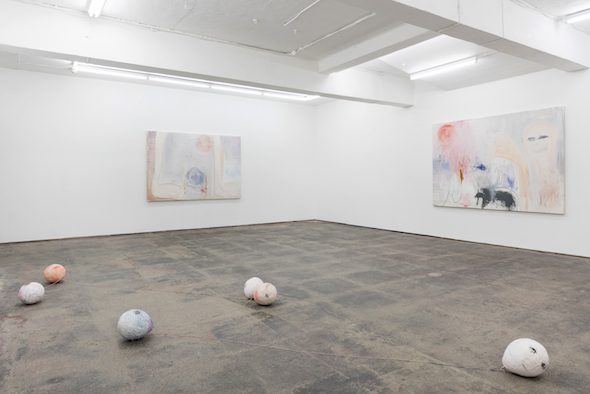 PR: I guess we never leave our lives behind right?

MR: No, we are always carrying our own bag of narratives and we can’t escape that no matter how spectacular: our stories follow us everywhere we go. I feel this most strongly in places that are designed to provide just the opposite experience, like a trip to the alps sold as the chance to experience a sublime moment. The text ‘f on your tongue’ was written specifically for this performance. I worked with London-based choreographer Nefeli Sharmea; together we worked closely with my text to translate the mood and feeling of the words into a dance that was enacted by eight performers. The text was delivered live, projected over the mountains as bodies and elongated puppet arms began to emerge from behind a large rock formation. Alice Evensen worked to transform the imagery from my paintings into a fabric and designed the costumes. I later painted and stained them by hand. The recurring, large puppet arms often found in my murals and paintings became literal extensions, the performers dragging and swaying them across the bridge.

PR: Which fiction really draws you in?

MR: I recently finished ‘Hard-Boiled Wonderland and the End of the World’ by Haruki Murakami. I’ve read almost everything he’s written but this book is particularly strange and special. When I read Murakami, I slip into his world and time totally disappears. I read his books up ladders covering the pages in paint as I work, and in bed late at night. Towards the end of the story I always feel a strange and terrible loss. I’ve never had that experience from another writer.