The iconic essay ‘On the Museum’s Ruins’, written in 1993 by Douglas Crimp, presents his criticism of contemporary art and its institutions and, above all, suggests that the museum has become outmoded and no longer a vital cultural force. Crimp submits that the museum is little more than a decaying establishment, that had served in past centuries as the foundation of art but has since been reduced to rubble. Accordingly, it is logical that museums are looking for new ways of presenting and representing art. 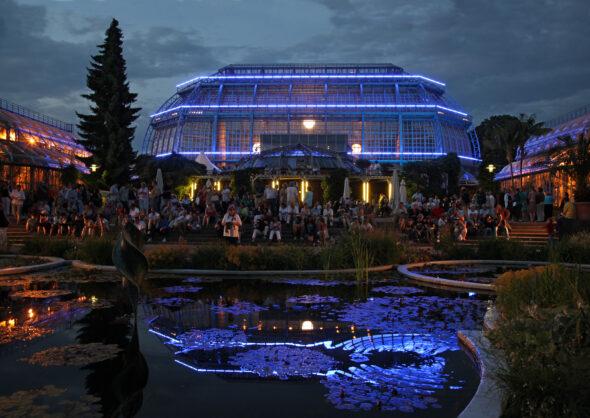 Cecil: “It can get a little spooky at nights so you might want to put a few lights on. The most important thing—don’t let anything in…or out.”.
Larry: “Out?”.
Night at the Museum (2006)

In 1997, a reunified Berlin launched ‘Lange Nacht der Museen’, a large-scale experiment in re-imagining the museum and its place within the city’s cultural fabric. The concept is prevalent throughout Europe, including Nuit Blanche in Paris, La Nit dels Museus in Barelona, Noc Múzeí a Galérií in Bratislava and Museums at Night in London. The events, globally, have succeeded in increasing public engagement with arts and culture; in 2013 Moscow’s ‘Sleepless Museum Night’ attracted over 1.200.000 insomniac Muscovites into its cultural establishments.

Shawn Levy’s American fantasy-comedy film ‘Night at the Museum’, starring Ben Stiller, represents the night as the time ‘everything comes to life’. While in the film this plays out in a literal sense, with the inanimate objects of the New York City’s American Museum of Natural History becoming animated, it offers a more figurative analogy, that the night can present a newfangled perspective through which to engage with the museum.

On an exceptionally balmy Saturday evening, I set out on bicycle across Berlin’s 36th installation of ‘Lange Nacht der Museen’. With over 77 participating museums—from the German Currywurst Museum and Berlin Hemp Museum, to more established institutions Berlinische Galerie and Museum of Decorative Arts—and at times unbearably long queues, navigating through ‘Lange Nacht der Museen’ required an extra degree of patience. Alongside the permanent exhibitions, artistic and musical performances, workshops, pop-up bars and tours took place until early in the morning.

The lobby of the Berlinische Galerie resembled one of Berlin’s many clubs more than the state’s museum for modern art, photography and architecture. At midnight, following pilgrims of museum-goers across Berlin, the quasi-ritualistic experience of visiting the museum as both a ceremonial site and space in which visitors open themselves to a different quality of experience, was seemingly heightened. It is hard not to get swept up in the excitement of what is colloquially known as ‘the night’, yet as Rihanna’s ‘Work’ bellowed into the main hall of Berlinische Galerie for a second time, the illusion was quickly dismantled and it began to feel a little cheap.

‘Lange Nacht der Museen’ might be seen as a continuation of the modern era of the museum, in which institutions are less concerned with presenting art history as a linear process, than they are with finding ways and processes with which to reinvent themselves. As to whether ploys like this will have long-term effects on reawakening the museum, and its viewers, remains to be seen. Yet, perhaps the only evident decay lies within the conceptual framework of the museum, and its purpose: what they do and for whom they do it. The museum itself lives on.