We live in a world where work is often precarious and exploitative. Using Facebook in our free time allows data-mining economies to profit while we sit idly skimming feeds because we are either overworked or out of work. The growing number of start-ups with fitted gyms and meditation rooms allegedly serves to offer workers the best mental capacity to keep producing. Artists have long been working with the status of a freelancer or not-for-profit worker, but with the advent of cognitive, online cultural production this reality has turned into a 24/7, sci-fi nightmare. Claude Eigan explores this narrative within her office installations. Predominantly focusing on start-ups in San Francisco, her work offers a dystopian after-hours of the working world today. We spoke to Eigan about slow-living, universal basic income for all as a way to embrace boredom, and her recent show ‘Comfort Zone’ at L‘espace de l‘espèce in Berlin. 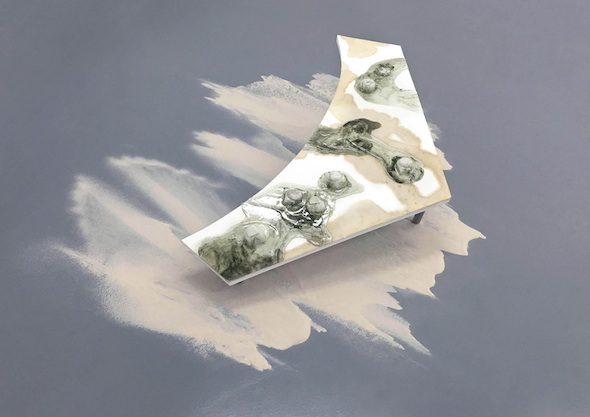 Penny Rafferty: The meeting room seems like a very personal space for you. Is it?

Claude Eigan: It is. It comes from my own personal experience working in a corporate office in San Francisco a few years back. I would often find myself in these claustrophobic conference rooms, with their sterile aesthetics, in which you need to be efficient in a short period of time and not be distracted by the surroundings. The weird thing was that I could hear the sound of the sea coming from outside, a surreal contrast between the Blackberry ring tones and breaking waves.

Back then we had meetings about everything; we even had meetings about how to have good meetings. I don’t remember a thing about what these were about, it probably didn’t really matter. What I remember, however, is the feeling of discomfort and anxiety that came out of it. I kind of felt like an outside spectator looking at something so meaningless that it became absurd. At some point you disconnect with what’s happening in the room and let your brain escape. I guess my work comes from these waking dreams that were going on in my mind at the time.

PR: The poem by Alizee Lenox that accompanied your latest exhibition ‘Comfort Zone’ has lyrics like “I’ll be here when the company calls and seamlessly spit a soft breeze on your bored tongue.” You’re creating a kind of after-hours workplace for the viewer, right?

CE: I like the idea of ‘an after-hours workplace.’ I am generally exploring the topic of work through the specific image of the meeting room and its codes of conduct. I was interested in the contrast between the never-ending need for efficiency that you find in a typical office environment, and the opposite (and more and more popular) concept of slow-living. I’m wondering what would happen here when there is no human presence, no activity anymore. I created this kind of parallel workplace, an in-between world in which time seems distorted. Everything here is slowing down, on hold. 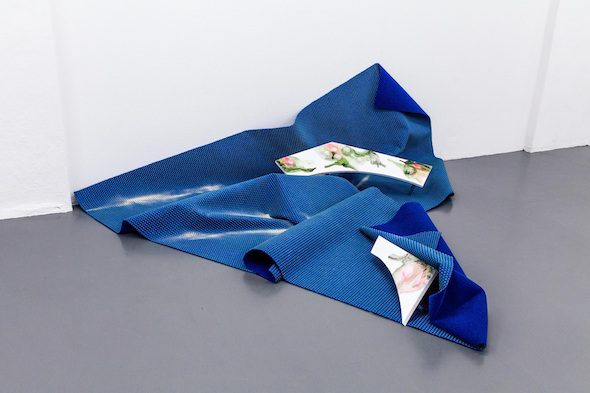 PR: What exactly is slow-living?

CE: In the beginning it was more about slow-food, as opposed to fast-food, stating that to obtain better quality foods, its production process needs to respect the inherent and natural time for a product to grow. Then it became this slow-life philosophy that is basically about taking the time to do things properly, and thereby doing them better and enjoying them more. Which is interesting, but could also be interpreted as a bit retrograde. 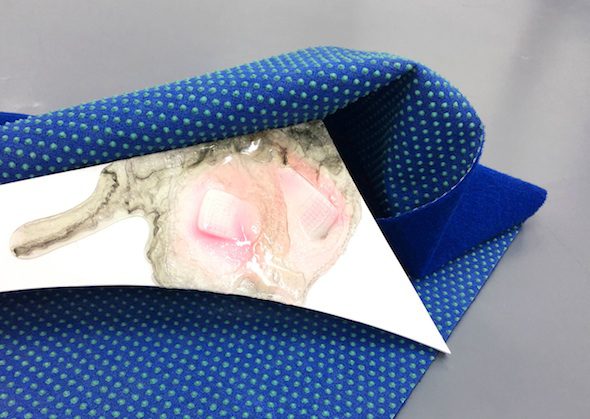 PR: Like the projected loading logo in your work ‘No exit’. Could this be a slow-living narrative?

CE: I often use potential narratives from objects that surround us, and alter their original appearance to create hybrids. The projected logo is a good example of this: the brand tiXon is a fictional one. The logo was designed to imitate a real projector brand (Epson, Canon, etc): the kind of loading screen that you would encounter before the meeting kicks off, waiting for the PowerPoint presentation to start. The only activation of the piece happens when the visitor questions himself about whether or not the projection is working properly. It was interesting to have people coming to me, a little embarrassed, to tell me that there was a problem with the video. 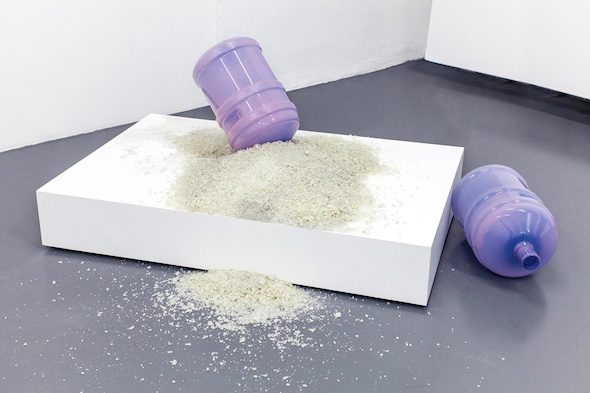 PR: Your use of keywords from these spaces like ‘Work-Life Balance’ shows that you’re a native in these environments. But can you expand on your relationship to this structure, conceptually?

CE: I see this new body of work ‘Comfort Zone’ as an entrance point for a broader reflection on the topics of work, boredom and its relation to artistic practices. Originally, this kind of cliché motto ‘Work-Life Balance’ was about setting clear boundaries between work and free time.

With today’s new technologies, this approach is no longer adequate. Those boundaries tend to become blurred, in a way becoming closer to a more artistic lifestyle where the separation between work and leisure is often not clearly defined. In her book ‘Negative Space: Orbiting Inner and Outer Experience’, author Antonia Hirsch sums up this parallel quite well. 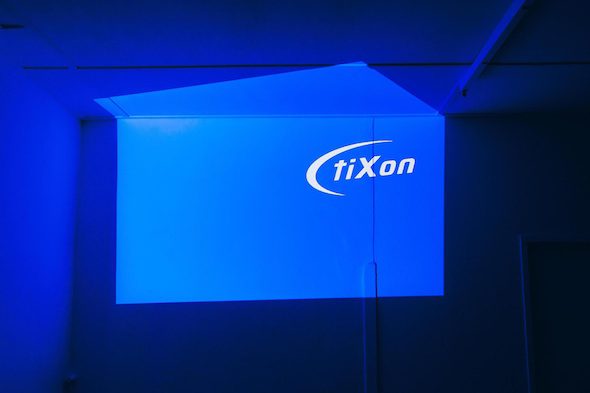 PR: Your work also emits elements of hammy horror and science fiction. One can’t help but think of David Cronenberg’s ‘eXistenZ’ when looking at the garish jellied pads and usable skin devices.

CE: Yes, I have a strange fascination with the notion of chaos, or rather post-chaos: the new territories and aesthetics that it can open are often a starting-point for my work. This is also quite a recurring theme in the sci-fi genre: the apocalypse and the extinction of humans, a world without us. I think ‘Comfort Zone’ reflects this idea a lot. Someone told me that it looks like what would be left of a meeting room after a natural disaster has happened, which I thought was an interesting interpretation. 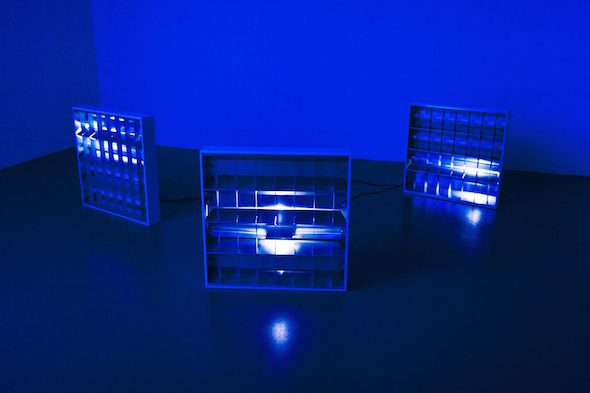 PR: This sci-fi aesthetic maybe hints to a universal income for all, liberating us from waged labour. Is this true?

CE: In a way, yes. Though I think the oppressor is the perpetual glorification of work and being busy, which is considered as the most important value for a person. The workplace itself is just the shell. You have to be busy all the time and, even more importantly, you have to appear busy. This leaves very little space for deeper thoughts, introspection, or boredom. People get so scared of boredom, it’s crazy. I don’t see it as a negative notion, as Lorna Brown said: “the prerequisites for boredom—a suspension of material need, an awareness of self and time to reflect—are also the prerequisites for making art”. Of course boredom can be seen as some kind of luxury now, precisely because of this ‘suspension of material need’ that it requires. But I guess having a global basic income would be a good start to achieve this.