Rachel Maclean‘s signature cute-grotesque aesthetic, rooted in the fairytale genre and a critique of happiness marketing, belies the labor intensive production techniques that facilitate its construction. The candy-coloured fantasy lands of her films are a visually appealing conduit to an exploration of the darker facets of modern culture; born out of a fascination with horror movies, children’s television and the commodification of fear. Ahead of a solo exhibition opening next month at HOME Manchester, we spoke to Rachel about the co-option of childhood by global conglomerates, the infantilization of workers and the construction of the self. 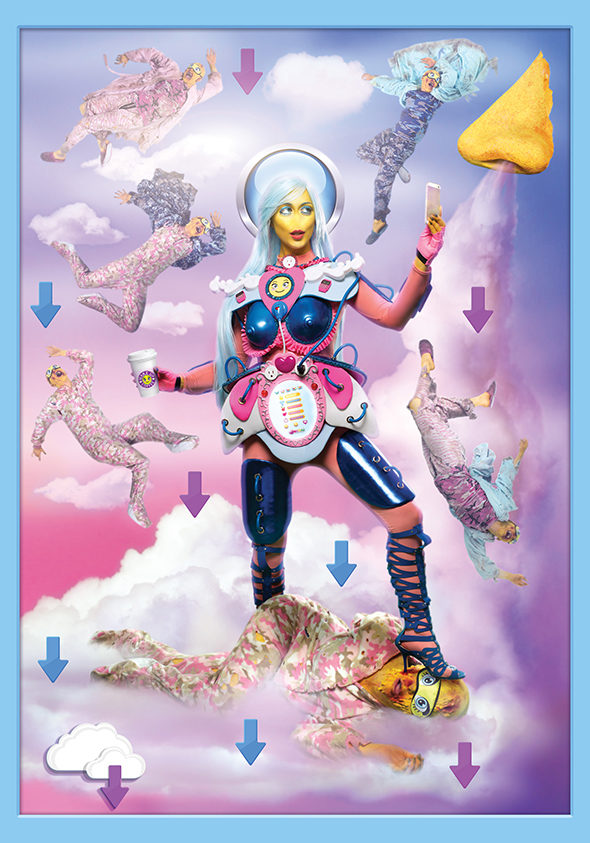 Romily Alice: It’s evident that you have a very strong work ethic in that you write, produce, and perform in all of your video work. How do you find the experience of that kind of labor-intensive style of production?

Rachel Maclean: I’ll go through my process a step at a time: I start out by writing a script and from that point I usually start thinking about costumes and the visual world that the script will be part of. The shoots are another layer of the process, where I’m taking the script and the visual ideas from the costumes and thinking about how that’s going to be set out on screen.

I guess the most time-consuming part is post-production which usually has to happen much quicker than I’d like it to because of deadlines. I take all of the rushes, edit them, and following that I work on putting in the backgrounds, animating and colour grading. That is extremely, almost mind-numbingly time-consuming at points but also kind of fun in that it’s the point at which you have the most control over the final look of the film.

RA: How did you decide to play all of the characters in your films yourself? Was that a convenience factor or is it an intrinsic part of your practice?

RM: It’s an important part of my practice. When I started out at art college that decision came out of an artistic tradition of using yourself or your body in your work and also responding to the history of performance art. I’ve always been interested in costume and transforming identity so I think it was natural that I got into enjoying playing different characters within the film work. I suppose, half-intentionally and half-accidentally, I found that using my own body was an interesting way to work. I quite like it now. The process is very odd, especially filming against green screen because so much of what you’re doing is entirely illusionary, so what you see in the room while you’re filming is very different to what you create afterwards. I enjoy that slightly fragmented process. I like the feeling of the absurdity of all of the characters being me; the paper-thin, almost uncomfortable feeling of needing to believe somebody is an older person but knowing that there’s very obvious prosthetic make-up. I like that sense of everything being an illusion. 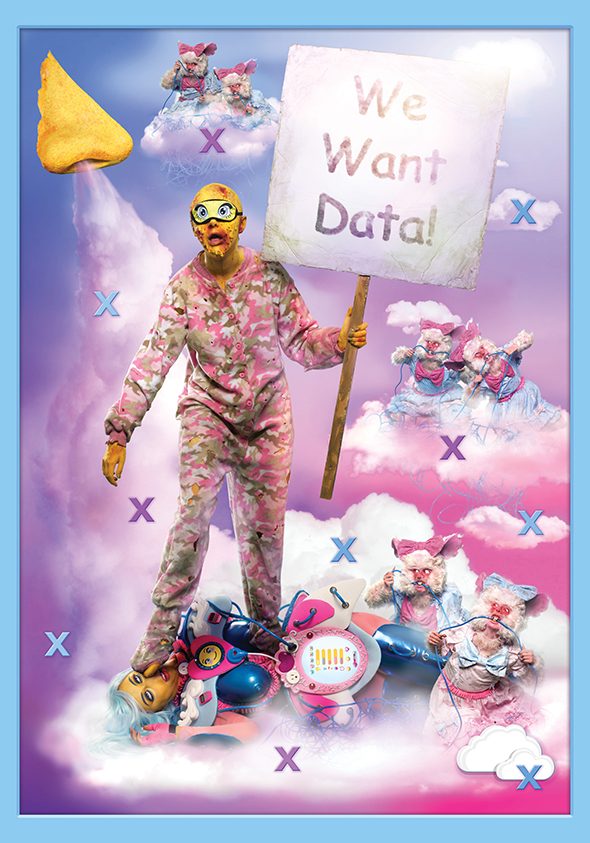 RA: For your upcoming exhibition at HOME Manchester: ‘Wot U :–) About?’ you are producing a new film commission, ‘It’s What’s Inside That Counts’, as well as showing a series of large scale prints and figurative sculptures. What are the thematic links between the work and how do you find you relate differently to working across the various mediums?

Film allows you to tell a narrative in a very different way than a still image. It was interesting to explore what you can do within prints and the still image, the medium creates a slightly more fragmented narrative than the film.

The sculptures are a new thing. I’ve always made props and costumes, physical things that then go into the films but the sculptures are interesting for me in terms of doing a lot of experimenting with different materials and figuring out what would most reflect the world within the film. Running through my work for the past couple of years have been these yellow, noseless emoticon characters—on one hand cutesy, on the other slightly obscene. At the moment I’m making them out of foam and jesmonite, so they’re these plastic fiberglass cartoons but there’s something a little grubby about them. I’ve enjoyed the feeling of working with sculpture; having ideas through that process and feeding those back into the film.

RA: Your work is rooted in fantasy but the links between your imaginary worlds and the current concerns of Post-Internet culture are very real. Do you see the world your work is set in as a vision of a potential hyper-future?

RM: In lots of examples of my work I want it to be something that is specific to the context of either the site where it’s shown or the cultural context of the time when it’s shown. I don’t think of it literally in the sense of me creating a future world but I quite like the feeling of referencing ideas of futures or in some works the ideas of histories as well. So it becomes a combination of some ideas of now and some ideas of how we imagine our past.

The work ‘The Lion and The Unicorn’ that I produced in 2012 was specific to the context of the time in that it was made following the landslide victory of the Scottish National Party and the Scottish referendum. It was also shot in a historic house in Scotland and I wanted it to relate to the wider idea of the union of Scotland and England, so I was playing with ideas of imagined futures and also a past or a history and how to interpret that and romanticize it.

The work at HOME is less specific to place and a cultural moment but it certainly responds to cultures of the internet and an idea of identity and self that is generated through the way that we interact with the internet and construct and edit our sense of self through that. So to a certain extent the work is a present but also a heightened possible future. 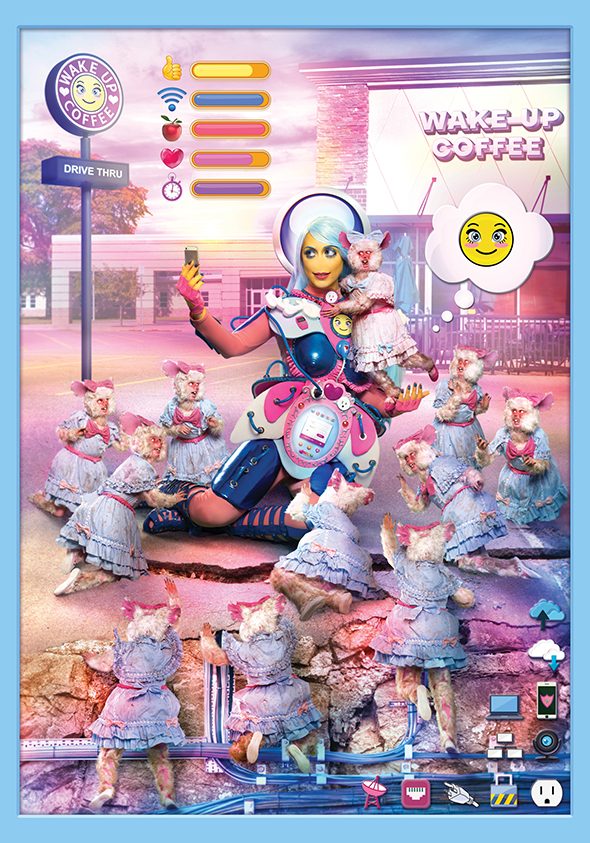 RA: Much of the digital symbolic language of emojis and abbreviations is closely tied to the symbolism of childhood. The fairytale genre that you utilize in your work seems to suggest a questioning of the ethics of this kind of appropriation, do you see this overlap and repurposing of childhood as a negative?

RM: I think it’s interesting, that infantilizing thing of adults being attracted to the signifiers of childhood. I got quite into looking at things like the big trend for adult onesies that was happening for a while, where everyone was wearing these baby onesies and it was all about snuggle-gear. I’m interested in the way that companies like Google have offices that are like crèches; they soften their international image by referencing childhood with this infantilizing idea that work can be play and work should be play, blurring the boundaries between your home life and your work life.

I look a lot at childhood, maybe not the reality of childhood but the ways in which childhood is a construct that for the adult world functions as a mini-utopia. I particularly look at a lot of children’s and pre-school television: the Night-Garden, Teletubbies genre where its all about manicured worlds that are completely clean from all of the things we imagine are corrupt within adulthood. There’s this imaginary idea that children are and should be distinct from adults. I’m interested in how the idea of children being a distinct and closed-off thing also determines their treatment within the horror genre; the idea of children having this horrific otherness that allows them to be able to connect with things that we as adults don’t understand and can’t access, like the paranormal, ghosts etc. This isn’t the reality of children or childhood but illustrates the way that we’ve come to imagine those things.

RA: Your sculptural figures that will be shown at HOME are said to resemble hybrids of bored commuters who are positioned as inanimate viewers for a series of infographic videos. Is this a comment on contemporary work culture?

RM: I guess to an extent it is. There’s a feeling of everything being mediated. The sculptures all have screens within them, so there’s always a world beyond the physical thing that’s in the room. In the film work there’s this idea of information transfer and data. There’s maybe more of a sense of the absence of work: an emptiness or unemployment, a lack of activity rather than a world of work. It’s more of a dystopia of a fallen economy that seems to be trying to resuscitate itself through advertising, rather than it being a world of work or commuters. 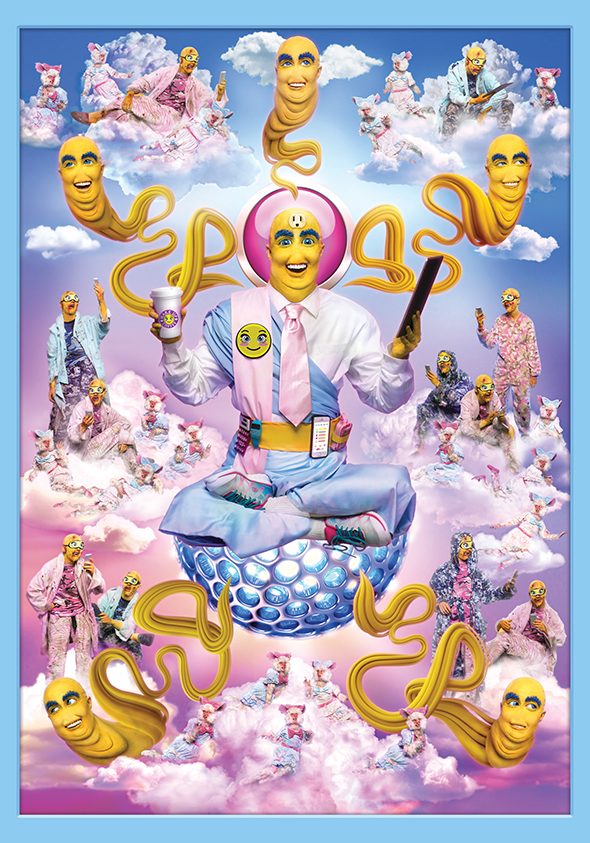 Romily Alice is an artist and freelance writer from London.