The only thing that can’t be sold is a gift. Once those glass angel figurines from last Christmas go up on eBay (and you squeeze some free money from them for a holiday blunt), those totems return to the rising sea of commerce. For one buoyant moment they had no cost aside from the time it takes to unwrap something and say “thank you”, like you’re speaking to a bear who can tell when you’re lying. After this, the poor heralds are fed back into some deft machination of capitalism’s roundabout: as products. 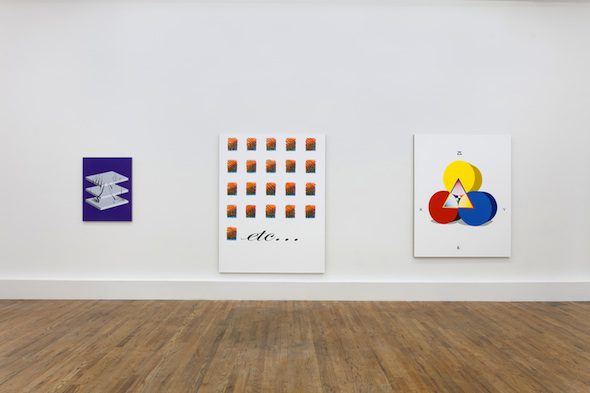 Acting as a fulcrum to artist Adam Henry’s show ‘Handshakes and Networks’, on view at 247365, are three aluminum cases containing canvases awaiting an experiment. Cradled in foam, white handling gloves included, each canvas depicts a diagram: one central equilateral triangle of gradating color, points capped off with circles, and a label of coordinates, X,Y,& Z beneath. As Henry notes, “These paintings aren’t static, the artist doesn’t have ownership over it anymore. In fact, no one does.” The directions are for these paintings to be given away repeatedly after a short stint with a lineage of recipients. Subsequent moves from the gallery and beyond will be relayed back to Henry, who will keep tabs in a grand travel ledger. Unlike some tchotchkes born from the forge with a price tag, these slick nomads have entered the market without any position in its hierarchy. No collector could boast of the worth someone imbued these paintings with at auction, but there will be an accelerated provenance to savor.

Adam Henry’s giftable works are created with the same attention to detail shown alongside his works crafted for sale. Here, a spectrum of interaction with artistic labor may be explored. In 1550, Georgio Vasari published in-depth relationships with Renaissance patrons. At this time it was believed these characters entered larger markets to obtain wealth as a gift to be doled out to the gifted. His ‘Lives of Artists’ is like the OG Janson ‘History of Shaking Hands’. The other branch of our burgeoning contemporary market has its roots in the cultivation of Dutch auctions of the 1630s, predating the stylistic shift that Sotheby’s and Christie’s use today. Alpha consumers now have centuries of primary and secondary sales trends to base artistic excellence on, while sitting at the reins of a finely-tuned prediction market for emerging talent. Slowly, these performances are perfected to maintain a mercurial system, though none of them have any algorithm to run when artists decide to give their paintings away. 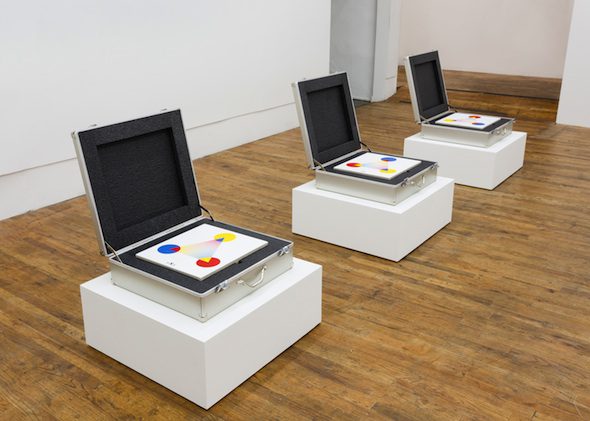 With all of this framework set to shuttle works of genius to climate-controlled institutions, it is easy to overlook how tenuous the engine is that keeps these transactions vital. There is an ineffable quality housed in material that has value based in desire. As an anonymous professional once echoed to youthful readers: “Anybody who can’t sell a handful of air with a dream in it doesn’t deserve to call himself an American, much less an art dealer.”

This dream is the point where logic fails to subdue an obsession with dissecting the world and shining each specimen until it glows with a radiance of communicable mystery. For Henry, switching out sets of invented diagrams and incremental fades of saturated polymers clears a field for these indefinable aspects of being. Working in a fastidious manner that most have likened to mechanical production and digital aesthetics, Henry ensures that the labor of craft is eclipsed by an etherial sensibility. Each work is likened to a depiction of synaesthetic effect, or a prismatic breakdown. It is unclear what the information leads to though, in such cases as an illustration of crossed fingers over three hovering grey slabs. This lack of conclusion is intentional. Quoth Henry: “You’re getting all the answers and a lot of the questions have disappeared in work we see now. But good paintings have belief systems imbedded in them that question themselves. It is weirdly mystical to be a painter! You have to have fantastical belief that these pigments can create meaning when applied to these surfaces.” 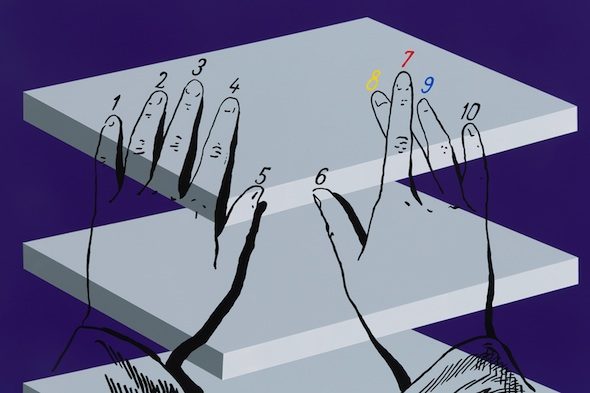 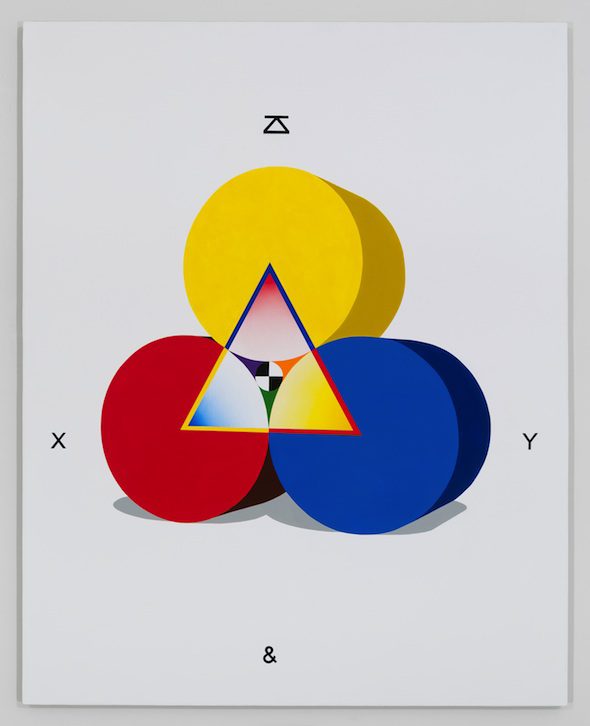 Many of Adam Henry’s constructs share elements with a lineage of scientific mystics. Visualizations that Walter Russell used to describe the equilibrium within a vortex, or gravity’s opposition to radial photon dispersal, can be likened to Henry’s triad of pure color drums floating on a double Z axis. These works tend to focus on the psychology of color, and how to maintain harmony fuelled by tension of equal, yet discrete, components. This balance may be applied to all opposing forces. As Lewis Hyde details in ‘The Gift’: “All cultures and all artists have felt the tension between… the self-forgetfulness of art and the self-aggrandizement of the merchant, and how that tension is to be resolved. ‘The Paper Chase’ may be the best show that ever came to television, but it belongs to a class of creations which will not live unless they are fed large sums of money.” Laboring to create images that exist on the edge of sense has an indefinable value. Hours are lost to coaxing materials into looking as if they’ve assembled themselves. The worthwhile work in this case is to create mystery as much as attempt its solution. Gifts may exist within the marketplace in poised harmony. Alliances of poetic concept and practical existence may be struck, symbolized by radiating bands of color, and a handcrafted illusion floating in pure white space.